By Stefani Dawn
Bear in mind that Rand is not asking to become a full-blown Rock Guide, or even a stand-alone Single Pitch Instructor. First things first, he is simply asking them to allow him to attend the SPI course to both learn and demonstrate his chops.

But Rand is also hoping to go beyond that - offering these guide certification organizations a vision and a unique, experienced skill set that Rand has been developing since about 2011 - when he began climbing again after his spinal cord injury. Rand is offering to share his knowledge and experience as a lead adaptive climber to develop guidelines for how an SPI Adaptive guide could operate and eventually establish an official SPIA certification.  ​​
Rand recognizes and proposes that adaptive-specific guidelines could be established, like having an "able-bodied" certified guide on-site to support trainings as needed, such as setting up anchors in certain conditions, conducting rescues, and physically supporting the client in ways that a wheel-chair bound guide might not be able to readily do.

What would a certified adaptive guide do then? The most important things - set up and safely teach adaptive systems and adaptive climbing basics, lead by example, be a mentor, and provide irreplaceable support to a climber with a disability. There is absolutely no substitute for "I've been there."

So, why not just have an experienced adaptive climber present? Why does it need to be a certified guide?
(2) According to the CDC, there are 61 million adults with disabilities in the United States alone - this doesn't even include children. Some of these people may actually want to learn how to be independent climbers, or even teach others to climb. To that end, any one of us can become disabled in an instant, thereby changing our personal relationship and trajectory for climbing for the rest of our lives.
Upon immediately leaving the hospital in early 2011, Rand began the journey of inquiry, experimentation, and re-learning how to climb. This began by developing his own t-bar system, working with a gym to put up a permanent static line, jugging, and regaining strength. In 2014 Rand began lead climbing again. ​
Rand's new climbing journey included not only how to get into and out of a harness, but also how to get up the wall by placing gear and aiding up. With aiding, climbers usually pound a piton or place a piece of gear onto or into the rock, connect an aid ladder, step up, then reach to place the next piece.

​But when your legs don't work, how do you pull yourself up safely, efficiently, and not lose "ground"? What are the best pieces of gear to use (ascenders? Microtraxions? GriGri? Petzl Croll?  Petz Shunt? Ropeman, Revol? Yates adjustable daisy? All of the above or something else?) How do you efficiently and safely connect and disconnect yourself for the next move? When pull-ups are your only option and you don't have a full-body length to work with, what happens when the wall goes blank, or when there is a bolted aid ladder but you can't reach the next bolt?
Adaptive Climbing Clinic
Rand receives DMs and emails on a daily basis from veterans and non-veterans with disabilities. There are often messages of gratitude for the barriers he is breaking and encouragement to continue, but he is also presented with the question, "How can I do this too?"

Although Rand mentors people 1-on-1, the best way to reach more - to address the demand - is to host a clinic. This has been in the back of Rand's mind for years - hence applying to take an AMGA Single Pitch Instructor course. When Rand kept getting rejected, he started to reach out to local Joshua Tree guide services to find someone who could share the vision.

Erik and Rand have crossed paths in Joshua Tree over the past decade, but their first in-depth interactions began when Rand reached out to find a local AMGA certified guide service willing developing a formal adaptive climbing clinic whose goal is to create independent adaptive climbers.

Erik and his team at the California Climbing School were all-in. Not only did Erik completely respect Rand's abilities as an adaptive climber, it aligned with his personal and business philosophy to bring climbing to marginalized communities.

For example, California Climbing School has a free, guide-run program to introduce local and regional, low-income families to climbing. They have even driven multiple hours to pick up and return families to their homes because they did not have transportation. California Climbing School also offers free and deeply discounted youth programs and partners with local schools to engage at-risk students in climbing.

After Erik met with Rand to learn more, he, wife and co-owner Tee, and his team of guides were willing to volunteer about 40+ hours of their time to receive additional training from Rand and to help with an adaptive climbing clinic there in Joshua Tree. 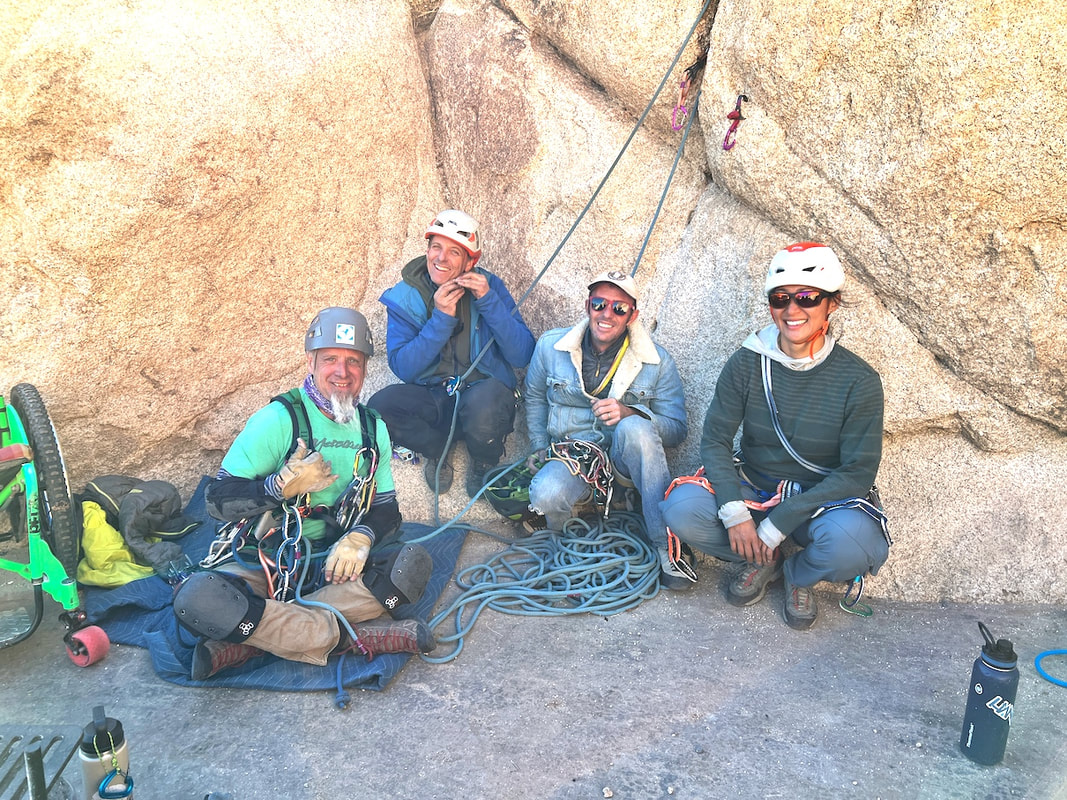 The goal of this clinic was skills development for all involved - the guides, coaches (experienced able-bodied climbers who want to learn adaptive climbing techniques), and the adaptive athletes. 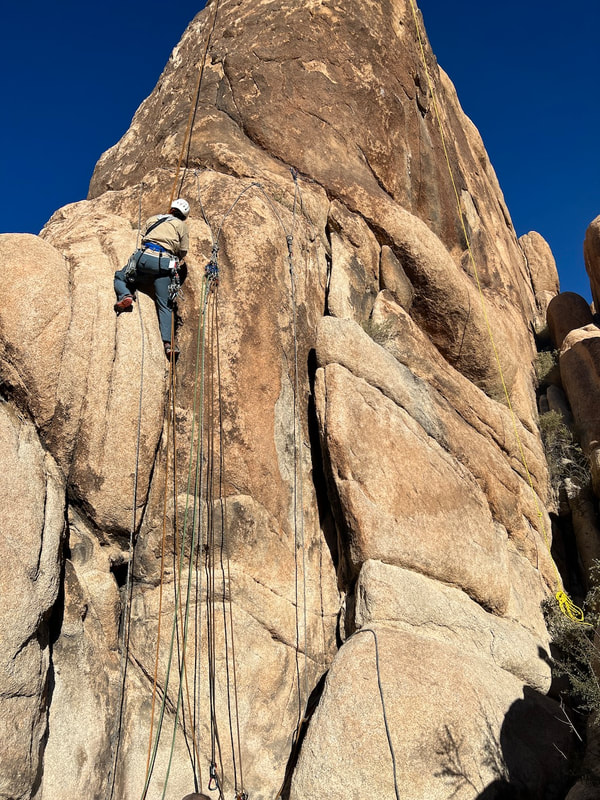 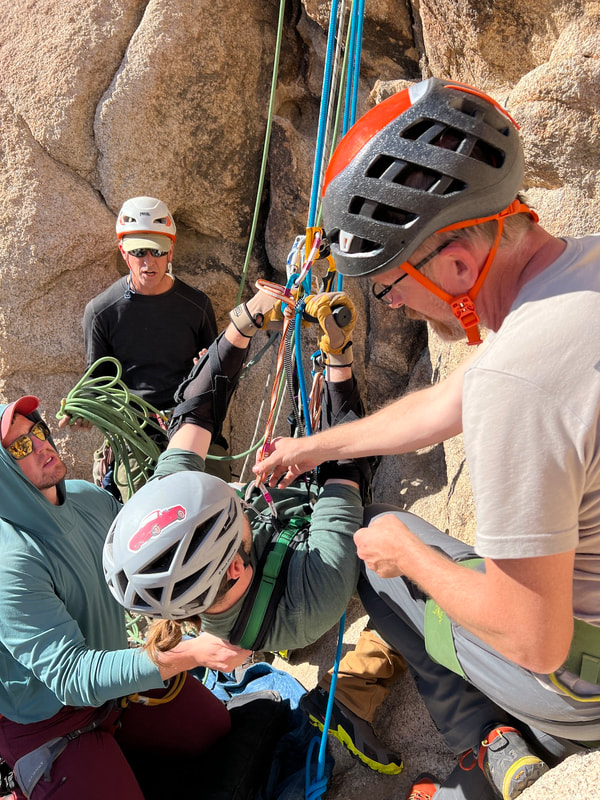 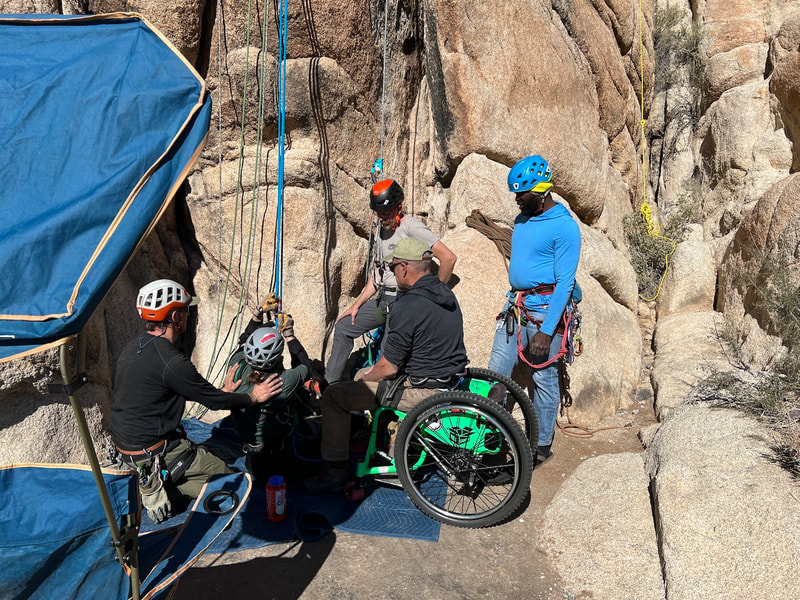 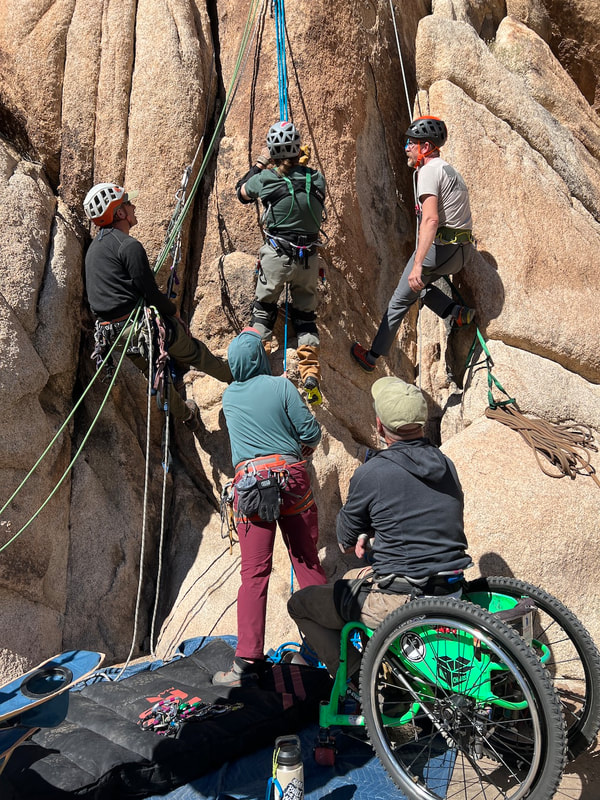 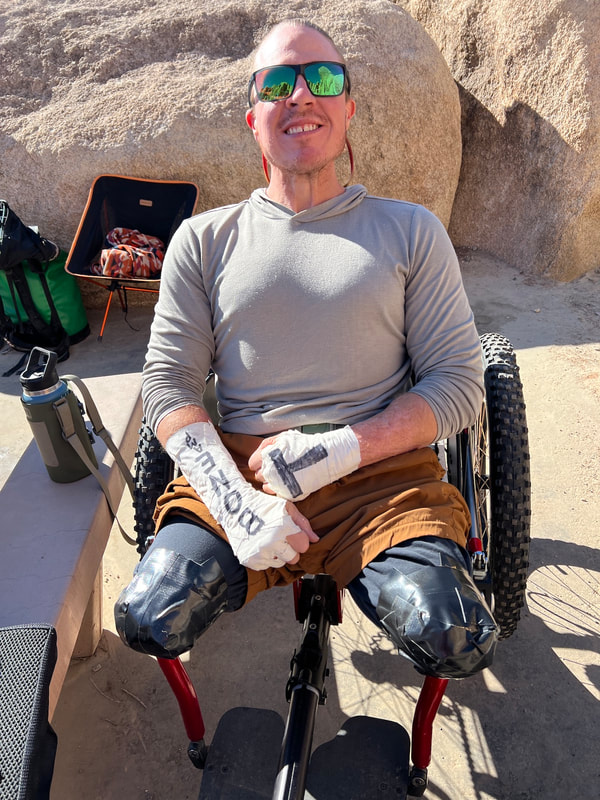 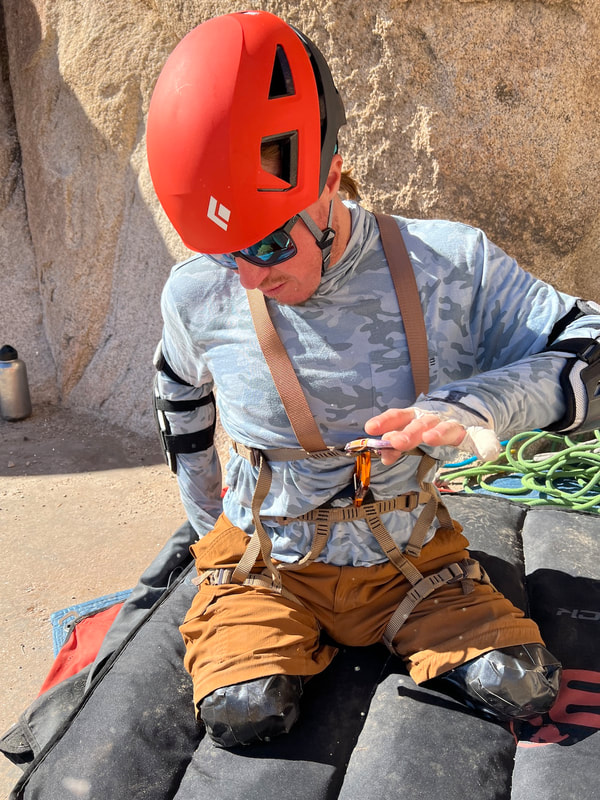 (Above: Click on photos to enlarge and see caption. Photo credits: Stefani Dawn)
With guides and coaches side-by-side with the participant, and Rand as the "ring-master," the clinic developed a team of trained guides and coaches who will be able to skillfully support future adaptive climbing clinics. It also broadened the number of people in the climbing community who have climbed with, can advocate for, and can support adaptive climbers more generally.

Most importantly though, each adaptive climber obtained a foundation of skills and personalized systems that will eventually enable them to climb independently. Some of the climbers, will need some follow-up training to reach the point where they can show up to any climbing group and say, "let's climb," but others who already came to the clinic with climbing experience prior to their injury, are now able to confidently take their climbing to a new level.
Now imagine if that person in the wheelchair pulled out thier own gear, assembled it - perhaps asking for a little help here and there - and then told you exactly what needed to be done to help them get on the wall. Would you do it? How would you feel?

Many would be absolutely excited about it.

It would also likely completely shift perspectives of those seeing this independence, moving a frame of mind from "a person in a wheelchair is 'dependent'" into "this is a person with skills that I can learn from." It is empowering for all involved.

That is Rand's vision.

The workshop that occurred back in November was the first, so naturally, the team understood that lessons would be learned and refinements would be made for future events. Although adjustments have been identified, all involved felt it was a resounding success.

I'm absolutely blown away by the experience I had this weekend coaching at the adaptive climbing clinic in Joshua Tree. The amount of laughs and skills learned are immeasurable." 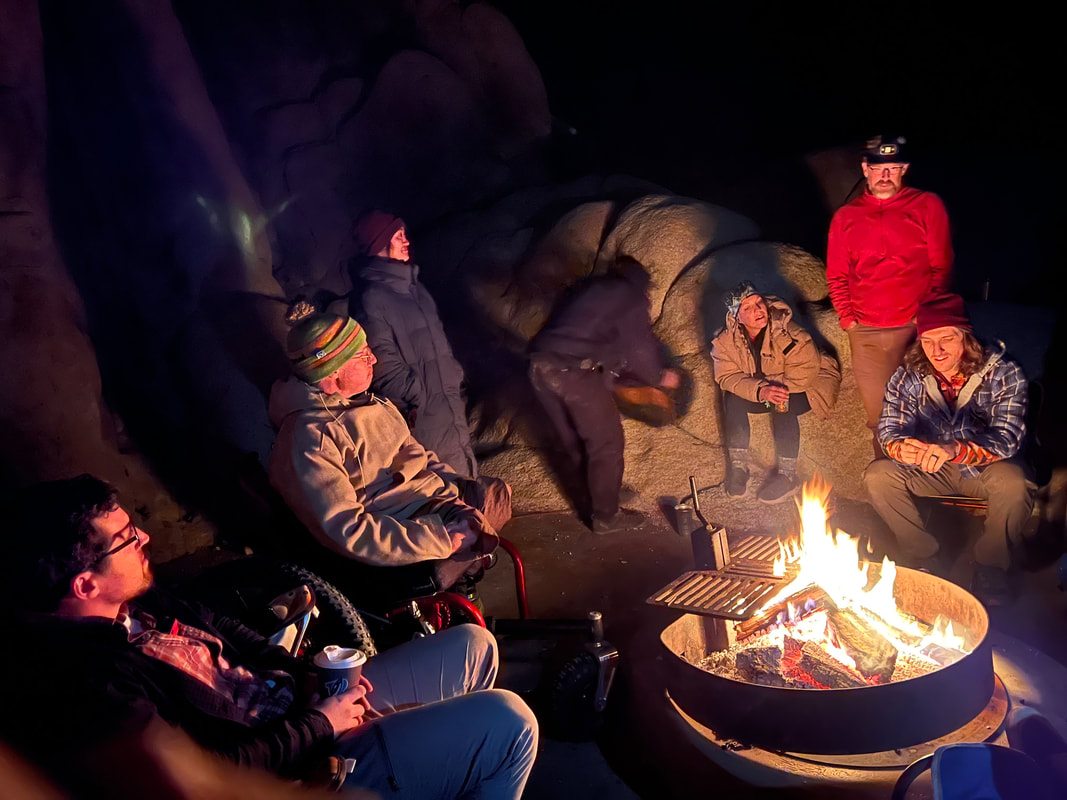 Fireside conversations during the adaptive climbing clinic at Joshua Tree National Park. (Photo Credit: Stefani Dawn)
Everyone understood that a two-day workshop would not achieve the ultimate independence goal for all participants, but it would provide a good foundation. Ultimately an individual system was dialed in for each climber. In terms of refinement, it was recognized this may need to be a three or four-day event instead of a two-day event, to allow each participant to repeatedly practice their system 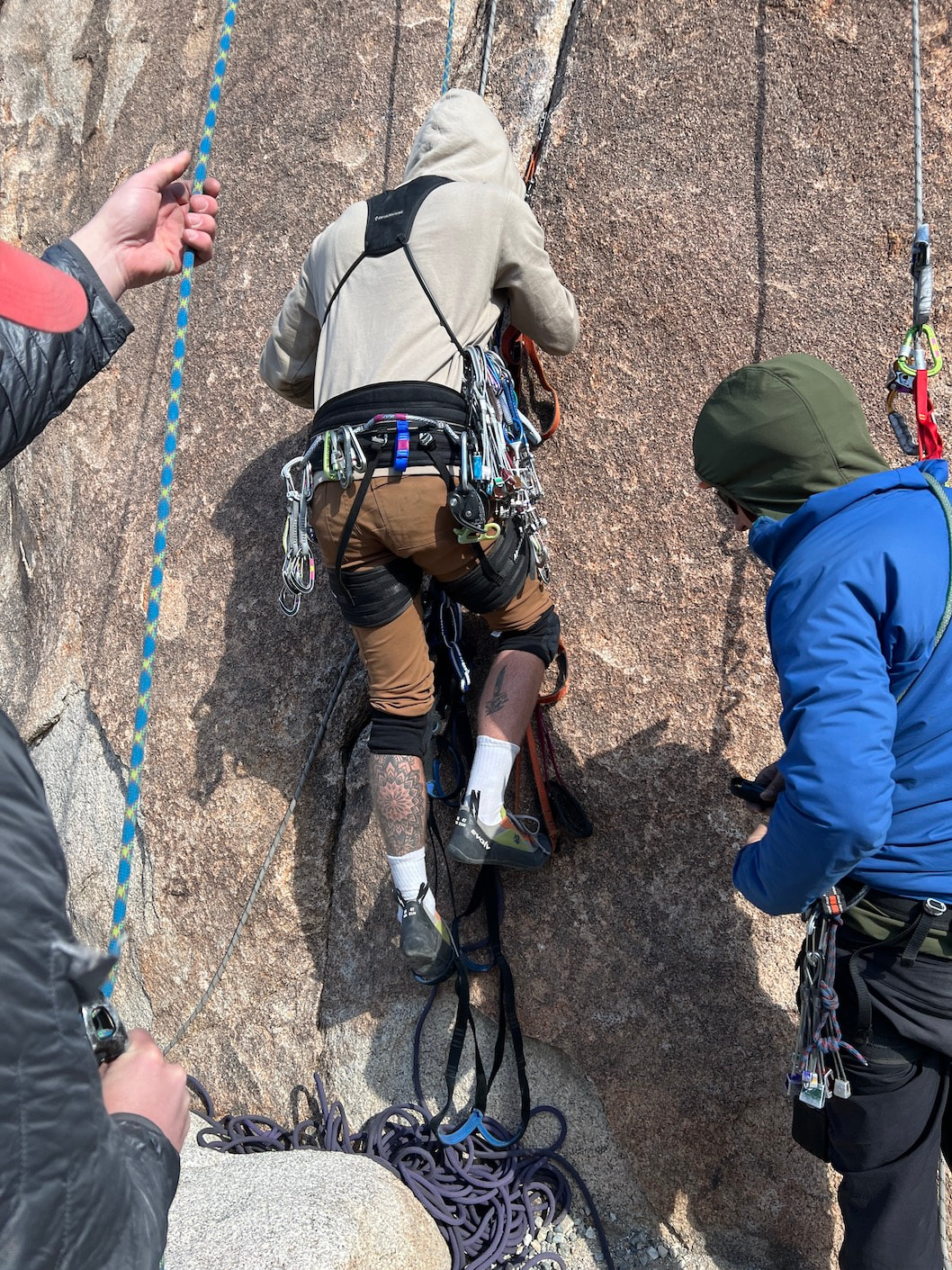 Adaptive climber Jack Ryan learning how to lead aid climb. He is placing and testing his gear with a top rope back-up. (Photo credit: Stefani Dawn)
For now events will be focused in Joshua Tree, California and supported by the California Climbing School. But, as the clinics get dialed in, and more guides and coaches are trained, Rand has a vision to be able to offer clinics in other locations in the U.S.

And, what about Rand's own official certification as an AMGA guide? Well, as a fully-certified AMGA Certified Rock Instructor, Erik is going to do the full Single Pitch Instructor training and testing for Rand. AMGA may not give the "official" certification to Rand, but he will have at least fulfilled all of the requirements.

Then, Rand and Erik are going to move forward with developing all the components needed for an SPIA certification, including the manual, skills, expectations, course, and testing required to receive such a certification. AMGA and/or PGCI would then be invited/have the opportunity to adopt it into their rock climbing certifications.

One would hope that these agencies would see the benefits of having such a certification. But, no matter what, Rand will find a way to go around - or just go over - the speed bumps thrown his way.
ADAPTIVE CLIMBING COALITION

MISSION: Revolutionizing adaptive climbing through self empowerment, education and community
To learn more about upcoming events and to support the process of developing the first Single Pitch Instructor Adaptive certification contact the Adaptive Climbing Coalition, a new non-profit being formed by Rand Abbott (Founder/President) and Joe Gaston (Co-founder and CEO)