By Keith Bell
​​In 1970 I was the lone Australian climber in Chamonix. Not into soloing, I was told that the Bar Nationale in town was the place to go to find suitable climbing partners. However, I was a square peg trying to fit into a round hole. Hopeless at darts and table soccer, the only thing left was drinking alone, nursing a half full glass, and avoiding Maurice, the irascible publican.

It seemed being an Australian coming from a reputably flat, dry, featureless country without any apparent climbing history did not seem to attract many good and reliable climbing partners in Chamonix. Unfortunately, Mountain magazine had also just printed an article by John Ewbank describing his climb on the Totem Pole in Tasmania. This set the yardstick by which I would be judged.

“Have you climbed the Totem Pole?" prospective climbing partners would ask.

“No.” The next moment I was speaking to somebody’s back. It did not seem to matter that the Totem Pole was over 1,000 kilometres south of Sydney with its own particular access problems.

My tent was set up in Snell’s Field, about two kilometres up the valley from Chamonix and within sight of the small village of La Praz. It was located just before the bridge that crossed the Arveyon River, which flowed out of the snout of the Mer de Glace. Snell, the owner of a local climbing equipment shop, kindly allowed British and other climbers like myself to camp there gratis. My neighbours were twins, Alan and Adrian Burgess - experienced Brit alpine climbers - and they were very helpful in many respects.

The first thing I needed to attend to after shelter was something to eat. The twins pointed me towards the local supermarket. I eventually found it and one of the things that I searched the shelves for was oats or porridge. At the time, back home, this was the staple breakfast cereal - a product of our British, and maybe convict, heritage, I guess. But after combing the shelves several times, I could not find it anywhere.

Eventually I saw the manager and went up and asked him where I could find this particular item. He took a pace back then looked at me in absolute derision and disdain declaring: “Only Englishmen and horses eat oats!!!” He then stomped off.

I considered myself well and truly told and made my way to the fridge for some yoghurt and cheese followed by a baguette. It seemed like I also had a target indelibly printed on me, which was distinctly English. There did not seem to be much love lost between the English and the French in Chamonix.

Drinking alone, camping alone, rain pelting down; my luck suddenly changed, sort of. The Burgess twins had a mate turn up who was also looking for somebody to climb with. I was introduced to "Binks." Intrigued, I had to ask: “What’s your real name?” Silly question. “Binks” was the quick reply.

So, I set out on my first climb with Binks, a Brit climber of unknown quality and a questionable name. Our chosen destination was the East Mer de Glace Face of the Grepon – a long but easier Chamonix classic.
Somewhat sensibly, we were going to rope up on the refuge ledge given the heady combination of height gained, pack weight, and big alpine boots. From the ledge there was about a three-metre climb down to the traverse line. The first Japanese climber started down with a heavily laden pack. He slipped but landed upright on the small ledge defining the start of the traverse. He teetered, momentarily, but his heavy pack continued to drag him backwards. To my astonishment, he went cartwheeling into space. We all stood there in silence – mesmerised. ​

It took several minutes for us to realize what this meant and regain our composure. A rescue - or more likely recovery - was required, and we thought "alpine ethics" dictated that Binks and I should take part. The other Japanese climbers set up abseils and we went down with them. Their companion had fallen into the bergshrund and was out of sight. Once on the snow, they set up an ice axe belay and one of them descended into the bowels of the slot. A voice called out from below – “he dead.”
​About forty-minutes later we heard the sound of a chopper and then watched it head for and land where we had left the Japanese group at the base of the climb. About ten minutes later the chopper flew off leaving an empty expanse of snow. Binks and I looked at each other; not a word needed to be said. We began the long trudge back to Montenvers then down to our campsite in the valley.

Not to be dissuaded by this tragedy, Binks and I teamed up again. This time we decided to head for the classic one-day route; the South Face of the Aiguille du Midi, first climbed by Gaston Rebuffet and Maurice Baquet in July 1956. 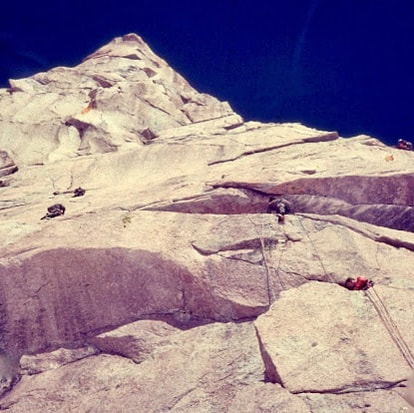 Looking up the South face of the Midi from the bottom. "It was not the famous S-crack that hovered menacingly above that worried us, but the hordes of German alpine troops that festooned the route." (Photo Credit: Keith Bell)
Around 1:30 p.m. Binks and I finally began to climb. The S crack was clear by this time, but when I reached the ledges above, they were packed with German troops. With some quick thinking, Binks and I cooked up a strategy to break through the log jam above. I would lead with minimal protection and move past the occupied ledges to belay in the crack or groove above. This would effectively block the route and give us the lead on the next section. I would then bring Binks up to the ledge to belay with the Germans. The tactic could then be repeated.

It worked wonders and we were making remarkable progress passing the hordes of reluctant soldiers and moving quickly up the route.

At last, a rightward sloping groove led to a shoulder, which seemed to be the end of the climb. As I was nearing it’s end, a jackbooted German officer with a luger in hand stepped across in front of me barring the way. Well, he was an officer at least and he uttered a rather firm and guttural “Nein!!!” Stymied above, I glanced across at the wall on my right, it was steep and unprotected, but I reckoned it would go. Anyway, my blood was up. "Bugger you!" I thought and launched across and up the wall. The officers mouth gaped as I gained the shoulder, belayed, and brought Binks up.

It got messy again.

A short abseil was required into a couloir, the couloir then led up to the main gallery of the Midi station. However, the system that the Germans had set up to protect it was slow and laborious and I was again caught behind yet another platoon. At the bottom I organized the ropes so that the Germans could move quickly and efficiently.

Suddenly, Captain "Nein!" appeared on the skyline and abruptly ordered his men to resume their former complicated and time-consuming system. By this time, I was really pissed off and just climbed on up the couloir until I reached rock.

Just above was an off-take tunnel from the Midi station. It was large, sheltered and expended warm air. I tied off the rope for Binks, as he had decided to foster Anglo-German relations below - perhaps he had spent too much time with them in the trenches?

The tunnel was very welcoming; I took out some food and water to make up for the deficit of the day. Outside the light was fading fast and now a storm was threatening. Soon it was dark, snow started to fall and the rising wind began whipping it into stinging flurries. Down below there was a kaleidoscope of flashing torches and occasionally, above the wind, people could be heard shouting. It looked like mayhem - and it was. Seemingly hours later a stream of tired, disheveled Germans began moving past my warm bunker up into the galleries of the Midi. Towards the end, Binks was finally one of their number. 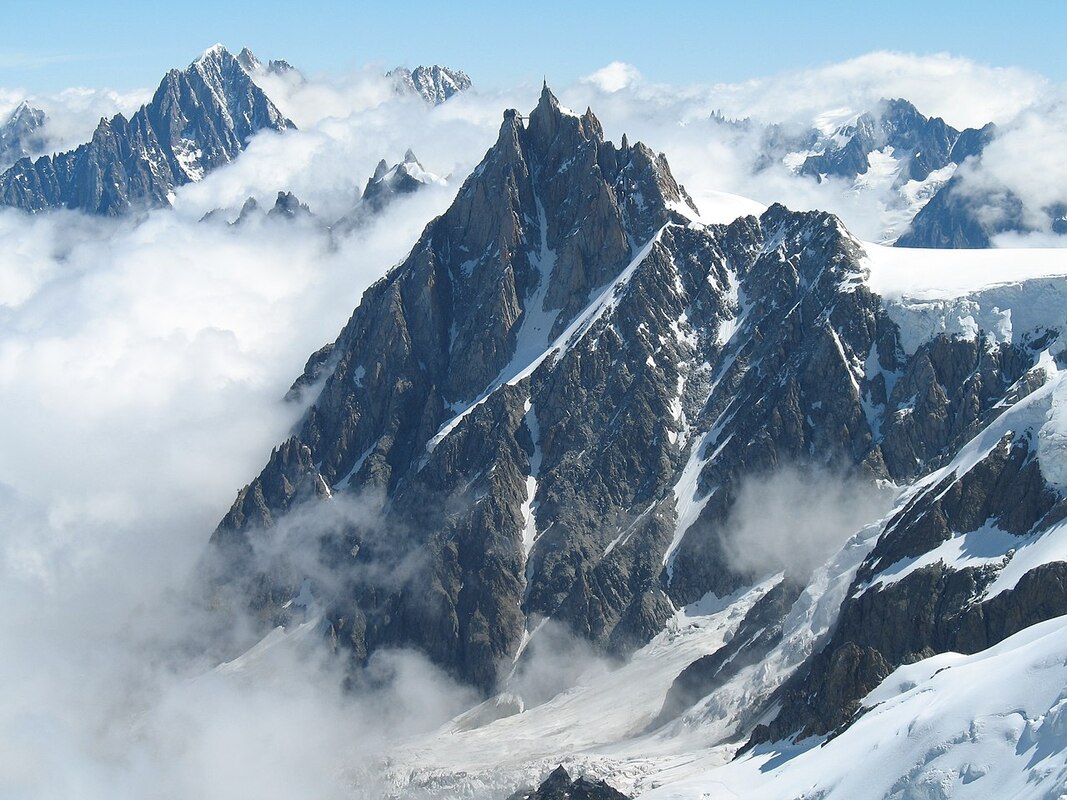 By early morning, the thunderstorms had dissipated but at first light heavy snow, accompanied by a violent wind, still whipped around our alpine citadel. The powers-that-be had decided to run one phrique for the day to get rid on their resident "guests." At the appointed hour we all packed into the cabin.