By Stefani Dawn
You may have heard of “decking.” This describes when a climber falls and hits the ground or large surface like a ledge. No climber wants to deck. In fact, this is probably the number one fear of climbing.

But, why do some route setters place bolts so far apart on a climb such that, if a fall occurs before the next clip, the result is body-meets-ground?

There are multiple reasons this occurs:
The frequency with which I have encountered deck-potential bolted climbs has been enough that I always visually inspect the location of bolts. Generally, I look at the placement of the first, second, and third bolts (details are provided below regarding what to look for). The risk of decking is not limited to the second and third bolts, but it is often difficult to see and judge bolt placement higher in the climb. I often find that if a route is well protected close to the ground, it is also going to be well protected higher up. Remember, whenever there is a large ledge, the same bolting rules apply as from the ground.

++ Remember, a lead fall will be AT LEAST twice the distance of the last clip. That means that if you are 5 feet above your last piece of protection, you will fall a minimum of 10 feet. I emphasize minimum because rope stretch, slack from the belayer, belayer movement towards the wall, and the amount of rope you have pulled out getting ready for the clip, will all add distance to the fall.++

Here is how to inspect bolt placement:


FIGURE 1 - Bolt Placement and Ground-Fall Potential *
*NOTE: This illustration assumes no additional slack in the system (e.g. no rope stretch, no pull rope to clip, etc.) 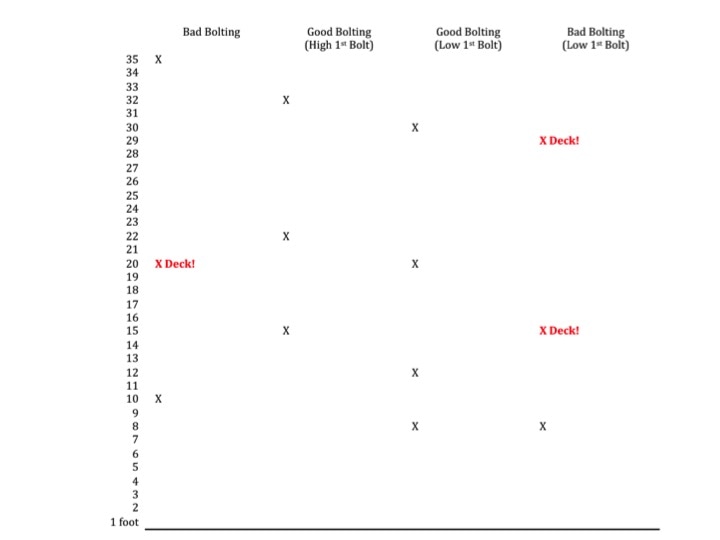 Things to keep in mind: