You live on the east coast of the U.S. (in the Washington DC area), tell us about climbing in this part of the country.

The climbing around the immediate D.C. area is really not the best quality. There’s a few regional classics but mostly you need to get pretty far from the city to get to the good stuff. If you’re willing to make the drive, The New River Gorge is only five hours away and has some of the best rock I've climbed on. Slightly closer is some good bouldering in Pennsylvania, most notably Mt. Gretna. The rock at Mt. Grenta is diabase, which is incredibly friction dependent, so the climbing is really good when it's cold but gets nearly impossible to climb in the summer months. 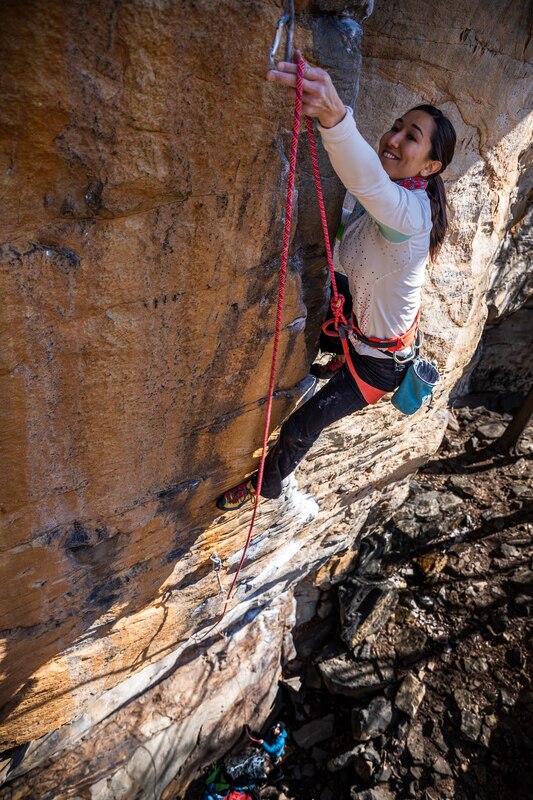 Sarah Micheals on Psycho Wrangler (12a) at the New River Gorge, West Virginia.
​You have photos from lots of different areas that aren’t the typical or popular spots, which I think gives some fresh perspectives. Tell us about the places where you take photos.

Most of my photography has been at The New. The climbs there are known for big moves and bold runouts which I think makes for really interesting shots. Nothing brings out the emotion in a climbers face like committing to a deadpoint with the last clip well below your feet.

Another area I take a lot of photos is a small area called Coll’s Cove. It's a bit of a hidden gem tucked away in southwest Pennsylvania. The climbing is a great mix of slopers and crimps. It's hard to take photos here because of the dense trees limiting how far I can stand from the climber. I tend to have a tighter frame around the climber when taking photos at Coll’s for this reason.

Sara Denison-Johnston at Coll's Cove. The climb is Like the Dickens (V7) 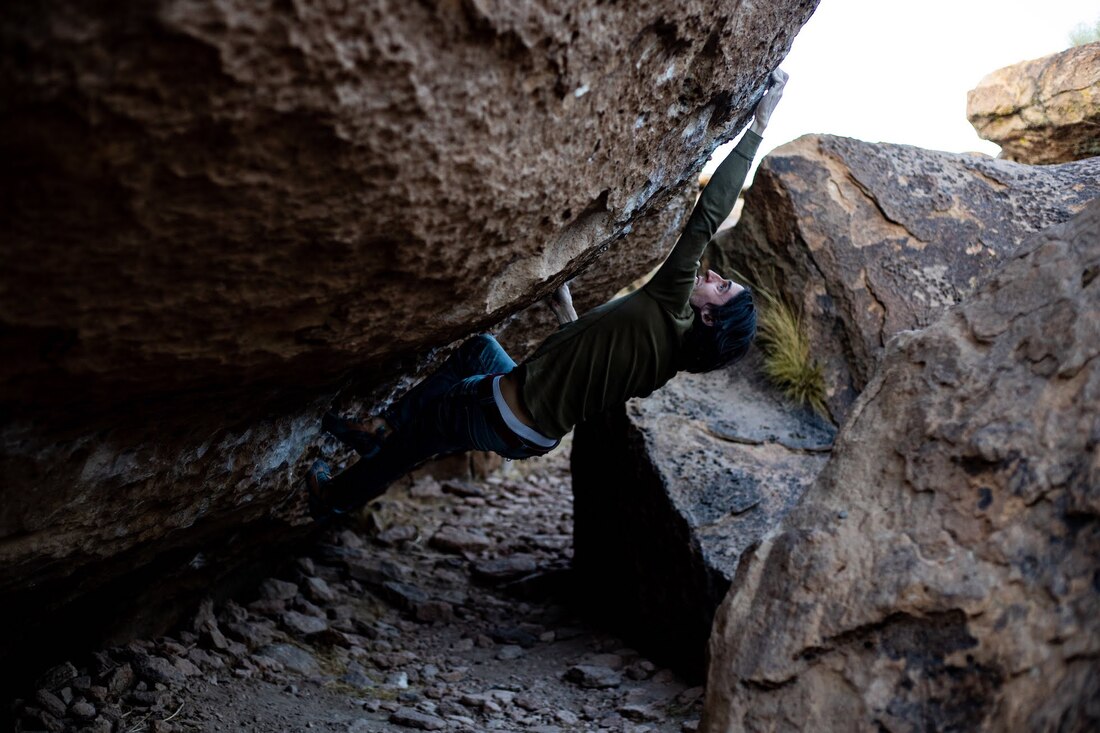 Chris Fogarty on Cholos (V9) at the Happy Boulders in Bishop, CA.
​What’s your background in photography? How did you learn?

I think I first became interested in photography while taking photos of my girlfriend at the time with her phone for Instagram. From there I met a few photographers, talked to them and got my first camera. My friend Sara taught me a lot of the basics and I spent hours on YouTube. And, even more time behind the lens making mistakes and trying my best to learn from them. I know I still have a lot of mistakes left to make. 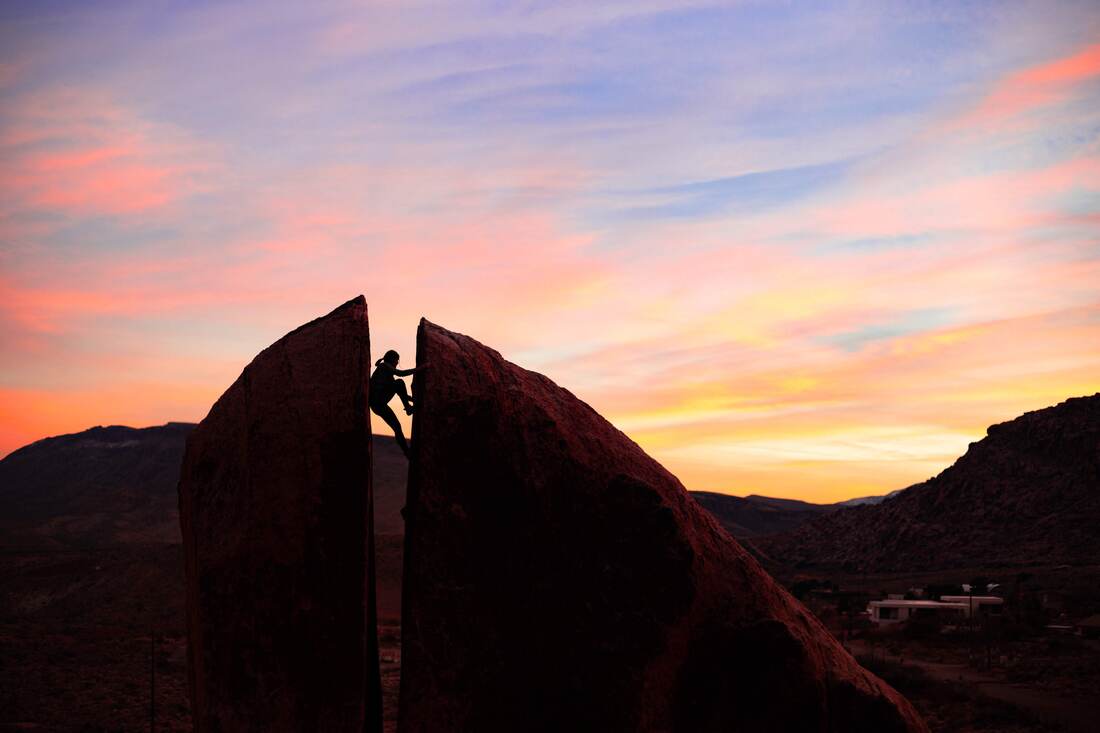 Plumber's Crack in Red Rock Canyon, Nevada.
​Have you experimented much with different types of cameras or lenses? How did you find the equipment you like?

I've only ever used Canon because that was the cheapest DSLR I could find on Craigslist. Since then I've bought a few lenses and a new camera body, mostly relying on reviews on YouTube to guide me in what would be worthwhile. 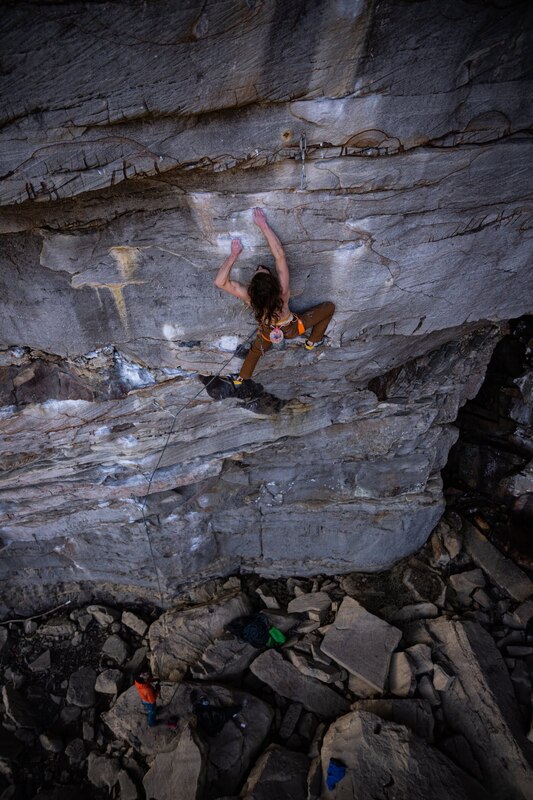 You also have photos outside of the East Coast. Do you travel?

I’ve had the benefit of being able to travel quite a bit this past year. The highlights are my trips to Bishop and RedRocks. I'm hoping that in 2020 I can travel to a few more destinations. Squamish, Joe’s Valley and Hueco Tanks are high on my list. 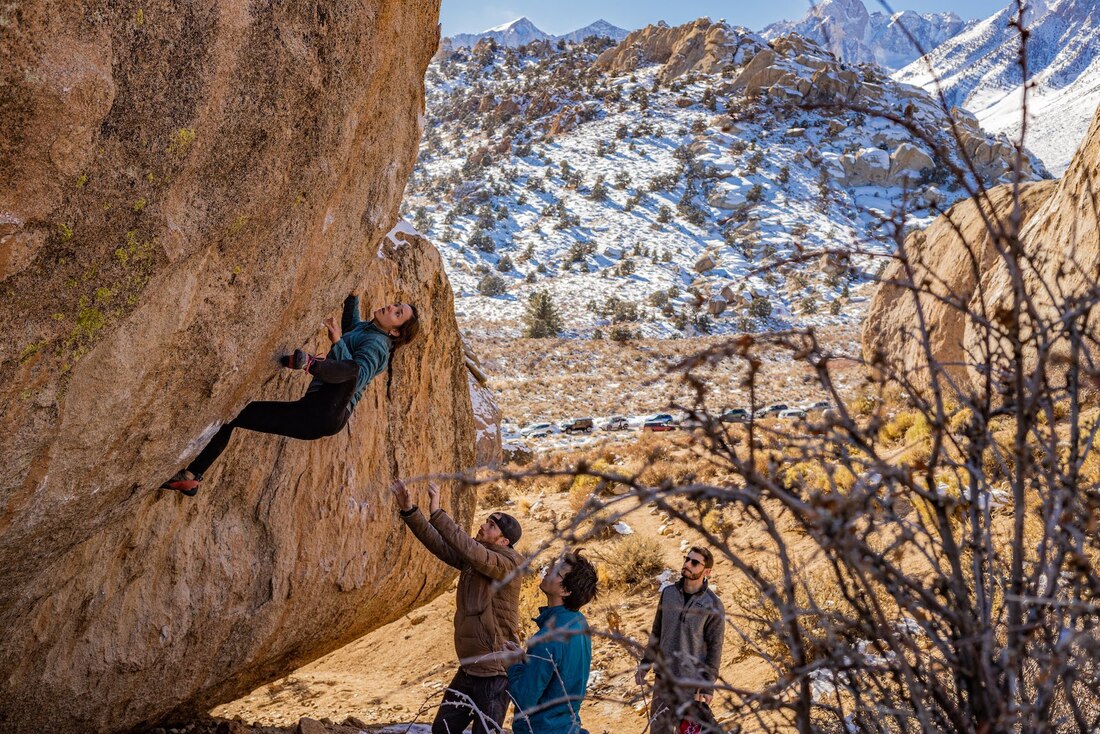 Sara Denison-Johnston on High Plains Drifter (V7) in the Buttermilks, Bishop, California
How has the CoVID-19 pandemic affected your photography and climbing?

CoVID has definitely had a major impact for me. The gyms are closed and I can't travel to my favorite destinations to climb. I've even heard stories of local crags being shut down by landowners and land managers. I'm just spending a lot of time training on my pull-up bar and hangboard in my room. Hopefully I won't get too weak during all of this!

As for my photography I was lucky enough to predict that I wont be able to get out and shoot so I saved up the photos from a couple of trips so that while I'm locked away my house I can edit those and I might even go back to some older photos and re-edit my favorites in more of my current style. But no matter what it's going to be challenging to not be able to get out there and shoot for the time being.
​ ​What goals or visions do you have for yourself?

My number one goal is to be able to climb and take photos for many years to come. I hope to experience and photograph many more destinations in that time. Having one of my photos published on the cover of Climbing or Rock and Ice would be pretty awesome too.
​​
​What one thing would you like the Common Climber audience to know?

I just want to give a huge shout out to all my friends that let me take photos of them! I seriously have the most supportive friends. If it wasn't for their encouraging words and constructive criticism I would have given up long ago. So thanks everyone! Seriously love you all!
IG: stephen_smithb