By Emma Renly
A photo of the original pink tricam... 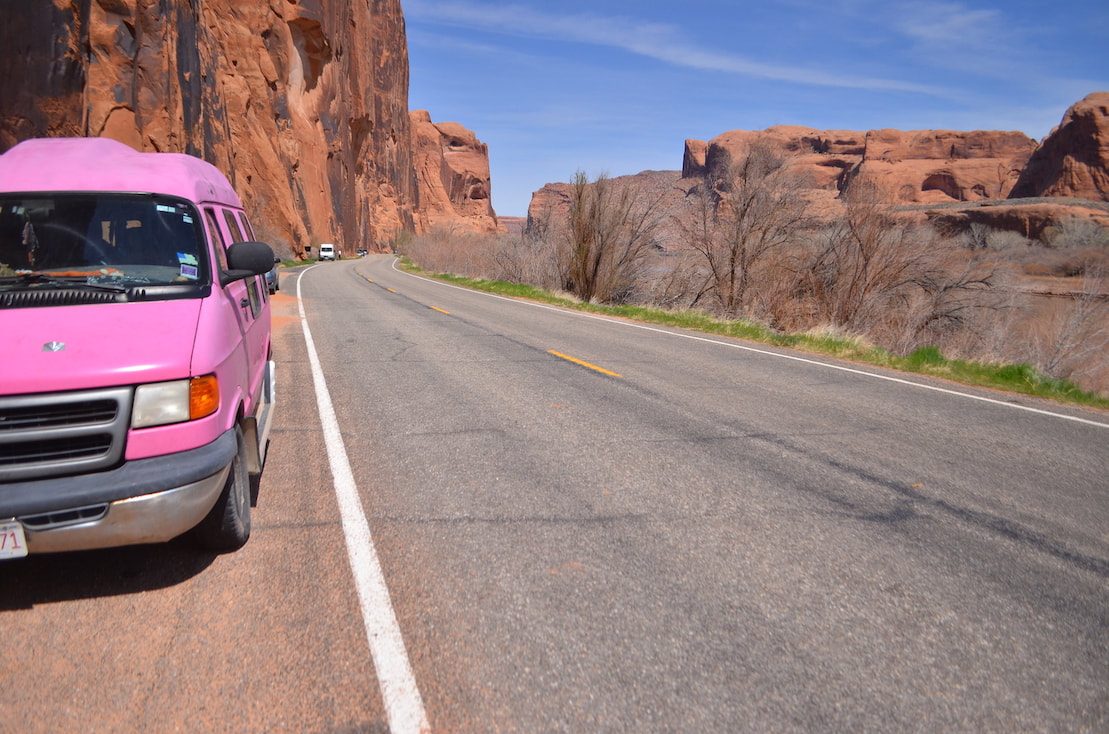 A view down Wall Street in Moab, Utah
​I recruited a friend for a belay, some trad gear, and expertise. As I began racking up, the realization hit me that I did not know HOW to rack-up. This is a small part of the trad climbing routine, but one that is often overlooked. Since most cracks vary in size, it requires different sized pieces on your rack (which is often the harness) placed in such a way as to immediately be able to grab a specific piece of gear.

​Without a thought to the weight-convenience ratio, I put a yellow number 3 cam next to a quick-draw next to green 0.75 cam next to… a pink tri-cam. While racking up with a singular tricam seems unusual, my friend swore by that piece. He had bootied it off another climb and said it had helped him in many desperate situations – in fact many-a-trad-climber swears by the pink tricam. In my friend’s eyes, the greatness of this pink tricam was comparable to a Black Totem.

So after re-racking multiple times, upon my belayer’s suggestion (including with the pink tricam), I was ready to send (I was not). Before my feet even left the ground, I felt absolutely gripped to start the climb.
The next ten feet consisted of laybacks, which I nearly slipped out of. The crack was too thin to traditionally jam, so I used the tips of my fingers and heels of my feet to keep directional pressure against the 90-degree wall. My belayer was yelling, “KEEP YOUR FEET UP EMMA!”

“AHHHHHH,” I responded. Despite not wanting to continue, I continued. My eyes were set on the wide ledge for the next rest.

Realistically, I was only about 20-feet up on this 80-foot climb, but the entire taxing scenario had taken about 30 minutes. On the ledge, I had some time to think about which trad piece I wanted to place next, as well as question why on Earth I liked climbing. The crack above me was still thin - too narrow for any of the cam pieces dangling from my harness.

Then I remembered  the pink tri-cam.

This small piece of passive gear would both be my saving grace and my downfall. The tricam is placed differently than traditional cams and requires a bit more fiddling, especially without prior experience in placement. I played around with it for a bit, trying to hit that sweet spot for it to be cammed in the crack. My belayer was in fully aware of my incompetence.

“I JUST TOLD YOU HOW TO PLACE TRI-CAMS EMMA,” my belayer yelled from the ground.

“I DON’T REMEMBER,” I yelled back.

​Time ticked past, and in what felt like forever, the pink tri-cam was finally placed in what seemed like an excellent position. It looked cammed-in to me. Still, the rest of the laybacks loomed above.

"EMMA YOU NEED TO FINISH THE CLIMB RIGHT NOW BECAUSE I HAVE TO MEET A FRIEND AT THE BAR.”

After an internal struggle between my ego’s desire to complete this first trad climb and the realistic notion that I was not ready to lead trad, I knew I needed to be lowered to the ground. I was done for the night. Too nervous to lower on a single unknown tricam, I fiddles with a regular cam to - sort of - serve as a backup. With my friend shuffling below, I gave up and decided the passive tricam was good enough to be lowered on by itself.

Luckily, both pieces stayed in place.

30 Seconds Over Potash
One I arrived on the ground, my belayer pulled the rope through, hopped on the sharp end, and danced through the climb in about... thirty seconds. He stopped and paused at the placement of the pink tricam. “HEY THIS PLACEMENT IS PRETTY BOMBER, EMMA!”

"Hooray!" I thought to myself, mentally celebrating one positive aspect of the lead attempt.

Despite feeling absolute embarrassment at the 30 Seconds Over Potash experience, I set a goal of being able to lead trad – and I did it -  through many pitches of blood, sweat and literal tears. No exaggeration. A year later, I was back below 30 Seconds Over Potash looking up at the anchors. This time, it was with my own gear racked up on my harness and the pre-climb jitters were nowhere to be found. This climb was now my warmup.
​
While I’ve thought about investing in my own set of tricams, I have yet to make the investment – so the pink tricam still awaits. It feels like in order to match the level of my friend’s piece, the pink tricam needs to find me.

Even with the shortcomings in my rack, I finally danced up the route and haven’t looked back since.