​Maple Canyon, Utah
"This One Makes You Taller"

By Maggie Odette
“I knew who I was this morning, but I've changed a few times since then.”
― Lewis Carroll, Alice's Adventures in Wonderland

I’ll start at the beginning.

One morning about 12 years ago, I drove right on past what had been my office for 13 years, and didn’t stop until I pulled into a parking spot at the lake a mile later. I had no idea how I’d arrived there, no recollection whatsoever of the drive. I was as far from being present as one could be. Later that day, I gave my notice. I was 37 years old. It was time for a shift in priorities. I’d been rock climbing for almost 10 years, and had just redpointed my first 5.12.

It turns out that when you fully invest yourself in something, there’s a good chance you’ll get better at it. Add in a consistent partner who drags you around to crags where the warm-ups are at your current limit, and you’ll improve even faster. I proceeded to earn a letter grade each year, progressing from 5.12b to 5.14a over the next seven years. By then I was 44. I had fallen in love with the redpoint process, and the partner, too. And at some point along the way, I’d realized that I only liked to climb on routes I really wasn’t sure I could do.

Maple Canyon, located pretty much smack dab in the middle of the state of Utah, is to home the Pipe Dream, a gigantic cave chock full of long, steep routes that meet the aforementioned “not sure I can do” criteria. Charlie, my now-husband, introduced me to the cave in 2009.

​I was baffled by the cobblestone conglomerate that formed the odd, lumpy formations we drove past on the Forest Service road accessing the canyon. I climbed on the gently overhanging left flank of the Pipe Dream that day, but vowed that one day I would be in the steeps with the cool kids. Near the end of that year, I moved into Charlie’s home in Ogden, about 2½ hours from Maple Canyon and the Pipe Dream. I paid my dues, working my way up through the grades, slowly moving from the fringes into the cave proper. We climbed at some of the limestone and basalt crags further north as well, and my bag of tricks began to fill up. 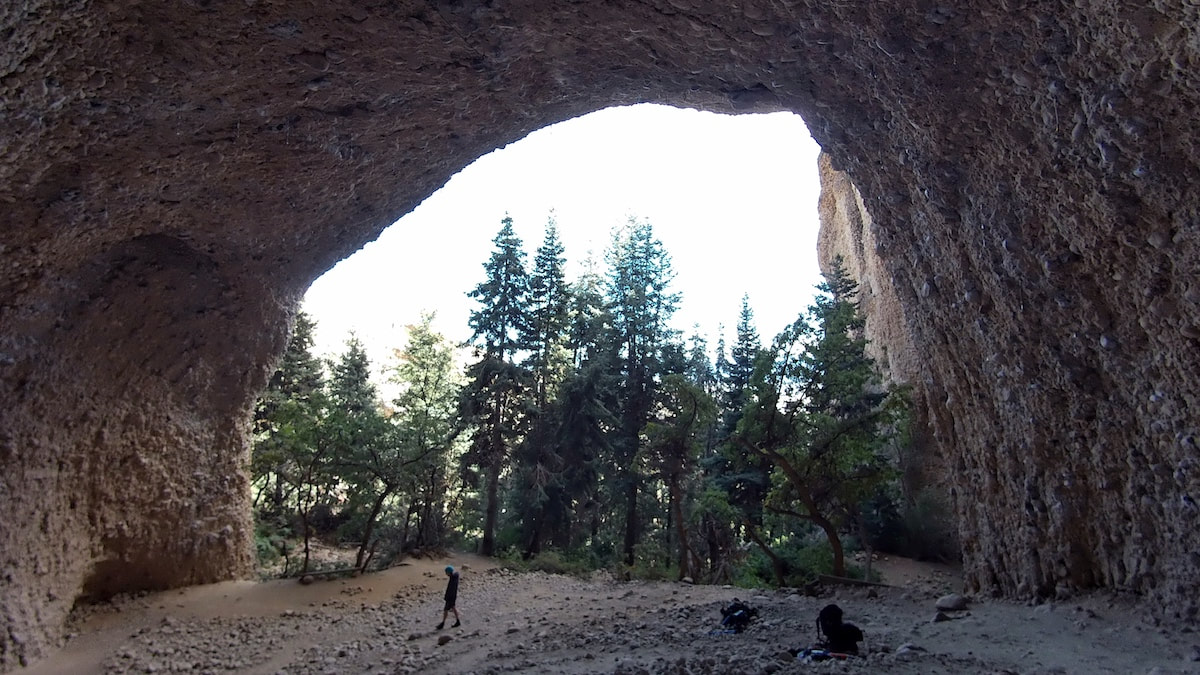 We were ready to get to work but, to our dismay, winter overstayed its welcome. Our bundled up rest day yoga looked like snowman calisthenics.

Cold, damp conditions relegated me to belay-only status for several would-be climbing days, so an early season send of Eulogy (near the end of June) took me quite by surprise. It wasn’t the “Wow, I didn’t expect that” kind of surprise; it was the “How the hell did that just happen?!” kind. And when it happened, I had to decide what was next.

​The logical progression was to seize on my familiarity with Millennium and try T-Rex, Eulogy’s more difficult sister extension.
Of all of the routes in the cave, T-Rex was one I had put on a shelf somewhere in the recesses of my mind. I was intimidated watching other, stronger, climbers sail through the air and swing off of what were supposedly jugs up there. Word was that the moves favor taller people (it’s true), and that only a handful of shorties had been successful on it.

And there was all the talk about the grade. Easy 14b? Hard 14a? Did I want my first of the grade to be a slash, or “low in the grade”? Did I even care? I wasn’t convinced I would even be able to do the crux moves.

There is strategy involved in climbing an epic endurance route. Break it down into pitches, train the rests, manage the pump.

I call it the “tapas” method: small bites, tiny goals. 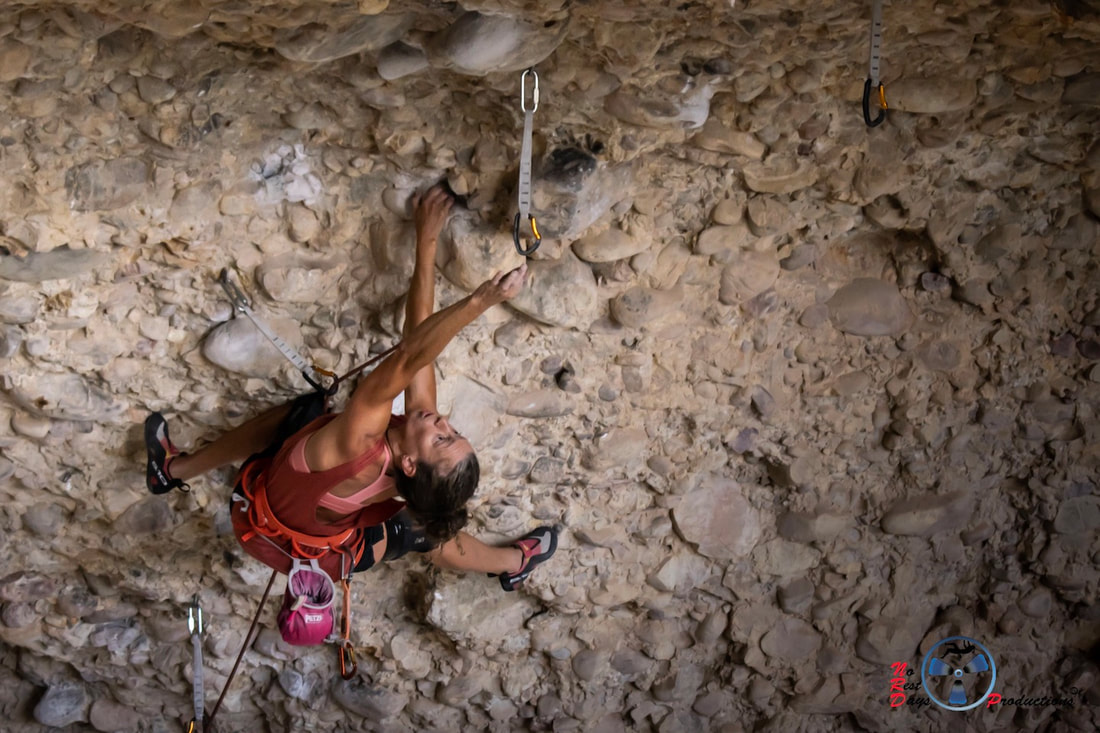 Photo Credit: Zoltan Papp (No Rest Days Productions)
The first order of business was to see if I could even do the moves at all, so I started trying the easiest variation that shares the extension, Rodeo Clown (13b). It climbs an 11d, then angles out the roof via a juggy rail to arrive at the beginning of the T-Rex crux. I’d used this first chunk of climbing as a warm-up in the past and checked out the next bit a couple times, so I already knew that body mechanics and reach wouldn’t allow me to do the crux with the “standard” beta. I’d have to find my own way.

Sometimes being smaller actually is an advantage, but this was not one of those times. I ended up settling on an uber-technical kneebar that allowed me to navigate a sharp right hand hold and reach a slippery left hand to set up to sail to a large in-cut edge, then was able to do the rest of the moves through the next foot-cutting hero-huck to a huge jug. 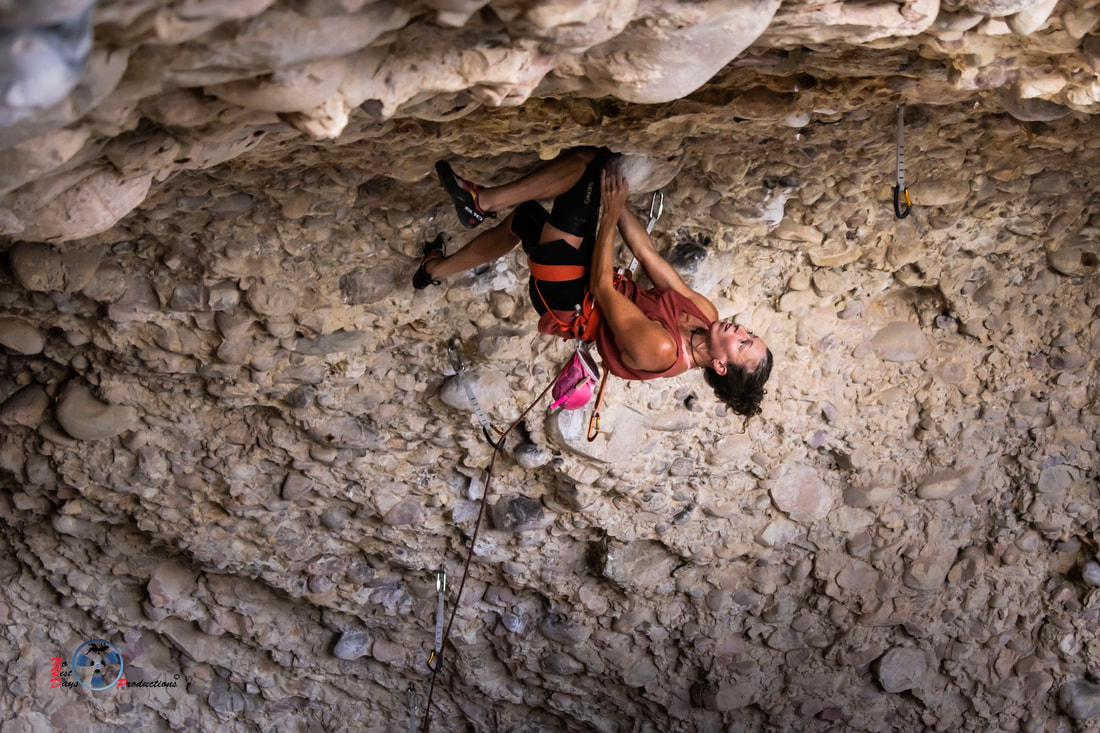 The author working out the knee bar beta (her own short-person beta) on the start climb for T-Rex called Millenium (5.13b). Photo Credit: Zoltan Papp (No Rest Days Productions)
​​The redpoint crux begins with the second dyno and continues with an improbable reach from the jug to a softball-sized cobble. There are two options here: a gigantic way-too-low-percentage dyno, or another technical kneebar, this one inverted. The problem (I thought) with the kneebar was that even once I found a minuscule, insecure bump of a foothold that fit my shindex (shin length) so I could drop my knee down onto the jug next to my hands, there was no way I could reach all the way to the softball from the contorted body position. I thought this for a long time, and I thought wrong. Unlocking this one move allowed me to see possibility, and possibility is a fierce motivator.

On T-Rex, one climbs Millennium in place of the 11d start. Millennium has its own crux, a V7ish boulder after 50 feet of 5.13b. Once that’s over, two uncomfortable rests connect two V4 boulders that get you onto the T-Rex extension. This connection isn’t extremely difficult, but the cumulative pump is mean.
The next shake, before the T-Rex crux, is a not-quite-kneebar against a slippery cobble that doesn’t allow for even an iota of relaxation in the core. Your left calf begins to burn before any recovery hits your forearms, but you have to stay there. I got a tiny respite by moving into a left foot cam that most people use to make the next move, and alternating between that and the kneebar. At first, the rests were so strenuous that I couldn’t climb out of them and had to hang on the rope to recover before continuing. 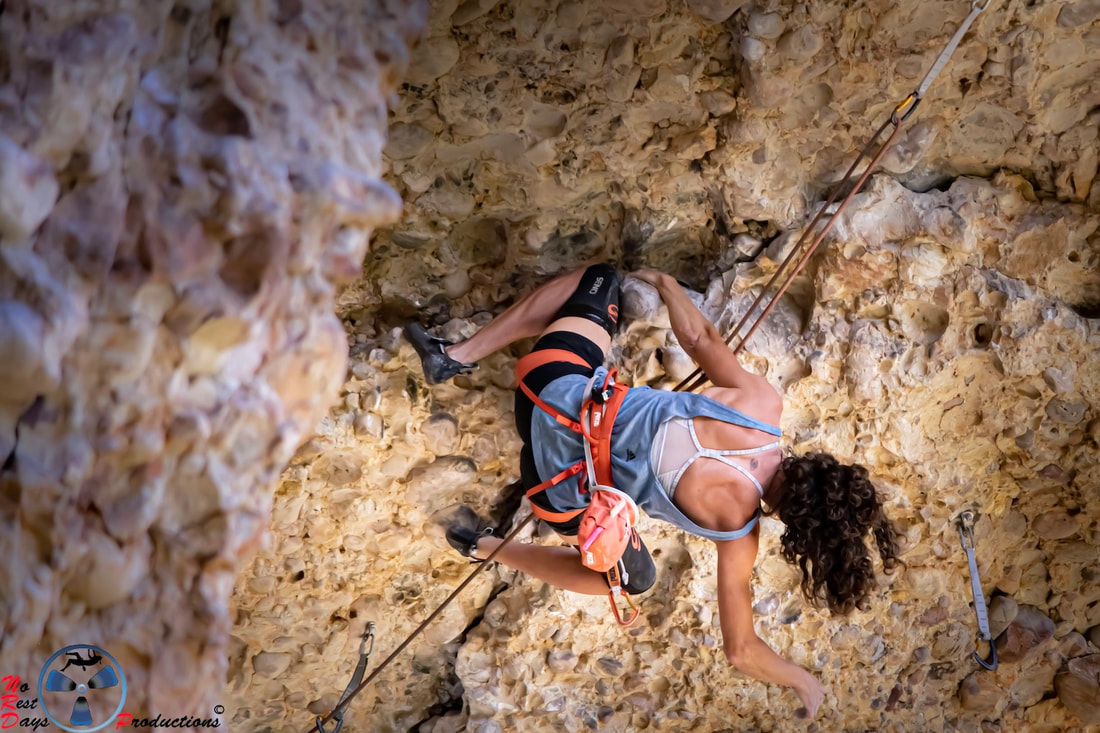 The "rest" before the T-Rex Crux Photo Credit: Zoltan Papp (No Rest Days Productions)
My journal entry from day nine of working the route reads, “One-hung above the crux again today. Same high point as Monday. Still too pumped. Legs dying. Two more weeks, maybe?”
Rifle, Colorado local Danny Robertson used a great analogy to describe the race against pump by referring to the red world record line superimposed on the tv screen in Olympic swimming events. Sometimes you’re ahead of the line, and sometimes it catches up and overtakes you.

T-Rex is one of those routes that’s all about being aware of that red line and how far ahead you are every step of the way. The trick is to train on-route recovery so that pump line stalls out and maybe even falls back a bit before you charge on. Biofeedback reigns supreme. Breathing calms, heart rate lowers, and then all efforts go to sending oxygen to the mitochondria. Lactic acid, go away!

My tenth day on T-Rex, we finished our standard morning routine of coffee in bed and oatmeal for breakfast, and left camp at 9am like always to avoid hiking in the heat that was soon to come. Lola, our sweet blue heeler, strutted along between us, proudly sporting her own backpack, making sure neither of us strayed from the trail.

​The sun was still beating on our first warm-up when we got up to the crag. We set up our day bivy at the back of the cave. Lola was relieved of her pack and watered. Then we sat, waiting for the earth to spin us into shade.
Our warm-up was slow, three pitches at a very relaxed pace. Charlie geared up to try his project, a long-term nemesis. He wasn’t having his best day, wasn’t climbing like himself, and he was getting frustrated. After lowering him, I quietly went about my own readying ritual, getting my thin cord out and arranging my gear at the base of T-Rex. Then I went for a short walk to empty my head and distance myself from my partner’s mood before giving the dog a few pets, donning kneepads, tying in, and shoeing up.

That journal entry goes like this: “Well. Started the day feeling like complete ass, heavy and lethargic, slightly headachy. And it was hot. Very hot. Charlie had a hard go on Shagger. Energy was far from positive. Then, I SENT T-REX. No idea how. Felt pretty NOT good until I moved into the Millennium boulder, and then it occurred to me that if I tried really, really hard, I could do it…and something kicked into gear. Pump was totally manageable, but forced myself to stay in the rests longer than I felt like I needed to just to be safe.” 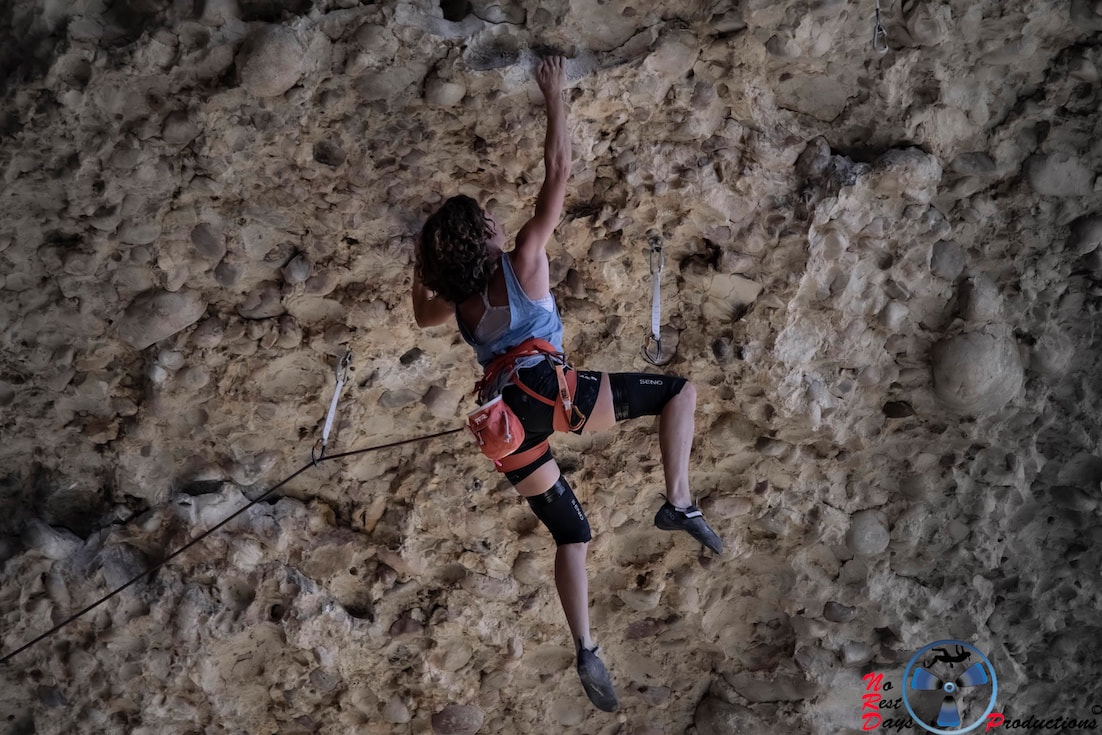 Maggie negotiates the T-Rex crux throw. Photo Credit: Zoltan Papp (No Rest Days Productions)
​This entire season, I’ve been living in my own version of Wonderland. Although things went well, nothing was actually the way it was supposed to be. I never had the feeling that I was totally in control. The experience included an oftentimes crowded crag, cross-traffic on shared sections of route, less than sticky conditions, and a partner fighting to overcome negativity from his own perceived poor performance, but I was somehow able to focus to beyond those things.

The hike out was silent, my head full of thoughts, but each one crystal clear. I’ve had the season of my lifetime. It’s more than just one route. It’s every climb along the way that I made the commitment to see through from start to finish. It’s indulging in the process, and being willing to accept the me that I am right this minute. It’s not just driving past. It’s taken me damn near half a century to learn and become these things, and I’m acutely aware that I’ll never be done evolving.

So, I knew who I was this morning, but I’ve changed a few times since then.

Balance your act. Take proper care of yourself, both physically and mentally. Yoga is a really, really good idea. Sever success and failure from your concepts of good and bad. Reward yourself for the things you do well. Let go of the mistakes, hold on to the lessons. Disown your habits, de-condition your thoughts, and throw away your self-imposed limitations.

​Instead of wishing you could climb something, wonder if you can. When you come up against a wall, ask, “Who built that? Was it my body, or my mind?” Believe in the boundless nature of things. Try really, really hard, and you can do it 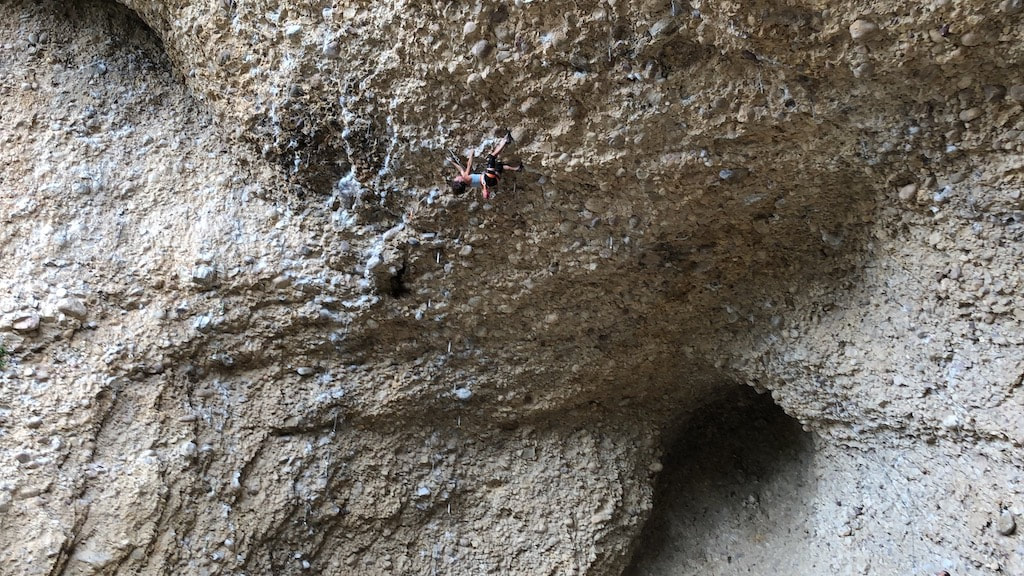