Hayden Robinson and I used the new Delta2p portaledge in October 2020 on the climb Hockey Night in Canada on El Capitan in Yosemite, California. The Delta2p is the new ledge with the cantilevered design, and I’m going to give you the run-down here. [Ed. Note: The cantilevered design means that the ledge sticks out from the wall at 90 degrees to the traditional ledge setup, so the narrow part of the ledge - not the wide part - is against the wall.]
Hockey Night was my 63rd different El Cap route, with our final bivy on the wall being my 800th night spent on the side of El Cap - not counting base nor summit bivys. I would guess I have spent the last 200 nights or so sleeping on D4 portaledges made by John “Deucey” Middendorf, helping to break them in and making sure they are the best they can be before they go out to market. My specific instructions were to “abuse the hell” out of the ledges in the real world - which I most assuredly did - so what I write to you now is not Big Wall Theory, but tried-and-tested Big Wall Fact that has been forged in the granite crucible.

I first tried out the D4 Delta2p ledge with my partner Debbie Fowler a year ago in Middendorf's factory in Tasmania, Australia. I was impressed with its narrow profile and stability. Amazing to me is the fact that you can stand comfortably on the outside end of the ledge without causing the ledge to tip. This was unexpected as you would think it might slip, but it doesn’t. 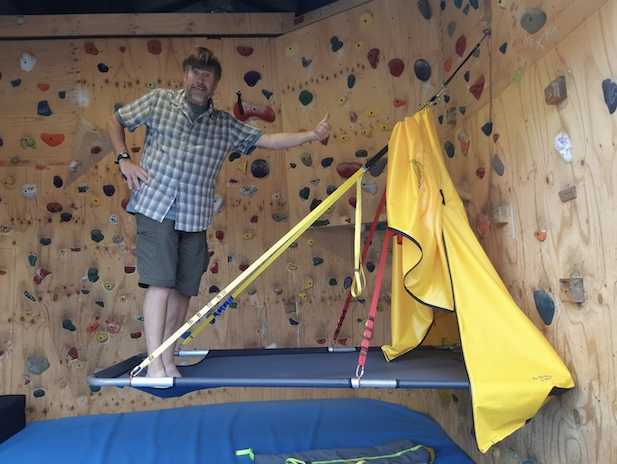 "Yup, you can do this!" The author Peter Zabrok testing the new D4 Delta P2 design. Photo Credit: John "Deucey" Middendorf
I figured the narrower profile of the Delta2p ledge against the wall would be an advantage when camping on anchors without enough horizontal spread. Think about it – the ledge is turned 90 degrees from a regular ledge, so if you are stuck camping on a narrow array of bolts, the suspension point will be less offset. Inside of John's factory, it made sense for two people to sit side by side, with our backs against the wall as a handy backrest. This is how I envisioned using it. 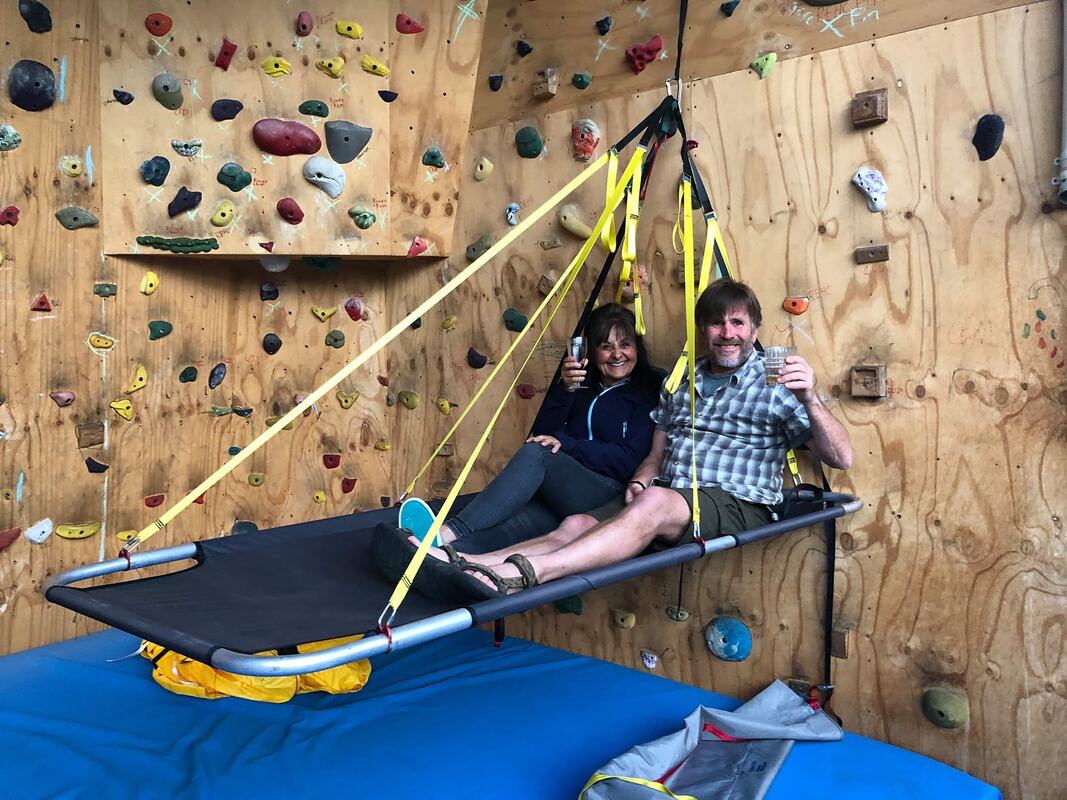 "You can use the wall as a backrest - at least in theory... " Peter Zabrok and his significant other Debbie Fowler testing out the Delta2P portaledge in John Middendorf's factory in Tasmania. Photo Credit: John "Deucey" Middendorf
Another thing that makes this ledge so easy to set up, not to mention easy to carry up to the base of the wall and back down from the summit, is the Delta2p is incredibly and unbelievably lightweight. With its fly and storage sack, it weighs in at a mere 6.5 kg = 14.3 pounds, less than half of what those gigantic Black Diamond contraptions weigh. So with the Delta2p ledge and fly packed together in the bag, you are left with a seemingly impossibly small package only 36 inches in length, with an elliptical cross-section about 12 inches wide by 6 inches thick. Can you even imagine a double ledge packed up this small?

Now compare these specs to those big-ass old school ledges, and you know the ones I mean - those monstrosities you have to fight constantly, especially in a bit of wind; the ones you can barely lift because they are so damn heavy; the ones with that super-annoying spreader bar that you are always battling, the greatest retrogression in portaledge design history?!  Yeah, those ledges.  If you hate fighting those big f*ckin’ heavy-ass ledges, and if you find them as hard to assemble and take apart as I do, then the Delta2p is definitely the ledge for you. ​ 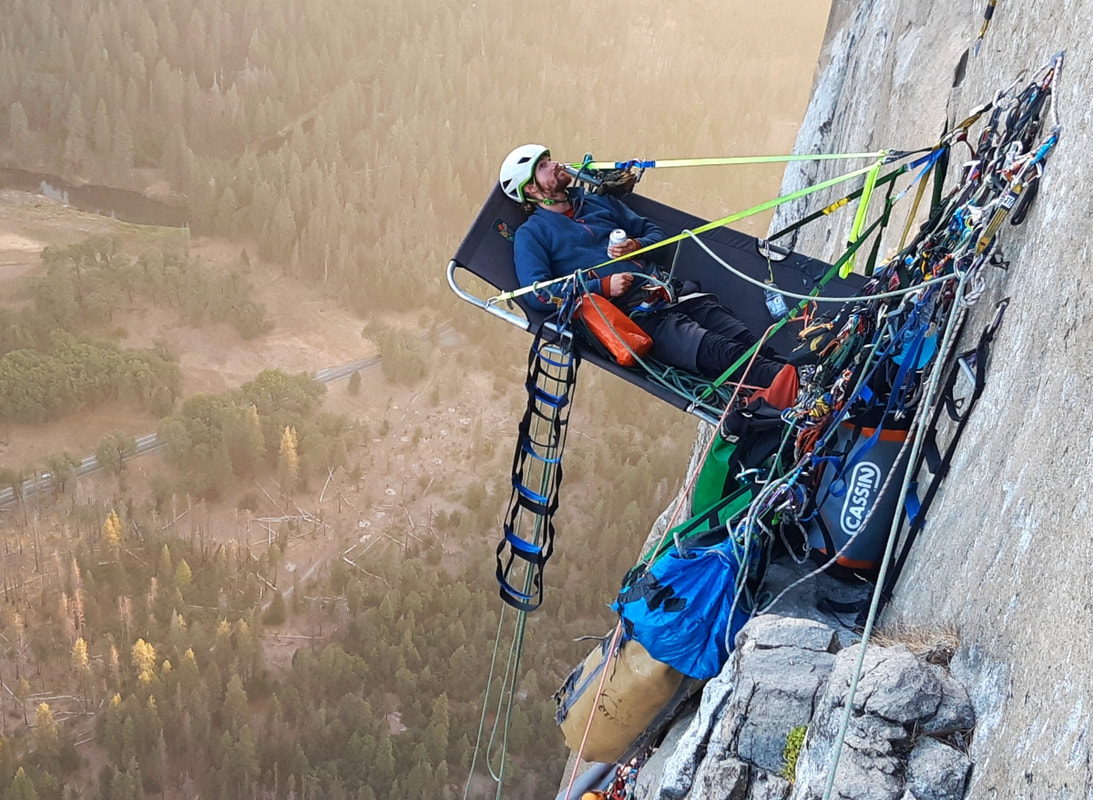 "No more crappy butt shots of your leader above." You get a superb view while belaying from the Delta2p. Hayden Robinson (IG: @aidlord_) in the photo. Photo Credit: Peter Zabrok
In spite of the ledge being so easy to take down and put away in its storage bag, as always I chose to “flag" the ledge during hauling. What this means is that you attach the fully erected ledge to the tensioned haul line above the load, so that when you arrive at the next belay, you simply detach the ledge from the haul line before docking the pig, and then you have an immediate belay platform on which to relax and get comfortable, instead of hanging in your harness and crushing your kidneys or suffering on a belay seat. How to flag your ledge is described in great detail in my book HOOKING UP – The Ultimate Big Wall and Aid Climbing Manual, and the trick is to have a couple of dedicated Yates adjustable daisies on top of the ledge. Not only does this make flagging and especially un-flagging the ledge a breeze, even in the wind, but it gives you universal positioning adjustment of the ledge at your campsite. Think about it… 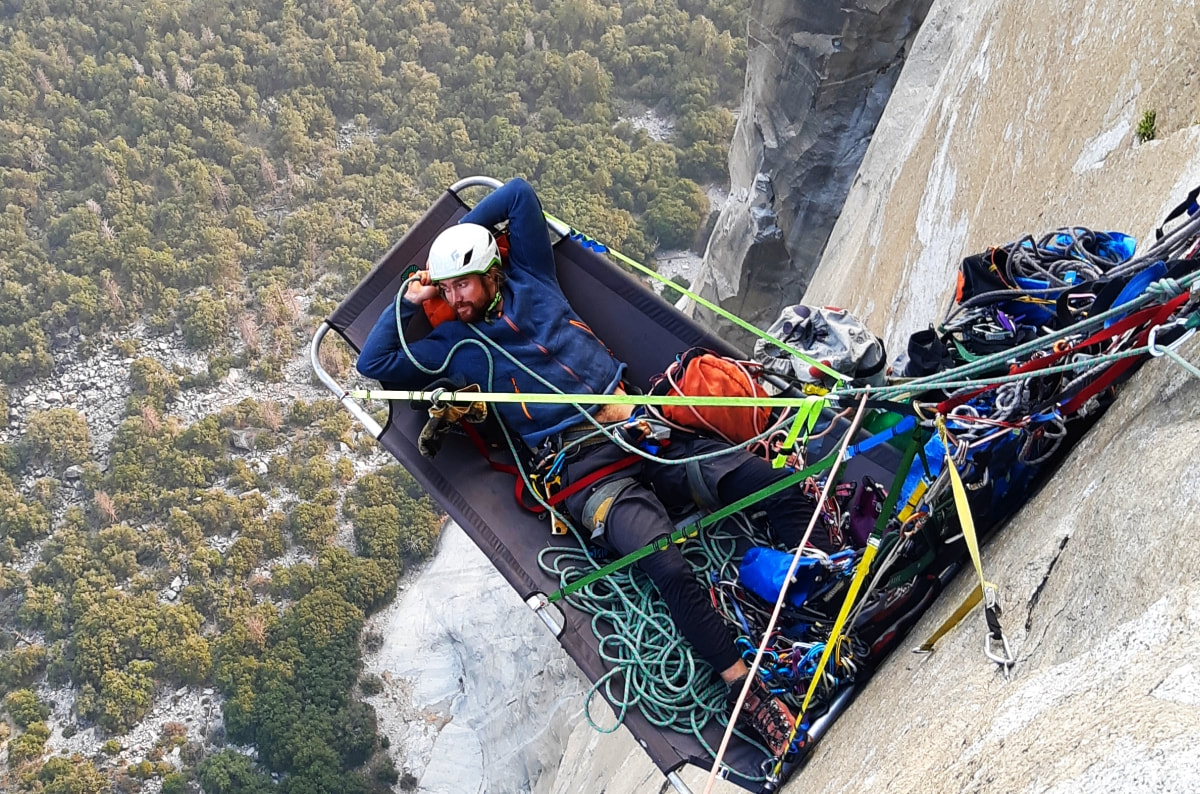 Two dedicated Yates Adjustable Daisies on top of your ledge provide infinite adjustability and an instant campsite. Hayden Robinson (IG: @aidlord_) in the photo. Photo Credit: Peter Zabrok
​The weather was perfect, so we never deployed the fly, but check out Deucey’s photo below. A few things to note are the full-strength “dogbone” suspension point that goes through the fly, so you don’t have to faff around with your lead rope to make a backup. There is no “tent pole” needed for the inside of the fly, like you use with a traditional double ledge, so a bit of weight and clusterf*ck saving there. There is but a single sealed seam, two waterproof zip doors on either side, and comes with bomber wall-side reinforcement. And the snugly-fitting corner pockets mean the fly will stay in place once and for all. 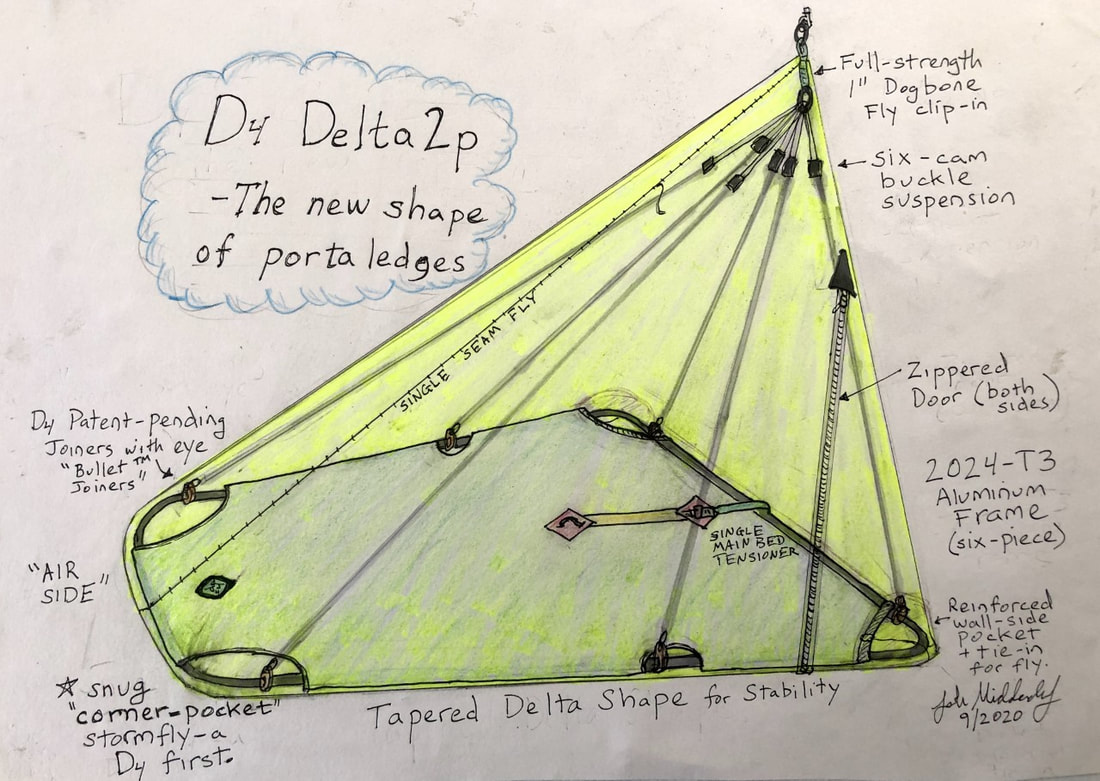 Study this photo, and take a close look at all the fabulous new features on this D4 fly! It will keep you dry under the harshest and wettest conditions imaginable. The full-strength “dog bone” clip-in point gives you the correct 'hang.' Photo Credit: John "Deucey" Middendorf
So even though I never used the fly on the Delta2p on Hockey Night in Canada, I did indeed use the fly on my D4 double ledge on previous walls. HELL YEAH, I used the fly, holy frig! Have you ever heard of that climb on the right side of El Cap called the Waterfall Route? Well, I can tell you why it’s named that. The Waterfall Route climbs directly beneath Horsetail Falls, which is usually dry in the fall, unless you happen to get caught in a thunderstorm. The forecast called for a tenth of an inch of rain, and in fact we got over an inch. The waterfall opened up directly on top of us, and it was every big wall climber’s worst nightmare – we got HAMMERED!
But I'll tell you this - the Deucey fly that I was using kept me bone dry directly under the main force of the falls. While my partners were fighting for their lives, kneeling in the water to avoid hypothermia while frantically bailing, I was comfortably ensconced in my D4 ledge while getting pelted by the main part of the waterfall. Yet I remained so dry, I didn't even bother to put my camera into a ziplock bag as it was fine just clipped to the ledge strap. The next day, my partners grabbed all their wet clothing and sleeping bags, and bailed to the base to dry them out in the clothes dryers; I just left everything up on the wall because nothing under the fly got wet. So what you need to know is that your D4 portaledge fly will keep you dry, like no other fly ever made! There could be no worse test, and no better outcome.
Now the million-dollar question - do I prefer the regular D4 double, or the Delta2p? That's a tough call. I only shared the Delta with a partner for a single night, and we slept with our heads at opposite ends, which is not how it is designed. The prototype I was using had no separation strap, and it was definitely a bit “cozy” for two grown men. Certainly, the Delta2p is the ultimate “Couple’s Ledge,” however. And, if I were soloing, I would take this ledge over any single ledge, hands down. If you are concerned with keeping things as lightweight as possible, then this is the ledge for you. 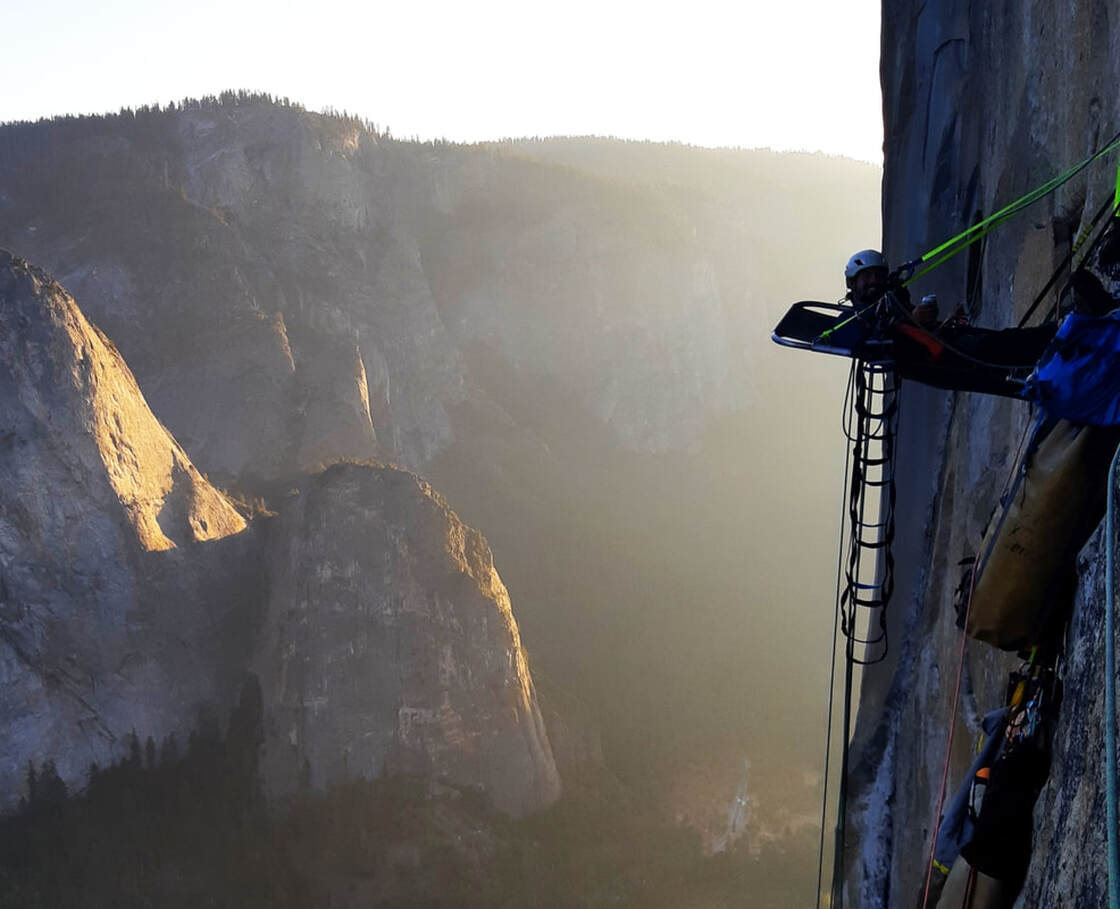