Featured photographer Guillaume Borga is located in St-Nicolas de Véroce, a small village at the foot of Mt. Blanc in France. Common Climber shares some of his incredible climbing photos along with an interview about Guillaume's climbing and photography. You will see a particular focus on the climber's eyes. Guillaume captures some of the best facial intensity we have seen in climbing photos. 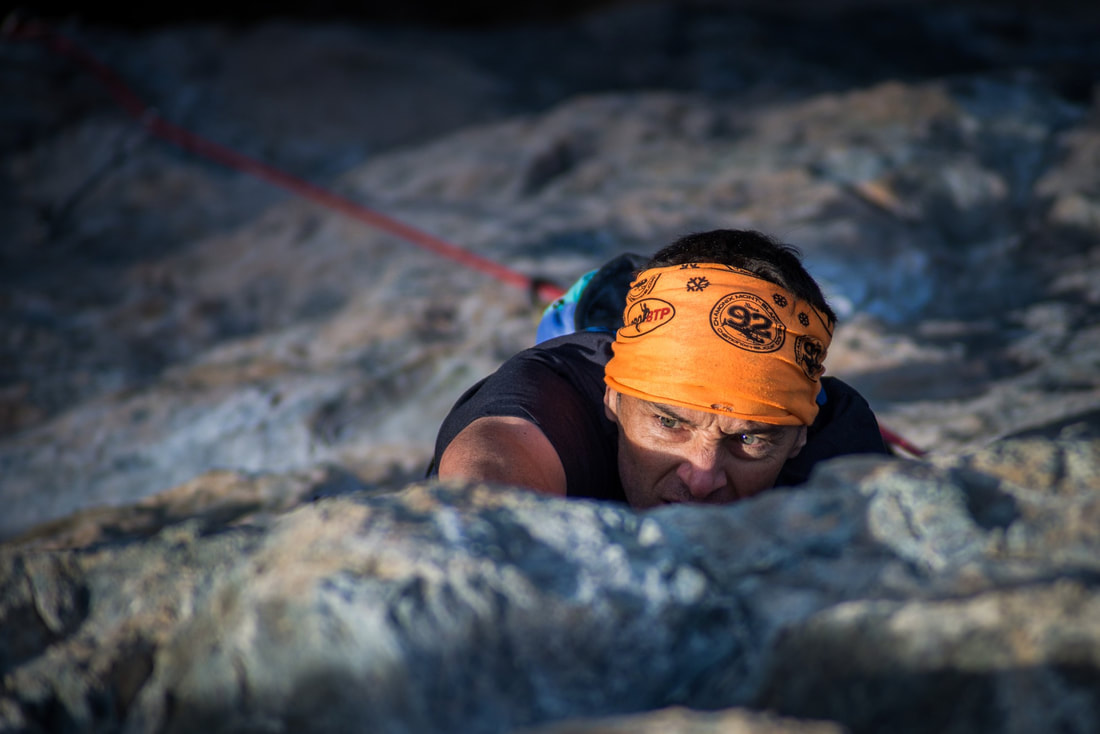 Olivier Broquet is on "L'arbre Jaune" (7b) at Bionnassay's cliff in St-Gervais, France. Photo Credit: Guillaume Borga
Why do you enjoy photography and climbing?

I am currently 42 years old and have been climbing since I was a kid. Above all, I like to push myself, physically and mentally, to find the solution to a route. Whether it's on a big route, a cliff, a boulder or an indoor gym, the pleasure is always as intense.

Photography came a little later, as a teenager. I love to capture the action, in any sport. Climbing has this particularity that the climber is alone on the route, and the photographer is lucky enough to be able to share these moments with the climber. I love the intensity that comes out of these images, and then to be able to share them with all the friends who were unable to attend live.

When I photograph children, I find this intensity in their eyes. They don't worry about their image, but develop a crazy energy to succeed in their projects, each at their own level. Climbing is not just about the numbers, but allows everyone to surpass themselves. 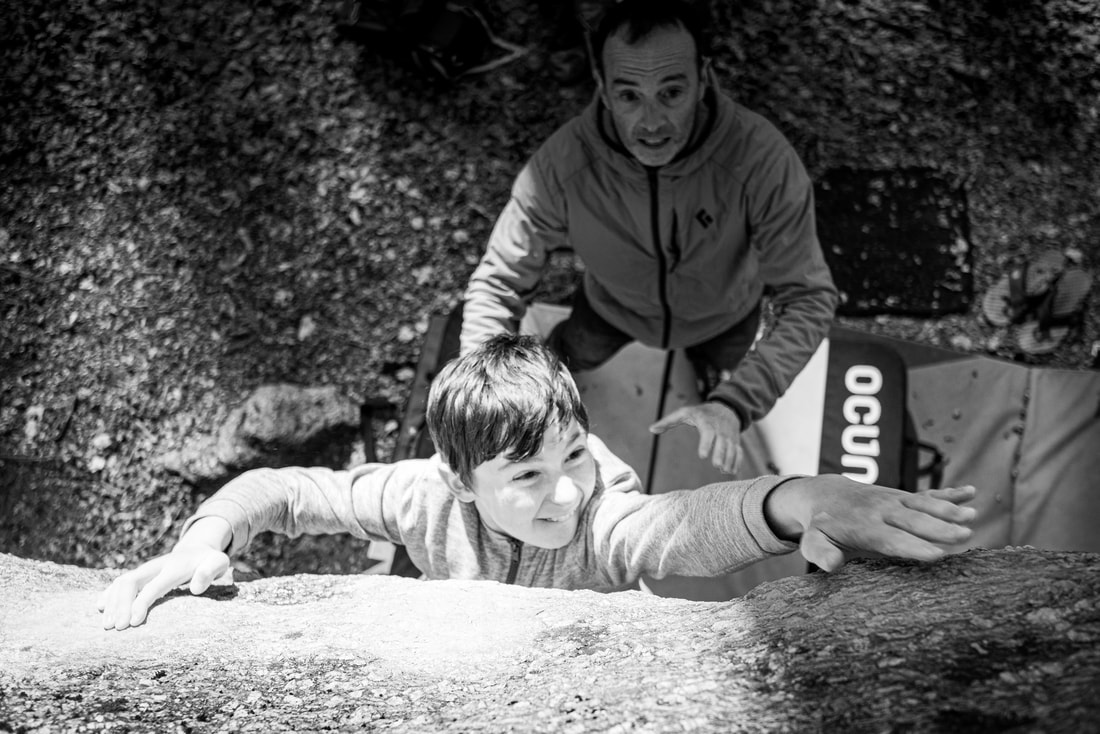 Lilian Borga (Guillaume Borga's son) on an unnamed 6c in the Médonnet boulder forest (Combloux, France). Photo Credit: Guillaume Borga
What would be your best day out shooting?

For me, the satisfaction of a good day's shooting comes mainly from the motivation of the climber I'm going to photograph. I love to be on the route, to be forgotten, and to shoot during real trials. When the climber doesn't pose for the picture but focuses 200% on the climbing and doesn't pay attention to me. When I manage to capture the intensity in the climber's eye, the day is successful. 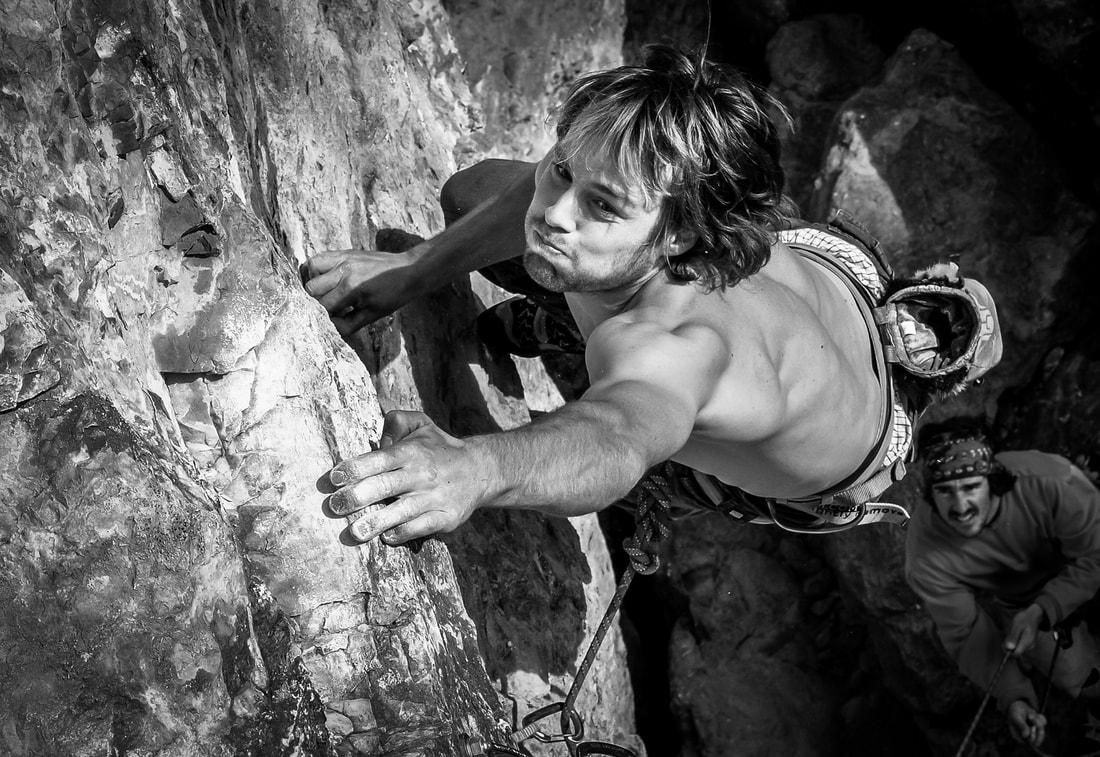 Julien Buttin is on "Vegetal Sup" (8a) at Bionnassay's cliff in St. Gervais, France. Photo Credit: Guillaume Borga
How do you balance climbing with climbing photography? Do they support or interfere with one another?

​It's impossible for me to do both at the same time: either I go climbing or I go shooting.

The two activities are obviously complementary, because the knowledge of climbing allows me to better understand the action, to know where to place myself, to anticipate the climber's placements and to better capture the movement. But when I go to shoot, I'm at 200% and I can't climb efficiently. So I prefer to concentrate on the photo. Other times, when I go climbing with friends, I just don't take my camera and focus on the climbing. It's a good balance. 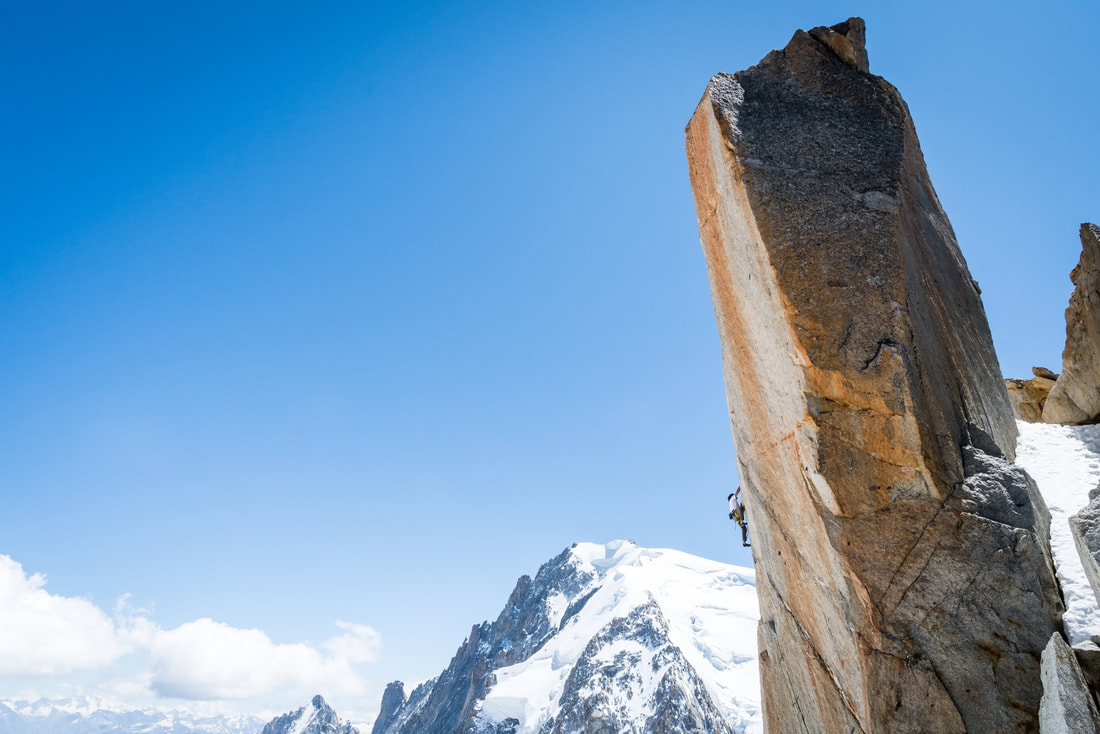 Bernhard Fiedler (IG: @bernhardfiedler) is on "Digital Crack" (8a) located on Cosmique's ridge, which is at 3700m (just over 12,000 feet) in elevation in Chamonix, France. Photo Credit: Guillaume Borga
You live in France. Do you have a favorite place to climb (locally and afar) and why?

I live in the Mont Blanc valley, and we have some very nice climbing sites nearby; But, I also like to discover new sites. I love the Céüse cliff (near Gap in the Hautes-Apes). It is a mythical cliff, full of hard routes and climbers from all over the world. I recently had the chance to photograph Dave Graham and Sean Bailey, just chatting with them at the foot of the cliff! 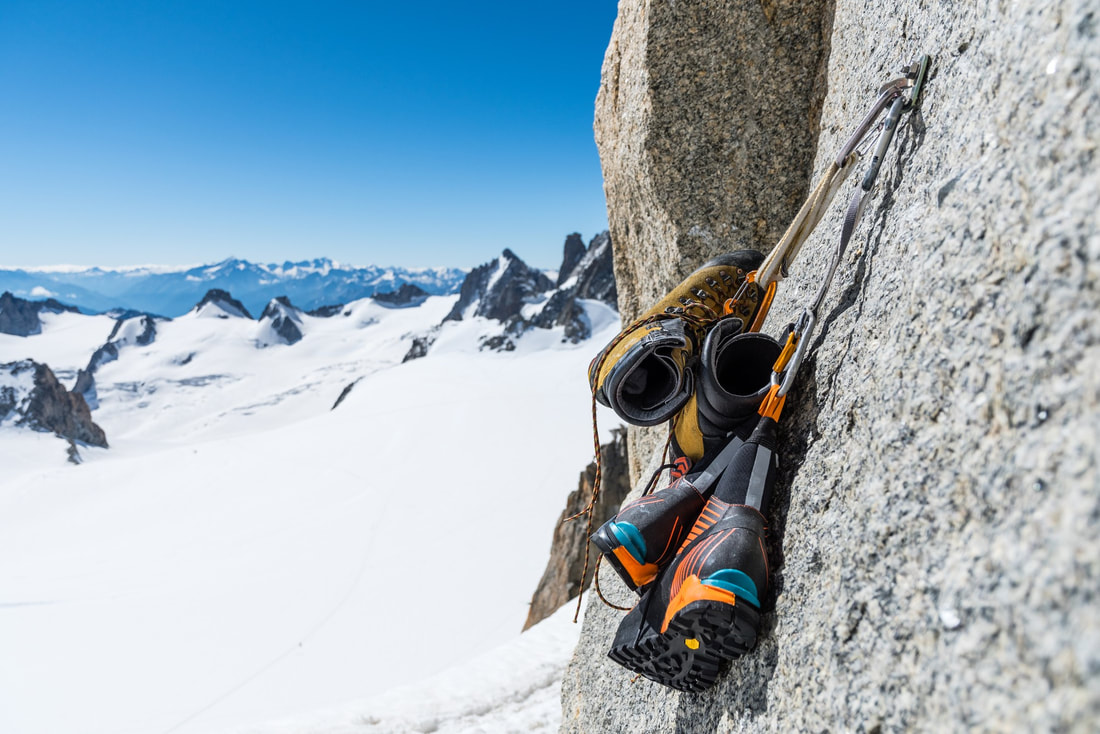 Mountain shoes waiting for the climbers up on "Digital Crack" on Cosmique's ridge (Chamonix - France). Photo Credit: Guillaume Borga
Do you have a favorite place to photograph climbing and why?

There are some places I particularly like, like this boulder forest next to my house, or the cliff of Céüse, but I don't really have a favourite place. I think that the success of a photo lies above all in the feeling that unites the climber and the photographer, whatever the location. 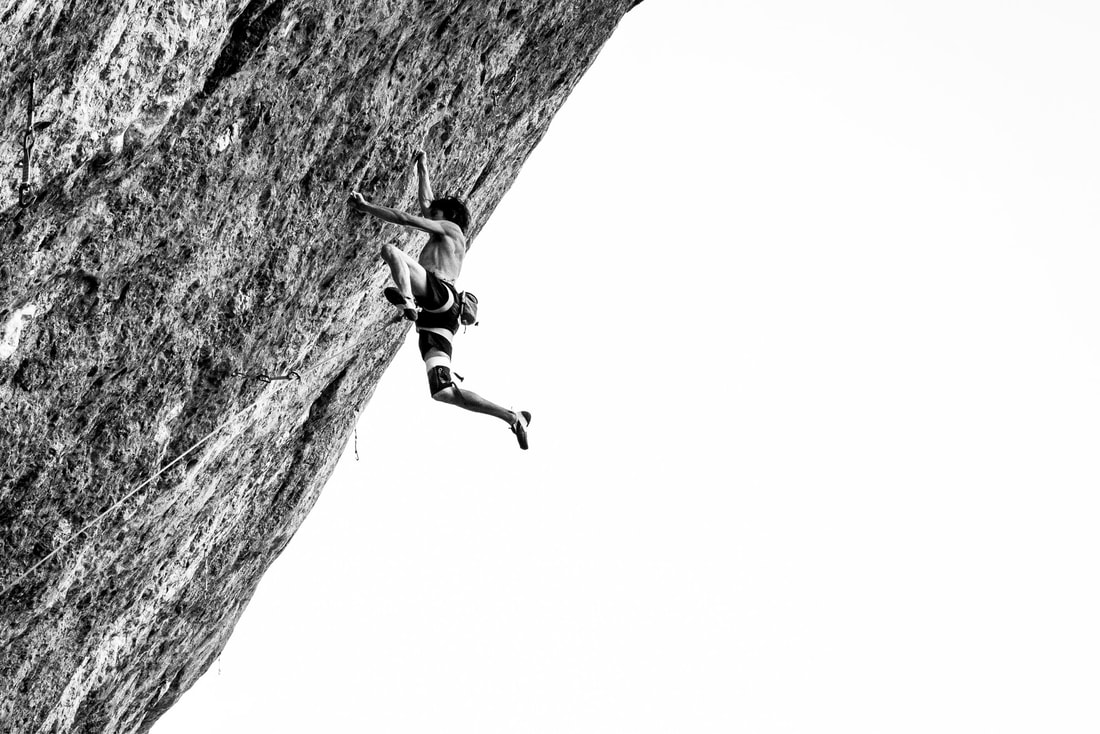 Dave GRAHAM (IG: @dave_graham_) is on "Pornographie" (9a) on Céüse's cliff (Céüse, France). Photo Credit: Guillaume Borga
What's next for you?

Photography is my passion, I wish it could keep going for many years ... I would like to find more time to travel, discover new places, and meet climbers who would like to share this passion with me. I also have some original projects with friends. I hope we will be able to realize them soon. 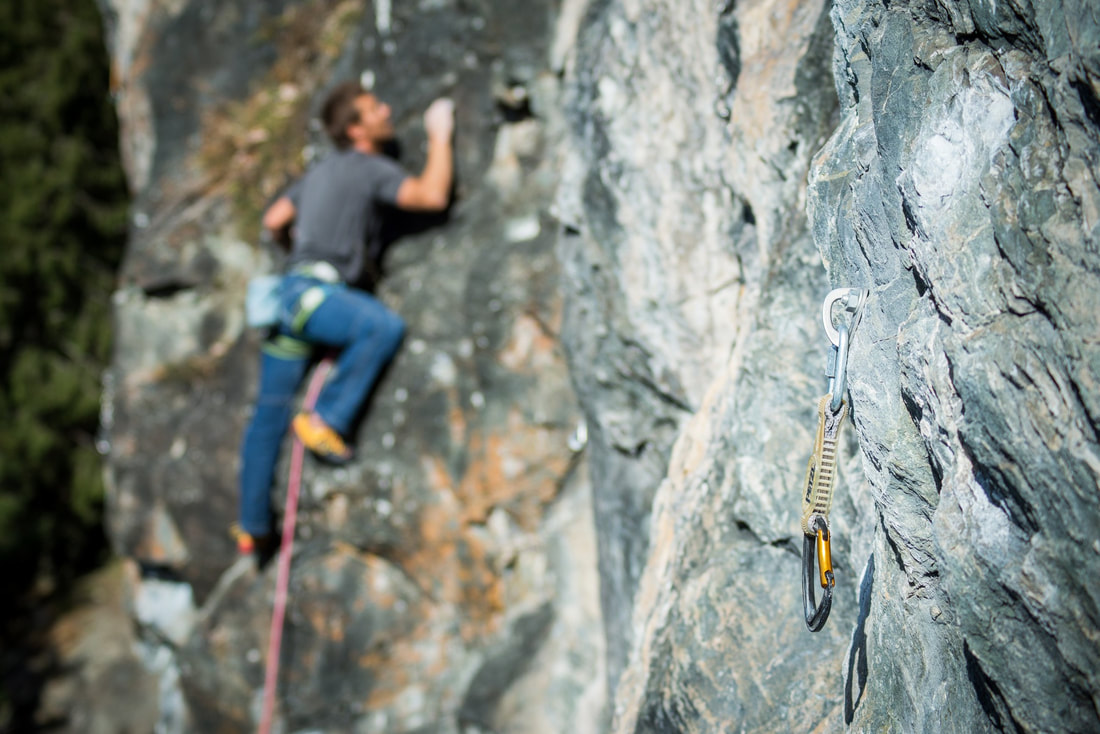 Jean-Noël Karleskind is on an unknown route at Bionnassay's cliff in St-Gervais, France. Photo Credit: Guillaume Borga
Any last words for our readers?
​
Whether it's climbing or photography, I think passion is the key. Take pleasure in what you do, and don't try to "be like the others". Be yourself! 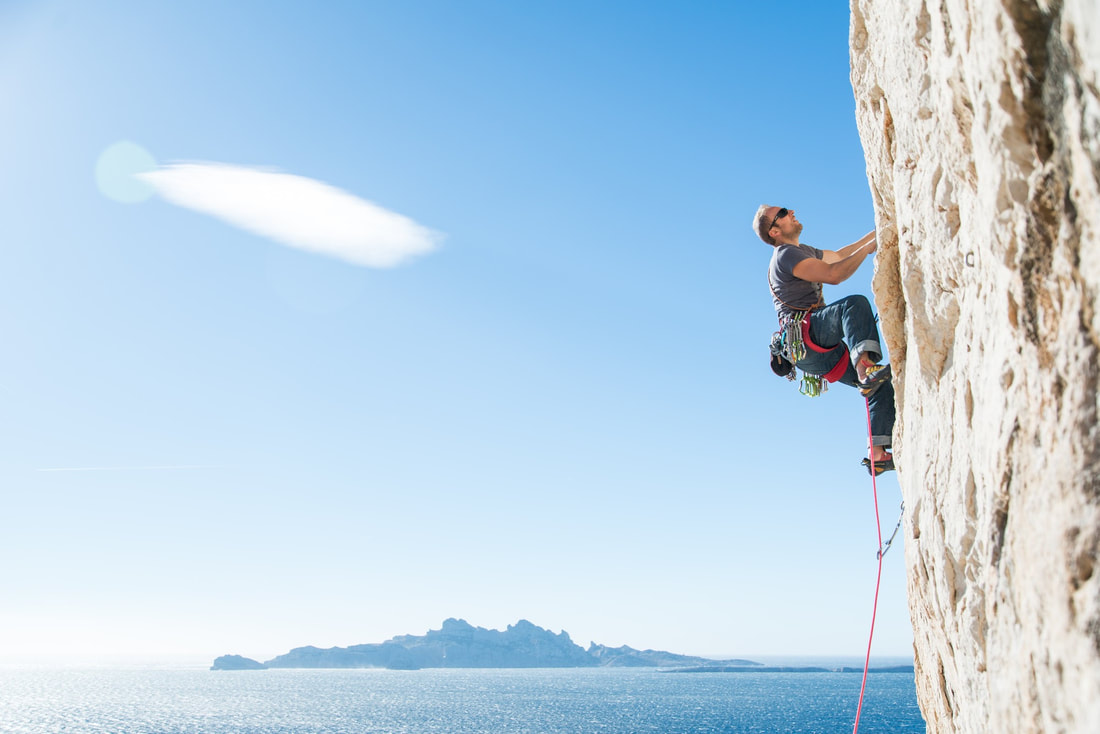