​You have so many merits (athlete boulderer and American Ninja Warrior, physician, cancer survivor, and strong black woman – I’ve seen you do a one-arm pull-up! NOTE TO READERS - see video below!), it’s hard to know where to begin. We will touch on all of these things in this interview, but since we are a climbing magazine, let’s begin with the climbing basics. Tell us about your climbing passion.

I began climbing in 2010 in graduate school by sheer luck. I googled things to do in Nashville, TN while visiting my family and rock climbing popped up! I am a roof boulderer.  I prefer to climb problems that keeps my back parallel to the ground! 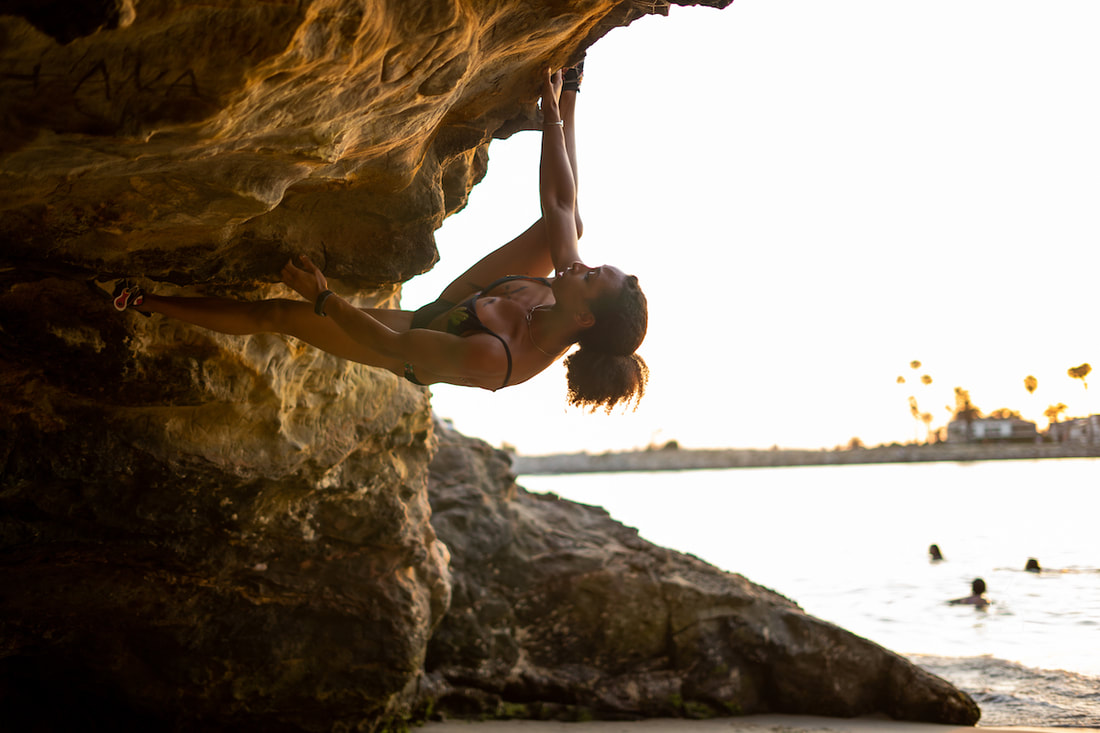 Pirates Cove near Los Angeles, California. Photo Credit: Brian Dubyk, IG: @mynameisbriandubyk
​You live in Albuquerque, NM. There is actually quite a bit of climbing, especially bouldering, in NM. Tell us about some of your favorite spots and why you love those areas.

My favorite place is called the Temple. It is a limestone roof in the Sandias.  It has a short approach with a high concentration of hard roof problems, including the state’s only V14. None of the problems are super high, so it’s a place I can go just with my dog, Hans. 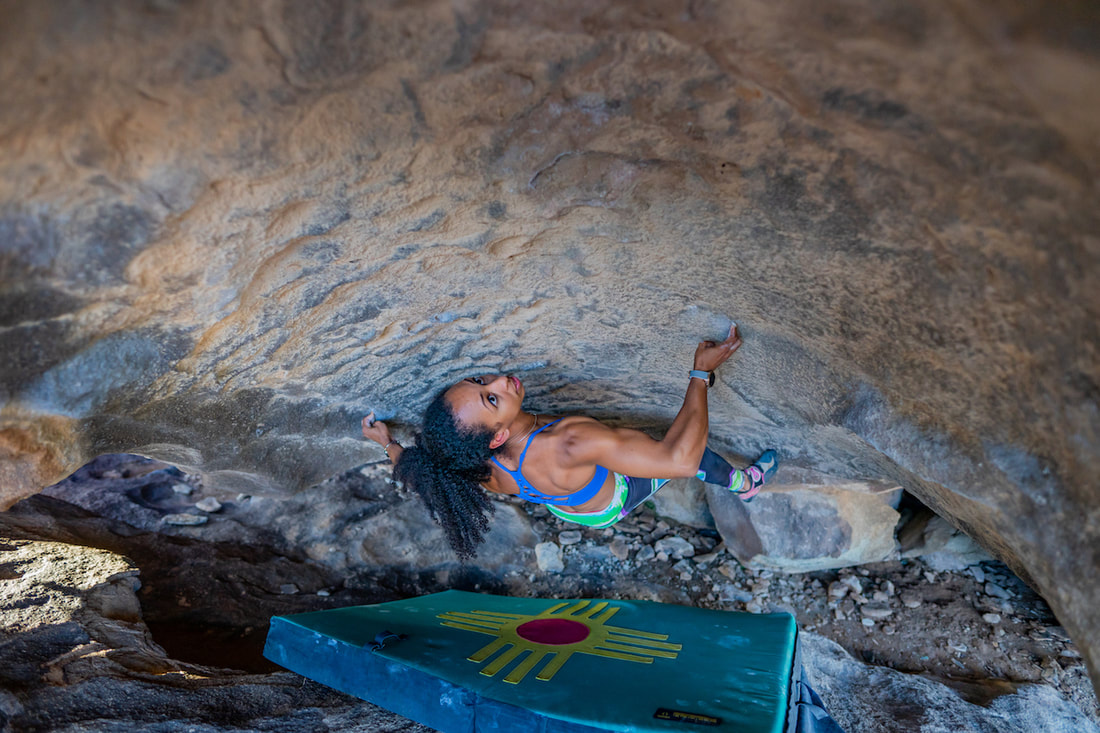 Favia on "A Tale of Two Gabors" at Hueco Tanks, Texas. Photo Credit: , IG: @sleeveless_mike
​What lead you to American Ninja Warrior and were there any connections between it and climbing? (There seem to be a lot of Ninja Warriors who are also rock climbers.)

A call from NBC lead me to American Ninja Warrior (ANW) a few months before the competition. I joined Ninja Force, a local ninja gym and tried to learn everything I could in two months!  For me there was no connection between climbing and ANW. In climbing, I am a static climber and I don’t know how to dyno or do any run and jumps.  Also, there is a lot of parkour, trampolines, and spinning objects…things not usually encountered in climbing.

My first year on the show I was pretty nervous and didn’t know what to expect or even bring to the show.  The other athletes on the show are amazing and quickly welcomed me into their community.  My second year (2019) I was much more prepared, less nervous, which lead to me doing much better—falling on the fourth obstacle instead of the second (2018).
The focus of our July edition of Common Climber is “Honoring Diversity.” Tell us what life has been like for you as a black woman in the U.S. How do you see racism and white privilege expressing itself in the climbing community?

I have been told that I am not allowed to sit on the mats because a group of white climbers did not want me near them. There were other white people sitting on the mat and I asked the staff member “Are you going to ask all the other (white) people to not sit too?” He said, “No, just you can’t sit on the mat.”  After that day, that same group of white climbers would stand in an aggressive posture close to where I would climb and stare me down in an attempt to scare me away from the gym.

​ I have many more examples. I could really go on for a while. 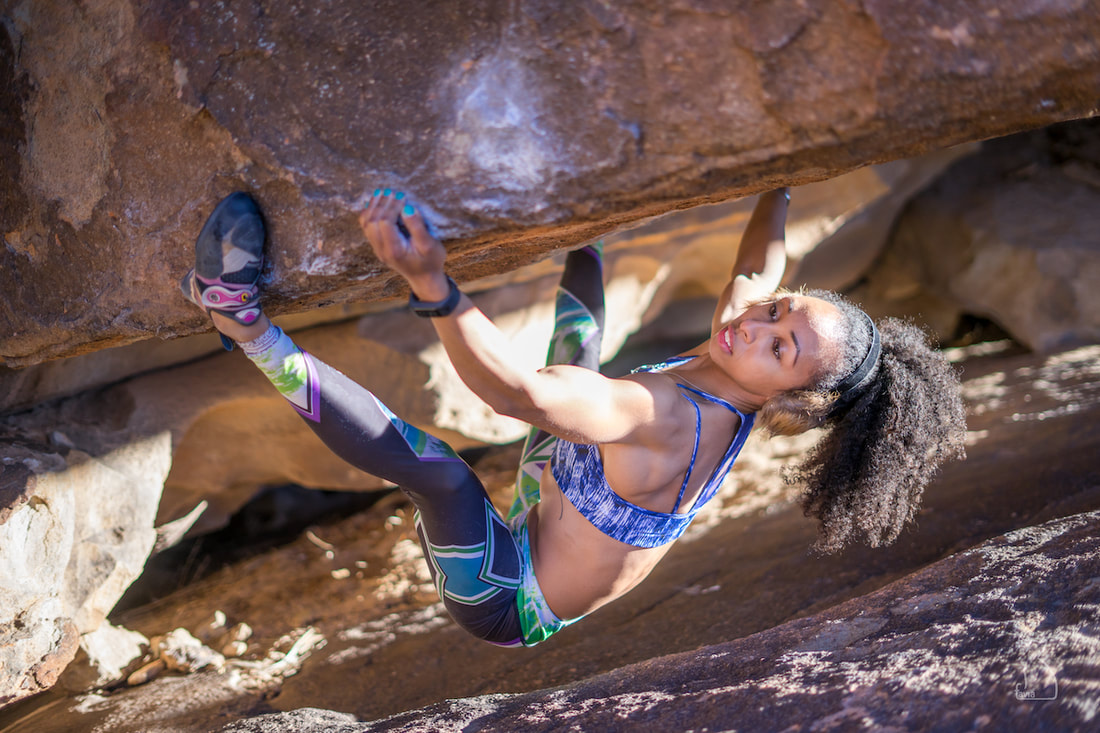 "Ten-Ten" at Hueco Tanks, Texas. Photo Credit: IG @sleeveless_mike
​If there is one thing you’d like white climbers to know, what is it?

Speak up when you see something wrong happening. Listen to your black climbers when they mention racism and don’t become defensive.


​I lived in Albuquerque, NM for 15 years and it is a very culturally diverse state, however, there is a much smaller black population. What has living in New Mexico been like for you compared to other places you have lived?

In the first video Favia introduces two of her five cats. Her other cats are larger and she is incrementally increasing her weight to hold them! Her Instagram handle is @felinefavia and she is a cat lover!
You are a physician. What type of medicine do you practice?

I practice pathology. We are the physicians who make the diagnosis, run the lab, and perform autopsies.


How does racism (and/or sexism) manifest in your workplace?

Racism and sexism run rampant in my workplace, unfortunately. Practicing medicine has been the easy part of my job. Dealing with people yelling at me, shoulder checking me, slamming doors in my face has been the toughest part.  When I report it, then I get in trouble because somehow "I deserved it."


​Physicians often have unrelenting schedules. How do you find time for climbing?

All my time not at work is focused on climbing. I don’t have much of a social life outside of going on climbing trips. I even bring my cupping set and foam roller to work so that I can maintain my body during breaks. 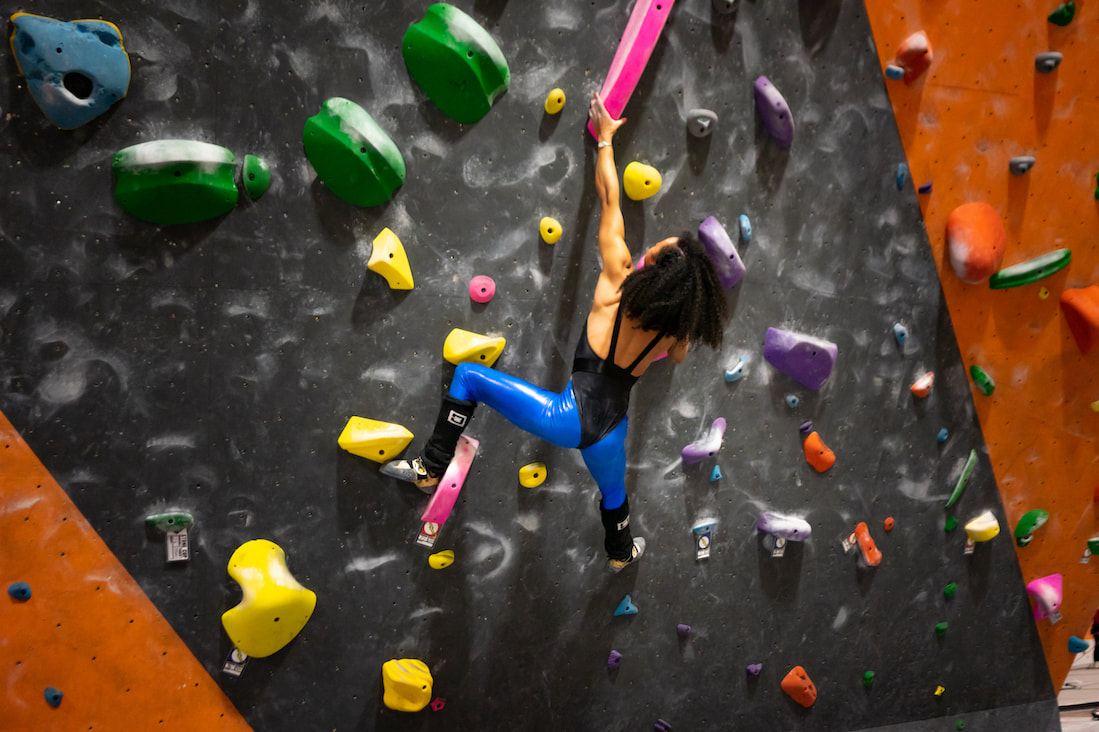 Getting 80's at the gym. Location Stone Age Gym, Albuquerque, NM. Photo Credit: IG @double_chin_climber
You had a grueling bout with cancer. Tell us about that experience and how it affects you now.

I was diagnosed with advanced stage lymphoma during my third year of medical school.  I was pretty much stuck in a bed for 9 months, filling buckets with endless vomiting despite not eating much. I was 20 pounds lighter than my current weight. Both of my pecs were cut in surgeries so my arms were pretty much useless. I struggled to walk because my port (a device to receive chemo) was in my leg. To this day, I still struggle to use my right leg because of the scar tissue and damage from the port.  Overall my health has been poor, but it is improving every year. My immune system is weak so I get infections easily. My first season on American Ninja Warrior, I had a kidney infection and should have been in the hospital.  I often have to remind myself that chemo is made to keep you alive, not to become a professional athlete!
​You seem like a very focused, ambitious person, do you have any specific goals you are working on in the near future and far future?

My current project is Center Ling-Chi (V12) and I would like to send that in the next couple of months.  My far future goal is to climb Saadhu (V14). Both of these problems are at my local crag, the Temple!


Are there any last words to share with the Common Climber audience?

I hope you enjoyed this! 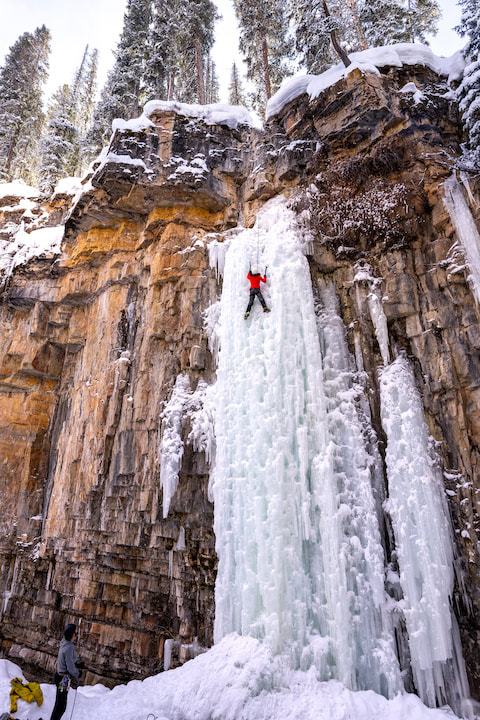 Ice climbing in Durango, Colorado. Photo Credit: Julie Harrington, IG @juliekharrington
WEBSITE: Traverse Girl (Climbing Blog and resource for lowball, roof, and traverse bouldering climbs. In some of her posts Favia talks about her experiences with cancer and how to get a super strong core - i.e. 6-pack abs._
INSTAGRAM: @felinefavia
Check out more of the "Honoring Diversity" edition.