By Keith Bell
As climbers we often trek through fields, woods, forests, snow, swamps, sometimes even deserts to reach the rocky ramparts that we climb. Whether the approach is short or long, we hang in there with grim determination usually with a heavy pack to reach the base of our rocky reveries. After attaining the pinnacle of our dreams, we are then faced with the return to our camp or back to civilisation. Sometimes, in achieving this, we meet the furry, feathered, and scaley denizens of these areas, at times to our wonderment and amazement, at other times to our dismay. Over a long career, I have memories of such encounters particularly of the feathered kind. This is the first part of two articles written about "Animal Acts" experienced while climbing.

There is an Australian climber who had a penchant for winged things, namely in the shape of a menagerie of parrots. An immigrant from East Germany, this climber is also renowned for revolutionising previously unprotected wall climbing in the mid 1970’s. By utilising his Germanic thoroughness, Roland Pauligk invented and manufactured the impeccable, useful, and legendary RP nut. Roland had already attained legendary status with his bold first ascent of Electra at Mt Arapiles; a powerful and talented climber, he was built like the proverbial "brick outhouse." It was in the late 1960’s when I first crossed paths with Roland, his partner Anne, and Keith Lockwood, all Arapilean stalwarts from south of the border (Victoria, Australia) at the Warrumbungle Mountains (1) in NSW (New South Wales, Australia). 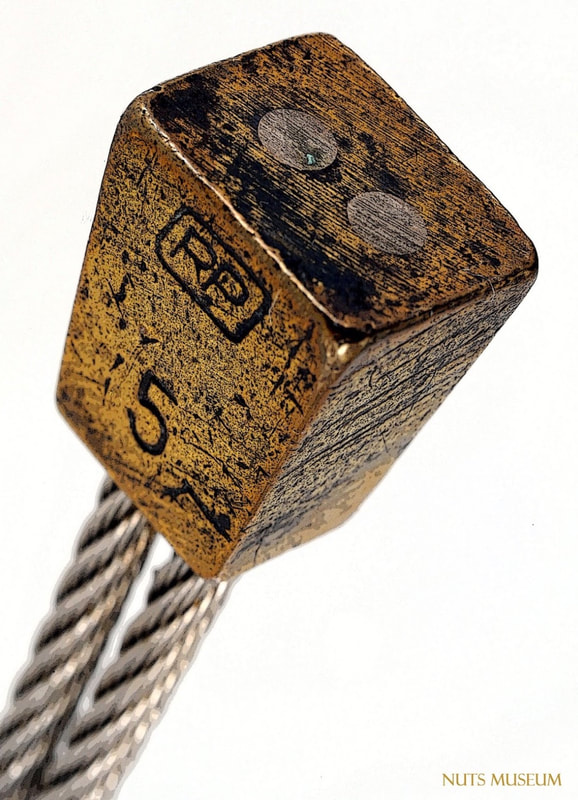 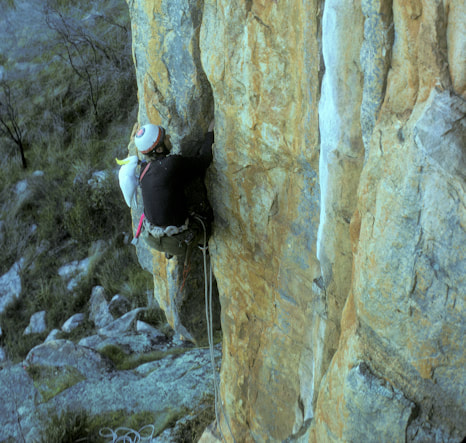 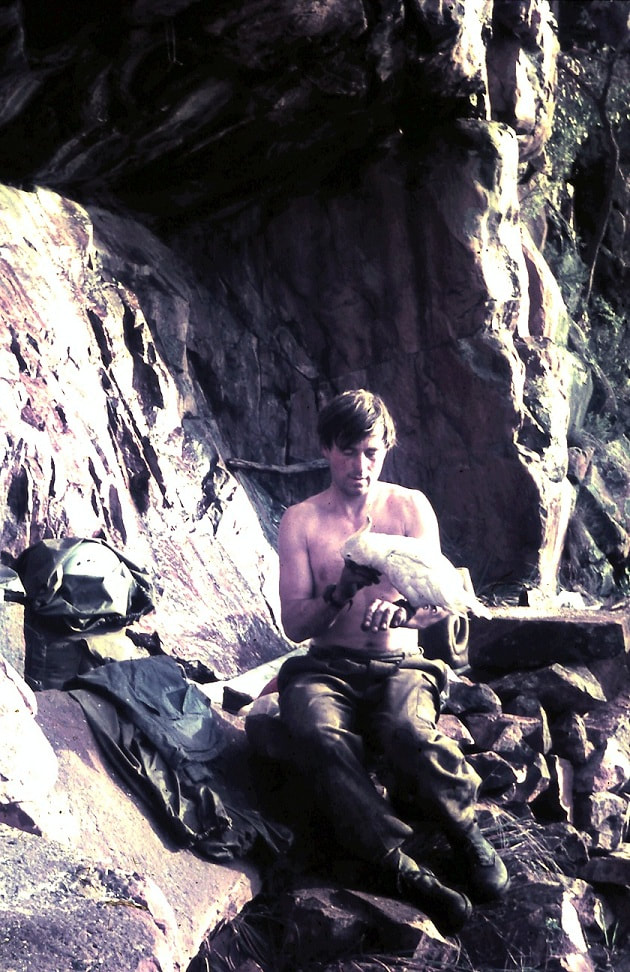 [Click to enlarge the above photos; Hover or click to see caption]
“Polly, want a cracker?” -- My pro largely consisted of Ewbank "Crackers" and a swipe with what John called his "Kiss of Death", a large solid 4-1/2 inch-long hexagonal aluminium nut would surely remove the problem. ​

Flight of the Phoenix

Back in the day I was reading the latest Ascent magazine in the book section of Steve Komito’s shop at Estes Park in Colorado when something caught my interest. Customers came and went but I didn’t notice them. My concentration was fixed on a photograph, a shot of a climber on Bluff Mountain, a peak in the Warrumbungle National Park back home in Australia. I didn’t really notice the climber as I was mesmerized by an architecturally beautiful, seductively attractive section of rock to his right. I felt sure that a route could be made to go on that rock and carried the dream halfway across America, then, over the Easter of 1974, the opportunity presented itself and the challenge was taken up.

My old mate, Ray Lassman and I tiptoed up the scree at the base of Bluff Mountain – the pre-eminent peak of the "Bungles," The intervening years had seen us both progress beyond our former beginner status to take on this first ascent. After two hard pitches up the initial pedestal, two things made us think of backing off. One was the vertical sweep of rock out right that we would need to first descend to and then climb; the other was the freezing early morning winds that were blowing and buffeting around us. Bryden Allen’s words in the “Bungles” section of his seminal 1963 NSW guidebook came to mind.

“One is likely to freeze in a biting wind in the early morning and suffer from heat exhaustion in mid-afternoon.”

Despite the conditions, Ray and I decided to push on, doing a short abseil down to a small stance capped by a long overhanging lip of rock heading out right seemingly almost to South Australia. “Watch me!” I said as I launched out onto the wall below it. Slick yellow rock presented itself and steep at that. My arms took a pounding, but the protection slotted in easily. The yellow rock gave way to rough reddish brown and the angle eased. Beautiful gymnastic moves came to hand. I moved on up. Incredible. An unusual hole above a ledge took a bomber number 10 hex. “On belay," I called for Ray to climb. The wind dropped and the warmth of the sun now etched and caressed our skin. We were in for a fine day. 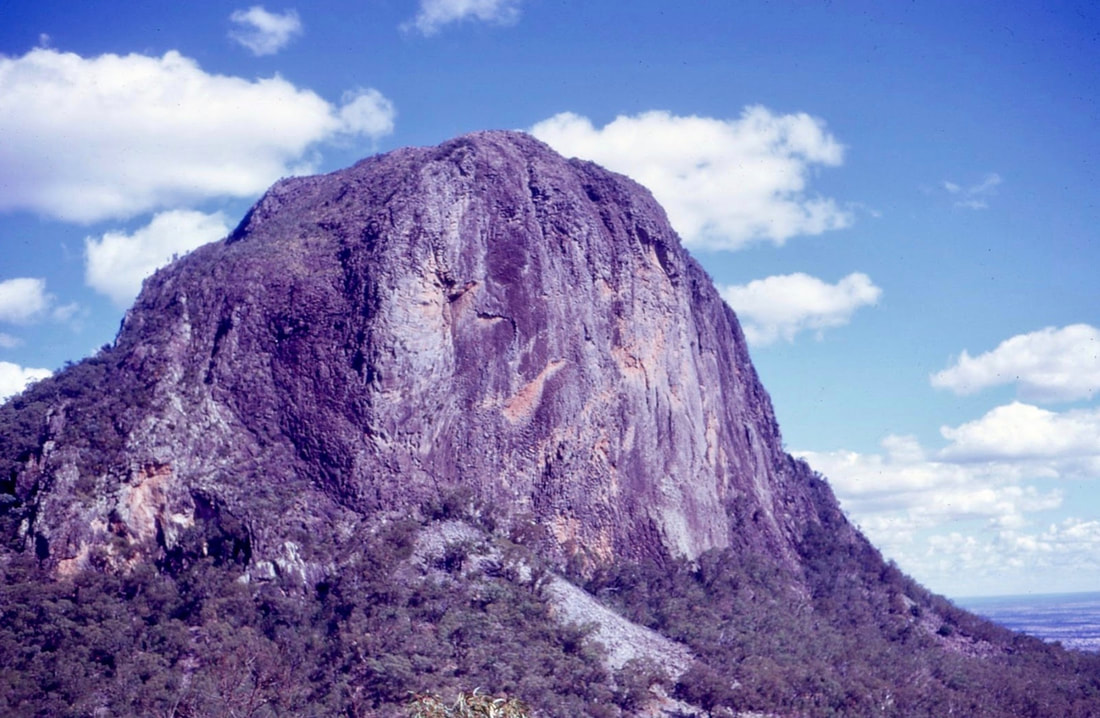 Bluff Mountain in the Warrumbungles, New South Wales, Australia. "Flight of the Phoenix" goes up below the yellow streak seen in the bottom middle of the photo. (Photo Credit: Keith Bell)
The two of us stood on the ledge. Above, the overhang brooded in silent shadows while the rock around us was a sea of shimmering crystals. I led out to find that the shimmering crystals coalesced into jugs; I was bewildered by the array of holds on the wall. Random thoughts flashed through my mind - the volcanic conception of its birth, convulsed by heat and pressure, then slowly cooled, left large hexagonal prisms; solid rock and good nut placements were its climbing legacy. I ascended hoping the pitch would not finish. A perfect pitch, a magnificent position, and alas, too short, as a small ledge stepped across my vision. Ray was ecstatic at the experience when he joined me on the ledge.

Twelve metres above, the diagonal overhang reached its zenith as it swooped rightward across the face in its dying movement. An impasse? Only one way to find out. Amazingly, this section still sported the same holds, protection, and incredible position. I reached the roof near the transition, moved right and belayed in a small niche below the overhang. As I waited for Ray, I reflected on the three pitches below; they must surely rate as the best sequence of pitches I have climbed in Australia. Poetry on rock.

Above me was steep, seemingly blank rock melting into a sea of azure blue sky. But more delightful wall climbing continued for a number of pitches ultimately leading into an overhanging amphitheatre of rock. The wind had abated by now and the sunshine streamed down, striking up the orchestra of heat and rapidly becoming oppressive. 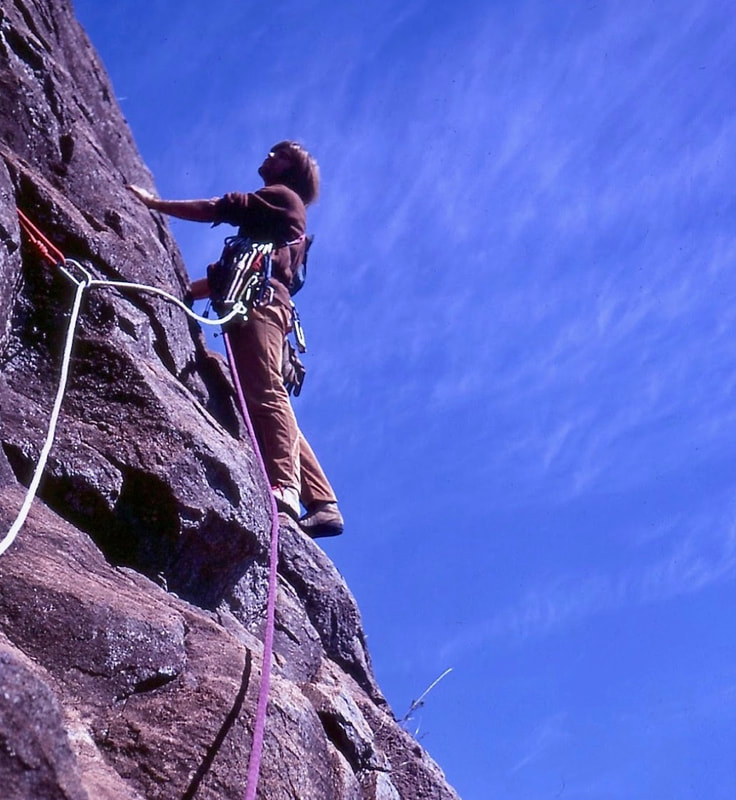 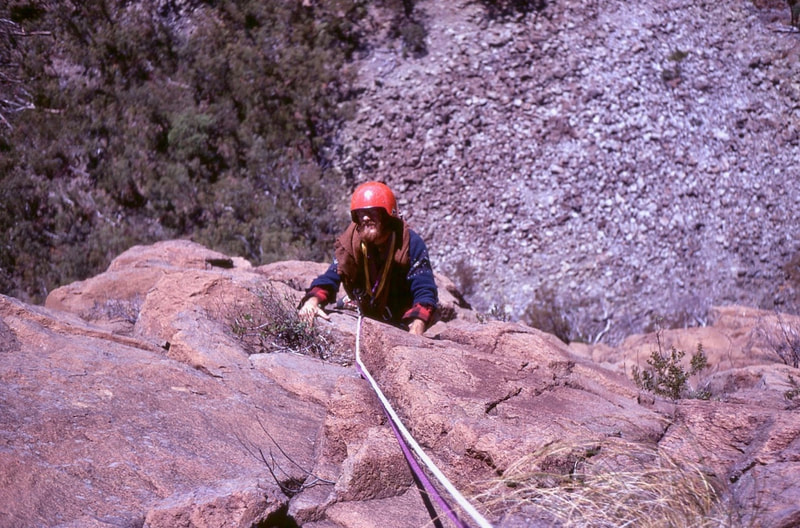 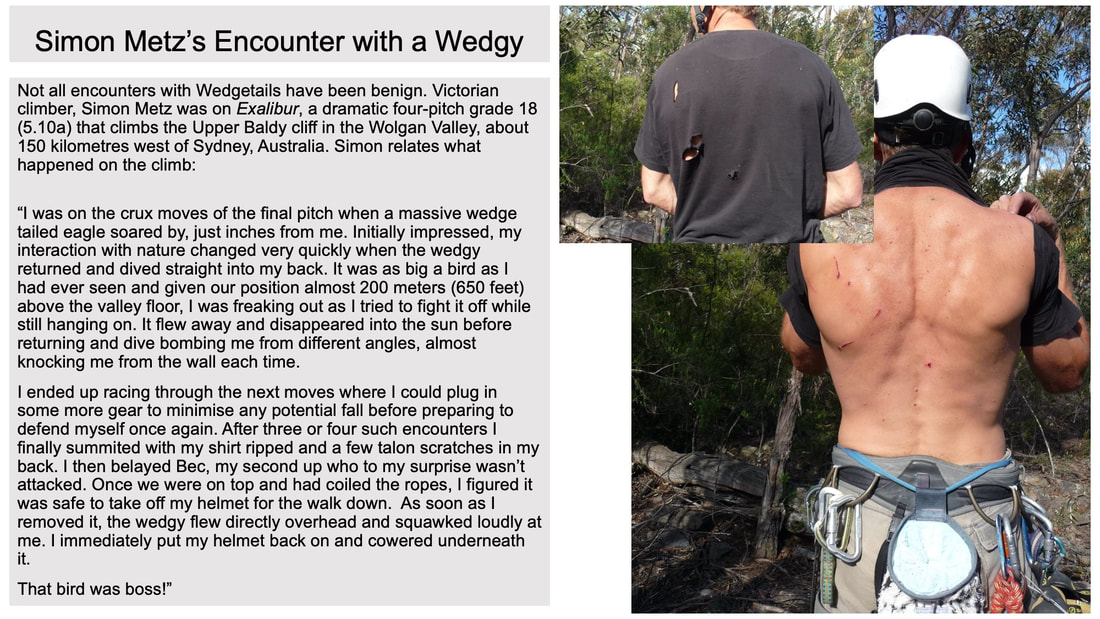 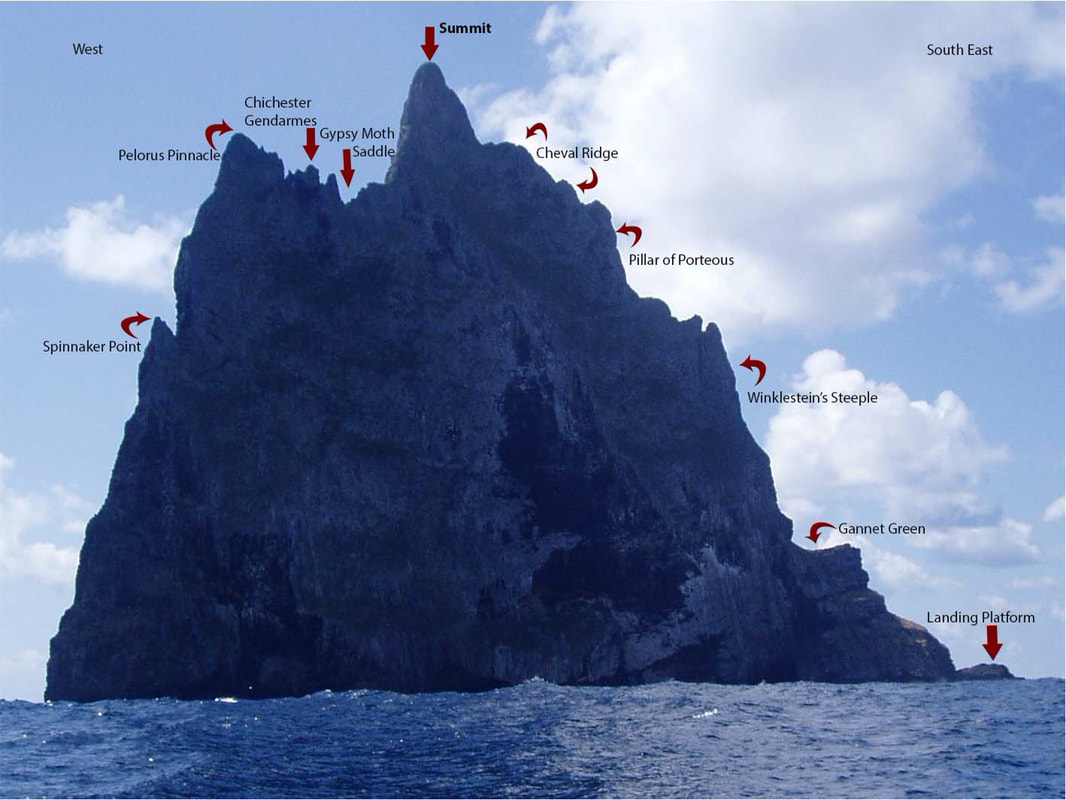 A labelled photo of Balls Pyramid's main features showing the names given to them by climbers since its first ascent in 1965. ( Photo Credit: Keith Bell, featured in Smith J & Bell K, "South Pacific Pinnacle: The Exploration of Balls Pyramid," Page 46.
Balls Pyramid, is a mediaeval citadel puncturing the Tasman Sea, some 700 kilometers north east of Sydney and about 20 kilometers from the nearby Lord Howe Island. Climbing and all recreational access to Balls Pyramid has been banned since 1986, in order to preserve the last home of a mysterious inhabitant – the rarest insect in the world but more about it later.

The air around the Pyramid is in constant motion as birds of varying types wheel, soar, or dive, displaying amazing aerobatic manoeuvres and stunts. Members of the French Expedition in October 1984 were so disturbed by the number of screeching, wheeling seabirds that they likened the Pyramid to a set from Alfred Hitchcock’s film, The Birds.

“The first night was hellish, the sea thundered continually and the birds that we disturbed came and sat on our beds with piercing screeches. We were in a full-on Hitchcockian environment!” (French Team)

​Indeed, it is difficult to take a photo without at least one bird or more appearing in it. 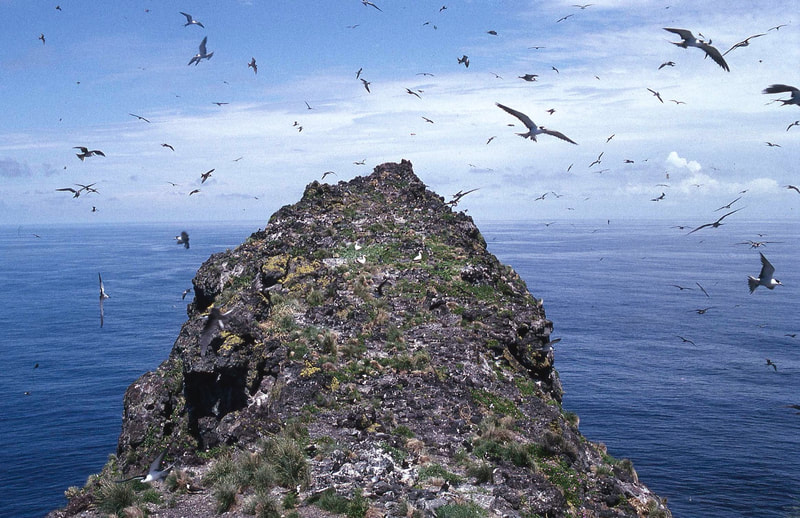 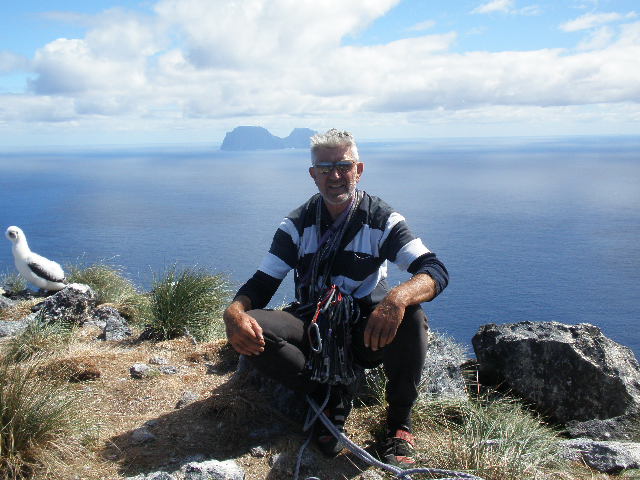 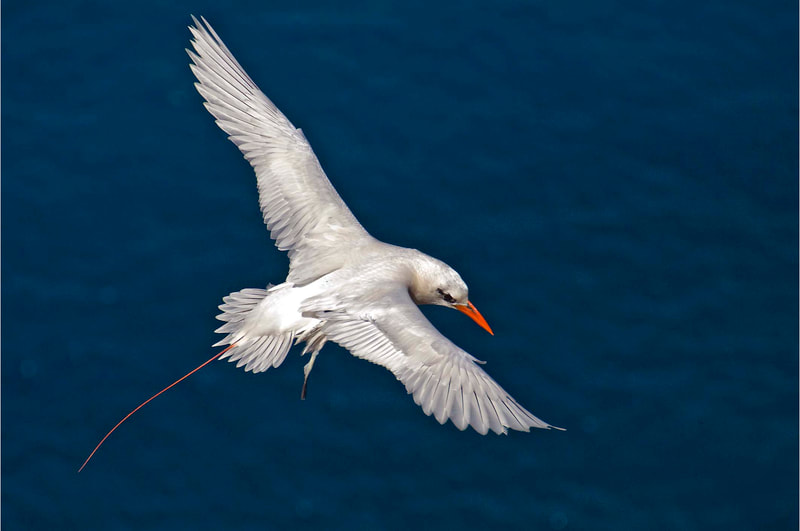 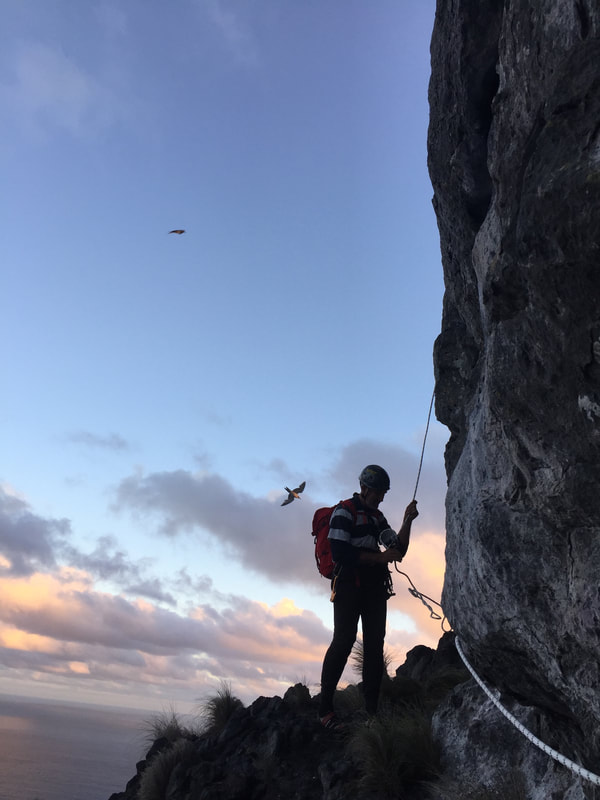 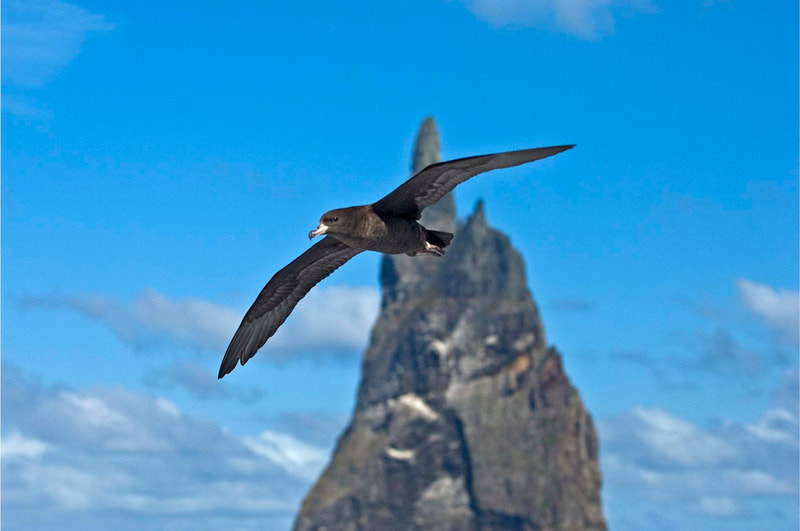 [Click to enlarge the above photos; Hover or click to see caption]
The crash landings of the birds created a hilarious scene on the last night of our trip. We had split into two groups to cook the last dinner, one in the small and cramped base camp cave and the others on the narrow ledges about twenty feet  below. The two people above were waiting for their billy (2) to boil when a Mutton Bird dropped in for the night. It alighted on the edge of the billy singeing its tail in the near boiling water then squawked, flapped and upset the billy off the burner. The top group desperately tried to save the stove, the billy, and the bird but only managed to salvage the former. The billy and its steaming contents plummeted towards the four climbers on the narrow ledge below. They scattered as best they could to avoid either being clonked, scalded or dropped over the edge. The melee finished with the pervading smell of burning feathers and a rather distressed Mutton Bird flying off into the sunset. Everybody fell about laughing (nervously) given the slapstick element of the situation, but then concern emerged for the bird as well as for one of our number who had lost the only billy that he had ever owned.

In 1973, I returned with Greg Mortimer to attempt the first skyline traverse and alpine style ascent of the Pyramid starting on its South East end, climbing it to the summit, then descending the West Ridge.

On the first ascent of the West Ridge in 1970, we reached a section called the Chichester Gendarmes (3), a line of decaying towers, the foundations of which were undermined by holes or windows eroded by wind right through the Pyramid. To avoid this section, we had abseiled down the Northern wall onto a convenient ledge that allowed us to bypass the tottering towers. A fixed rope was left up this steep wall to regain the ridge. I regarded that climbing this previously abseiled section would determine the outcome of the traverse as it remained an unknown quality. Was it climbable?

On our second night Greg and I had reached the summit and descended to a large open cathedral like cave near the bottom of the summit needle. On the summit the weather had been cloudy and windy but overnight it had deteriorated markedly. By the time that we reached the base of the abseil the weather had deteriorated further as the harbinger of an approaching cyclone (hurricane) was making its ominous presence felt. Rain, swirling wind and a crashing ocean almost 500 metres below would be ever-present companions on my attempt to climb the pitch. Little did I know that there would be other surprises in store for me?

All went well until at about the 80-foot mark I came across a sentry box that was difficult to see from below. As I began to move up past the base of it a red-tailed tropic bird (4) flew out of it into my chest, brushing past me in a flurry of wings and webbed feet frightening the crap out of me. I had hardly recovered from this scare when memories of Lieben came flooding back as its chick rushed across, then pecked my hand as I used the juggy edge of the sentry box for a handhold. This time, of course, I didn't toss the bird off.

Allowing my heart rate to settle I was able to continue on to attain the ridge. The key turned and we were able to complete the descent to the 1970 base camp cave to be confronted with one of the most ferocious nights that I have ever spent - anywhere. With barely enough room for the two of us with our packs, nylon bivvy sheets and nothing to tie to, we sat back to experience the full fury of Cyclone Kirsty which hit later that night.

“It was a maelstrom, an amazing release of natural forces – a great vortex of wind, water and birds, like a column hanging in the air in front of us and seeming to blast right over the top of the Pyramid. It was frightening!’ (Greg Mortimer) 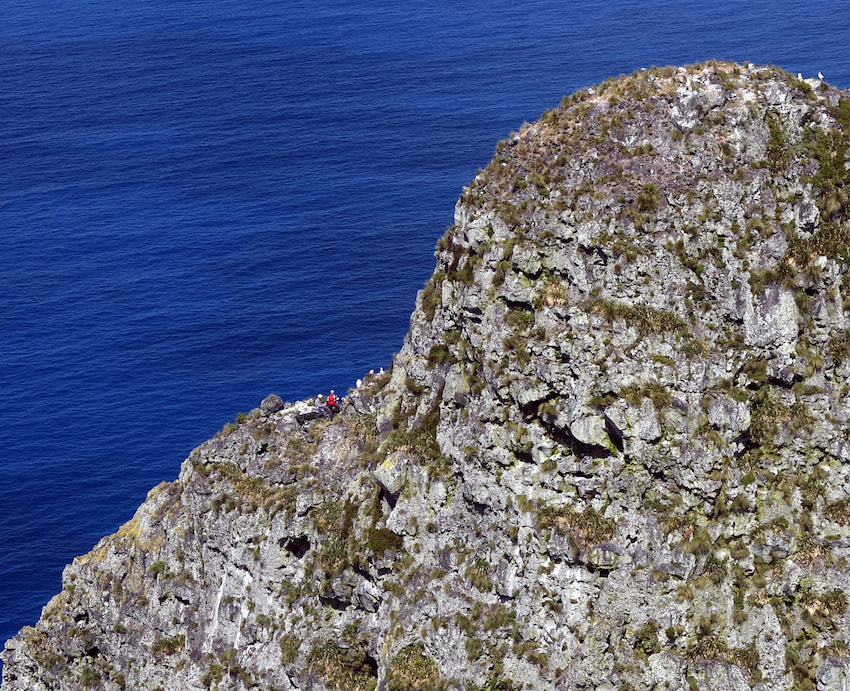 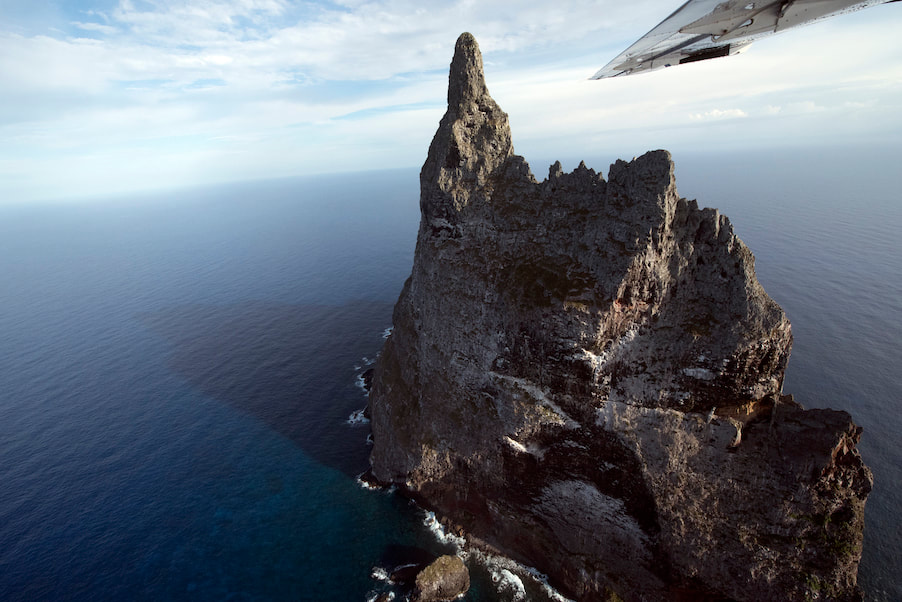 The author would like to specially thank the Australian Museum for the use of photos taken during the AM Balls Pyramid Scientific Expedition in 2017.
A special thanks should also be given to Ian Hutton, Curator of the LHI Museum for freely allowing me to use his amazing photos of Balls Pyramid
and its birdlife. Ian was an supporter, organiser and valued member of the AM Expedition.​