By Stefani Dawn ​​
I navigated my way up and around boulders, stepping past a baby rattlesnake that could barely move in the chill of the windy morning. The three men at the top had easily navigated across an exposed section of the approach and gotten to work. I hesitated and thought too much about the consequences of the slip of a foot.

After finally mustering the courage and making the step, I could see the men’s bodies huddled around a strange looking, bolt-pulling contraption. They had already previously replaced one anchor bolt and I could now observe them getting ready to pull the second. 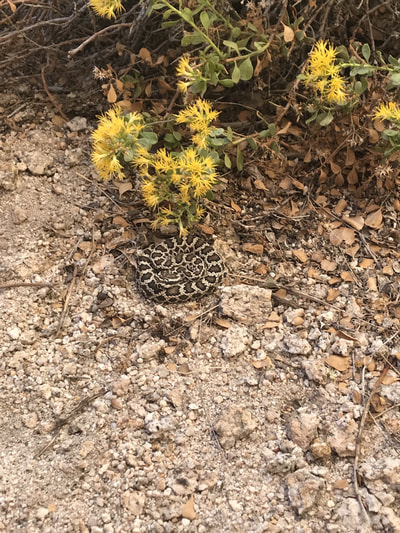 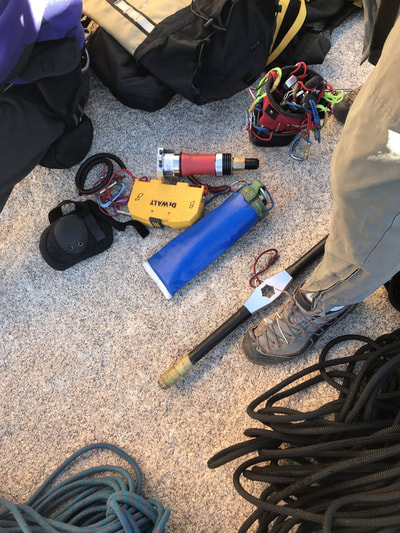 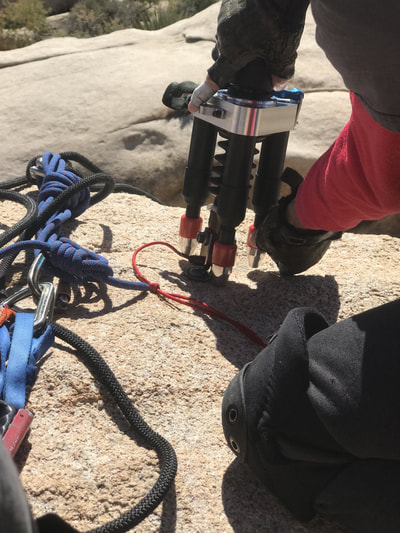 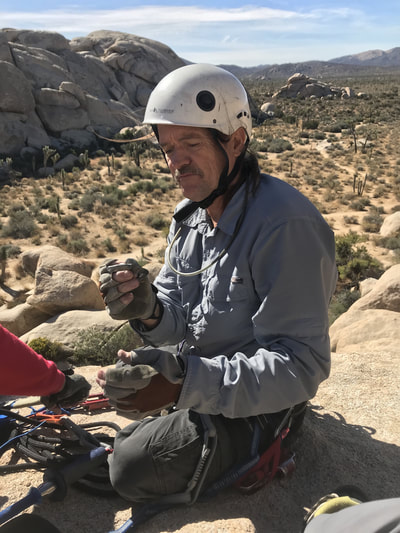 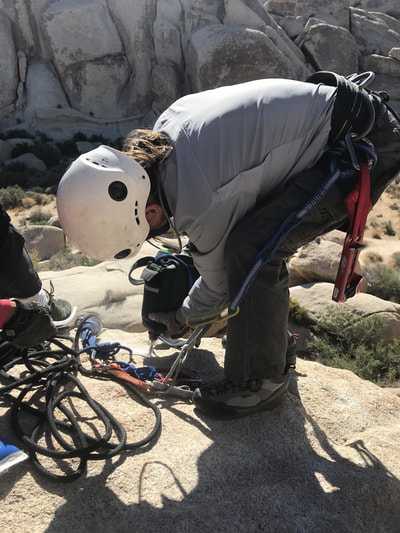 Kevin Powell, a long-time Joshua Tree local and old-school first ascentionist, clipped into the new, 3000-pound-rated anchor bolt and hangar, then positioned himself over the machine to pull the second anchor bolt. Kevin cranked, then, with very few turns the bolt slid from its rock encasement.

“Hey, lookie here, we’ve got ourselves some hardware store mank!” Kevin announced with the enthusiasm of someone who has found a treasure.

I laughed, and, with some Beavis and Butthead-esque overtones, I repeated the words “hardware store mank.”

Kevin twirled the old rusted three eight’s-inch split shaft bolt between his fingers. “This beauty came out with only a couple of hundred pounds of force.”

I studied the chunk of metal and pondered how little force it took to pull it out. In reality, less force than some climbers weigh! Fucking scary.
We are at a crag called Hall of Horrors. The other re-bolters are John Lauretig, a Board Member of the Friends of Joshua Tree, and “IE,” who is the creator of the magnificent bolt-pulling device. (IE apparently stands for a multitude of names including Idiot Enterprises and Ignoramus Extraction both of which are a complete dichotomy to the engineering brilliance that went into creating the device.)

Today, the three men work as a coordinated team and set up fixed lines off the newly replaced anchor. The goal is to rebolt two climbs on this partially overhanging wall. (They replace the bolts 1-to-1 with a permit, as required by JTree regulations).

I feel privileged to hang out with this group, seeing them at work, and hearing their thoughtful (and not so thoughtful) conversations. Kevin, John, and IE epitomize the term “community members.” And, they are fucking hilarious – a testosterone-filled banter-fest with no attempt at political correctness. I was glad my female presence didn’t appear to hinder their self-deprecating entertainment, as it was like a Comedy Central Improv theater.

After the anchor replacement, Kevin rappelled to the ground, dug around in a bag, and realized they were missing a tool for the next steps. He told the team he was headed back to the car and asked if they needed anything else.

As Kevin hit the trail, one of the guys piped up, “Hey Kev, you gonna wear that helmet all the way back to the car?”

Kevin turned around with his half-cocked helmet and said, “You don’t know what the fuck you are talking about. I have a bad-ass reputation to uphold. There are chicks back there who will swoon at the sight of me in a helmet. I cannot disappoint.” He turned and proceeded as he was.
Upon Kevin’s return (helmet and harness still in tact), IE fired across Kevin’s bow, “What took you so long? Did your walker get stuck at a bump in the trail?”

“Hey! I had some ladies to tend to. Far more important than you clowns. And, don’t give me shit about my walker. That is a badass walker. I soloed up Walk on the Wild Side with that thing.”

IE was already hanging on the fixed line working on the lower-most bolt. “Well, get over here with that tool Powell, my nuts are getting crushed hanging too long in this harness. Damn, I should have brought my full-body harness for this route.”

“I don’t want to hear about your manky nuts. Save it for someone who gives a shit.”

Like climbing, bolt replacement is not really a solo act. There are so many tools, it is a multi-person effort in and of itself just to lug supplies from the car to the climb (take your regular climbing equipment and multiply it by a weight factor of 10). Then, by the nature of the climbing terrain and how things unfold, some routes require multiple people to re-bolt. This climb ended up being one of those, with a difficult and awkward overhanging section and a bolt that decided to break.

The broken bolt significantly complicated matters and Kevin jugged up the adjacent line to serve as a surgeon’s assistant.

As Kevin approached beneath IE, he said, “I’m coming right up your ass, so watch out.” IE quipped without a pause, “Well that’s your problem, Powell, I forgot to put on my Depends today.”

John pulled the base of the rope to get IE closer to the wall and said, “I’ll just stay in the safety zone right over here.”

“Oh no John, you’re not getting out of this that easily.” Kevin shot back, “You’re time is coming.” 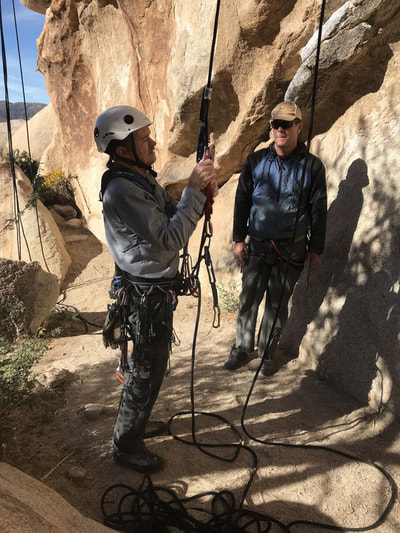 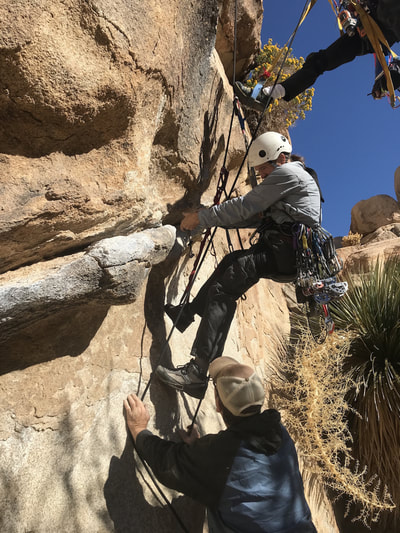 After several hours of hard work, the bolts were successfully replaced for a single climb. Although it took considerable effort, they were able to do it without having to drill any new holes. And, although they joke like juvenile goofballs, these guys are not half-assed. They approach the work with the utmost integrity, knowledge, and seriousness.


These are the people you want re-bolting climbs and teaching the next-gen re-bolters.

At the end of the day a pile of rusted, unrusted, whole, and broken bolts accumulated next to their bags.  Kevin pointed to the pile and said, “You see that? You tell me, what’s behind the hangar?” He paused for a moment. “You never know. You just can’t tell. I’ve pulled shiny, new-looking hardware with barely a tug. I’ve had trouble extracting things that looked like rusty pieces of shit on the outside.” 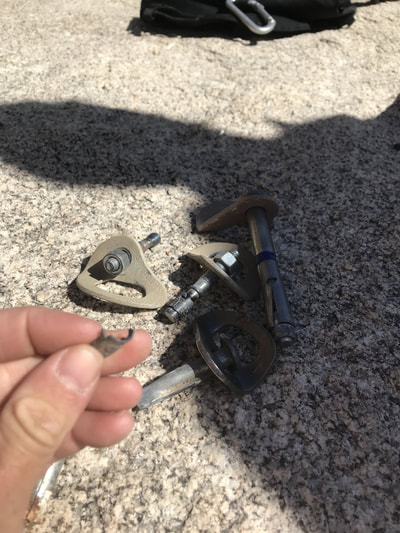 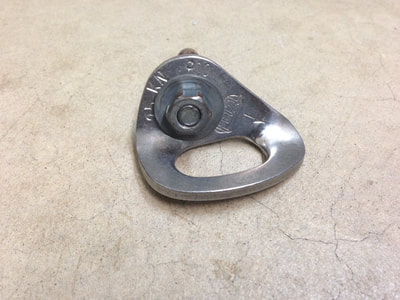 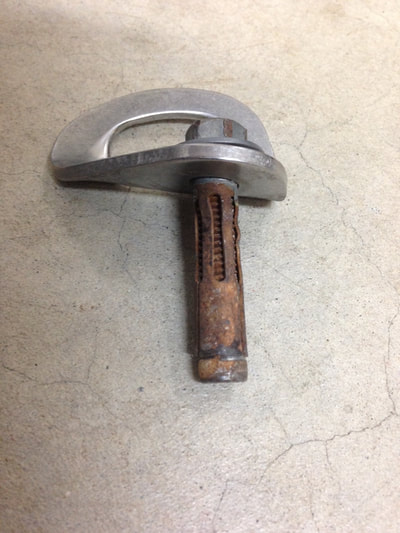 The bottom line is it’s unpredictable. You cannot tell what is behind the hangar.

Some re-bolting days go fast and they can replace upwards of 20+ bolts. Other days, like today, they get a bitch of a bolt that happens to be on a crappy overhang and one short route is completed. But like anything that occurs with consistency and dedication, over time the efforts add up -- hundreds of routes and thousands of bolts have been replaced.

But if you climb at JTree, don’t exhale yet, as there are thousands more routes and bolts to go. If you ever clip a bolt, this IS something you should care about.

ABOUT BOLT REPLACEMENT AT JOSHUA TREE: Replacing bolts is expensive ($8-12 per bolt/hangar combo!). It is also time consuming and a significant personal commitment. The current bolting hardware being used for replacing is provided by The American Safe Climbing Association while support for other related equipment is provided by the Friends of Joshua Tree, Access Fund, American Alpine Club, Nomad Ventures and Petzl. Some of the volunteers contribute their own monies as well, like IE, who has personally overseen and funded the creation of the bolt puller, dedicating hundreds of hours and thousands of dollars to testing, building, rebuilding, and retesting prototypes. The materials used to make that device are not cheap. Kevin Powell has personally replaced hundreds of bolts at Joshua Tree and other popular California alpine crags like Taquitz and Suicide Rocks. John Lauretig has been a part of the Friends of Joshua Tree for many years, participating in JTree search and rescue, and has more recently expanded the organization’s contributions to re-bolting efforts across the park.

Readers should know that the need to replace JTree bolts far exceeds the resources to do it. If you love Joshua Tree, then please donate to the re-bolting efforts – be it in money or time. You can contact the Friends of Joshua Tree to learn more about how to get involved. And, if you donate to the Friends of Joshua Tree, you can request that your funds go specifically to re-bolting. You might also consider donating to the American Safe Climbing Association who helps fund re-bolting efforts across the U.S.