By Matt Tredway
As we gained the 2nd pitch, l was beginning to settle down.  Still sweating, but breathing regularly, the climb had started to flow.  The rock was positive, and the solution pockets more than made up for the lack of splitter hand jams.   Truth is, l had climbed a lot during the summer, but during the last couple of weeks my focus was more about backpacking - and eating.

Crosby Perry Smith had encouraged me to chase down more European climbing.  Crosby, a Steamboat, Colorado local, had grown up skiing and climbing in the Alps. His father, Oliver put up hundreds of first ascents, and taught his son well.

We discussed the Dolomites of Northern Italy at a slideshow during the winter.  When you get a nudge from a former 10th mountain division hero, you should heed the task.  So, Dana, my wife, and l embarked on a 90 kilometer hike through the Dolomites with the plan to climb and explore arguably some of the planet's most striking landscape. Reinhold Messner, the Michael Jordan of mountaineering, described the Dolomites perfectly;  “Each mountain in the Dolomites is like a piece of art” 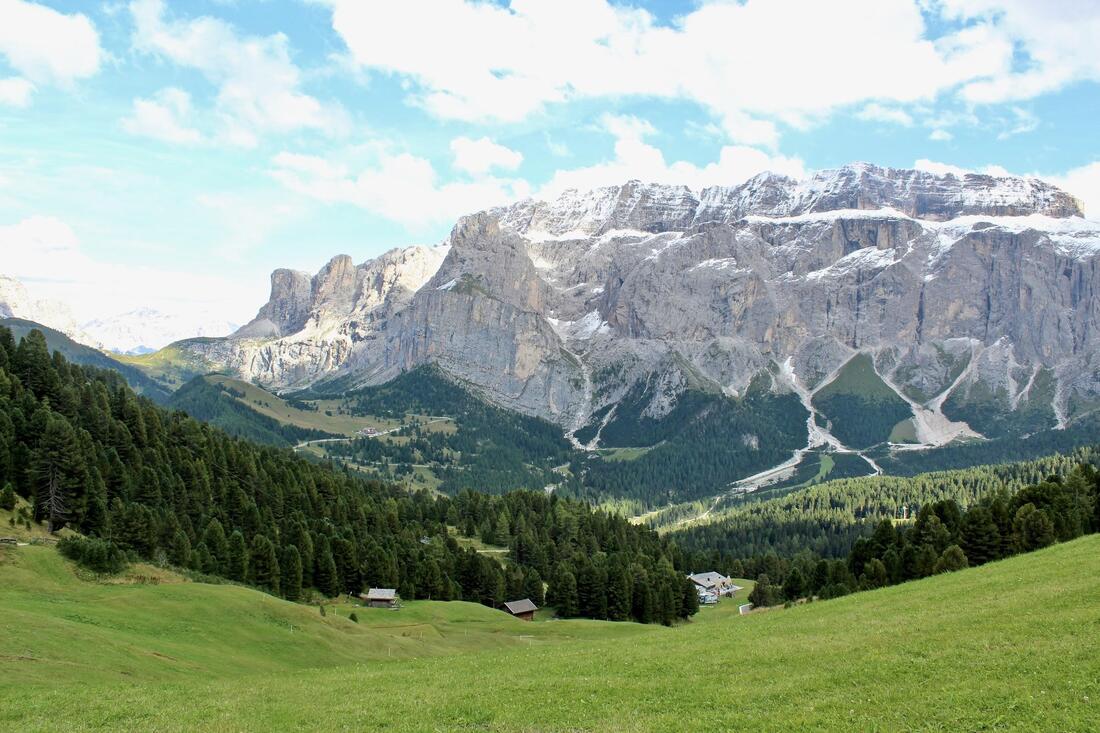 For this trip, I knew that I had tight windows of time to climb. And while taking time to explore is sublime, this trip needed to be surgical.  Just a day here, and a day there to get on the rock.

On those days, Dana would be happy to wile away time in some quaint little village sipping tea and looking through the stores.

My Italian climbing partner, Stephan, was a friend-of-friends. We had organized this climbing outing weeks earlier, but  Stephan and I had just met the evening before, after I arrived  by foot in his village, Selva.

​Climbing in Europe was not a first for me, neither was climbing with Europeans.   An expedition to Cho Oyu years earlier had placed me in the middle of a strong contingent from Chominoux. I remember feeling as though I was at track practice trying to match their pace each day.

Stephan ended up being no different than the other European climbers l had shared a rope with, and our approach quickly escalated into an event by itself.
The evening previous, when Stephan and I talked in depth he asked, “What are you up for? Are you a sport climber?”

The question felt loaded - I do sport climb, and like it, but probably do more trad.  I replied with “Whatever you think."

The 45ish, burly Italian scoffed, and said, “Those sport climbers. They are like the kids today… too lazy to buy the sausage and cut it up…  they want it pre sliced. They want to have hard grades, a planned route, no thinking, and don't even look around at the views!”

I gulp a little, and nodded, knowing in the back of my mind that areas like Shelf Road is a sport crag I've climbed a couple times a year since forever.

“I can assure you that l am not chasing grades,” I offer.  “I would prefer a long alpine sort of a route.  An arete, with plenty of exposure and lots of pitches.”

That did not seem very specific as I looked in a circle at the jagged cliffs that surrounded the town -- and region for that matter.

​So much rock, and big faces.  Lifetimes of routes.
In addition, l hadn’t even included a tent or stove in my pack; Rather, we were  sleeping in comfy inns each evening and eating great food in their dining rooms.  So, my legs were fine.

​When we arrived at the base of our route we saw the other team. Two Italians, both in their 20s, and in the flashy attire.

I can recall that the Europeans of yesteryear used to dress like the UPS delivery guys…  not so much any more.  These guys were styling.   Even from a couple pitches away, they stood out.  I felt woefully drab. Like the female peacock rather than the strutting male.

There, at the base of the climb, was the smell of rock, mountain air, sweat from my drenched shirt, and wet grass. I had that familiar pre climb knot in my stomach, the one l feel before each climb, and first experienced at age 10.  So many decades ago, l was staring up at a crack in Taylor Canyon in Gunnison, Colorado. It seems like after all this time that feeling would have run its course. After 50 years, It hasn’t.
I am washed by another adrenaline surge.

Stephan started his dance upward. Clean, quiet, and efficient. I soon followed. The holds seemed to be everywhere from the ground; Funny how they disappear as you climb.

​I would soon see that pitons, like time markers, were dispersed up the route.  They had the look of a Neptune Mountaineering display case (a classic mountaineering shop in Boulder, Colorado.)

And then there’s the wood -  couple of oak pegs had been pounded in in larger openings, and choked with perlon. They were there, the old rings, angles, and those two stakes - all being used.  We encountered at least couple per pitch, as well as at the cruxy points, as if to calm my soul. In the runouts, cams were placed in the horizontal solution pockets, like some of the cracks in the New York Gunks. 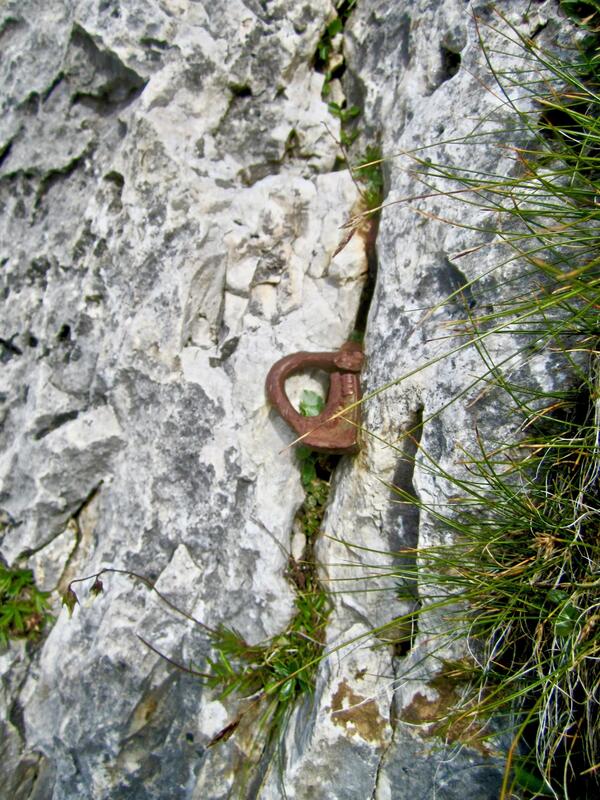 We tied into an anchor of pitons that l imagined had been pounded in decades ago, and backed them up with a cam.

On that belay ledge of pitch two, I had “come to,” as it were. I experienced that feeling that everything makes sense. It’s the time that the chatter in the head stops and you live in the present.

We were already high above the valley floor with a falling slope below us. A splitter day, perfect temperatures, and a hunk of rock that seemingly stretched endlessly upwards. In the distance there were seemingly never ending waves of rock faces.

​Gazing outward, you could easily make out the myriad ski runs and lifts.  So many lifts.  The Dolomites have been connected by almost 500 gondolas and chairlifts. It is possible to begin skiing on a morning in one town, and end up in another town, miles away from your origin. And with the elevation being so low, the runs were green pastures full of cows rather than the talus slopes that we are accustomed to seeing on a melted out ski area in the Rockies. 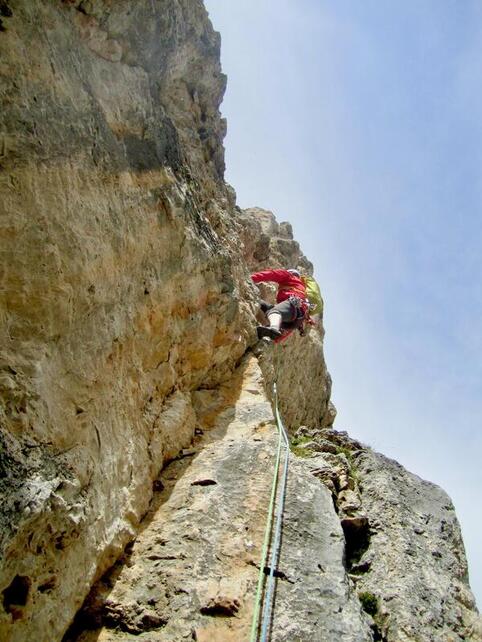 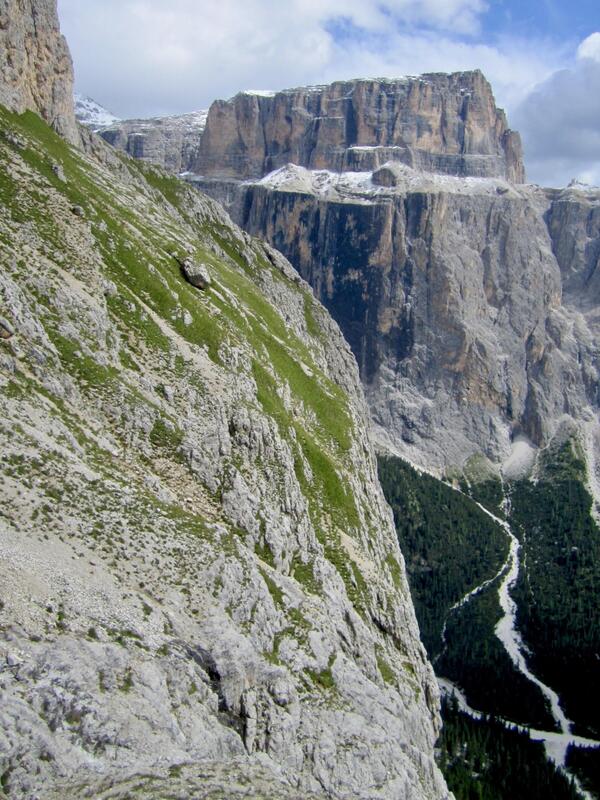 * Where are the Dolomites?  Northern Italy
* Best time to climb: July through September.  Massive ice during November through April
* Gear required: Standard rack
* Recommendation of guidebook and or guides : Dolomites, West and East
* Any other tips for a safe trip:  Look into Refugios or Boutique hotels. Not much camping
*Best local beer: Sirrifico Italia Nos Tipopils
​