Lost and Found:
​A Mini-Epic in Paradise

​By Saxon Johns
The year 2000 had arrived. I was with a bunch of friends sipping water on Bondi Beach listening to Carl Cox, far from our computers. The word in the tech community was that the whole world might glitch on the Y2K bug. As we listened to the digital music we wondered if it would end at midnight, struck down as the planet’s computers crashed. There was a pause, but it was just the DJ playing with us, and then music continued, and our minds strayed to the year ahead – the new millennium.

Where would we go, what would we do…? Then Craig came up with an idea. “How about Thailand,” he said, “climbing above the beach on pristine limestone?” It took a couple of days for the idea to sink in but soon we found ourselves at the travel agent, booking tickets quick smart.
“This place, Railey Beach, is siiiick” he proclaimed in his skater lingo. “A climbing mecca which is cheap, easy to get to from here, and relatively quiet.”
Seemingly in no time we were barreling down the stairs in Singapore airport, our stop-over on the way to Thailand. Our cab driver, in perfect Singaporean English, started ranting on about French Ticklers, and we cackled on, knowing this would be a hilarious trip. After some electronics shopping, a trendy bar, and a wander down the main drag, we felt like we’d had our micro-dose of Singapore and were ready for the real adventure.

In no time we touched down in Krabi to screeching tyres and hopped on a long-tail boat. Craig had undergone a manic negotiation with the driver on boat fares and we’d settled on a figure that kept both parties happy. It was a decidedly utilitarian welcome to Thailand and a less than idyllic introduction to this otherwise paradise we’d landed in.

The long-tail putted around the jungled shore. After an hour or so we saw the collection of huts on Railey East. Being low tide, we waded onto the beach with bags carried above our heads, safe from the corrosive salt water. We had arrived. 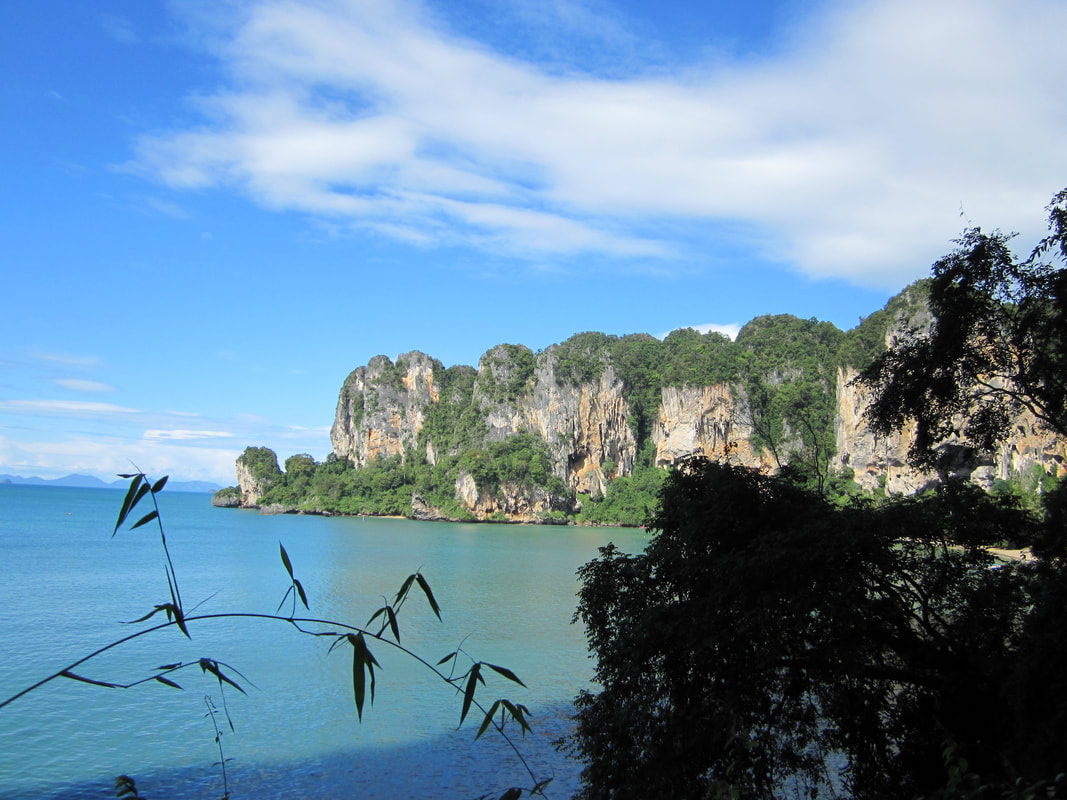 Tonsai Bay
​Craig had been here before, years earlier, and knew of some novel accommodation - an insider tip he’d received from an American climber who used Railey as a base and would do runs to the Cambodian border to renew his visa. The room we finally rented was up a ladder, actually built into a tree, with slender posts supporting its perimeter. Craig had attempted to get the best deal for us and chose a room with only one bed, a double. No dramas, we’d shared plenty of tents in our time climbing together and had no qualms about sleeping next to each other, just so long as the snoring was kept to a minimum.
We’d been focusing on the routes on the beach, but one morning we both found ourselves gazing into the distance, looking at the spire of Thaiwand Wall. We grabbed our gear and set off through the jungle, sweating. We’d chosen a classic 23 (5.11d), Circus Oz, put up early in the place’s development by Malcolm HB Matheson, a stalwart of Grampians/Mount Arapiles climbing in Australia.

After some amazing pitches on pristine limestone we neared the summit, and I embarked on the last pitch, a “cruisey” 21 (5.11a) - according to our memory of the guide. With some grunting and chicken-winging I made it to the final belay on the summit, “Geez that felt like a Sydney Sea Cliffs 21 (5.11a+++)”, I muttered. I later found out that we had gone off route and had ended up on Lord of the Thais, this last pitch being the crux, a 25 (5.12b)!
Craig fell on 2nd, swinging out into the void, cursing. A tired battle ensued, and I watched him fight his way back onto the wall, and fall, and fall again. Finally he got though the crux and romped the last section to join me on top. At that moment the sun set and left us in pitch black. There didn’t even seem to be any twilight, just this sudden fade. We knew then that this was going to be no ordinary day at the crag – we still had to rap down the multi-pitch overhanging route in the dark. Several blind abseils later, terrified and tired, we reached terra firma and kissed the solid ground.
​Then the real Type 2 fun began. We pulled the rope, stuffed it into our bag and glanced around, or at least tried to because at that stage, in the jungle, we were totally invisible to each other. “Look out for cobras”, Craig whispered helpfully. “Thanks, man,” I replied.