​Shit Happens – Or, Why You Need a Walkie Talkie

(a) Only use certain specific commands because they don’t share the same vowel sounds and number of syllables. Hypothetically this allows the commands to be differentiated from each other when they otherwise sound like a garbled mess in wind (for example “up rope” has two syllables with a hard “uh” and “o” sound; Or, “off belay” and “on belay” have three syllables with long “o” and “a” sounds; Or, don’t use the word “safe” because it sounds like “take” and safe is not a command telling your belayer what to do. You get the idea.)

(b) Then there are the “discussions” about what to do if you and your climbing partner can’t hear each other at all. Many suggest creating a convoluted rope signaling systems (one big looong tug  if … two big tugs if… tug, relax, tug tug tug, relax, if you are bonking and need time to eat a sandwich.)
​
If you climb enough multipitch, I can promise there will be a shit-ton of instances you won’t be able hear each other yelling commands (even if everyone else in the canyon or valley can hear you…). And, I can also promise that attempts at rope signaling will only result in range of emotions from befuddlement to panic. The reason why is because you can’t tell a rope tug from a climbing action. Also with enough friction you won't be able to feel tugs at all!

For example, there have been plenty of instances when my partner spent a long time at a difficult section of the climb trying to figure out the moves and/or the gear placement. The long delay might make me think he has arrived at the belay and is building an anchor. Then, when my partner decides to finally make the moves, the rope jerks quickly because he desperately wants to clip that piece of pro he just placed (which on my end looks like a big tug). But, he misses the clip and the rope drops fast, then he grabs the rope (out of even more desperation perhaps) and rapidly tries to clip again. This looks like another big tug. If we had agreed that two big tugs means “off belay” then my partner would be fucked.

Yes, there are ways to make sure you and your partner are always secure when you can’t communicate. Such as, DON’T take your partner off belay, just keep feeding rope through the belay device until the rope reaches your tie-in. Then don’t start breaking down the anchor until your end of the rope is tight, it stays tight, then gets tight again when you start to move upwards to clean the anchor. This is a really good fallback system, but it is super inefficient in a multi-pitch scenario where saving time is important too (but time is not as important as remaining secured.)

Frankly, the simplest way to deal with communication on a multi-pitch climb is to get a freaking walkie talkie. Not only does it make climbing more peaceful (no yelling!) and relaxed (no wondering!), it makes it waaaayyy safer. If you do enough multi-pitch climbing, unexpected shit WILL happen. If you have a walkie talkie you can easily figure out how to handle it with your partner. Let me share one small-but-not-so-small example with you.

My hubby Rick and I were on a trad climb that had newer bolted anchors (previously everything was tat). One of the comments in Mountain Project was that you could now rappel the route with a single 60m rope.

We were climbing with our twin 60s. On the last pitch while belaying Rick I noticed the halfway point of the rope went at least 10-15 feet beyond my belay device (which indicates you can’t rappel with one rope). When I made it to the top of the climb and we were setting up for the rappel, we made some decisions. Since this route was a known “rope eater,” and recalling the Mountain Project 60m-single-raps-comment, we decided to do multiple shorter raps with one rope. This reduces the risk of the rope getting caught in the rock and, if it did, we’d have a spare. I commented about the rope length, but we also noted that Rick went off route, going out left onto a face for a bit, then back right to the bolted anchor. We presumed that deviation would account for the extra rope being used.

Rick went first on the rappel. Then I hear these words come across my walkie talkie (actually it’s a Rocky Talkie…) “Uh Stef...I fucked up. The rope doesn’t reach the next set of anchors.” Ooops. (BTW, we ALWAYS tie knots at the ends of our rope on rappel – and rappel saddle-bag style if there is risk of the rope getting caught in cracks.)

So, here’s what we did:
Could you imagine trying to work that out by yelling?

Worse yet, could you image trying to deal with that situation if you couldn’t even hear each other?

Plus there are so many ways this situation could’ve been more complicated. What if Rick needed more gear to build his anchor? With communication, I could’ve easily sent gear down the rope to him. What if Rick was the one with the second rope? We could have easily worked that out too. And, yes, without a radio he could’ve Prusicked his way back up, but he was near the bottom of the rope, Prusicking would’ve been exhausting and taken forever, and it was already getting dark.

You can do your best to plan a climb (we thought this would be SO straightforward – it’s bolted anchors for goodness sake!), but shit happens.

Frankly, walkie talkies should be a standard piece of gear on every multipitch climb. Not only can they help prevent major epics, they can help with little things like “I’m gonna take a while here, this piece is stuck.” Or, they can even allow you to have a little fun like “Rick, that’s me… good thing you aren’t here right now because that fart I just let out is so bad…climbing.” 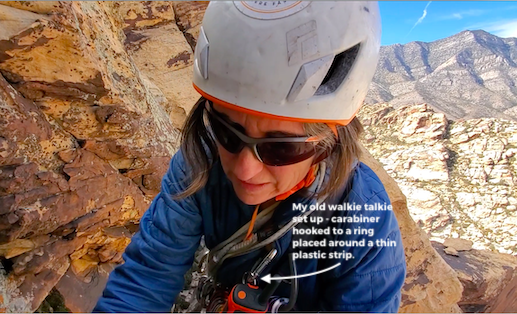 A Shout Out to Rocky Talkies

Rick and I use walkie talkies a lot - both for mapping (our business is Climb-On Maps) and for climbing. We recently picked up the new Rocky Talkie system. Here's our two cents on them: