By Dave Barnes
Photo Credit: By Benjamint444 - Own work, CC BY-SA 3.0
Australia -- the land where walking out your front door means you may  be bitten, stung, or even killed by any number of critters on land and any number of weird looking things in ocean. In response the folks are built tough down-under and the climbing community is no different. You think I’m being melodramatic? Read on.

In my early days of climbing we would head down to the crags of Southern Sydney in the morning. Bleary eyed, smelling of cheap wine and cigarettes from the night before. It’s nice to have crags close to home.  Whilst my mates would be  sleeping off a hangover I would be getting my ropes and harness sorted before  throwing them into the back of my car.

Sydney spreads across a  huge basin with the mighty Blue Mountains on its Western side and the Pacific Ocean on its East. Rivers have washed through the sandstone to form craggy playgrounds for climbers who can’t find the time or the energy to make it to the Mountains. As they say, “Itlldo.” (Translation - that’s good enough)

I had been working on a new route at a crag called Blue Bell, in the Shire, South of the City. The Saturday morning urban sprawl sounded out lawn mowers which filled the ears at the top of the crag whilst down below was eucalyptus forest as far as the eye could see. Mornings are a peak time for climbing in the eastern states during Summer.  Climbers clamber to get the best routes done and dusted before that roasting Australian sun lights up your cliff and grills you like meat on a barbecue.
​
My project was looking good; it was steep, it had shade, and I was ready. I liked the way my brain built confidence as it eyed each sequence required to get up the thing. My muscles started twitching knowing what was coming, as did my head that was recovering from the noise of the pub not many hours previous. I stooped as I stepped down old wooden ladders to the base of the crag. Then I was on Common territory. I was hungover and Blue Bell was overhung. We were an odd couple that morning.

Squinting up at the the line I knew these moves. Drinking some water then looking down I tightened the laces on my lucky boots. Rising, I shook my arms like an Olympic swimmer about to race, stretching my un-lean and un-mean torso for the contortions to come.

First ascents at the horizon of your ability are a landmark that climbers don’t visit often (particularly after marriage and children - but that’s another story). I had a lot to take in and as much to let go before I attempted this one. My head was clearing and I had stretched last nights dance moves out of me.

Talking to my inner rock-god was much better than acknowledging the tension in my forearms.  My climbing partner, Chris "Wobblebuns" Wallace, passed me a lit cigarette which assisted me to calm-my-farm.  Smoking was the thing before Zen and/or Red Bull. I needed something, courage in a cancer stick. Youth. Sipping some water from the recycled Coke bottle I was ready.

“Centre Dave.”  Chris knew my  tension. This route was at the edge of me. Breaking through this crux would yield me new ground, stoke my fire, grow hairs on the chest of my inner child.

Here I was, present, standing under the bosom of this mother of Sydney steep climbing. Finally it came - calm. This is what I was I was waiting for.  Chalking up, rubbing the white stuff into sweating hands, breathing in good vibes, exhaling the bad ones. Chris leveled the moment.

I had climbed consistently that summer and had dogged the moves of this climb but hadn’t linked them. Starting up the initial move I was solid, however if this was the warm up after one move I was there. It was going to be 40 feet of power, so I started the first cranks and cross overs cautiously, shaking out at a cheeky knee-bar for rest, feeling clever. That ended quickly.

Looking up the steepness of the route gave me whiplash. I flung my neck back to begin the next set of moves, flexing muscles to grind on through. Muscles only young men have.

Things were going well, Chris was talking up encouragement like a TV evangelist telling me to stick the moves and execute with confidence, “Common Dave, you’ve got this.” The Serenity Prayer of climbers.

Two thirds high in the thickness of the steepness I had passed the crux. It was a mixed bag of small holds on orange stone that left a little wiggle room for the feet. I secured a horizontal break to catch a straight arm rest. I sensed confidence breaking through  but the burn was making its way from my forearm to my bicep to my brain putting a lid on that sense. Calm would keep my climbing. “Think fast but don’t forget to exhale those negatives.” I thought - thinking down would not help me climb up to the chains.

I matched hands on the break and pulled up for the next clip and in that movement my eyes passed the horizontal crack that I was holding.

Not more than one foot from my face I saw the outline of something brown but wasn’t rock, it was something scaly, something that mothers and Steve Irwin told you to stay well away from.  It was a Tiger snake! A highly venomous slippery sucker. The snake was obviously having a snooze, snuggled up in front of me.

A vision of being bit in the face by a venomous snake was flashing red flags in my head.

I shouted out to Chris.

Just as I said that the snake awoke and was now alerted to my presence. My shaking hands must have rattled it. The snake’s black eyes met mine, it moved and so did I. Without hesitation I jumped out of my own skin screaming like I had seen a ghost, taking a whipper worth an Academy Award for drama.

On being lowered to flat earth there was me hopping around patting myself down looking for bite marks and screaming expletives like Bruce Willis in a Die Hard Movie. Chris, by this time, was on all fours laughing at me. I soon joined him as we both talked on buying lottery tickets thinking this was my lucky day, intermittently looking upwards at my climb thinking, What now?

This was not the end of it and I was totally dialed. Like the conviction of a dog that had found its prey, I pulled the rope and scrambled around to the top, anchored the rope, found a very long stick - thick enough to hurt Arnold Schwartzenegger with -  and rappelled.

Here I was again, but at stick distance from the horizontal break.  I could see scales of the snake’s snake or whatever you call a snake’s body, knowing that it’s fangs were not far away.

With sweat on my brow I addressed the snake.

“There’s only room for one on this climb - buddy.” 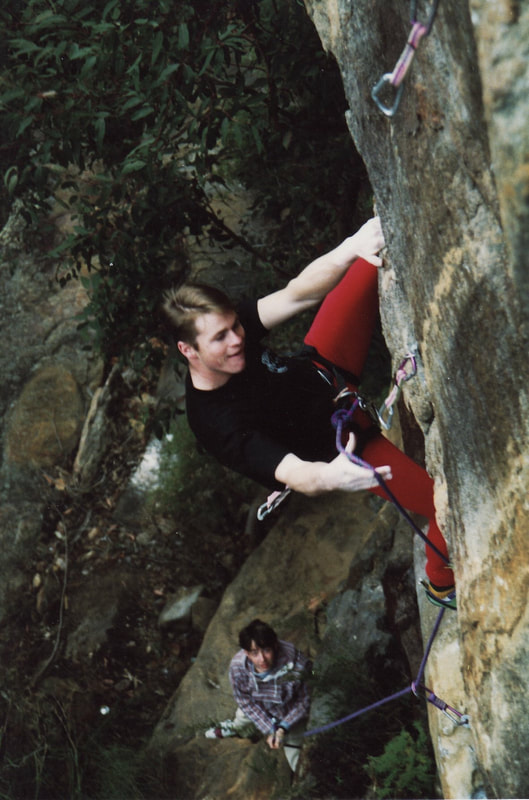 The author on the adjacent route "Welcome To The Body Shop" (5.11a). 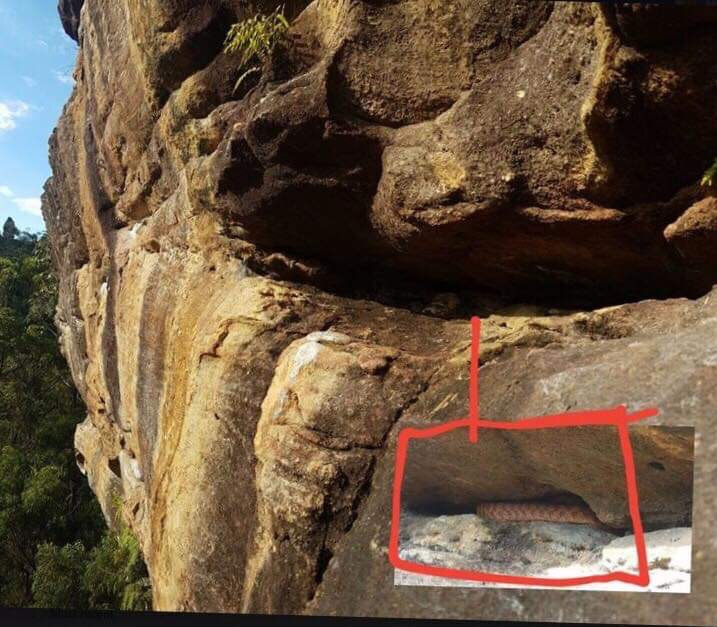 Photo of the route "Bitchin'" and the resident snake before it learned how to fly. Photo credit: Gino Lagazio.
Above photos: Click images to enlarge and view captions
I maneuvered my big stick and eye-balled the snake’s location like a cat to a rat. I hooked my stick underneath the snake and then I swung that stick like I was teeing off in a golf tournament, in the direction of the valley.  There, in front of me, came the most remarkable climbing vision I have ever experienced - a snake literally flying through the air, at its flying apex, 60 feet above the gully down below. I was in awe as I watched its trajectory, then heard it Kamakazi into the scrub way down below and slither away. Just thinking about it still sends my limbs into a quiver.  Who’d think it?  Reality has a weird way of making climbing bite.

So there you go.  Climbing in Australia.  Glorious days in the morning shade and sweat fest afternoons in shimmering heat and snakes, deadly. I’m with Indiana Jones on this one, “I hate snakes.”

Enjoy your visit to the land down under.  You’re gonna have one hell of an adventure. Just remember to pack your underwear.

Oh, by the way, we did return and I completed the route cleanly, snake free and named it, Bitch’n (5.11d).