Bryden Allen arrived in Australia [in the early 1960’s]. With him came alloy karabiners, P.A.’s [friction boots], double ropes and his experience on many hard climbs in England. Bryden’s dynamic attitude and skill forced many great lines in The Grose, Warrumbungles and other cliffs." (John Ewbank, Rockclimbs in the Blue Mountains, 1967, Pages 6 – 7) 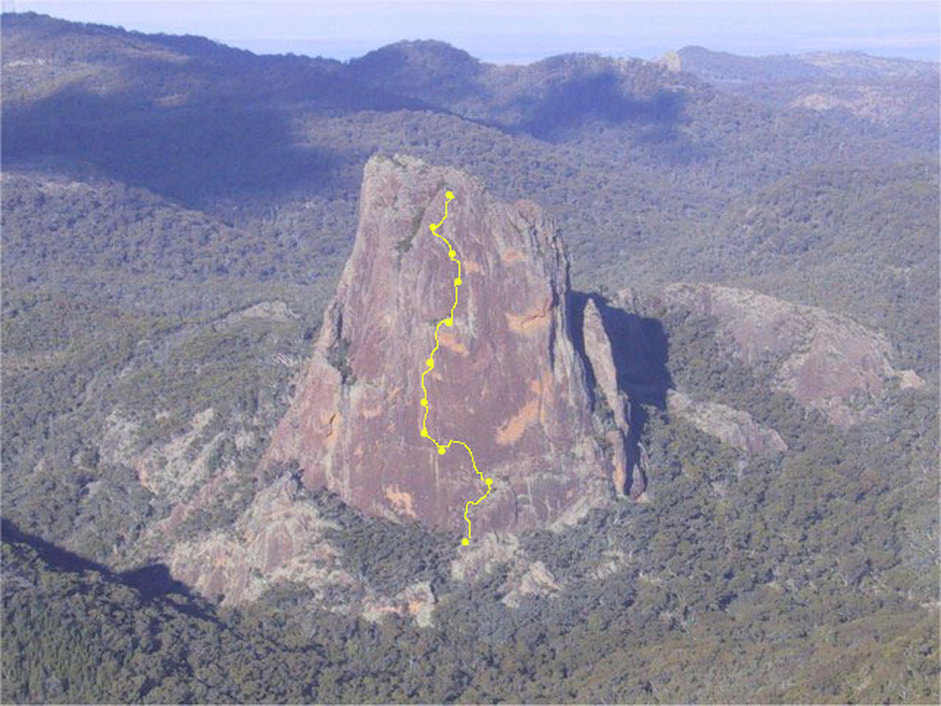 We invite you read Keith Bell's entertaining stories about the legendary climb Lieben:

In 1963 he also found time to assemble and print his seminal guidebook, The Rock Climbs of NSW (New South Wales), not an easy undertaking in a pre-computer environment. This publication provided the foundation for John Ewbank’s 1967 guide, as well as for all Australian guides since. Bryden also invented and perfected the carrot and bracket bolt system used for many years by climbers to provide safe protection, particularly in the Blue Mountains.

But, it was the magnificent triptych that he assembled in the mid 1960’s that proved to be his masterpiece. These were the climbs that Bryden was most proud of, scaling the three highest unclimbed faces to be found Down Under:

The first panel of the composition, Elijah on Bluff Mountain was climbed in May 1964 by a 24-year-old Bryden accompanied by a brash 16-year-old - John Ewbank. Characterised by short pitches and difficult route finding, it was a tour de force. Its fourteen solid pitches never relent making it a serious undertaking even today. Later, they went on to add the equally impressive Stonewall Jackson (20/5.10c) and Ginsberg (19/5.10b) in 1969 on this remarkable trachyte cliff. 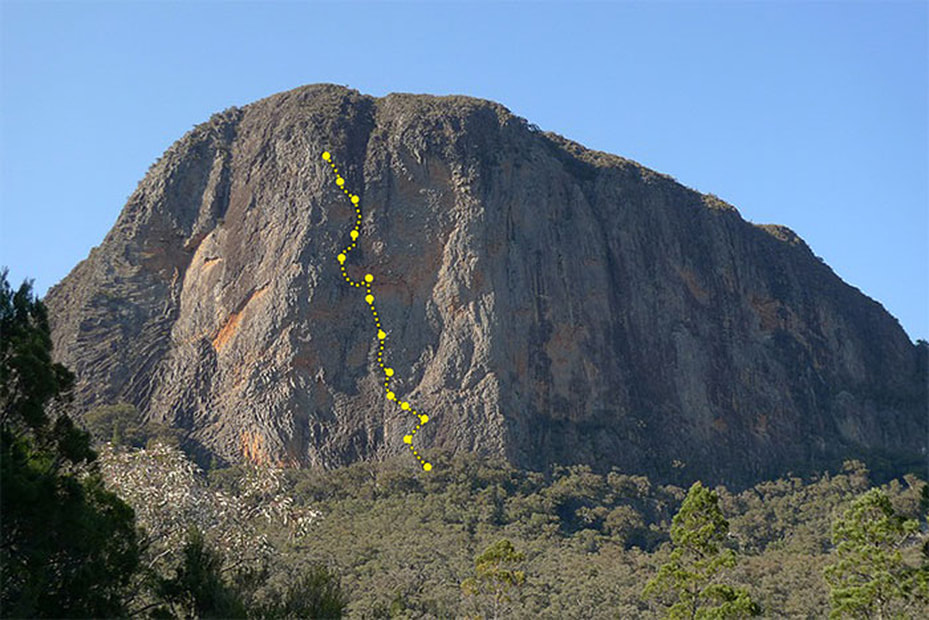 The route Elijah (17/5.9) established by Bryden Allen in 1964 on Bluff Mountain in the Warrumbungle National Park, going up one of the highest unclimbed faces in Australia at that time. (Photo Credit: https://www.brydenallen.com)
​Bryden shared a story about the ascent of Elijah that he often chuckled about. While high on the face of Bluff Mountain, Bryden thought that a bolt or two should be placed to enhance the anchor that John had constructed. John strenuously defended the multi-nut belay he had assembled, so Bryden acquiesced and led off. Some metres above, Bryden had just placed a runner, clipped in, and was starting to traverse away from it when he felt a fearful tug. It transpired that John’s “solid” belay nuts had failed, and he had fallen off the ledge. Bryden always maintained with a big smile that this was a great example of the climbing leader belaying a falling second who should be belaying him.

For many years, this climb had its start defined by a worn-out pair of Bryden’s deteriorating P.A. friction boots hanging by their laces off a small flake. Maybe they were the original pair that he brought from England?

The central panel of the triptych was A Toi la Glorie - Thine be the Glory, (17/5.9) on Frenchmans Cap (Tasmania), this time with Jack Pettigrew on the 7th of January 1965. It was the first route up Frenchman’s imposing East Face; a formidable and committing achievement considering the limited climbing equipment available at the time, its remoteness, and notoriously inclement weather. The climb is now simply known as The Sydney Route. 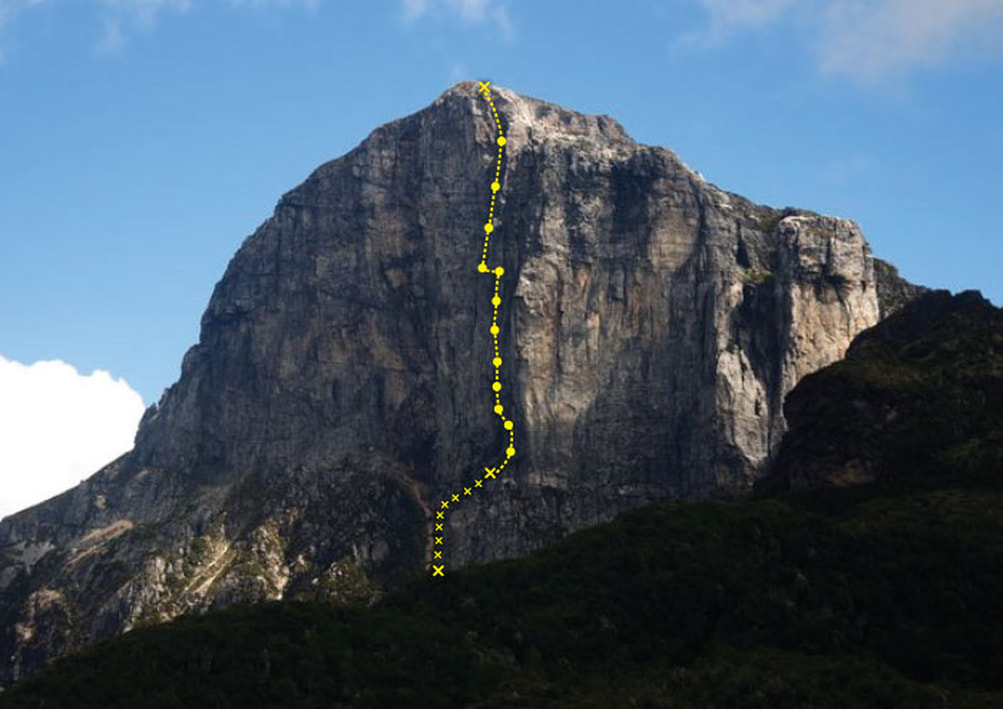 Frenchmans Cap in Central Western Tasmania showing the route A Toi la Glorie - Thine be the Glory (17/5.9), first ascent Bryden Allen and Jack Pettigrew on the 7th of January 1965. (Photo Credit: https://www.brydenallen.com)
​The last panel was completed when Bryden and Dave Witham reached the summit of Balls Pyramid on St. Valentine’s Day in 1965. Along with Bryden and Dave, John Davis and Jack Pettigrew also made the top. Back on Lord Howe Island after the ascent, Bryden was interviewed by the Signal - Lord Howe Island’s newspaper.

​When we established that we could go around Winklesteins Steeple (a face about 1,000 feet above sea level that had been halted previous attempts by another party) there was never any doubt that we would reach the top. The summit is a concave area about 20 feet in diameter. There is some coarse grass in parts, and we found enough stones to build a cairn. Sea birds are all over the Pyramid and we found a baby gannet in the highest point. The breathtaking view was marvellous …”

​The expedition’s route on the SE Ridge faces away from Lord Howe Island with a 300-degree view of a lonely and empty sea. In the mid 1960’s and even into the 1970’s it felt a remote and isolated part of the planet on which to be ‘marooned.'

These three diverse and geographically scattered routes climbed in less than eight months rank, in my opinion, as the most impressive feat in Australian climbing history.

To watch Bryden on rock was to witness the delicacy of a ballet dancer, the precision of a technician and the cunning of a fox. He left me in awe, embodying everything a climber should be.”

​Bryden continued to climb until the end of the twentieth century with hard climbers, weekend climbers and novices. Many people have written about their experiences climbing or indulging in other outdoor activities with him and I am one of their number.

My first trip through the leisurely and picturesque Wollangambe Canyon was with a group led by Bryden. I probably first met Bryden at Lindfield Rocks where many Sydney climbers would congregate for practice late on Wednesday afternoons in the late 1960’s. Bryden was the master of Abseil Wall, an extremely delicate wall with minimal holds that he soloed with apparent ease. Most nights though he was matched by Ray Lassman who was also no slouch on a boulder. Watching their competitive streaks emerge on the Abseil Wall variants was always fun for us in the gallery.

When I and a few others expressed our intention to mount an expedition to Balls Pyramid in 1970, Bryden was the first to step forward with advice and helpful suggestions. While we were going to repeat the SE Ridge, it was Bryden who recommended that we give the other unclimbed ridge a go. Going to the obviously harder, steeper end was a great piece of advice, but also one that induced a few nightmares even before we reached the rock. This got worse as we approached the Pyramid on the boat as the ridge started to loom ominously above us, but our fate was sealed – thanks Bryden.
​A couple years later he offered similar help and advice by suggesting that I should venture onto Bluff Mountain – Gulp!

It was Bryden’s suggestion really that we have a look at Bluff Mountain. One could hardly refuse the invitation after Bryden had sportingly lent us his well-fondled super postage stamp size photo of the mountain with all the exciting routes marked”.

​Nowadays a climber can easily download heaps of information on Bluff Mountain or nearly any crag or climb in the world. It is probably very difficult for young climbers to imagine the primitive state of the art back in the 1960’s and into the 1970’s when traditional climbing and "ground up" first ascents ruled. Certainly, on Bryden’s earliest climbs including the BIG three, there were no harnesses, helmets, sticky rubber, cams, sewn slings or decent nuts or chocks. The pitons available were made from soft steel of European origin and pre-dated the superior American chrome-molly by many years.
Bryden’s first ascents were not just in the Blue Mountains, but some were very close to home located within the soaring skyline of Sydney’s Central Business District. “Buildering” offered big challenges - nocturnal, technical, physical, and legal - that Bryden could not ignore. With consummate skill and guile, he made ascents of the Sydney Town Hall, Central Railway, and the Lands Department Clock Towers, the futuristic Centre-Point Tower, and of course the Sydney Harbour Bridge. 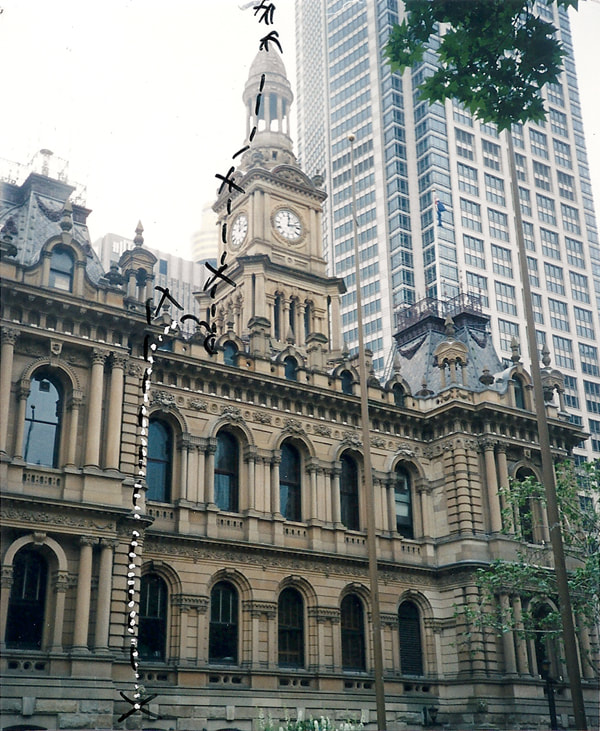 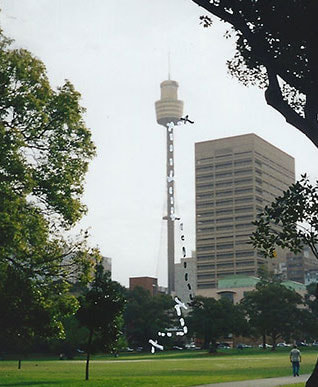 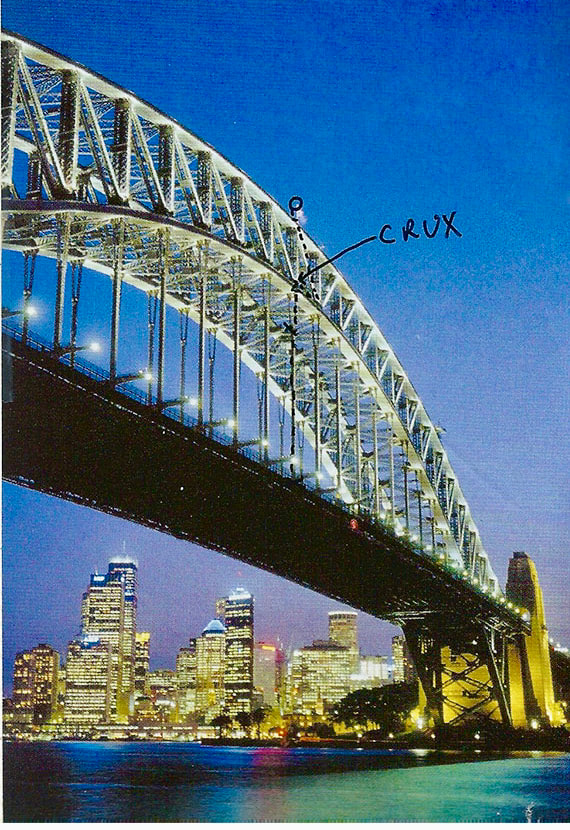 Above photos: Hover over image or click to see captions, click on photos to enlarge. (Photo Credits: https://www.brydenallen.com)
​The period after the year 2000, until his recent death, was undoubtedly his greatest test and his mightiest achievement. It was not on rock but in a wheelchair where Bryden triumphed. Though confined to a wheelchair for the next 22 years Bryden showed a joy de livre sangfroid and independence that was truly inspirational. He continued exercising and kept amazingly fit. He wrote, he busked (solely for the joy of doing it), he attended meetings and book launches, always keeping in contact with friends and family. Like a father figure he remained in touch with the climbing community by visiting the local climbing gym where he kindly belayed me and many others on the walls. On these nights he would wheel around, meeting, talking with, and helping people.

An amazing character with amazing stories. His presence and belays at the gym will be sorely missed”. 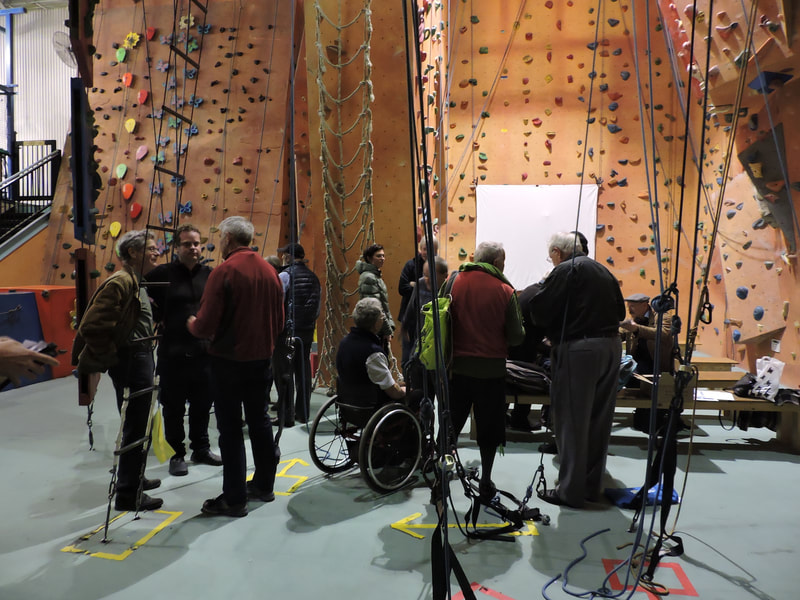 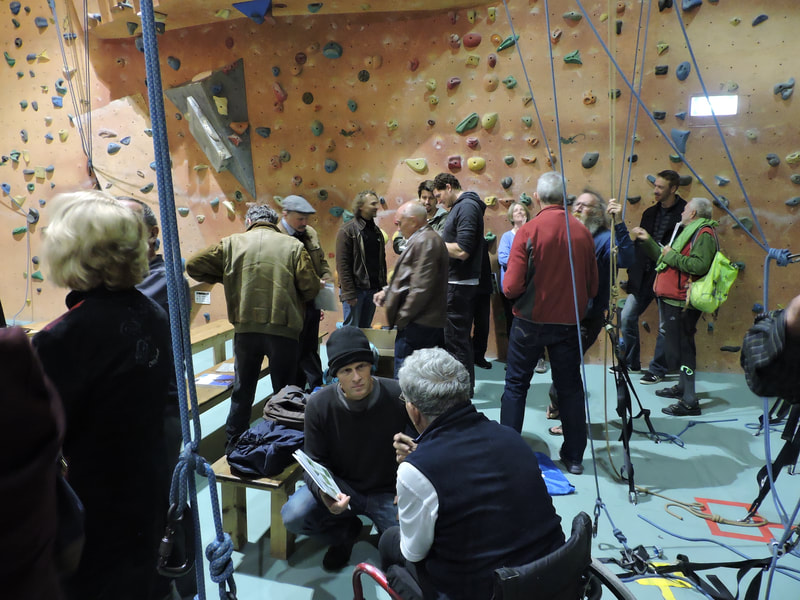 Photos Above (click to enlarge): Bryden at the launch of a book on Balls Pyramid in 2016 at the St Peter’s climbing gym in Sydney. (Photo Credit: Keri Bell)
He also organised a Boulder and BBQ Day at Lindfield Rocks that I attended from Canberra on several occasions.

I saw a lot of Bryden over the last decade and never once did I hear him feel sorry for himself. He was always the old bubbly Bryden, no recriminations, no self-pity, always reliable, the brilliant climber, an innovator, a visionary, and a man with a plan to improve the lot of humanity, who just happened to be seated in a wheelchair. No doubt they broke the mould when they made Bryden.

He touched many people in the climbing world as well as in other spheres. I think the thoughts of his good friend, written below, sum up Bryden - the person - for many of us.

“All my memories of him cause a smile - and somehow, I think that’s a great legacy to leave”. Sue Royce (Atkinson), a good friend from his early days in the Sydney Rockclimbing Club (SRC).

Bryden, ever the thinker and the spiritual man of the outdoors would probably choose this, a passage of his favourite hymn as an epitaph.

“Not for ever in green pastures do we ask our way to be;
But the steep and rugged pathways may we tread rejoicingly”.

My friend, you did that so well and you remain an inspiration to me and to so many others.
Rest in Peace.