​More Than It Hurts: An Interview with Co-Editor Wendy Bruere

Photo: More Than It Hurts co-editor Wendy Bruere
More Than It Hurts...and other stories of (mis)adventure by womxn who climb and mountaineer is a collection of personal stories by women and people of diverse genders who rock-climb and mountaineer. The book was launched in December 2020 by editors Wendy Bruere and Emily Small and grew out of an idea editor Wendy had during COVID-19 restrictions in Sydney, Australia. 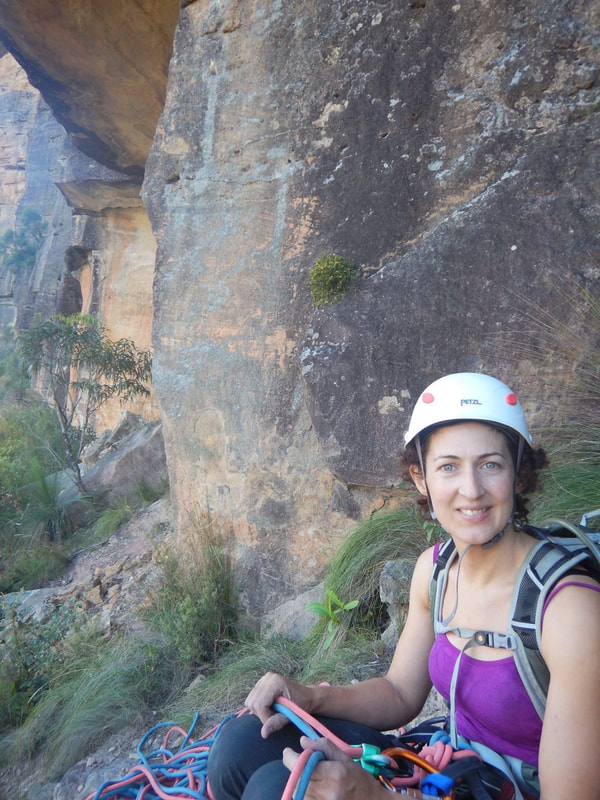 ​The title comes from contributor Caitlin Horan’s story about batting leukemia and self-doubt as she sets out to climb The Nose in Yosemite. Other stories cover ill-advised misadventures, summiting personal goals, dealing with tragedy in the mountains, confronting sexism at altitude, climbing while (heavily) pregnant, and more.

Wendy discussed the idea with Emily, who is also the founder of women’s rock-climbing and alpine group Climb and Wine (a group that organises inclusive events to encourage and support womxn to participate and build skills in climbing), and it grew from there. Initially Wendy envisioned a no-budget e-book, but Emily advocated for print publication. They were able to pull together some sponsorship from Climbing Anchors and Mammut, and secondary sponsorship from Mountain Equipment and the Australian School of Mountaineering and the printed book came to life. Profits from sales are split 50% to Climb and Wine and 50% divided equally amongst contributors.

Common climber interviewed editor Wendy Bruere and here’s what she had to say: 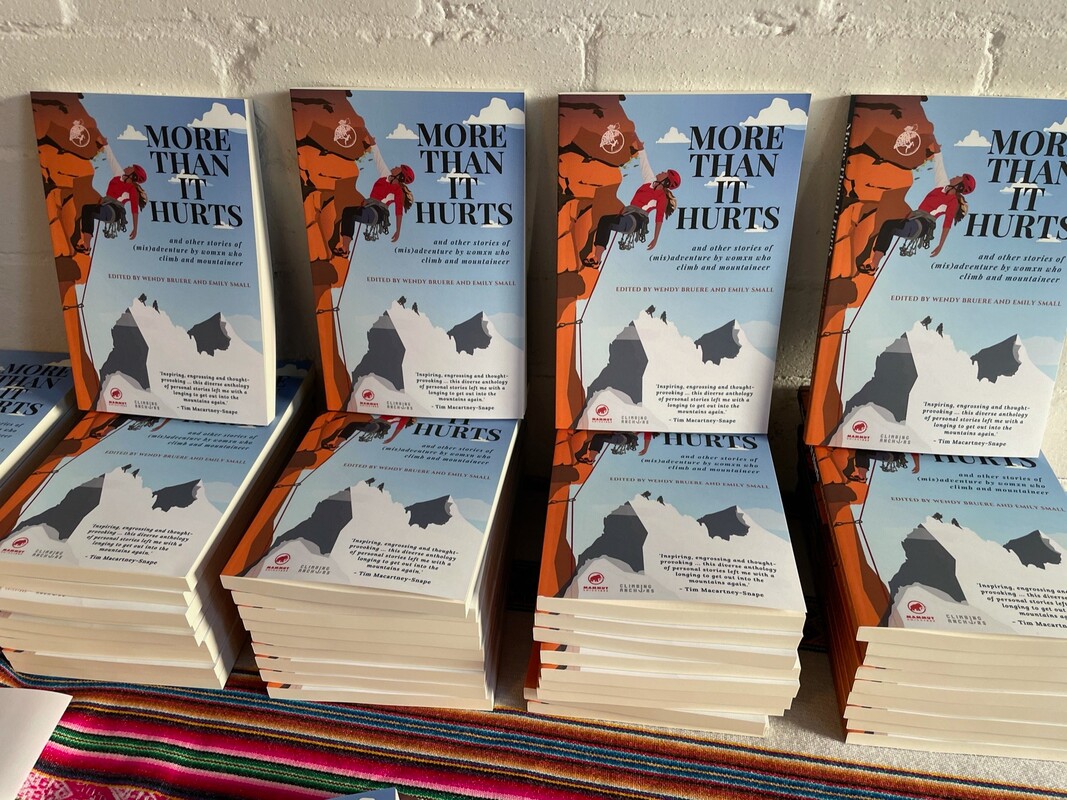 How did you get into climbing?

I began regular rock climbing while I was working in Jordan. Over the years I’d tried it a handful of times at gyms - and loved it - but because I travelled so much for work, there was never a good time to take it up as a serious hobby. At some point I realised if it was ever going to happen, i had to make it happen. So when I got a six month post in Jordan, I decided "now was the time." I knew there was climbing in the country, so I arrived with a plan to meet and befriend the climbers there as soon as I could.
What is your writing and editing background and how did you find the stories you included in the book?

I’ve worked as a journalist and newspaper sub-editor and most of my working life has been in media or communications roles. To find the stories for the book, Emily and I reached out to people we knew - and people they knew - who we thought might have good stories. We posted on the Climb and Wine facebook page, an other rock-climbing and mountaineering Facebook groups. We were also very aware of wanting to have diversity in the book, so I did reach out to a few specific organisations, such as a paraclimbing group.  If we’re doing a book about womxn, because they are under-represented in climbing, then it would somewhat miss the point if all the stories were by white, cis, able-bodied women.
​
With the stories in the book, some of the contributors sent extremely polished pieces to us, others came to us with pieces that told great stories, but needed a bit of editing and discussion before we got to the final version.
What was the experience like for you creating and publishing this book?

There’s so much involved that I had never thought about before. It was an incredible learning experience. Initially we were just focused on the stories, then - as the idea evolved - we realised we needed to organise contracts with authors, cover design, formatting, printing, a launch event, and so much more. We were very lucky that we had so much support from sponsors and others ... we made a few mistakes - and had a few last minute obstacles thrown at us - but it worked out in the end. ​If we do a second book, I’d like to think it would go more smoothly.

​We were also lucky that there were lots of talented people around us to help out - the cover is a collaboration between artist Marie Bracq, who was the first person to sign up for a Climb & Wine event in Australian, climber and photographer Angi Kim, and designer Kavita Joshi.
Do you have a favorite story in the book and why?

I like all the stories for different reasons. I did particularly love Thelma’s piece about being a trailblazing climber in Iran, where women and women’s achievements were treated very differently than men. The way she tells her story is so humble and understated, while she shares these amazing adventures and experiences.
As the editor of the book did you notice a recurring theme in the women’s stories?

A few stories touched on self-doubt, and a couple mentioned people around them doubting their skills and abilities, which in turn can jeopardise confidence. But really, the stories are very diverse and cover a huge range of experiences and adventures. Some were serious, some were funny, some overtly discussed how being female - or non-binary - affected their experiences on rock and in the mountains, others didn’t mention it at all.
How does this book stand out from other climbing story Anthologies, including those that are just focused on women?

Other anthologies I’ve seen focus much more on high profile climbers. This one is mostly "everyday" climbers with amazing, interesting stories [CC EDITOR: We can get behind that! :-)]. We wanted to share a range of relatable experiences.

Seeing this question, I did a quick Google Search to see what the closest books in the market to this one would be, and the one that stood out was Women Who Dare: North America’s Most Inspiring Women Climbers. The description of the book on Amazon starts with, “A celebration of feminine beauty...” This would definitely not be the top thing I’d say about our book!
​
That’s not to criticise what other people have done in this space at all. I suspect though that the fact our book (unlike the one mentioned above) is edited by women may have brought a different perspective and a different way of selecting and framing stories.
What was the mission of the book and do you think it has achieved that?

The mission was to inspire womxn to climb and mountaineer. There seems to be a bit of gap in the women’s adventure market, and I hoped to share stories that would make it easier for womxn to see themselves as adventurers and climbers ... and encourage them in those things.

The fact that this book has been so popular has shown us there really is huge demand for these stories. All the outdoors shops that are stocking it have made second or third orders for the book - and we only released it less than two months ago.

I also hoped that by sharing some of the challenges women faced, the book might make readers more aware the impact of certain things. For example, there were a couple of stories that touched on women’s experiences of not being taken seriously or listened to by male companions, and I think that struck a chord with quite a few people. ​
Where is the future of women’s climbing? Are there particular stories or climbers in the book that show the way?

I like to think one day it will just be"‘climbing," not "women’s climbing," and there will be no need for a book like this.

Hello to scouring the internet for resources on whether and how you can climb when pregnant.

There are an increasing number of inspiring articles online from women giving their personal accounts of climbing whilst pregnant, including the inimitable Beth Rodden.

I learnt that… Yes, you can climb… Yes, you can manage the risks and avoid impact… No, now is not the best time to push forward with leading (duh)... Yes, weird things will happen to your body like loose joints, splitting of abdominal muscles, swollen feet and ankles...No, no-one can tell you exactly what it will be like.”

-- Excerpt From: BIG BUMP CLIMBING by Selene Gittings “More Than It Hurts: …and other stories of (mis)adventure by womxn who climb and mountaineer.” Apple Books.

My route started off relatively easily, and I managed to get through the bridging and out onto the face, which I had reached before. Except now the ‘Fear of The Clean Ascent', the ‘Fear of Actually Lead Climbing’, and the ‘Tribulations of Climbing Something I Hadn’t Properly Cleaned or Climbed’ all combined together at once. I clung to one lonely hold, out on the face, stranded between bolts that I now realised were actually a tad spaced out.

My soft whimpering became louder, until I realised that it was actually the sound of my belayer complaining that I had failed to do anything for the past thirty minutes or so. I was forced, thusly, to explain my predicament to my belayer, who thankfully became invested in my successful ascent, and started yelling encouragement.”

Excerpt From: MORE TACTIC, LESS LACTIC by Vanessa Peterson in “More Than It Hurts: …and other stories of (mis)adventure by womxn who climb and mountaineer.” Apple Books.

Story Examples:
Fourteen climbers and mountaineers tell their insightful, hilarious and adrenaline-filled stories of adventure and misadventure in Australia and beyond.This collection of personal stories is produced by the non-profit rock-climbing group, Climb & Wine, to

Amazon Kindle/E-Book: More Than It Hurts