​
China:
From Yangshuo, to Getu, to Liming

By Emilie Pellerin (Arc'teryx Athlete)
Photo Credit: Emilie Pellerin Collection
The idea of Climbing in China came to my mind a long time ago. About 7 years back it was played on a ‘Rock-Paper-Scissors’ game whether it would be Asia or Turkey.

In the meantime, I got to climb and travel in quite a few other areas including Jordan, Lebanon, Tassie and Aussie, Europe, UK, a tiny tiny bit of India and god bless America. I made friends, a new partner, lost my mind and became a wannabe World Cup climber, then got back outside shortly after. But this isn’t what this story will be about. It’s about a perfectly structured chaos that is China.

Something shocking for westerners is that upon arrival you see pedestrians, scooters, motorcycles, bicycles, cars and trucks all dancing and playing a game of the perfect momentum. It feels like there are no regulations, and yet, first thing you know, you’ll need your passport/visa number to hop on a bus, pass security to catch a train, and your fingerprints and photo will be taken every time you fly. 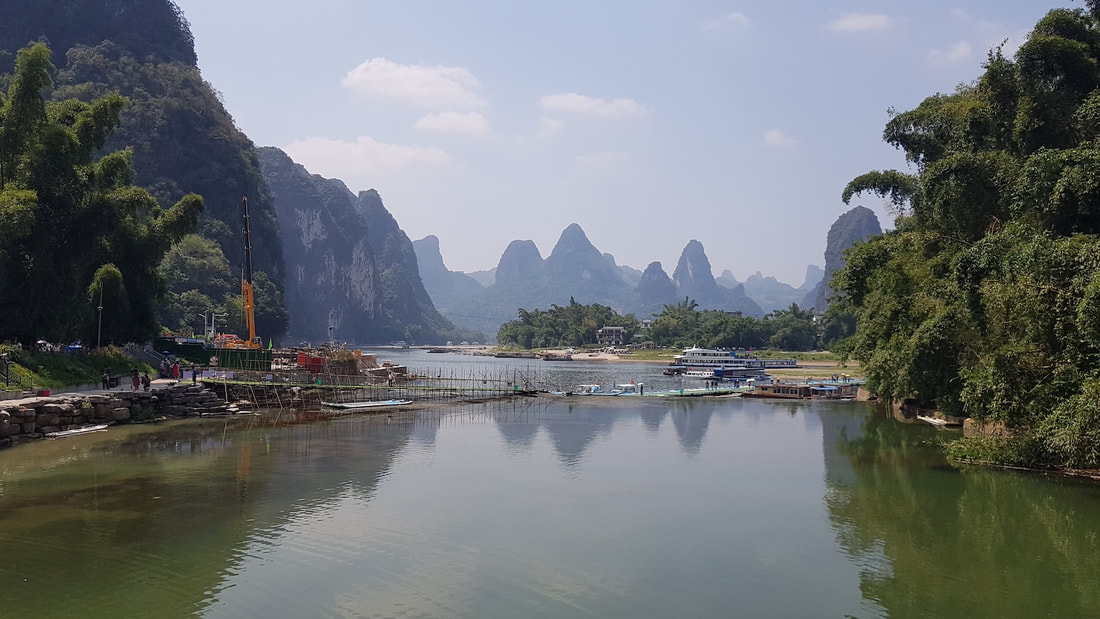 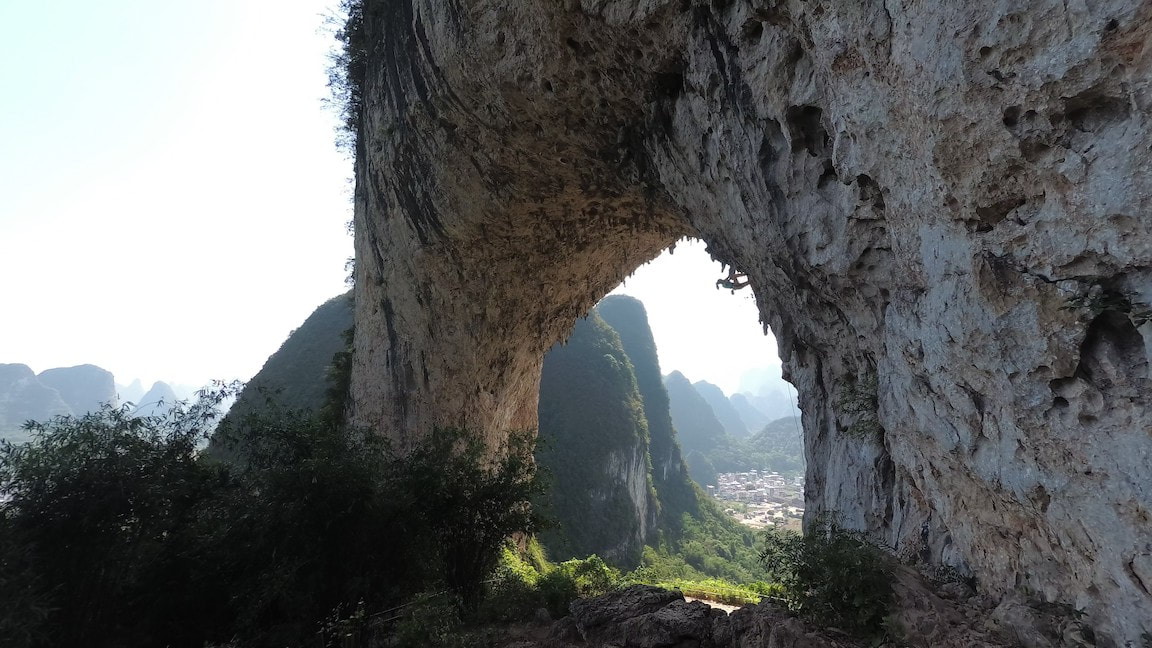 Climbing in Yangshuo, China. Photo Credit: Emilie Pellerin Collection
The Chinese, of course, seemed to deal with the heat like champs.

​In the market, this old lady lazily fanned the thousand flies swarming her chicken breasts. A part of me wondered if the flies were extra protein. She left me thinking twice before I eating a meal that wasn’t vegan.

The market street was wet and you’re lucky if you can avoid stepping in something gewwy, sticky or smelly. Walk through the market and you’ll find all sorts of smells, from flowers and fruits, to live fish, to unknown spices and spoiled meat. You’ll find good stuff that smells awful, horrible-tasting food that looks amazing. I especially loved their soups.

Despite the fact that we were paying about twice as much as Chinese tourists and quadruple what locals pay, it is still cheap. And, despite the smells and flies and food unknowns, it’s kind of lovely.
​After a week and maybe 30-liters of sweat later, we moved to Getu in the hopes that we would get better temps and that we might be able to climb on the famous Great Arch. Getting there was a full day of transit: minibus to fast trains, then a slow train and a walk around to find a citybus to a regular size bus to end up with a short taxi ride. Two men on their motorcycles almost managed to convince us that we could fit on their bikes with our 80L bags + backpacks held in hands.

While passing through the 3rd train’s security check, they found an Opinel pocket knife in my backpack. Next thing you know, four guards were making signs, knife in hands. Turns out it’s too dangerous to carry a knife with you in the wagon -- unless you’re in a hurry and you’re about to miss your train - which we were. They placed a small sticker on the knife to keep the blade closed and off you go.

It was getting late when the taxi driver let us out at the Getu the park entrance.

​Communication got difficult when Google translate let us down. Happily, the first lady we bumped into made eating signs of chopstick to her mouth, both hungry after a long day of travel, we accepted the offer. We ate rice with cabbage, eggplants and tofu, yummy. Turns out it was the ‘restaurant’ with accommodations that people were talking about in their blogs.
​I’m pretty sure every meal we’ve had has been grown within 10 km of consumption. Quite sustainable, right? Ten tiny convenience stores all contain the same thirty products.

A little advise to coffee addicts: plan ahead if you need hot tasty stimulants to feel normal in the morning!

We tried to enter the park to climb in the Great Arch. We suspected it might be closed to climbing, but other climbers managed to go up there not too long ago, so figured we’d give it a shot. At the park entrance, our 55-liter climbing backpacks gave them a good clue about the purpose of our visit. They found the only guy within 20km who spoke English to tell us that rock climbing was not allowed in the park, unless you are accompanied by someone from the Getu Climbing Association. Apparently, the Chinese government is very concerned about white people’s safety in China, and this is the reason why it is forbidden to climb alone.

That day, we decided to go check out Bayan’s Cave instead. We didn’t get the approach onsight - far from it. We bushwhacked for a while, got to the wrong rock face, gathered a few spikes, tons of sticky weeds, and I got stung by the biggest wasp I’ve ever seen. Man that was painful!

Then we found the path.

In the meantime, we met the wonderful guy in charge of the Getu Climbing Association - who was more than willing to help us gain access to climbing in the park! (He is fighting hard to gain back the open-access and I wish him the best of luck.) We purchased an expensive daypass, which includes a motorboat ride and plenty of tourist activities to keep even the pickiest tourist entertained for a full day, but we went to climb. The arch is huge, it’s impressive and climbing a big multipitch was very tempting, but we needed to be able to catch the return boat. So, instead, we had a wonderful time climbing single pitches.

Ultimately we spent a week in Getu and a route I saw at Bayan’s Cave remained stuck in my mind - Treblinka pour Diego (8b) - I’d literally dream about it - and I had to climb it on our last day there.
​On my first go, it felt impossible, I went bolt to bolt. I got all the moves but didn’t believe that I would be strong enough to link them. It’s hard to climb a route that hasn’t seen an ascent in years. You must find the holds, brush them, find your own sequence, it’s a huge challenge just to get to the anchor. I kept making excuses for my failure: If only if I hadn’t been 3rd day on; if that foot hadn’t slipped; if the draws were hung it’d go.

But still, I knew I could do it.

So, 4pm on our last day, Julien encouraged me to go give it one last try before we left and I sent it!

3AM (we should never see that time in the morning) a taxi drove us towards Guiyang airport for our 8AM flight to Lijiang. Upon arrival in Lijiang, we discovered a fancy cup of coffee cost $7, so we hopped on a bus to downtown where had breakfast noodles and rice porridge for $2 and a cold Nescafe can for $4.

It was easy to find the spot where the minivans leave for Liming. The drivers came to us saying ‘Liming, Liming’ - maybe our backpacks betrayed us.

Three hours later, we were in Liming. Wow! We were surrounded by mind-blowing beautiful orange, blueish and white buttresses. Liming is a lovely little village; it breathes well and has life -- a lady swept the floor in front of her store, others washed restaurant dishes, two men sat smoking a bong cigarette, a shepherd traversed with his goats, dogs and chickens and children ran around in different directions.

People tried to figure out what we were looking for in this incomprehensible language. Turns out everywhere we’ve been so far were part of Chinese minority groups where they speak their own dialects - not that we would understand Mandarin anyways.
​We discovered such a nice little community of climbers in town. People from all over the world were here to spend memorable moments on the rocks. Over just a few weeks there were between 20 and 30 climbers in town. It’s a perfect number; if you want a social day at the crag, tell people where you’re going, if you feel like being alone, there’s plenty of room for that. 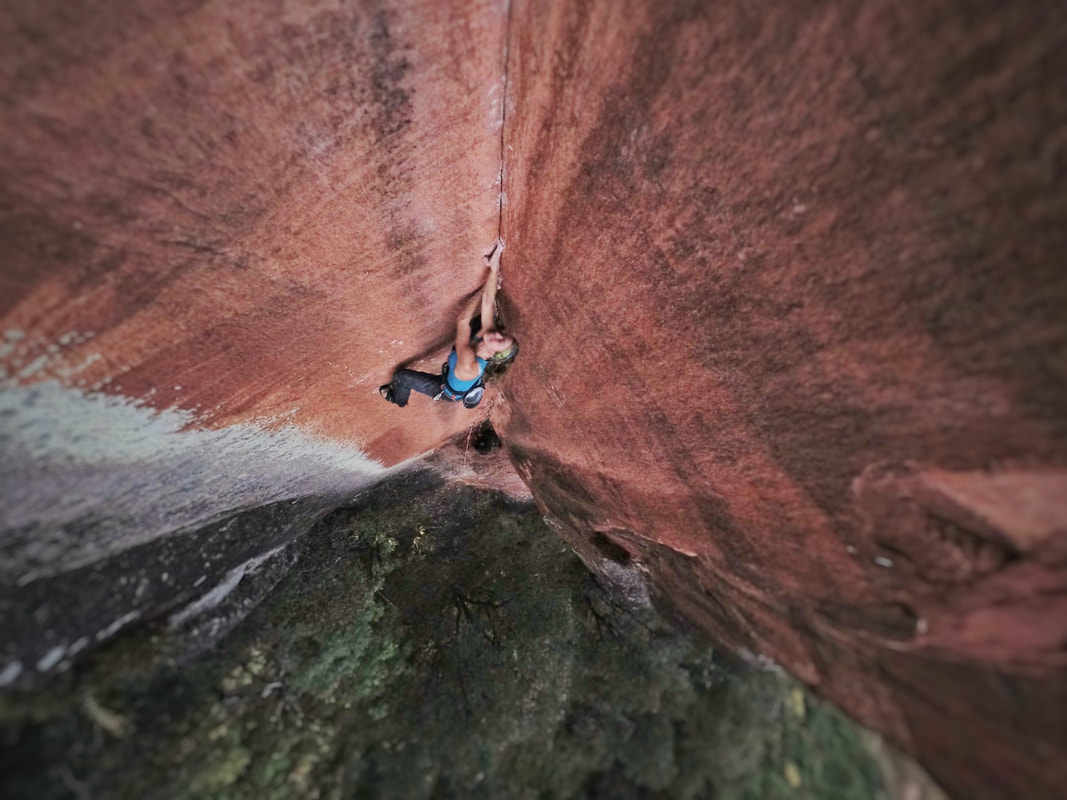 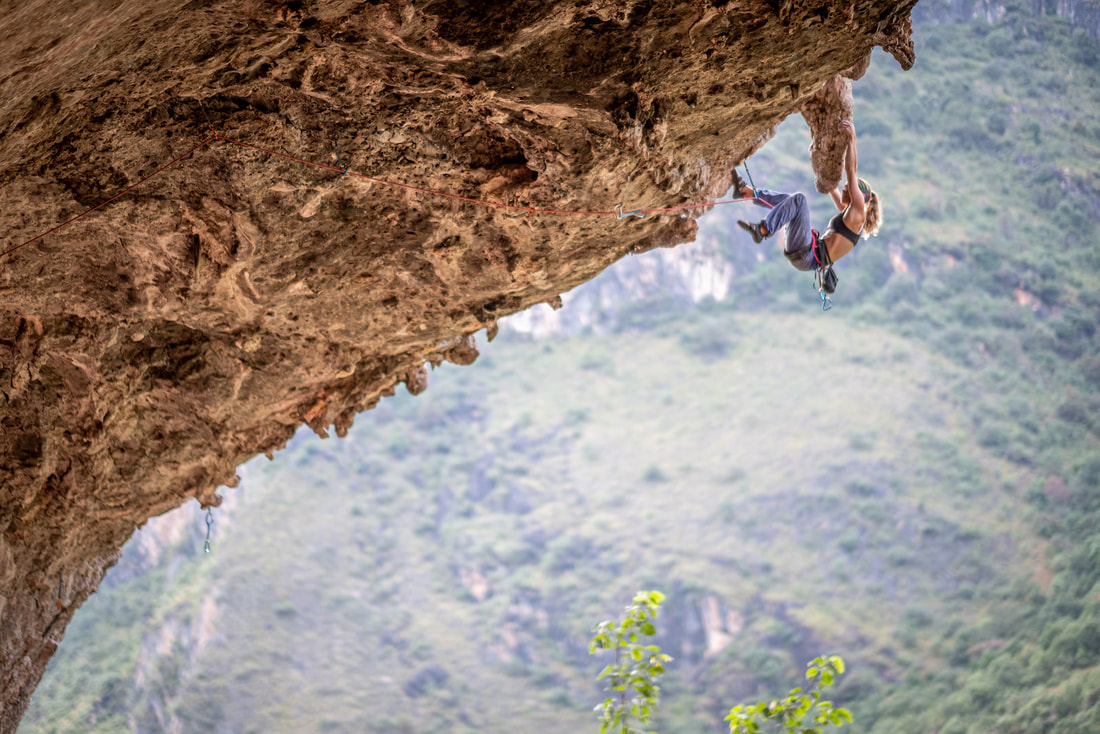 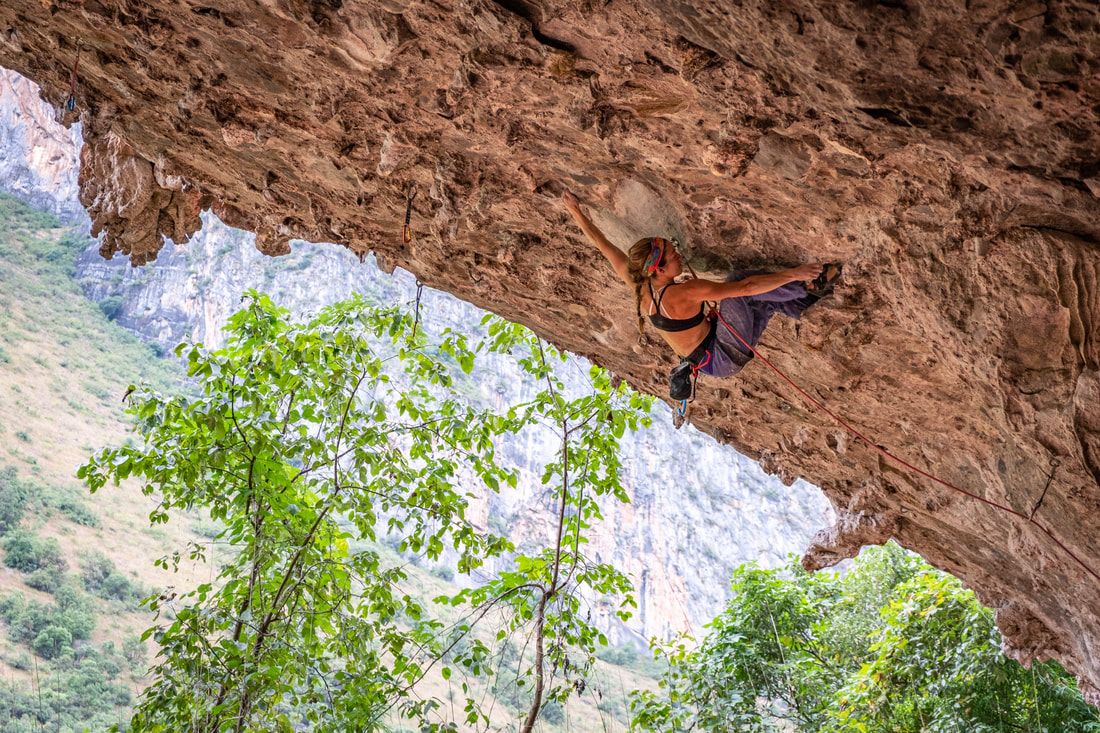 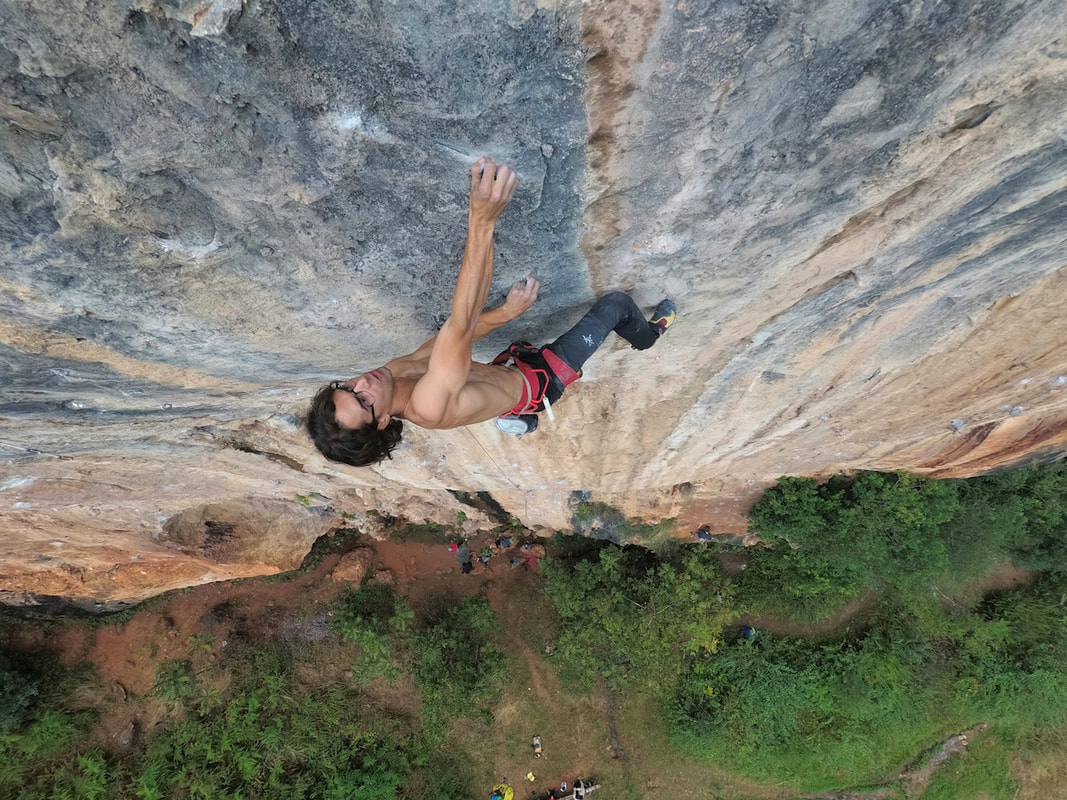 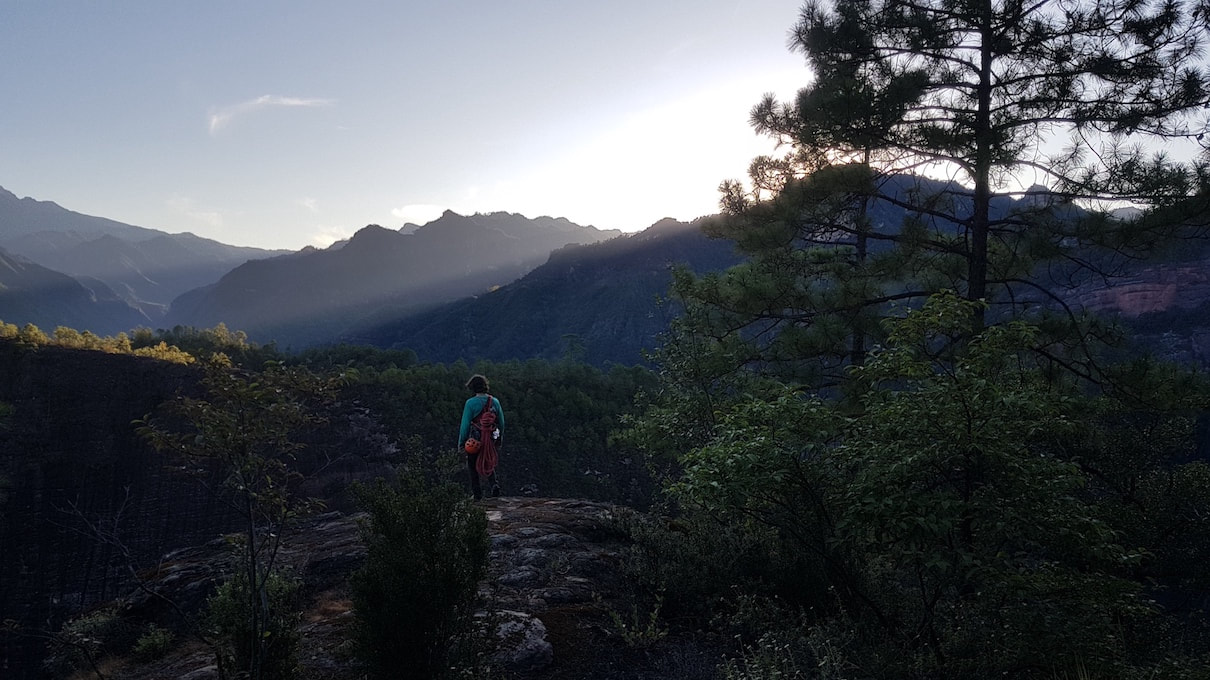