Christo Vladimirov Javacheff, better known as Christo was an ‘avant-garde’ artist who had a predilection for wrapping things. Together with his wife, Jeanne-Claude they wrapped many iconic landmarks, the latest being the Arc de Triomphe in Paris. This they wrapped in 25,000 square metres of recyclable polypropylene silvery blue fabric anchored by 3,000 metres of red rope making it the greatest work of public art worldwide in 2021. L’arc de triomphe, wrapped will be on display for 16 days from September 18 until October 3rd, 2021. Sadly, Christo passed away on Sunday May 31st at age 84, only months before seeing his long-held ambition of wrapping this tomb come to fruition.

Though Christo and Jeanne-Claude wrapped Berlin’s Reichstag in 1995, neither the L'arc nor the Reichstag qualify as the largest example of public art ever. Back in 1969 Christo, through the auspices of the John Kaldor Public Art Projects, received permission to begin work on what would become his greatest and perhaps largest ever work of public art - wrapping a bay. 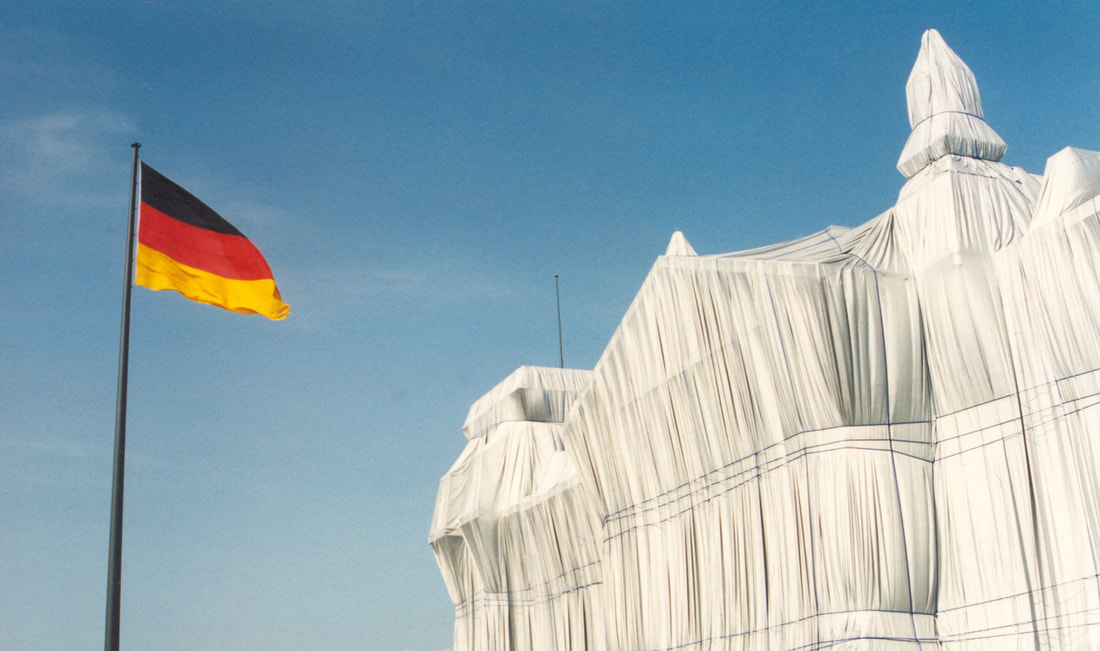 The Reichstag in Berlin, Germany wrapped by Christo with the help of climbers in 1995. (Photo Credit: Oscar Wagenamns wikimedia)
Most workers, including the climbers, were paid a significant amount for the time. Indeed, many climbers used their windfall to finance a trip to the Southern Alps of New Zealand just a few months later. I was paid sick leave by my employer, as well as receiving the pay from hanging around with Christo; this enabled me to stash money away for an expedition to Balls Pyramid as well as finance a trip to Europe midway through 1970. But Christo made a further important contribution that will be detailed in the article that follows next month in the November/December 2021 edition of Common Climber.

It should also be noted that while "Wrapped Coast" employed climbers, the wrapping of the Reichstag, the Arc de Triomphe and probably several other of Christo’s projects also required the professional vertical expertise that could only be offered by the climbing fraternity.
The last image on the video showing two climbers standing at the cliff's edge with arms folded are Hughie on the right and Keith Bell, the author, on the left.

I suppose anybody who has climbed for any length of time has some skeletons in the cupboard. By this I mean an incident or decision that took them to the edge in more ways than one. I have a recurring nightmare that dates back to 1969. Ah ’69, just by looking at the numbers you can tell it was a good year: Full employment, mineral booms, free trips to Vietnam for 19-year olds, Simon and Garfunkel LP’s, and the rock opera Hair was soon to open in Sydney. Hirsute hairstyles were in vogue and while barbers struggled to make a living, the year was especially kind to Sydney climbers.

As 1969 was drawing to a close, the avant-garde artist Christo (born in Bulgaria) arrived in town with his penchant for wrapping things. Now, this man thought big — he wanted to wrap Little Bay if that is not a contradiction in terms. However, Little Bay boasts cliffs almost 30 metres high, definitely not your run-of-the-mill Christmas or birthday present. But I didn't really care, Christo was willing to pay $20 a day to climbers for our services and I was all-in. At this stage many readers are probably thinking ‘ripped off’, but the average weekly wage was about $40 at the time so this little project was a genuine gold mine. 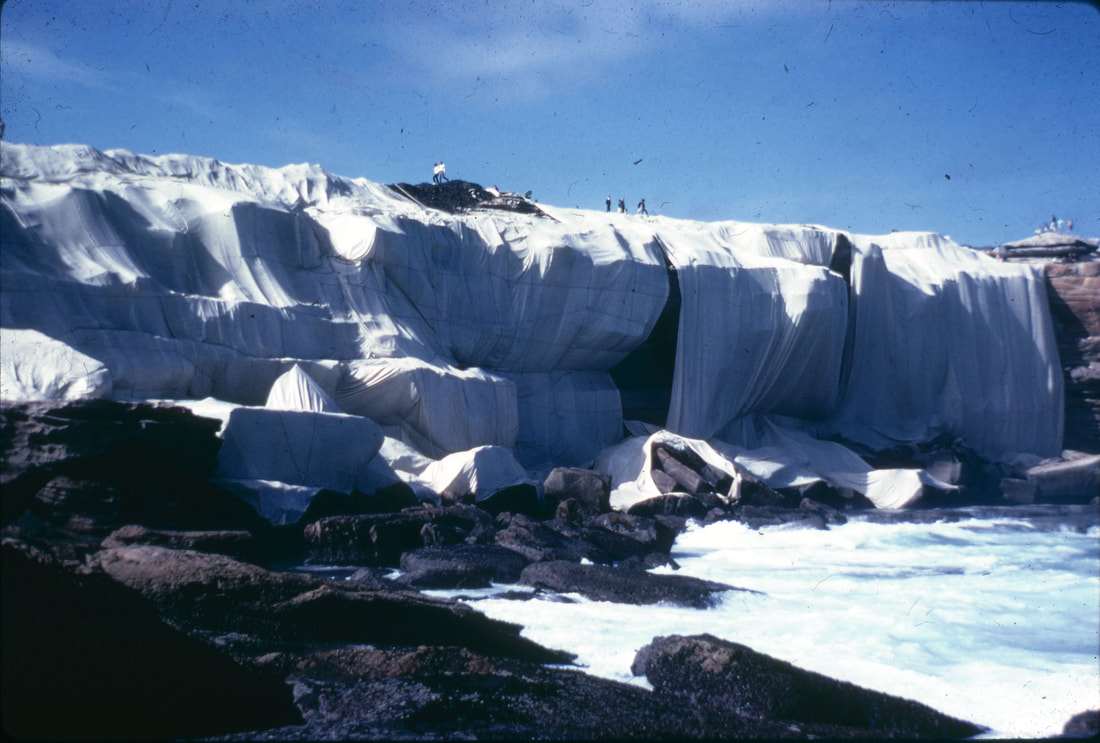 Christo's "Wrapped Coast" at Little Bay, Sydney, Australia, 1969 (Photo Credit: Ellen Waugh)
There are not too many climbers with a 400-metre coil of rope tucked away in the cupboard, but the following might prove instructive on what not to do if you want to cut it into smaller, more manageable lengths. It could also illustrate that simple and seemingly elegant decisions in the climbing world can lead to trouble.

After a night of deliberation in the heady atmosphere of Gearins Hotel at Katoomba, we came up with the following solution: we were going to make use of geography and gravity to overcome the "gordian knot." What we decided to do was to take the remaining coils to the nearby Echo Point Lookout and toss them over the 200+ metre drop. Our plan should have been a bit more complex than that, but in our befuddled, inebriated state we had not worked out all of the details. 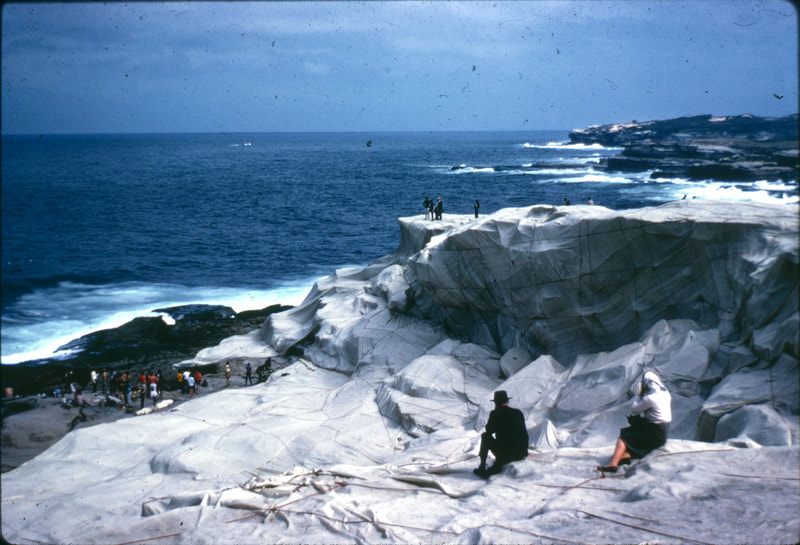 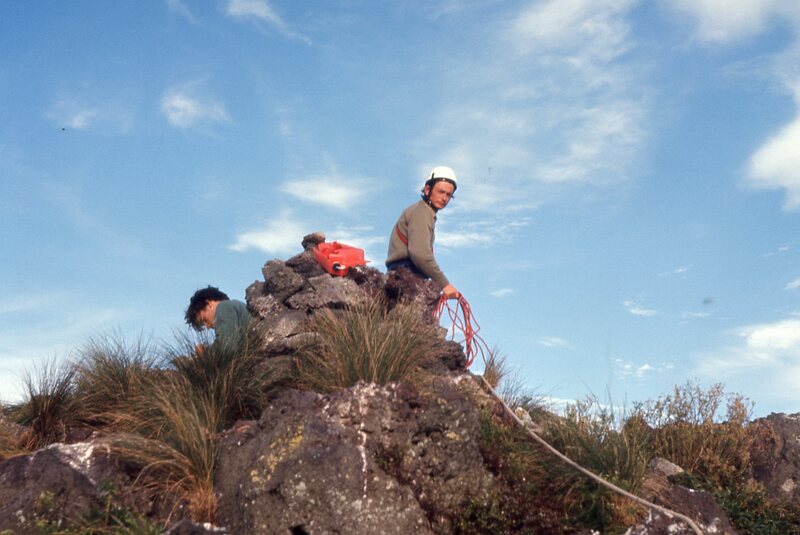 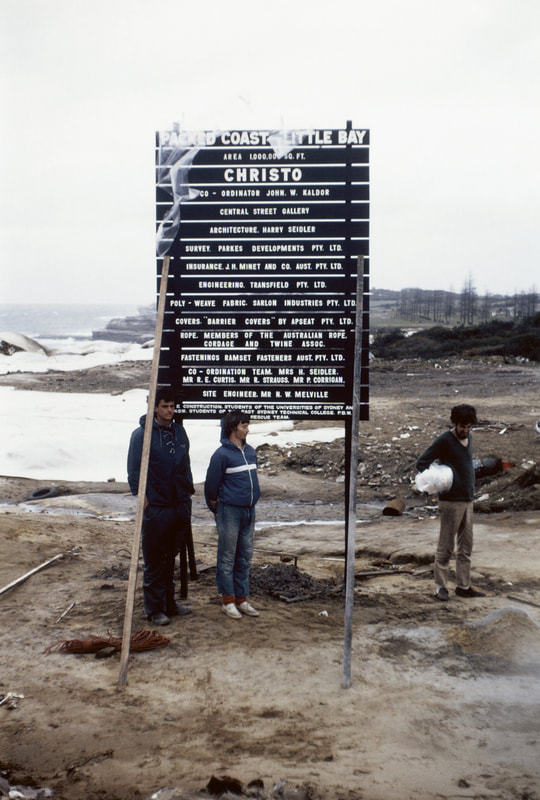 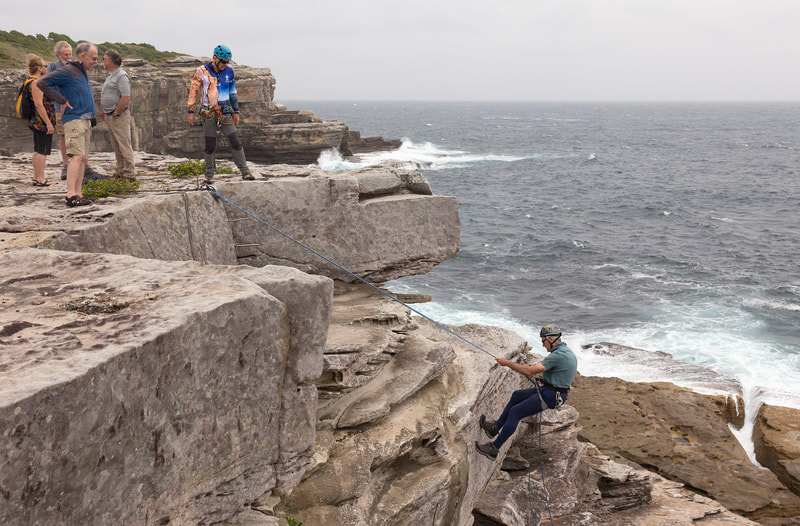 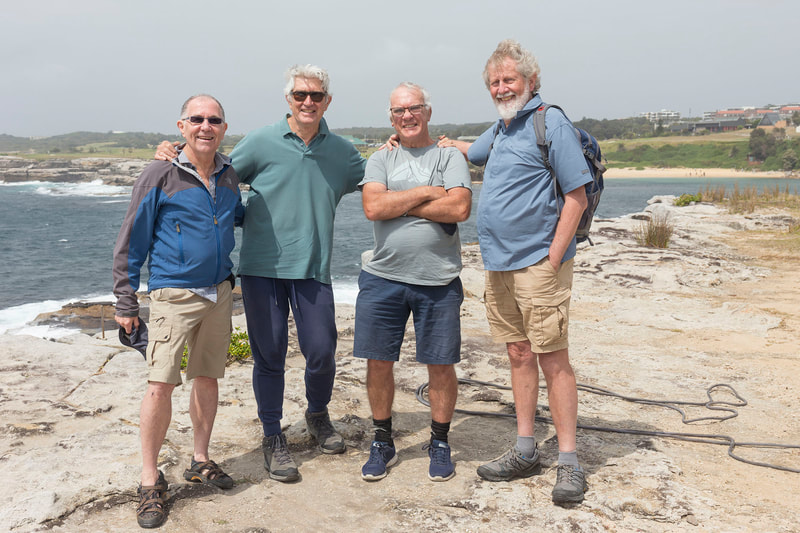 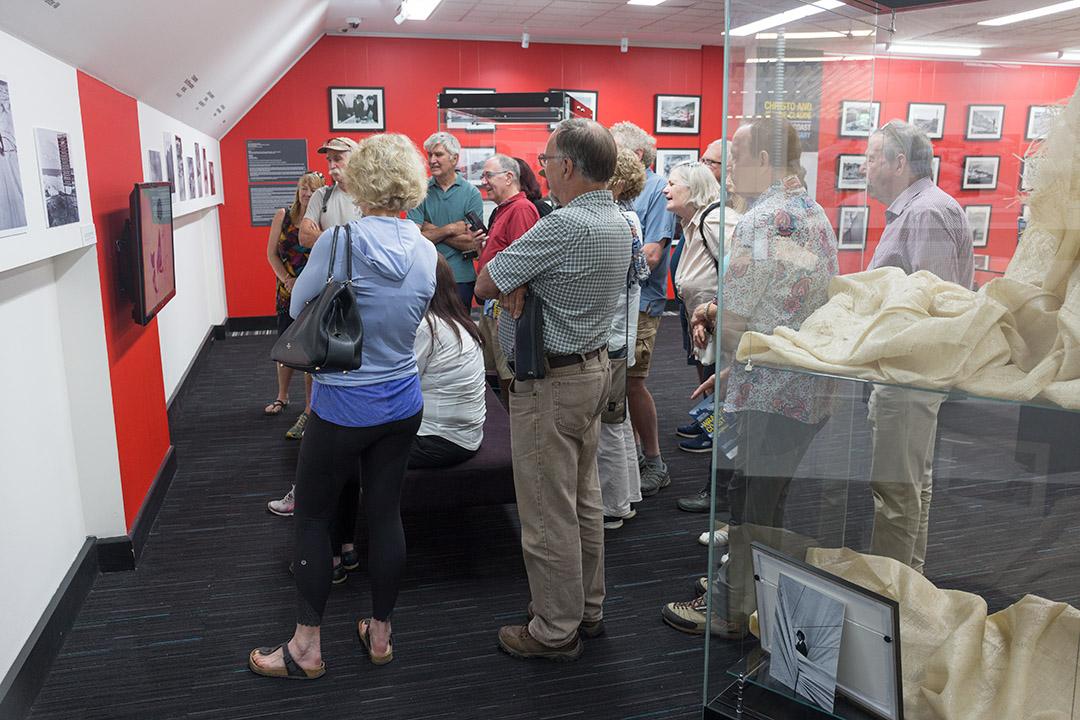 Click on above photos to enlarge ad see captions. (Photos courtesy of Michael Waite of the Kaldor Public Art Projects)

The Christo rope was used extensively by the 1970 Balls Pyramid expedition (see the stories Animal Acts Part 1: Things With Wings and Animal Acts Part 2: Things That Slither Crawl and Walk ) for fixed rope, slings and the float rope used to ferry gear from the boat to the shore.

In 2019 the John Kaldor Public Art Projects celebrated the 50 years of public art (beginning with ‘Little Bay’) that they had supported with exhibitions and a series of public performances at the NSW Art Gallery. A large library near Little Bay also featured an exhibition and photos of Wrapped Coast. Not to be left out, many of the climbers and their friends/partners including a representative from John Kaldor revisited the site and then retreated to a local pub to do what climbers usually do in these circumstances.

Whether positive or negative Christo and Jeanne-Claude’s intention was to provoke a strong response to their work that over the years included natural features such as Little Bay or man-made structures like the Arc de Triomphe and the Reichstag.

By wrapping (or by sometimes adding other elements) they were attempting to deconstruct or reconstruct our perceptions and our feelings. "Wrapped Coast" was variously described as a tsunami, snowfield, iceberg, glacier, waterfall, moon/desert landscape or just sheets of plastic hanging on a cliff. Alternatively, others would just be captivated by the sheer magnitude and scope of the undertaking.

Perhaps though, the last word should be given to Christo.

“I am an artist, and I have courage. Do you know that I don’t have any artworks that exist? They all go away when they’re finished. Only the preparatory drawings, and collages are left, giving my works an almost legendary character. I think it takes much greater courage to create things to be gone than to create things that will remain.”
AUTHOR'S NOTE: My thanks to Michael Waite of the Kaldor Public Art Projects for his assistance and provision of many rare photographs of Christo’s Wrapped Coast. There are some excellent images of the Little Bay Wrapping as well as of climbers working on it.  http://christojeanneclaude.net/projects/wrapped-coast