​Photos & Story By Michael Hjorth
There is a HUGE climbing wall in Copenhagen. It's the tallest in the world in fact - 80 meters (262 feet) - and it was built on the side of the Amager Bakke, the cleanest waste-to-energy incinerator powerplant in the world and a veritable outdoor sports playground (more on that later).

The wall opened in 2020 and, as a member of the climbing club that runs the wall, I have climbed there extensively. I didn’t participate in the construction planning or negotiations with the architect or owners of the incinerator building, but I know the basic story behind the endeavor. ​ 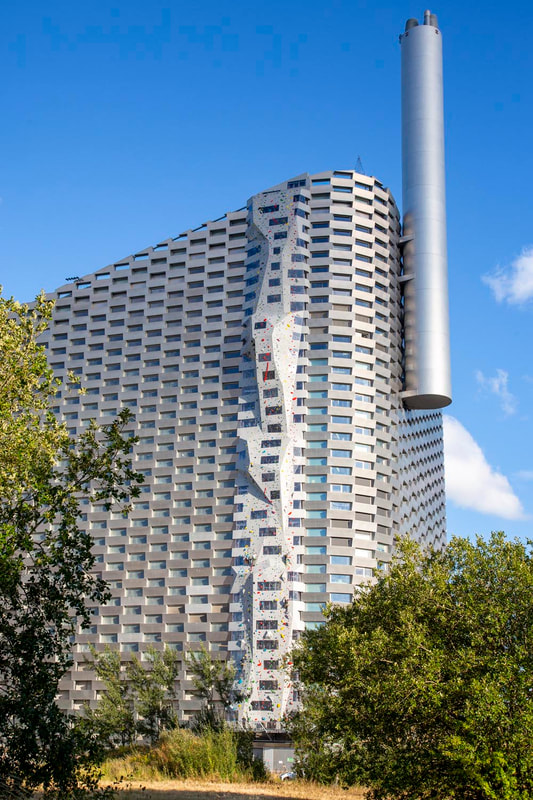 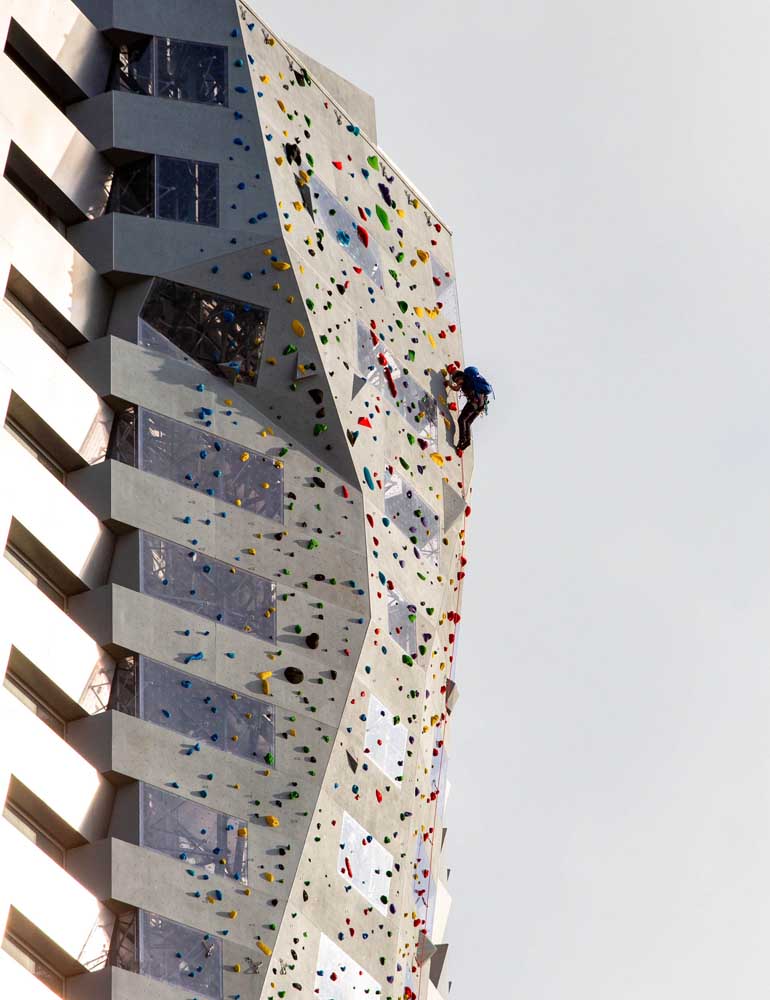 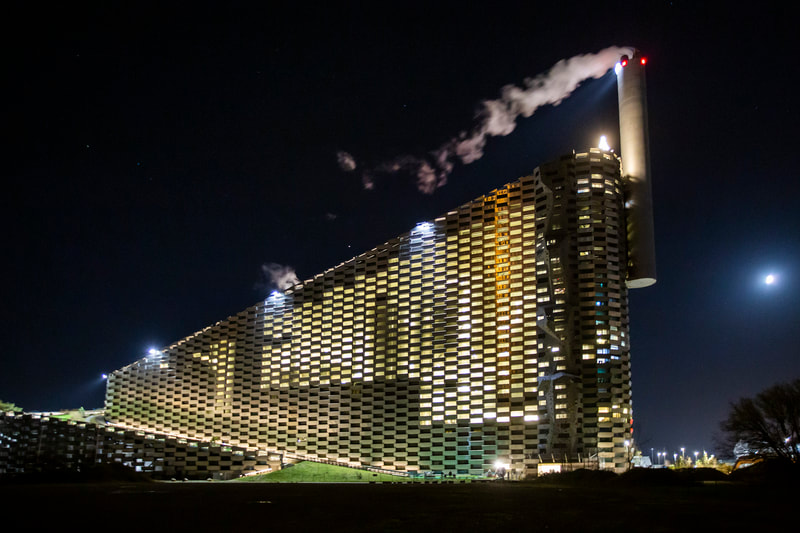 Click on the above photos to enlarge and see captions. 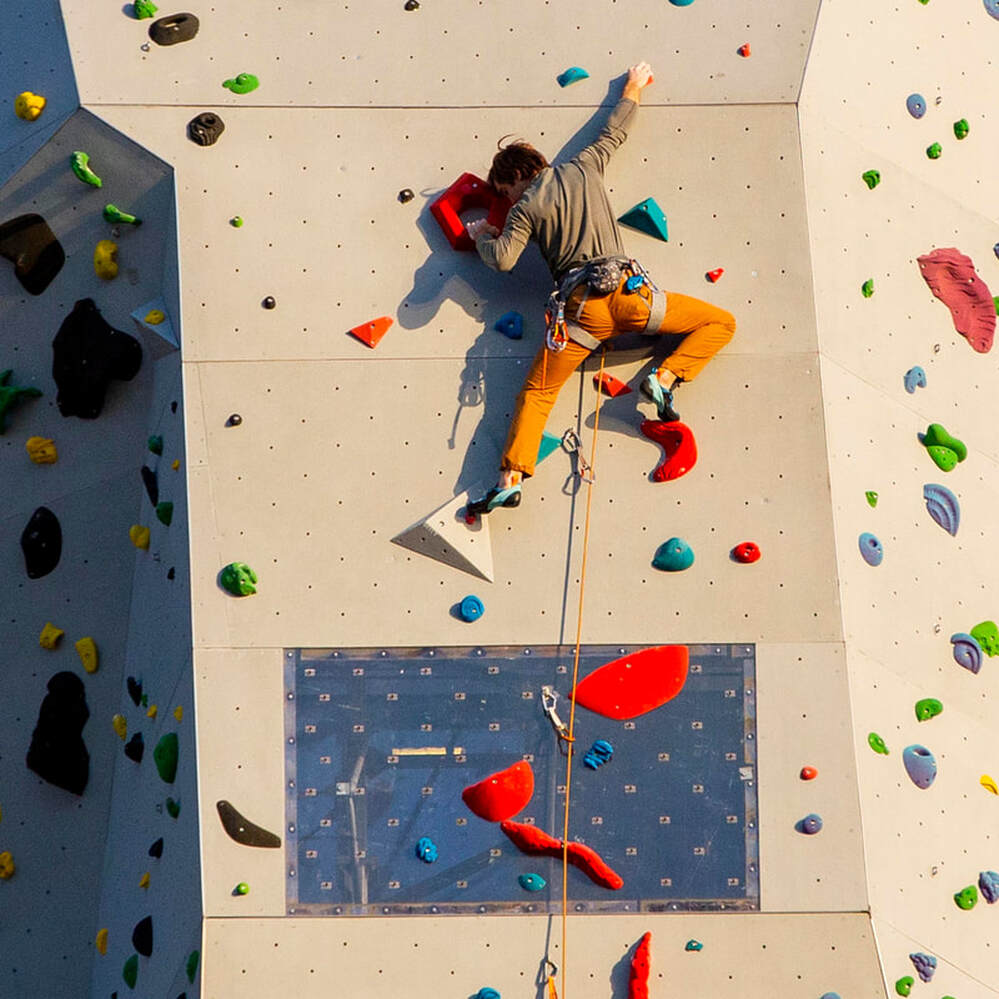 Chris Sharma checking out the Copen Hill Wall.
Twenty-meter (65 feet) single pitch climbing on the lowest section is allowed all day, as the net will catch the falling objects from these lower heights, but, because the entire wall cannot be used at convenient times, the Danish Climbing Club has not been billed for the rent. This means there is no extra cost for club members to use the wall. I find it quite fascinating and wonderful that we have a $1.5 million wall without having to pay a dime - just because a world famous architect wanted to have a climbing wall on his building!

Administration of the wall is very low key, very Danish. Unpaid/volunteer gate keepers run the club's web-based schedule in their free time. Many people wonder if they can visit Copenhagen and climb on the wall, but currently only Danish Climbing Club members who have taken a multipitch course and passed the test are allowed on the wall. This, of course, creates tension from the other smaller climbing clubs in Denmark, as well as from visiting foreign climbers. Club authorities and gate keepers have to deny access to several climbers daily.

The wall was very popular during the COVID lock down, when other climbing halls were closed and access to our primary outdoor rock climbing in Sweden was inaccessible. But now, with rock climbing areas and halls re-opened, only approximately 20-40 climbers visit the Amager Wall per week.

The wall has nice views and great exposure, but the actual routes are NOT good! Spaced out holds gives reachy climbing with very little variation. Grades differ only through the size of the holds and are still reachy. There are seven bolt lines and 10 color-coded routes. Grades are from F5b to F7b (5.8-5.12). All routes have overhanging parts, either gently or through shorter steep parts. The easiest (5.8) route is juggy all the way. Holds could have been a little less spaced out, but it would still demand a certain amount of raw arm power to ascend.  One visitor is quoted as saying, "It’s a nice workout, great to build up stamina, a good place to train fast multi pitch logistic. And heh, a very nice view from the top!"
Because of the specialized nature of the wall, the route setters are in Bulgaria at Walltopia. At some point, though, the Danish Mountain Club will do some route setting, but it will not be easy! First, to make changes to the wall, the ski slope needs to be closed, which is a commercial loss for the skiing company. Second, it will require numerous 80-meter ropes and lots of holds. As club members we have discussed route-setting next summer in the middle of the night, when the daylight is extra-long.

Fortunately, the Danish Climbing Club also has a very nice indoor lead wall just a kilometre away (0.6 miles) from Amager Bakke. It has 50-foot (15m) walls, approximately 100 routes, and very clever route setters. This is where I go on work days. On weekends Danish climbers head over to Sweden for outdoor rock climbing.

But if the weather is nice and it's a long, summer day, it's good to go with friends to Amager Bakke and run speed laps on three to four 80-meter routes. Then on the last lap bring up some beers in a backpack to the top platform and enjoy the sunset! Couldn't be better!

Despite the shortfalls of the Copen Hill wall will, it will have a good effect on Danish climbing on a broad scale. The wall allows Danish climbers to train for strength, endurance, and multi-pitch, so they will be much more confident tackling outdoor multi-pitch alpine routes and Norwegian rock. This has definitely been lacking in the past.

Hopefully too, as cities grow and climate changes, structures like these will be more common. For now, though, we enjoy Copen Hill! 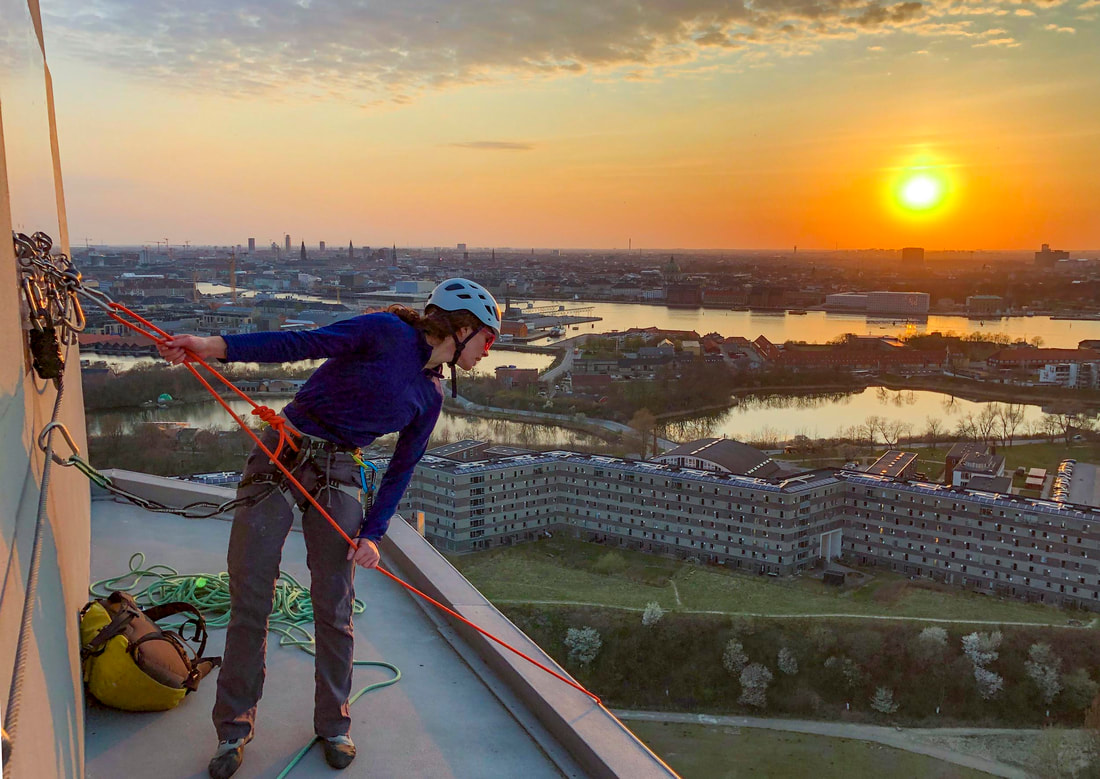 A few laps with good friends and enjoying the views from the top at the end of the day make for a fun outing.