From Yorkshire to Eternity

There are climbs and there are climbs: [This climb] is surely a route that will rise above the pack in years to come. A wonderful combination of excitement and steep clean [crack]." 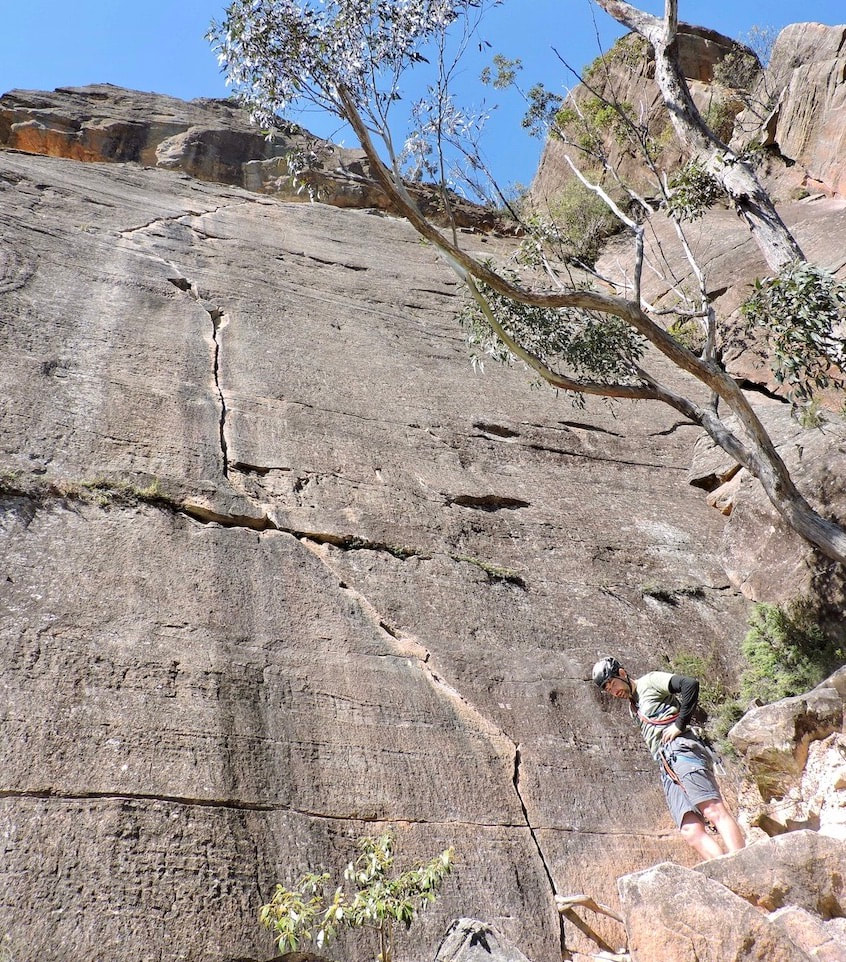 Nathan Mas-Stephens checking out the start of The Eternity. Photo Credit: Keith Bell
A well-trodden and eroded track leads to Eternity. But fortunately, it does not go on forever and you know when you have arrived. The track has been flat for a while, but then suddenly turns right at the end of a buttress before sidling the talus towards a steep, smooth grey wall. Look up, and there it is – an absolute splitter – Eternity, reached at last. Hardly the never-ending journey expected. The route lies close to where the walkdown reaches the base of the cliff. Described in John Ewbank’s 1967 guidebook as:

“One of the most impressive and aesthetic lines on the cliff. Sustained climbing on good rock.”

The cliff is of course “Piddo,” essentially the home of trad in the Blue Mountains, Australia.
Mid way up this section is a tenuous resting ledge and the lone “carrot” could be clipped (A “carrot” is uniquely Aussie invention where a filed down tapered bolt is hammered into a drilled hole in the wall. The climber slides a keyhole hanger over the bolt, which is then secured by clipping a draw to the hanger.) At its zenith, a few moves left on a broken crack leads to steeper ground where the final crack begins its majestic sweep up and right to gain a narrow belay ledge with an overhanging wall above.

I have a vivid memory of the first time I saw Eternity. It was a late Spring afternoon; the crack was lit up like a lightning bolt by the setting sun. I couldn’t hand jam then, but months later I lead it. The tight hand jamming after the left leaning start still gives me goosebumps. As the crack veered right and narrowed, the solid foot jams became smears and the hand jams less secure. After delicate moves and placing a dodgy nut, I pulled onto the ledge and clipped the chains. This was the first splitter in the mountains that I ticked – such a beautiful route."

Exquisite hand jams, locks, and face holds help to transcend gravity as the crack narrows on its upward trajectory. Excellent protection abounds. On my initial ascent, and the one following, at this point I departed from the crack and blasted up the left hand wall. Maybe this had something to do with emulating Ewbank who stated that “the central focus of my fetish was how far back the last runner was,” but perhaps my departure “off-route” and away from the crack was only a sign of the times. With maturity comes wisdom and I have steadfastly followed the crack on any ascent since. 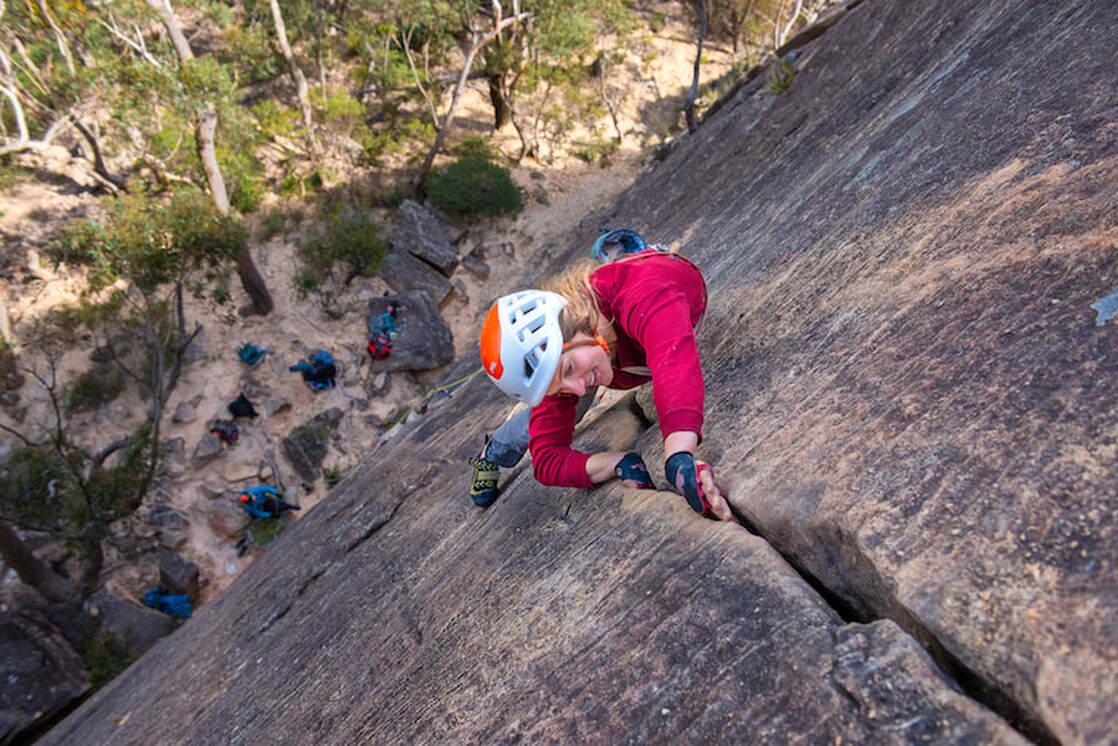 The Eternity is a lightning bolt crack splitting a steep and smooth grey sandstone wall at Piddo. The jamming is delightful with good hands and gear as the ever-thinning crack tapers to a pleasant seam taking wires near the top. It is a must-do Blue Mountains route – enjoy with an appreciation of the crag’s history and quality Trad climbing. Simply superb!"

Some changes have occurred over the passage of time. The dirt and ferns have long since disappeared, as has the bolt, leaving the crack clean and inviting. Protective devices have also improved significantly since the 1960’s/70’s and, as a result, the grade of the first pitch has been downgraded from the original 19 to 18 (5.10b to 5.10a). Ewbank also climbed the bulging wall above the belay a few weeks after Moore’s ascent and renamed Yorkshire Crack, The Eternity.

I climbed this upper pitch a couple of times in 1974/75 but after the first hard moves it becomes a fairly nondescript wall, not doing justice to its lower reaches. Nowadays the top pitch is a largely neglected relic of a bygone era.

When I did Eternity, I was told to save my second #0.75 and #1 for the narrowing crack near the top. So, I saved them, using every single large nut… then suddenly the climb backed off, I was looking at the anchors, cams still on the harness! If I hadn’t had doubles though, I probably would have bailed due to running out of gear. So glad those extras helped me climb such a beautiful and iconic crack."

Also, given the penchant for fellow Aussies to abbreviate just about everything and to reject affectation, the definite article “The” is more often than not disregarded, leaving the singular name Eternity to stand alone. Many other climbs at Piddo such as Spartan, Kraken, Pharaoh, Banshee, and Carthaginian are similarly treated.

An interesting aside is that the word Eternity has a particular resonance in Sydney. An illiterate former soldier, battler, and “Born Again” Christian wrote “Eternity” in beautiful copperplate script with yellow chalk on the pavements of the city between 1932 and 1967 in areas very close to the suburb where Ewbank lived. I can remember seeing his beautiful script many times and it is interesting to speculate whether the graffitist, Arthur Stace, is partly or wholly responsible for the name of this beautiful climb. 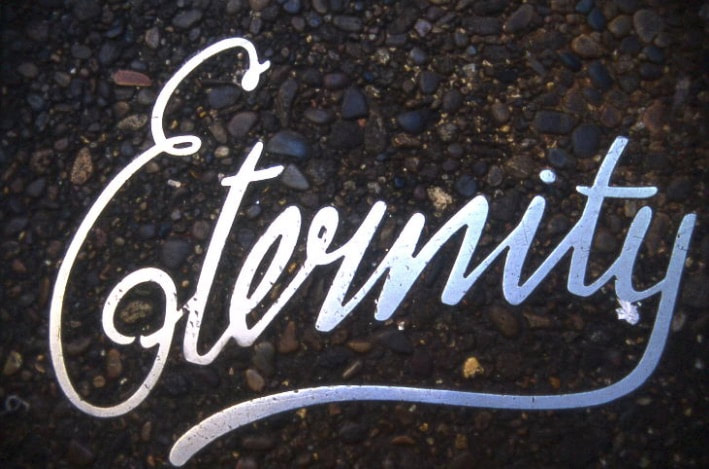 Photo Credit: By Sardaka https://commons.wikimedia.org/w/index.php?curid=3976888
​Eternity, then, is a climb with a chequered beginning but a brilliant history. It has risen to become one of the most sought after climbs on the crag, if not in Australia. Ewbank was at the forefront of its establishment so perhaps the final words should be left to him.

Climbs achieve their own market value within the psyche of each new generation. Personally, I believe that the wheel will turn a full 360-degrees and that the most valued climbs of the future will once more be routes where all that exists is the illusion of the absence of previous human passage."

While some climbs come in and out of fashion or drop forever out of sight, The Eternity, or certainly its first pitch, will always remain high on any climbers hit list. 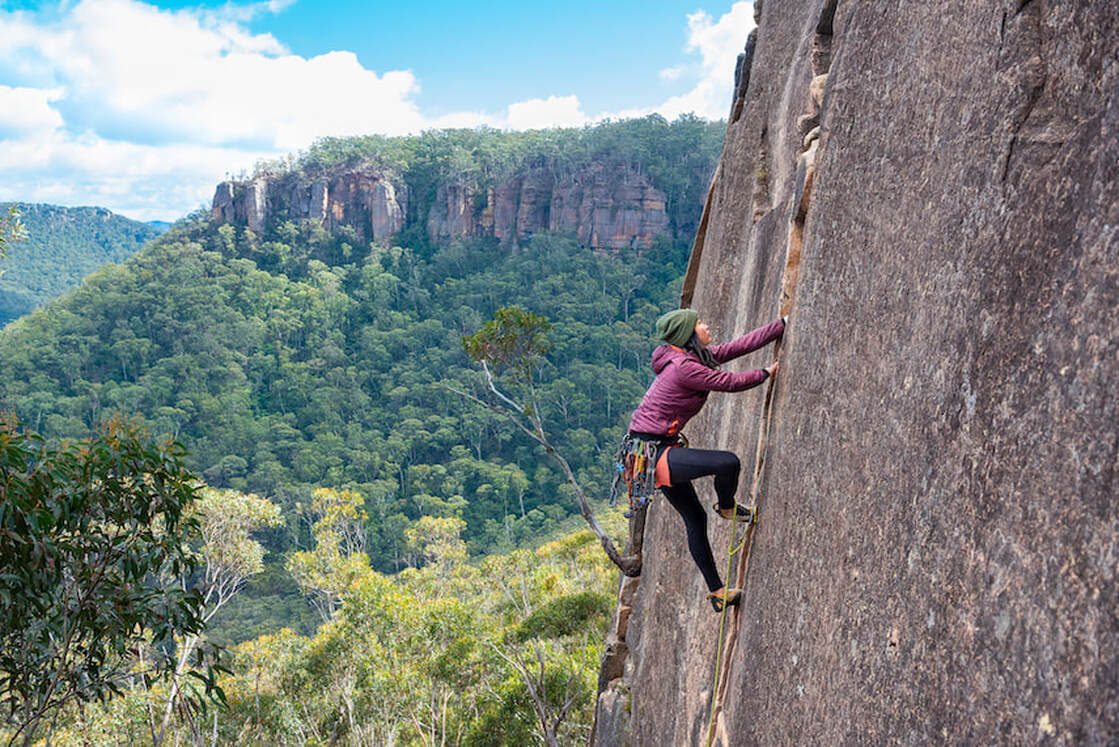