By Enock Glidden
I stopped in Yosemite National Park to speak at Yosemite Facelift this past fall.  While I was there, I met Josie McKee who spoke of her experience watching her partner Quinn Brett fall while speed climbing The Nose on El Capitan.  She also did an in-depth interview about the accident in Outside Magazine.

I have never met Quinn, but I hope to someday.  Since the accident she has become an outspoken advocate for climbing safety, people with spinal cord injuries, and spinal cord injury research.  As a person who was technically born with a spinal cord injury due to Spina Bifida and as a relatively new climber, I was very curious about the difference in perspective from being injured to being born with a disability.

I did an interview with Rand Abbott in the Adaptive Climbing Edition of Common Climber. I asked some questions in that interview that I have also asked of Quinn. I hope we can all learn something from different perspectives.
​
Enock: I know that as a person with a disability who also climbs, it can be annoying or off putting when people cheer for you way over the top.  I ran an adaptive climbing program for a while and some people would act as if they were a cheerleader while people were climbing.

In that sense, what are your thoughts on the way you are treated now versus as an able-bodied climber?  How do you want to be treated?

I think what I hate the most is when people say, "You are so inspirational!!!"  My goodness, I am trying to find a better space within myself when people dole out that compliment.  Because it’s NOT a compliment. The definition of inspirational says it “motivates YOU to do something,” so I started asking people “Why?” when they spat it out at me, or “How am I motivating you?”

I am trying to remember that they mean well, it’s just that when you hear it ten times a day it can be frustrating.  Ha! To be honest I don’t climb much at all, more biking and Nordic skiing. But, it’s a similar context when I am out biking.
​
Enock: I actually had this exact same conversation with my Aunt once.  It really bugged me for a while. I came to my own conclusion that people were just reacting to something they were witnessing, possibly for the first time.  I realized they weren’t trying to be offensive and meant no harm. Now I just say thank you and try to explain my situation to them.  I hope through knowledge I can change that perception. 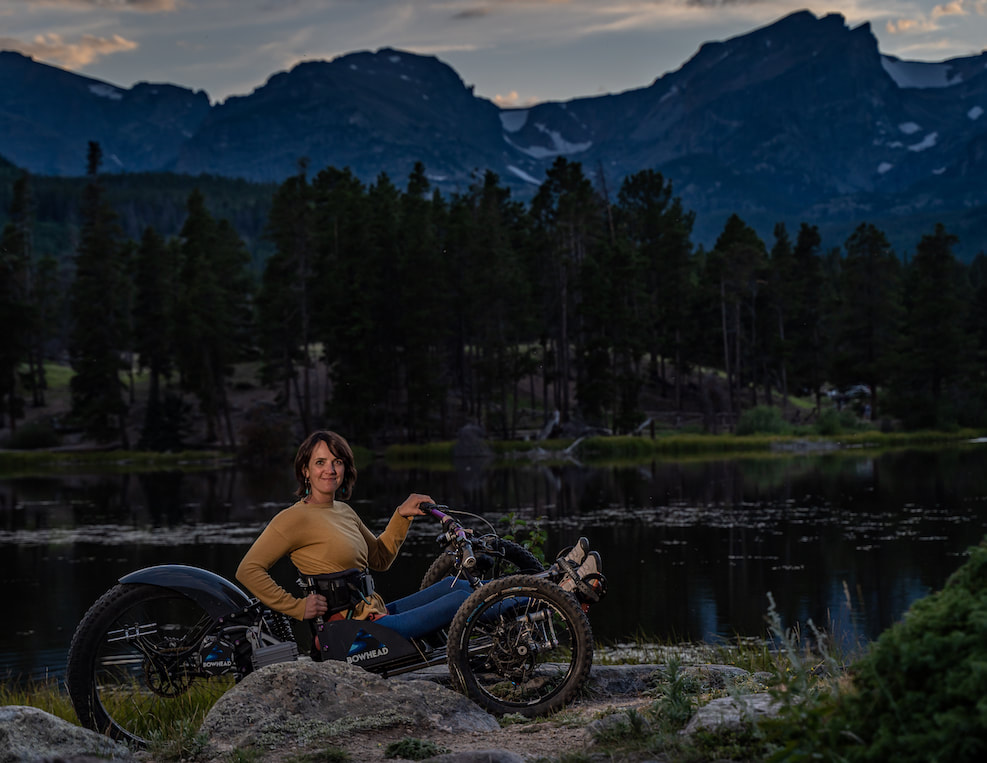 Photo credit: Zac Bunch
​Can you tell us why you got into climbing in the first place?
​
As a kid growing up in Minnesota there wasn’t much but family vacations to national parks that had us exploring new terrain. I just got more and more exploratory.  Climbing just happened and when I moved to Estes Park as a 20-year-old, there were REAL rock climbers who were willing to take me beyond my youthful dreams.
What are some of the organizations and causes you are involved with and why?

Before my injury I was involved with Paradox Sports (ironically). Paradox Sports is an organization that exposes folks to rock and ice climbing with injuries like amputations or spinal cord trauma.  I am still involved with them. I am also a big supporter of High Fives Foundation - without them getting outdoor toys would be WAAAAAY too pricey.
​
I’m also active with the Access Fund and American Alpine Club, as I am still in the climbing community and advocating for safe keeping of our public lands--- actually, more so now with a disability. Access for us into the backcountry is nearly non-existent, or it’s not known that we have these incredible new mobility devices to help us do so.
Have you taken up anything new recently in the way of sports or other activities and if so, what are they?

​I Nordic ski - I haven’t done that since high school in Minnesota :0.  I used to bike a fair bit when I arrived to Colorado and it simmered as climbing and running took over.  I’m back to biking, playing the piano, doing some art... things I did growing up.  Learning to make bread.  That’s new! 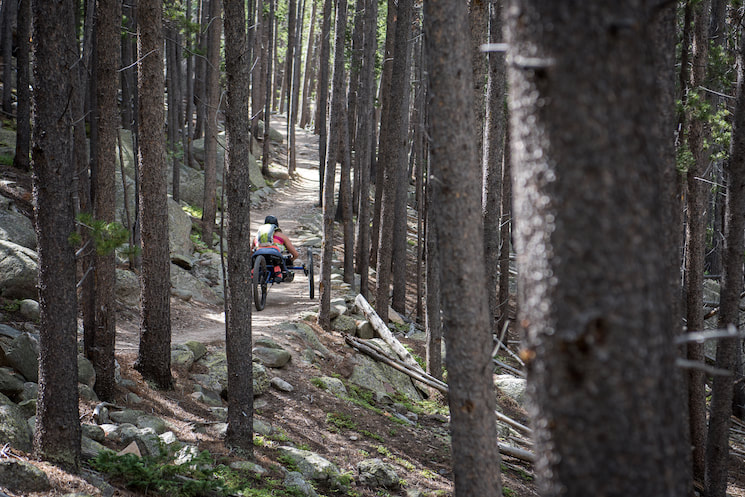 Photo Credit: Jimmy McAllan
​Do you have a training routine for your sports?

Not currently.  I swim three to five times a week and have been doing rehab on my elbow, which was dislocated on New Year's Day.  I’ve kinda always made up my own “training” regimen based on science and other people’s routines, but also just my own opinion.  My philosophy is to move and be outside mostly.  ​
Do you listen to certain music to get you pumped, and if so what?

Total variety music lover here.  I’m listening to Lady Gaga right now, as I type. It has a nice beat. I loved Lemon Jelly when I ran. Oddly, I’d also listen to podcasts for long runs.

Are there any funny stories or observations you have made in rehab, or since being injured, about the differences between life now as opposed to when walking?

​Some funny stuff…Well for me, I said some crazy shit like, "I will stop being a climbing ranger when my legs fall off" (referring to it being a pretty fitting and awesome job, albeit not well-paying).  Well my legs haven’t exactly fallen off….Or things like, "I am the girl who can’t sit still." Now, I am sitting but still can’t sit still. I fidget, I need to move, get out of the chair -- go, do, get after it!

Enock: I often will see people who have been injured and done rehabilitation using techniques they learned there.  I will do the same thing differently because I figured it out on my own.  I always wonder if it would have been easier to be taught.  There is one technique I see a lot where people bump their wheelchair up and down stairs.  Every time I see it, I think that looks totally dangerous and way harder than just getting someone to take the chair and then climbing up the stairs.
Are there any serious observations or thoughts you have had that you think might benefit someone else?

So many… I feel like I wish our community was more educated. I’m pushing for that.  There’s a free book called “Don’t Call it a Miracle: The Movement to Cure Spinal Cord Injury.” It’s a great resource for people to learn about their injury and the science ACTUALLY--- instead of spending oodles on “stem cells” in a foreign country.

Advocating, speaking louder, getting out in public is IMPORTANT.  The American Disabilities Act (ADA) ticks boxes but doesn’t work practically in a lot of spots. If we don’t make noise about it, people won’t know, and changes won’t be made.

Enock: Don’t get me started on the ADA. Haha!  I could go on and on.
Is there a favorite food you eat while training or performing sports?

Peanut butter was a favorite before the injury.  My taste/smell has simmered considerably since then. I hit my head, so now I gravitate to stronger salts and sugars.

Is there a food you must stay away from?

​Kiwis!  I have eaten them three or four times in my life and throw up every time.
What really motivates you to push yourself hard?

The mental and physical unlocking of problems.  Hand Cycling has become a release in that way, thinking outside the bike on certain terrain -- using rocks and hillsides to my advantage or “climbing” through them. 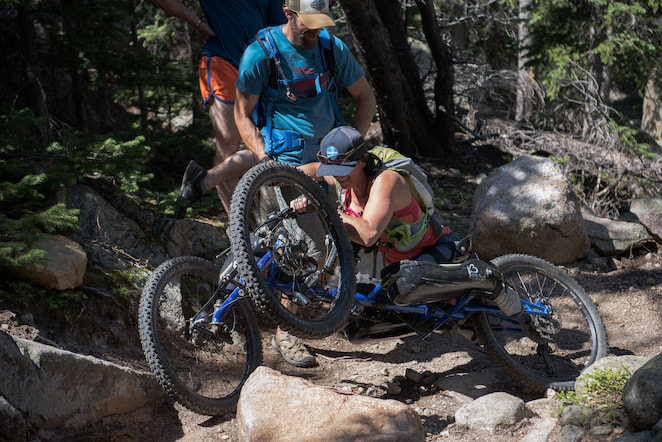 Quinn on a Reactive Adaptations bike. Photo Credit: Kraig Decker
What person has had the biggest influence on your climbing?

When I was a young lady, Katie Brown was of similar age and just breaking barriers!  Heidi Wirtz became a mentor when I moved to Colorado, also trying hard with grades but in the mountains and with efficiency.  She is now a good friend.

Do you climb outside or gym only?

I have done both since my injury, outside is way more fun.

What is your favorite type of route or highest grade climbed since the injury?

Meh, I have messed around on 5.12, but I am mostly getting power assisted up.  Pull-up after pull-up is just not that fun.

Enock: I totally agree. Four thousand pull-ups on El Capitan was not the fun part of climbing it.
What’s your most excellent adventure (climbing trip) so far?

I have pondered some climbing adventures again, but also have been working with engineering friends to create a device for the lower legs that would allow me to climb a crack, not just campus face holds.  We’ve discussed the First Flatiron, Bastille crack, and yes, some things in Yosemite. But actually, I am not sure I really need to.

Enock: I recently saw the piece you were a part of on HBO Real Sports with Bryant Gumbel.  How do you think you were portrayed?  How do you think they portrayed the risk of climbing as a whole?
​
It’s their story to spin how they wanted.  I am glad they didn't make it too "jazz-hands" that climbing is outrageous.  It is dangerous and you can mitigate some risk...to a point.  It is not safe, but neither is driving a car on an icy/snowy day -- consequences can happen in a hundred different ways. How do you mitigate?  Drive slower?  Snow tires and All Wheel Drive?  Don't drive that day?  Same with climbing. It isn't safe but how do you mitigate?  Use a rope.... rock can cut it. That happened recently to Nolan Smythe.  Wear a helmet? Rock can fall or it can fling off on your fall (like mine did).  Climb well below your limit? A foot can still slip (see Tommy and Alex on the Nose movie they just did).  See my accident.  I rarely fell on 5.10, but here I am, paralyzed.  That is because I wasn't using much gear, I was choosing (that’s not the right word but it’s how it turned out.) I usually used two or three pieces in that spot and this day, who knows what the shit I was doing? Anyway, I was 'choosing' to not mitigate in my usual fashion of gear, therefore I was at higher risk and fell.

The conversation Libby and I were going toward was reminding people that it’s not "safe” - don't fool yourself.  We all love it and I miss it from time to time. Mostly I miss running and hiking in the mountains, but I am sure if I wasn't injured, I would still be pushing myself in rock climbing.  We can't take the paintbrush away from the artist, but you SHOULD be aware of the risks of the paint you're using, the carpal tunnel... that crap :)

Enock: I love how you say, “We can't take the paintbrush away from the artist, but you SHOULD be aware of the risks of the paint you're using.” I know when I climb, at least for now, jugging rope, I am at the mercy of trusting the rope has been fixed and tied correctly at the anchor and that the rope won’t break somehow. There is some lack of thought of the risk in order to do the climb. I tie backup knots to mitigate the failure of my ascending gear, but I have no control over the rest. Climbing is dangerous, and your messages are making this explicit. Within that realm of danger, some choices we make or things we do (or don't do) can make all the difference in the world.