Climbing in Ecuador  - A Nation of Four Worlds

By Dave Barnes and  Felipe Proaño
Photo Credit: Nicolas Davalos
I recently caught up with the Indiana Jones of Climbing, Ecuador’s own, Felipe ‘Feli’ Proaño.  Feli recently released his second guidebook to his nation, Rutas de Escalada en Ecuador Vol 2 Zona Central.  Feli provides direction and tips for all those with a taste for adventure and who want to experience the treasures of climbing in a unique part of the planet not often spoken about, until now.

They say Ecuador is the nation of the four worlds. Although it is the second smallest country in South America, Ecuador’s diversity of environments is extraordinary - from the Galápagos Islands, to the high peaks and glaciated volcanos of the Andes, to the warm Pacific Coast, and the lush Amazon Jungle.  With this diversity comes an array of astonishing rock climbing and mountaineering sites which brings out the adventurer in all who enter its borders.

Ecuador’s first sport routes were put up in the late 1990s and climbing has steadily grown throughout the past decade with the discovery of sites such as The Columns of Tangán and the Towers of Simiatug. The names of these places add to the intrigue, it’s like I’m reading Lord of the Rings when I explore Feli’s guidebook.

An epic part of a kick ass climbing trip is finding adventure both on and off the rock. Ecuador has more than two dozen cultures and ethnic groups, Inca ruins, extreme weather conditions and some draw-dropping Jurassic Park environments (minus the dinosaurs).  There are high altitude peaks above 4000 meters with jungle down low, much of which is emblazoned with majestic flora and fauna will leave climbers mind blown. Feli swears there’s even more to explore and discover. ​ 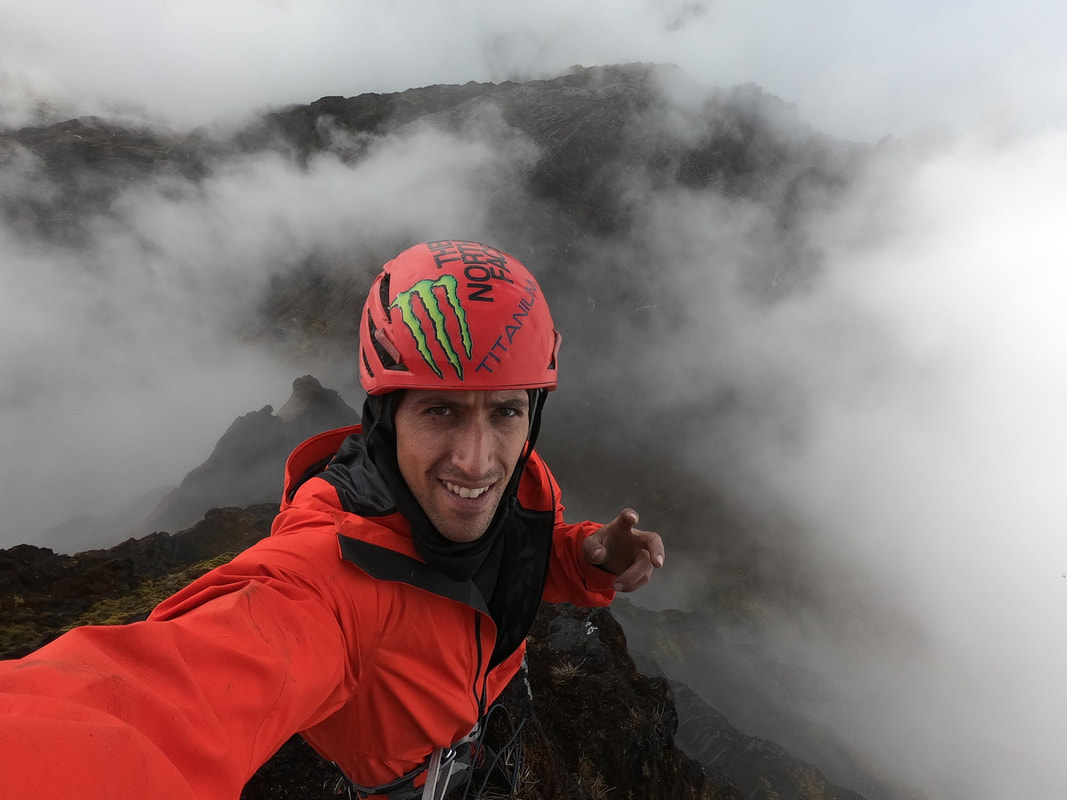 We have some cool stuff happening in Ecuador. We discovered a new crag recently, Simiatug.  I have published the second guidebook of Ecuador last month, but even now, we have found a hidden big wall which takes four days of trekking through the jungle to reach.   It’s going be an expedition so will need some investment to bring that adventure to reality. The wall rises out of the jungle at 4000m of elevation. My friends and I are still in project mode, so when we have had success we will share the location.”

I can feel that jungle sweat right now and its making me thirsty.  Feli did not grow up in a climbing clique and his beginner story adds to his Indy vibe.

The first time I climbed in Ecuador I had no one to guide me and I wanted to go high but that was too dangerous, so I needed learn the rock basics first. No one trained me - I was guided by a pure love for the unknown.  Later on I found a couple of mentors and climbed with several clubs.  This led towards finding friends to share the rope with.”

Climbing is a growing recreational pursuit around the world and Ecuador is no different with climbing gyms and climbing companies introducing people to rock and ice.  There is a growing interest in the volcanoes and their wild landscapes. These offerings are bringing intrepid tourists, and these in turn provide work for climbers.

“The Climbing Community in Ecuador is not huge but it is growing. I would estimate there are approximately 3000 climbers down here.  Quito [the Capital City] is a great place and there you will find Vertigo Escalada (climbing gym) to hang out and to meet friends.”

The same place has the Sabai Brewery nearby which is owned by climbers. This is the where the climbing community hangs out.  How smart is that? Climbing gym – Brewery, a perfect marriage. ​

When I was younger all I could associate with South America was drug runners, chickens in the street, hidden Inca cities and short women with big hats and certainly not rock climbing. It would not have been on my list for places to check out. I am feeling like a doofbag now, as I know that people are people wherever you go. There is a lot of climbing to explore in South America and it has always been a place of exploration. Feli has this to say about folks, who are not sure about travel to Ecuador:

“I would say that all of South America has certain risks, we are certainly not one of the world’s First World nations but so what, exploration has been done by taking risks.  The Andean Countries are welcoming visitors from all over, it is a safe place to travel. What makes it unique is the diversity.  A climber can be in three different climate regions in one day (the Pacific Coast, the cratered spine of the Andes and the jungles of the Amazon)." 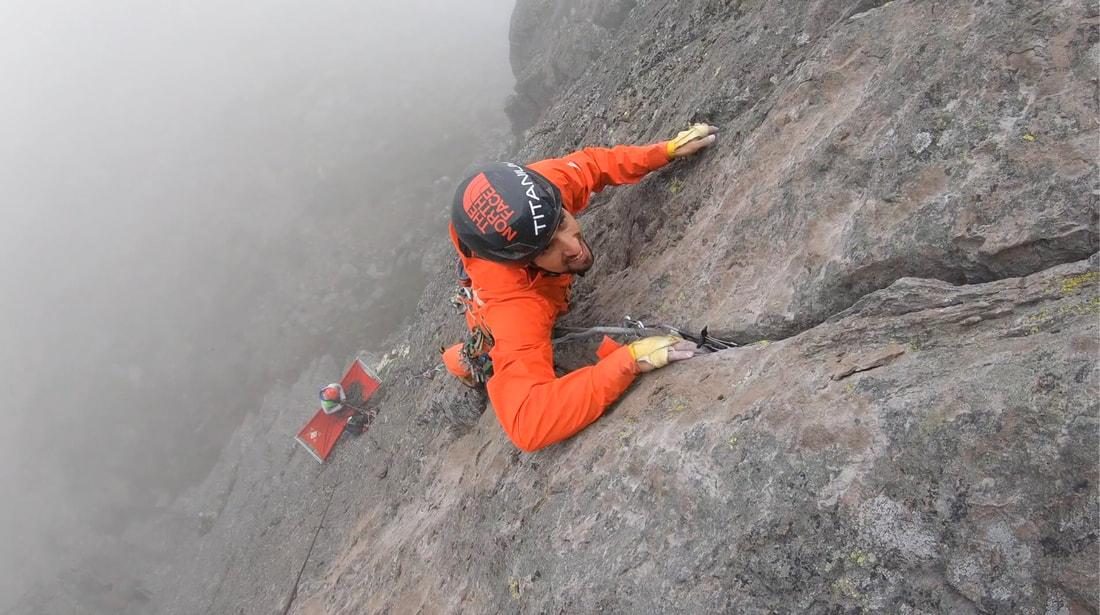 Route: Inti ñan (The Sum Path), a three pitch crack graded 5.12b or 7b or 26 at Simiatug. Photo Credit: Kevin Castellanos
​Felipe loves the rock climbing and has been making his mark finding new crags and putting up routes, some near or in cities and urban areas and others shrouded in morning mist then striking out of the cool jungle canopy. Some unique tools have been used to develop crags in Ecuador, and new routing has had some challenges for Feli and his friends...

“We were opening lines in Tangan in the middle of a rainy season (Rain in the jungle has two distinctive seasons, rainy and flooding rain). I was aiding up this crack, climbing with a machete in hand to cut vines and clean the thin crack from mud and roots. I came up to this cruxy move and decided to put the machete in between two vines some fifty centimetres above my last piece (a micronut). As I top stepped, the piece blew out taking me down for a big fall because the two other pieces other exploded out!  I was lucky to be held by a red C3 and just missed the ground. The smart move was leaving the machete on the vines since a fall with such a sharp piece of metal could have ended badly. Anyway, the machete lived up there for a few months, since no one dared to go back up to finish the route, until my friend Juan Merlo took up the lead.  It gets better [sic], he retrieved the machete but accidentally dropped it almost cutting his rope and worse, his girlfriend Mara! That weekend anchors were bolted and a consensus for the line named, Flying Machete, which now stands at a solid 5.11 (6c or AUS 22).”

The hardest sport route red pointed in Ecuador is at San Juan, at almost 4000m of elevation.   The hardest trad route is in Tangan, probably in the range between 5.13c and 5.13d. I was unable to get a defined answer which means it is probably harder! Classic routes can be found at Tangan, San Juan and Cojitambo. Feli has a favourite and shared with me how stoked they were when they discovered, Tangan in 2013.

“My favourite crag is Tangan - just about any climb there because it is crack climbing in the jungle. Some climbers found a YouTube video of the area and went exploring the Western jungle slopes in the vicinity of the video, it was private property but the owner didn’t live there. We developed some routes and the next year the owner saw some video of us climbing at his place, he decided to move back to meet us. A relationship began where climbers can visit Tangan and the owners offer tourism opportunities which has enabled the area to be developed. ” 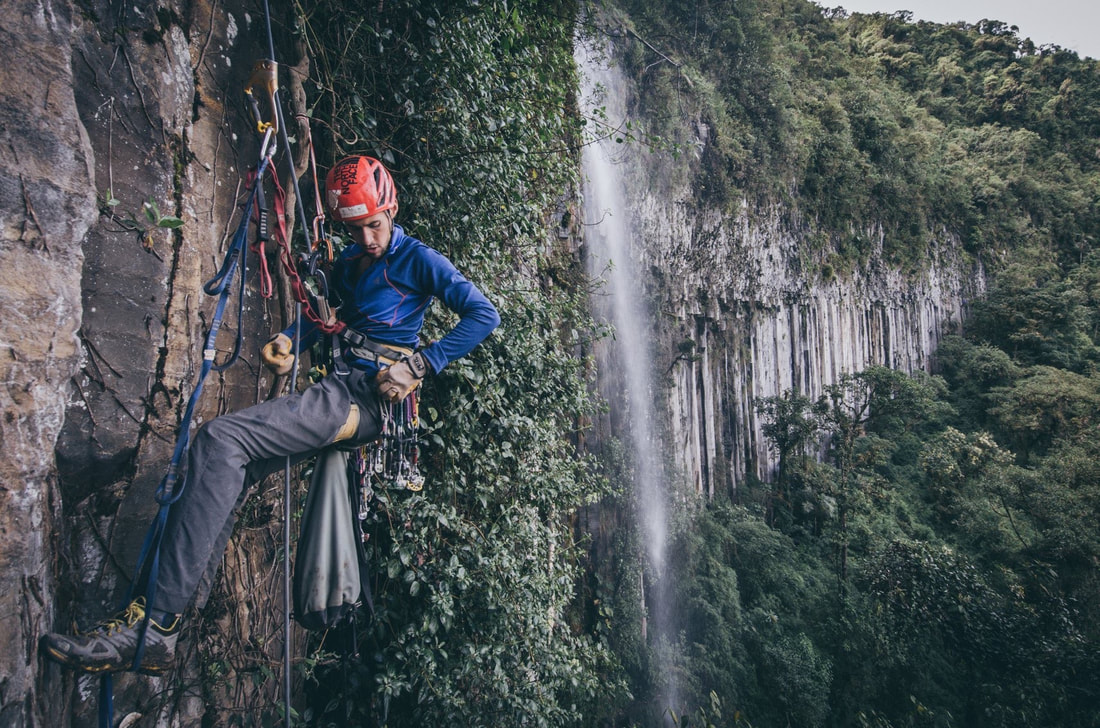 Feli in Tangan. Photo Credit: Nicolas Davalos
​Roads and local buses can transport you to many areas one of the main ones being, Cojitambo. The crag reminds me of a mix between the Cathedral Range in Victoria and The Glass House Mountains in Queensland, Australia (I’m not sure what an American or European comparison crag would look like…[It looks like a volcanic version of El Potrero Chico, Mexico…Ed. Stef.]
​
Cojitambo is not hard to access and on arrival red rooved village homes scatter the green hilled landscape. It is a popular area with visitors and locals alike. It has a 5.10b five pitch classic called, Capac-Ñan, meaning, Royal Road in local Andean language (Kichwa).  The route is off vertical and consists of a corner system snaking its way to the summit with every type of crack and which will eat up your entire rack but who’s complaining about that?

As the popularity of climbing continues to increase and our sport evolves more folks are going to be seeking out new places and adventures.  I can see a climbing connection happening down the east coast of South America as new generations of climbers go seeking their Zen on the road and finding their way through the curtain of life’s challenges by a bit of antipode escape and through meeting different peoples. This is a climber’s rite of passage but as we adventure into new areas to climb we have a chance to take what we have learned in climbing ethics and environmental conservation with us. We can be climbing collaborators of today not Conquistadors like our past.

As I write this Feli was out there in the jungle working his way towards a new find.  Climbing treasure is what he is seeking today and I hope he finds some classics.

Get a real feel for climbing in Ecuador with these short, well-produced videos!
​Video Directors are Levitar Media House: André Sebastián Acuña and Arturo Albornoz.
​The climbers in the videos are: Andrea Castillo and María Fernanda Cevallos
More videos of climbing in different locations in Ecuador can be found at the You Tube Channel for: Latitud Cero Climbing
Felipe Proaño: The North Face Athlete from Quito, Ecuador, is one of Ecuador’s most accomplished and motivated climbers.  Author of two rock climbing guidebooks, Reel Rock host and the President of the Andean Access Foundation, Felipe loves exploring and developing new rock climbing sites in Ecuador and other countries in South America. A loyal believer of tourism as a channel for economic progress and growth, Feli has travelled worldwide to learn from others whilst seeking adventure and first ascents. A link to his guidebooks are provided below:

Feli welcomes contact for climbers looking for additional information about how to get out and about climbing in Ecuador.  He can be found at
Instagram: todosumaclimbing
Facebook: @feliproclimber