By Howard Bevan
In 1971, four young Aussie friends go to Chamonix, France to climb the North Face of the Petit Dru (among other things). The Petit Dru is an 800-meter (2625-feet) mixed rock and ice climb. Keith Bell, John Fantini, Chris Baxter, and Howard Bevan pair up (Keith and John, Chris and Howard) and unknowingly enter into a no-holds-barred race to the top in this challenging terrain with 10+ other parties.

The friends end up losing track of each other while on the mountain and have two completely different experiences - each described here in Common Climber in a unique "tale of two climbs" stories.  On this page, Keith Bell shares his experience in "Horses for Courses: The Dru Derby 1971" while Howard Bevan shares "My Dru Derby"

In a cool trifecta, we also have a copy of the original published account by Chris Baxter. In 1971 the story was published in Argus, the newsletter of the Victoria Climbing Climb of Mebourne, Australia, and Thrutch, an Austal-Asian climbing magazine. Read all three and experience the unique perspectives of each climber!
We were right in the thick of things when we reached the snow slope that leads to the face.  The scramble up the snow and the first couple of pitches on rock did not separate the first group of about six ropes In fact most of us were still climbing unroped and were spread all over the rock face.

When we reached the choke point, a chimney leading into a couloir, clearly the start of the climb proper, some organization was called for. The various ropes got sorted out and began stuffing themselves into the chimney. John and Keith had a slight lead but that only served as encouragement for the next few ropes to use their runners, which of course Keith removed as he passed them, leaving the leaders of the following ropes basically unprotected. You see some bizarre things in the Alps!

We had lost some ground while Chris figured out how to attach and remove his crampons. A heck of a time to find out that he had never climbed with them. An ice axe was, as far as Chris was concerned, a tool for making large cocktails.

We, however, were not without a plan. One of us would lead five pitches then the other would take the next five pitches. Clearly this had to be modified slightly so that I was to take the obvious snow/ice pitches while Chris took the dry and/or broken rock. Of course no plan is perfect and I managed to score the Fissure Lambert and the corner above - the best two pitch of rock climbing on the route.
​
For those unfamiliar with Alpine climbing, being first on a route can literally mean the difference between life and death. Of course, being the first to reach the summit and start your decent, the reverse is true. Earlier in the season Keith and I had to abandon our decent from the Grand Capucin and "holed up" under an overhang while a couple of Italian ropes charged down the couloir dislodging boulders the size of houses as they went — but that is a different story.
​
Having shed our crampons, we made up some ground, passing two ropes, which left one rope between us and the other half of our team, John and Keith.

I was climbing well, faster than I ever had and enjoying the exhilaration of being on a famous route. For the past two years I had relied on Keith to set the pace with me chuffing along behind.
​The relative quiet of the early morning was broken by a shuffling and scraping drifting up from below. Our Continental friends from the night before had, unlike everyone else, stuck to their starting time and were now going to school us in the ways of a European mountaineer.

Lesson 1 - stay unroped for as long as possible.
Lesson 2 - if there is any chance of hitting snow, ice or verglas ahead, leave your crampons on.
Lesson 3 - use an ice axe that resembles a north wall hammer - one you can use like a butcher’s hook, thereby extending your reach by a foot or so.

​The two Continentals zoomed past me with a tut-tut attitude and headed for the two leading ropes. We shared a stance or two with them, but above The Niche, still wearing their crampons, they pulled ahead, and we never saw them again.

Above the pitch following the Fissure Lambert, the climbing was unpleasant, steep, icy, and sustained. The crossing of The Niche signified the end of my five pitches. The lead parties were now out of sight above. A group of ropes were below us; we could hear them but not see them.

​An English team bubbled up from below and shared a stance with me.
In a display of bravado, I wiped the blood from my face, and with all the confidence I could muster told him that I would be alright, and he should climb on or he would be benighted. He scurried off. I brought Chris up but there was standing room only on the stance so the triage would have to wait.

There was very little discussion. Retreat was not an option, and a possible rescue would be easier the higher we went. It was onward and upward then.

The topo indicated there were six pitches left, varying in difficulty from Alpine IV- to V+. Added to the grades, was the higher we climbed, the heavier the verglas.

The sun had just dived below the horizon and in desperation I clawed up the British belayer using a sling on his anchor-peg, stood on his rope and fought past, nearly falling into his open mouth.“

Chris was starting to get the hang of this alpine climbing thing! He forged on.

I had been very lucky. Most of the climbing since my fall had been vertical, with very little traversing. This meant Chris could give me a tight rope where I needed it.

Not so the final pitch for the day - a long traverse to the right, up easier ground, then around a corner to the Quartz Ledge – our bivvy site for the night. I finally plopped onto it completely exhausted.

Chris was also pretty tired. All we could muster was a couple of brews and a Mars bar each before trying to sleep. We did not have sleeping bags or mats, so it was duvets and wet britches with boots off inside a nylon bivvy bag on bare rock for us.

The night seemed endless, but sitting atop the Bonatti Pillar had its diversions. The lights of Chamonix were directly below us, twinkling in syncopated rhythm with our shivering. Every now and again thin clouds riding invisible zephyrs turned the valley’s lights off only to have them slowly return to their former glory as the clouds scudded on. In short, a long cold night with little sleep - a typical alpine bivouac.
The glacier was heavily crevassed and jumping even the small ones was out of the question for me. We had to take the long way around each and every one. It was torture.

​It was mid-afternoon when we finally reached the hut, and I could go no further. As a final indignity, we did not have enough money to pay for the night’s accommodation. The custodian however took one look at me and opened the door to us. He even fed us and gave me some codeine which allowed me to sleep and recuperate. I will forever be in his debt.

The next day dawned fine and warm. I had yet to figure out the best mode of descent down the steep, rocky track to the Mer de Glace. I tried facing downhill, uphill, and sideways, but all caused great pain. Desperate conditions call for desperate solutions.

At one point I sat down, faced uphill and slithered backwards on my bum dragging my useless leg down with me. Fortunately, my serge britches were almost bomb proof with a reinforced rear end for good measure. They survived the indignity without complaint.

After a couple of hours of slithering we stopped for a rest and some water. Upon looking down the slope I could see several individuals making their way up the scree towards us. Keith and Mike, a non-climbing friend of Chris’, along with, of all things, a nurse, were coming to my rescue, and I was bloody glad to see them. It appeared that the two Brits who had helped me directly after my fall had found Keith and Mike in the valley campsite and informed them of our plight.

Not stopping at simply raising the alarm, a friend of theirs, a British nurse (who’s name regrettably I do not recall), offered to accompany Keith and Mike up the hill and render assistance. Render she did. The wound was cleaned and the knee wrapped with about half a mile of adhesive bandage. The support this gave to my leg was magical. 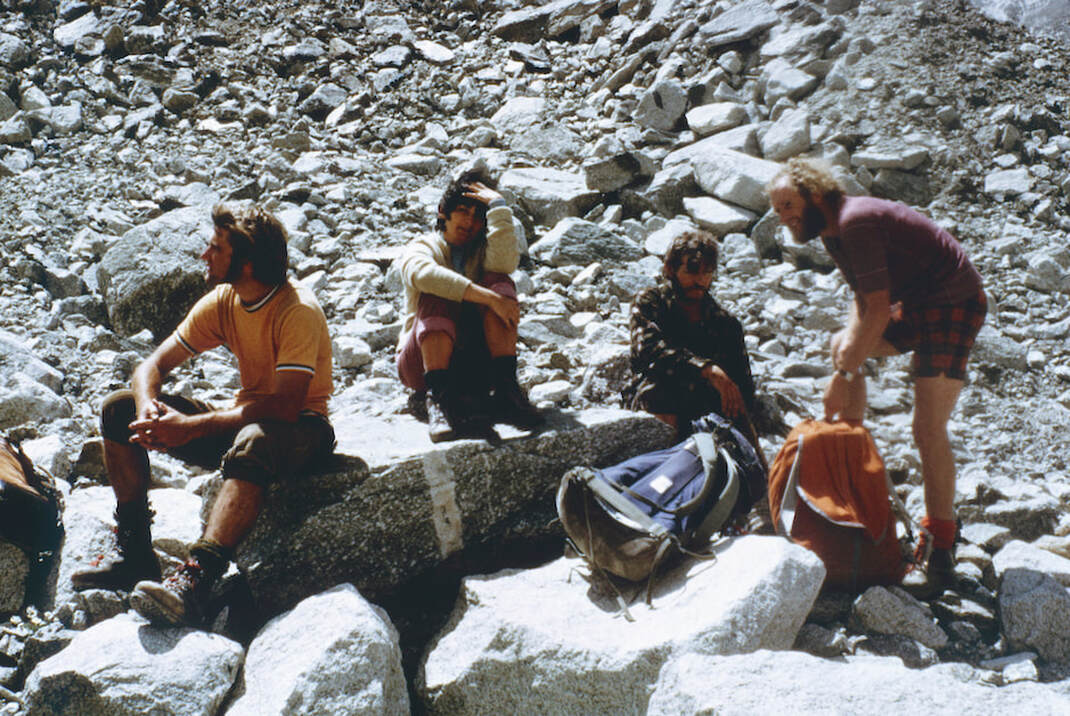 A rest on the track down to the Mer de Glace from the Charpoau Hut. The terrain gives a good indication as to how steep and rough it was. (L-R) Keith Bell, unknown Nurse, Howard Bevan and Mike Brown. (Photo Credit: Chris Baxter)
Now, with Keith and Mike carrying my pack (Chris had already taken the heavy items from me) and taking turns to support my left side, I was able to hobble down the scree to the Mer de Glace. When we reached the flatter, smoother glacier, I felt like I was running. Well, not quite running, more like Pirate Pete swinging his stump. The others had difficulty keeping up. Of course, I may have been delirious and just imagining this.

The final obstacle – the ladders from the glacier leading up to Montenvers Station – could not slow me down.

Keith and Mike magnanimously proffered their return tickets on the railway so Chris and I could ride the last few kilometers into Chamonix in style.

What followed for me was a visit to the hospital where I was given the choice of a full leg cast or a tensor bandage to take care of the cracked knee cap. I chose the bandage solution - after all I had more climbing to do. This was followed by a trip to the dentist. Now that was frustrating. We could find no one who would admit to speaking English - and since there is not a great need to speak French in Australia, I had never learned how. In the end the dentist troweled on some cement to seal the tooth and called it done. When I got to London a couple of months later, I had the tooth yanked.

Following this experience I made it a priority to learn a spattering of the local language. Sherpa, Nepali, Swahili, Spanish and Quechua were all abused in the following years.