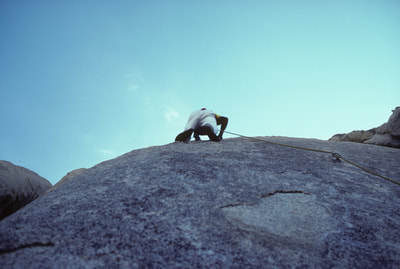 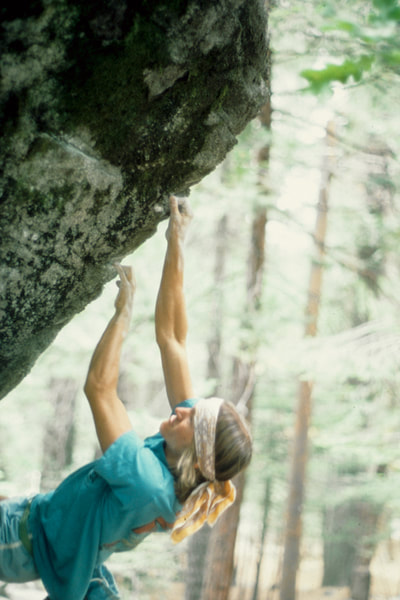 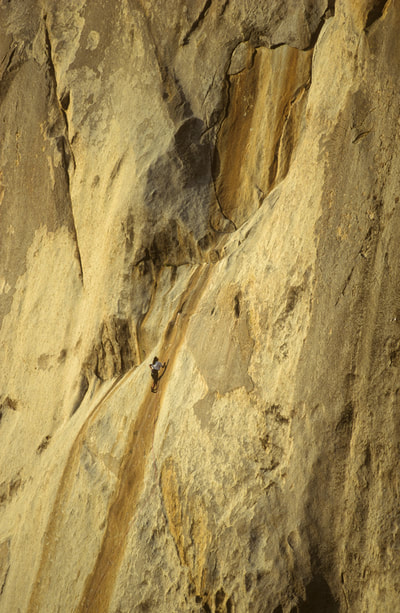 The “He” in each of these scenarios is Kevin Powell. But Kevin’s excellence and adventure doesn’t stop with these three examples; “He” is so much more.

Kevin began climbing in Joshua Tree in 1973 and has established numerous routes including:
Kevin trained for that 5.12 by climbing the brick chimney in the backyard of his home and the brick walls of his high school. It was supplemented by small-hold bouldering in JTree and other locales like Mt. Rubidoux. Kevin became so proficient at tiny holds he was nicknamed “dimes.”

“Dimes” could perhaps have been in the national spotlight as a climber, but that has never been his mode of operation. Although in many of his endeavors he’s talented enough to attain the spotlight, that is not what motivates Kevin. Instead, he is driven by doing what he loves, for his own fulfillment. But Kevin isn’t just fulfilled by exploring his own creative and climbing outlets, he also loves to contribute to the greater good. 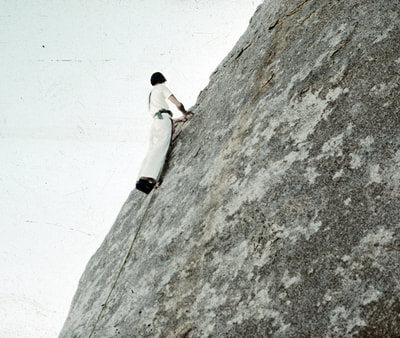 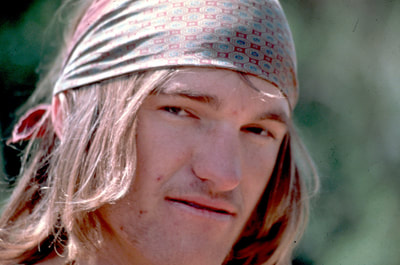 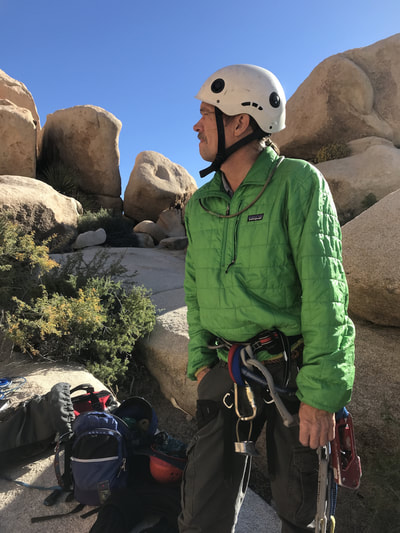 Dedicating much of his working life as a public servant, Kevin worked in emergency services as a paramedic and firefighter for 35 years. But he didn’t only save lives for work, he did it on the climbing walls too (and still does). For the past 30 years, Kevin has been replacing old bolts at Joshua Tree, Big Rock, Suicide Rock, Tahquitz Rock. This is done in his spare time and initially using his own funds and those of a few friends – to the tune of thousands of dollars (in 2001 he started receiving bolts, hangers and other related hardware from the American Safe Climbing Association - see the article Improv at JTree: Three Characters Attack Bad Bolts With Humor, A Device, and Dedication). Replacing bolts is nothing short of a labor of love, as it is physically arduous, slow-going, and expensive.

In addition to climbing and replacing bolts, Kevin is passionate about photography. For a number of years he was a professional climbing photographer, selling photos to Climbing and Rock and Ice magazines as well as Black Diamond and Patagonia. This was in the days of film, before the digital revolution opened the photography floodgates (Kevin tells a story of a photo shoot where one of the top American climbers of the time was working on a first ascent of a new 5.14 when he realized he forgot to put the film in the camera!). Kevin was one of the climbing photography originals.

Now, Powell is fully in the digital photography realm, but he has shifted from climbing photography to landscape and wildlife photography. His wildlife shots are unique, intimate, and gripping. Trying to put them into words does them no justice – a leopard glows in the golden afternoon light; an ewe urinates while a ram, his nostrils flaring, smells the stream to see if she is fertile; the dark profile of a young ram leaps across a chasm.

Each photo brings you to the edge of your seat, you are drawn into the intensity of the moment and the majesty of the natural world. (Be sure to click on the photos, really look at them!) 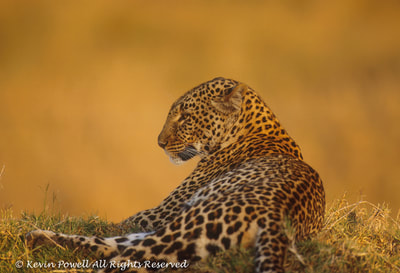 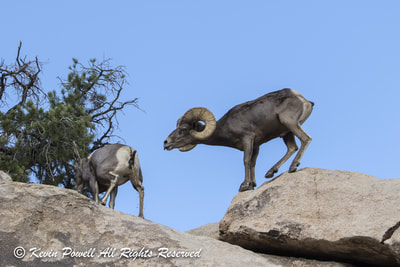 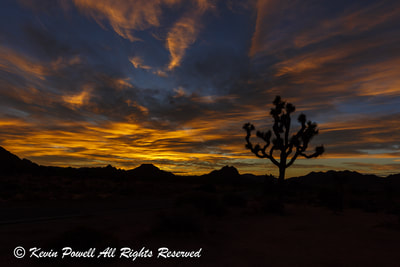 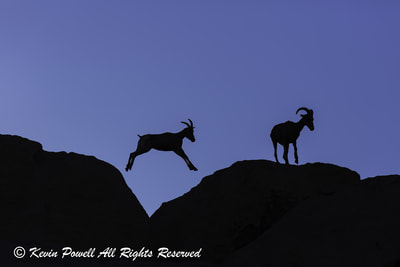 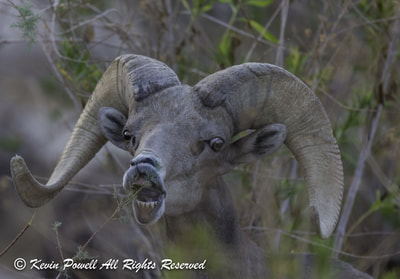 Kevin’s deep familiarity with Joshua Tree and incredible photography lead to an invitation for him to write a JTree hiking guidebook. Released in 2017, the book includes 40 hikes illustrated solely by his photos (40 Classic Day Hikes of Joshua Tree National Park). Kevin did extensive research on JTree history to help bring what you see on the hikes to life.

Many people beg Kevin to produce a coffee table book of his work, but he just laughs and thanks them for the complement. Kevin takes these photos for his own joy. Assembling photos, and the logistics and expense of making a book, at least at this point in his life, would take away from being out in the wilderness snapping the next shot, experiencing the next wonder. Although he is truly an outstanding wildlife photographer, Kevin’s photos are solely about being there in the moment and adding the experience to his spirit – and you can totally see it in each shot.

When asked the question, “What do you want people to know about you?” Kevin’s response is this: “I prefer simplicity, a modest amount of adventure, immersion in the natural world, and giving back.” That’s it. A simple answer that shows in his actions again and again.  The one thing that surprised me about his answer, though, was he didn’t mention laughter. Kevin likes to laugh and, frankly, he makes others laugh. You can get a flavor of his jokester personality in the article “Improv at JTree: Three Characters Attack Bad Bolts With Humor, A Device, and Dedication.”

Since Kevin is a JTree original and first ascentionist, I was curious about his perspectives on some of the bolting trends that are currently happening in Joshua Tree.  I appreciated some of his elaborations.

How should climbers new to Joshua Tree approach climbing here?

They should realize that this is mostly a traditional area and that falling is not part of the game. The rock is not overhanging like in the gym or at many sport climbing areas, so in a fall here you can hit things, the ground being one of them, as most climbs tend to be less than one hundred feet. You need to know how to place gear correctly, not just stuff it in to a crack and consider it good just because it seems to be holding right now. Most people that get injured here is because one or more pieces of protection failed.

What is your perspective/thoughts on the bolting of JTree? What are your thoughts on creating new face climbing in non-wilderness areas that are not protectable by trad?

[Regarding face climbing with no natural pro] If it is a natural looking line on good rock and well thought out, I can support that. But, just putting up climbs for the sheer volume is irresponsible. Some the people doing first ascents are not using all stainless steel bolts and hangers which is also irresponsible (NOTE: mixed metals significantly increases the deterioration of bolts, which is dangerous). People need to show some pride of ownership! But, as mentioned above, Joshua Tree is mostly a traditional area. Over-bolting is turning the park in to a climbing Disneyland. What people need to realize is that bolts are a privilege, especially on public lands and too much excessive bolting could lead to climbing restrictions.

(NOTE: The park has bolting guidelines at: https://www.nps.gov/jotr/planyourvisit/fixed_anchors.htm)

What about adding bolts to make an old/existing climb "safer?"

This is a definite NO! People need to learn how to train their mind to deal with run-outs. People have no problem training and working out to get more physically fit, but most are not willing to do the same for their mind. They actually cheat themselves by not experiencing things as the first ascentionist did minus standing there to drill the bolts. People have an inherent trust of fixed gear (bolts) without knowing any thing about them. They think they "are bomber"! What they do not realize is no one maintains bolts and any thing can be going on behind the hanger that you cannot see. I commonly tell people if you can place gear, that is always the better option as you can see what the gear is doing and you know the history behind the gear itself. [See the story: “Improv at JTree: Three Characters Attack Bad Bolts With Humor, A Device, and Dedication” to get a glimpse of what Kevin is talking about.]