By Keith Bell
The term "Mount" usually brings to mind a high snowcapped place with steep sides. It is usually on such places that climbers play. This is also true for Australian climbers who live on an eroded, sun-bathed island continent. Mount Piddington, in the Blue Mountains, 120 kilometres west of Sydney, is one such place. Except Mt Piddington is a miniscule pimple on the mountains' western edge, sardonically described by a leading climber as “the fearsome unclimbed summit …which, even in summer is capped by perennial swings, see-saws and a shelter shed."

It is also used as a climber’s car park.

​The key to its climbs is a subtle, descending road off its back, leading eventually to the base of a western facing sunlit cliff.  Strung out along it is the so-called Mt. Piddington climbing area, but most Australian climbers, in their abbreviated vernacular, just call it "Piddo."

Piddo is a varied amalgam of black, grey, orange, red, and yellow sandstone that is interposed with climbs, many of which are the jewels of NSW climbing. This is the home of Blue Mountains trad in its many guises. John Ewbank, in his 1967 seminal guide, described its bounty thus:

The cliff is uniformly steep, in the form of flat buttresses, slabs, walls and aretes split by fine cracks and corners. Most of the climbs lie up these, taking laybacking, hand, finger, fist and boot jamming, bridging and chimneying techniques to a highly developed art form."

Early pioneer climbers scampered up Blue Mountains walls in the 1930’s, they were affectionately but incorrectly called the "Katoomba Suicide Club" after a nearby town. Piddington would have to wait a further 30 years for its day in the sun.

Although others had climbed there first, it was Ewbank, a young lad of British origins, who took the place by storm. Teamed up with an equally young John Worrall, they slowly but surely, ticked off most of the plum first ascents. One that escaped this team was Flake Crack (17/5.9). Ewbank climbed it with Eric Saxby in October 1964, adding it to his formidable list of first ascents.
​Sitting proudly in the middle of the crag, Flake Crack is a hypnotic route with its initial flake giving access to a crack snaking through a steep wall  to the final crux, a small exposed roof that has caused many a suitor to spill "blood, sweat, tears and fears" before it submitted to their advances. Given a grade of middling number, it has been a "rite of passage" for many climbers.
​Flake Crack was first climbed in three pitches, as ropes in the 1960’s were only 40 metres (120 feet) long, compared to the greater length used nowadays. The climb also has a large, flat, convenient ledge at the top of the flake, and a comfortable stance at the base of the final corner chimney. As the last pitch is an easy ramble it is hardly ever done, and climbers escape by using a loose, fragile ledge that leads right to a convenient abseil station. An easy abseil down the corner below lands one within metres of the start of the climb and stowed gear.

Flake Crack was three pitches but makes an awesome mega single pitch. I have no idea how I did it when I was 18, I was lucky to own a single cam. This time I slid the 4 up as far as I could before gibbering above my gear. I have always been crap above gear, but maybe I had some youthful infallibility when I did it with the meagre rack of a uni student.

​So glad that I climb in the era of modern gear, Flake Crack would have been more exciting with old school boots and homemade chocks”.

Any aspiring crack-addict will be keen to jump on Flake Crack. The initial “flake” is dispatched with ease - it’s scary, but you can use arm strength and no technique. The middle bit is more complicated, but its five or so metres is well protected.

But then you arrive at the rooflet. The crack is WIDE, the gear is there but it’s not spectacular. The moves through the roof and onto the wall above are surprisingly bouldery - grade 17 – seriously?”

Located in the middle of Piddo, Flake Crack has a large sandy area at its base - a rather convenient place to deposit your gear for racking up and having lunch. Just left of this spot are easier beginner's climbs and many guiding companies also use this area as a convenient base. Countless eyes are then directed longingly at this particular route, which probably accounts for its popular status.

​It is a well-worn classic and the loss of the tree near the bottom of the flake is testimony to this.

Pitch 1 Saxby's Flake. Up to bush runner and up even thinner flake above."

Considering the traffic that Flack Crack takes - apart from the loss of the tree - the route is in remarkable condition. Even so, legend has it that a prominent interstate climber reckoned the flake moved while he was on it. He immediately descended, walked out, never to be seen at Piddo again. The locals at the time wondered what he was on apart from the flake.

I had been climbing all morning. I was tired and expected the flake to get the better of me.

An experienced friend gave me some beta to find the friendly foot jam which gave my arms a rest. I felt so satisfied at the top of the flake, such beautiful and rewarding climbing.

Then the crack. I felt relieved that the pressure was off my forearms - interesting smears and jams followed.

I was intimidated by the overhang but each hand snugs into the rock and feels bomber. I was surprised and inspired how the climb flowed, and my body seemed to know what to do. Such an exciting and satisfying route! My favourite crack to date."

For any climber who needs a break from the ‘dark side’ of modern sport climbing, namely the continual clipping of bolts, then Piddo is the place for you. Although some infiltration of the latter has been made upon its finer walls and aretes, there are still many classic climbs, such as Flake Crack, where nuts, hexes and cams of all types and sizes still rule - allowing the climber to use style, stealth and cunning in the placement of his/her pro.

Let me finish with the words of Ewbank who stated that:

Climbing there on the firm rock on a sunny day with a light breeze and the beautiful Kanimbla Valley stretched out below is indeed a delight in itself, be the climb 5 or 20”.

Amen to that brothers and sisters!!! So many other fine cracks and even walls await the discerning climber at "Piddo." 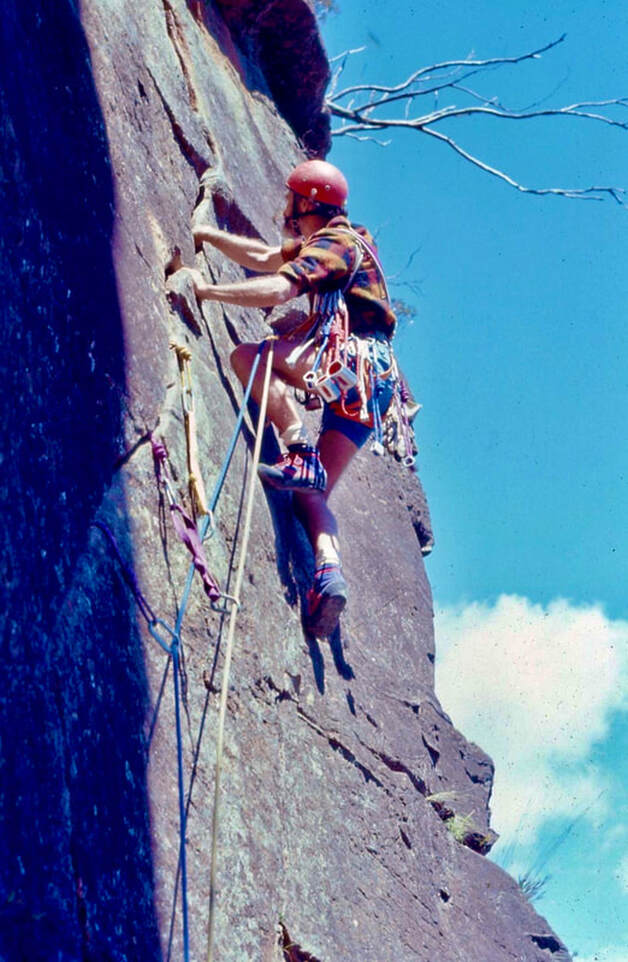 The author's friend Harry climbing in the 1970s blasting up the top crack towards the looming rooflet.