Common Climber interviews climber and photographer Helmut Schulze, who is from the city of Dresden located in the state of Saxony, Germany. Helmut shares his photos and some of his favorite areas to climb and photograph in the sandstone towers of the Elbe Valley of Germany. His partner Gerit Sophie Heidel assisted with translation. Thank you to both of you!
What made you want to pursue climbing photography?

I could say I took climbing photos my whole lifetime, but it has come and gone in cycles. However, in 2000 I was asked by a Dresden publisher if I wanted to be featured in a regional climbing calendar with my photos, and I have been doing that ever since - we just recently published the 23rd edition! Because of this calendar, I am always on the "hunt" for a good shoots of climbers!

A few years ago the Panico publishing house asked me to be the photographer for a climbing guidebook for the Saxon Switzerland. But, they were unable to find an author, so I took this task and wrote the guidebook by myself because I know the Saxon Switzerland very well.
What are some of the difficulties when shooting there at the towers of Elbe sandstone?

It is difficult to find a good perspective that puts the climber in the perfect limelight. Sometimes I need to climb the route itself to understand what the does relative to the landscape and how it might position the climber's body. Sometimes I have to place myself in very exposed positions to get a good angle that features the climber while allowing the viewer to see the surroundings.

It is actually becoming more and more difficult for me to get to the photo positions - especially when they are located on the rock face - because climbing ability naturally decreases with age and I'm facing that reality now. But, at least the camera equipment isn't as heavy now-a-days!
Can you describe a photo session or experience you are particularly proud of?

I had a vision for getting some unique shots of climbers on top of "Evil Tower" in the Region of Schmilka in Saxon Switzerland. I was there in the very early in the morning at the photo position, waiting for the perfect conditions. When the light and weather were right, my son and a friend started climbing in the middle of the night, so they would be at the top when first morning light arrived. The temperatures were just above freezing and the rocks were wrapped in a layer of fog. Then, as the sun rose higher, the light reflected off rock and fog, slowly dissipating the fog until it disappeared entirely. We were all excited about the continuously changing lighting and moods. 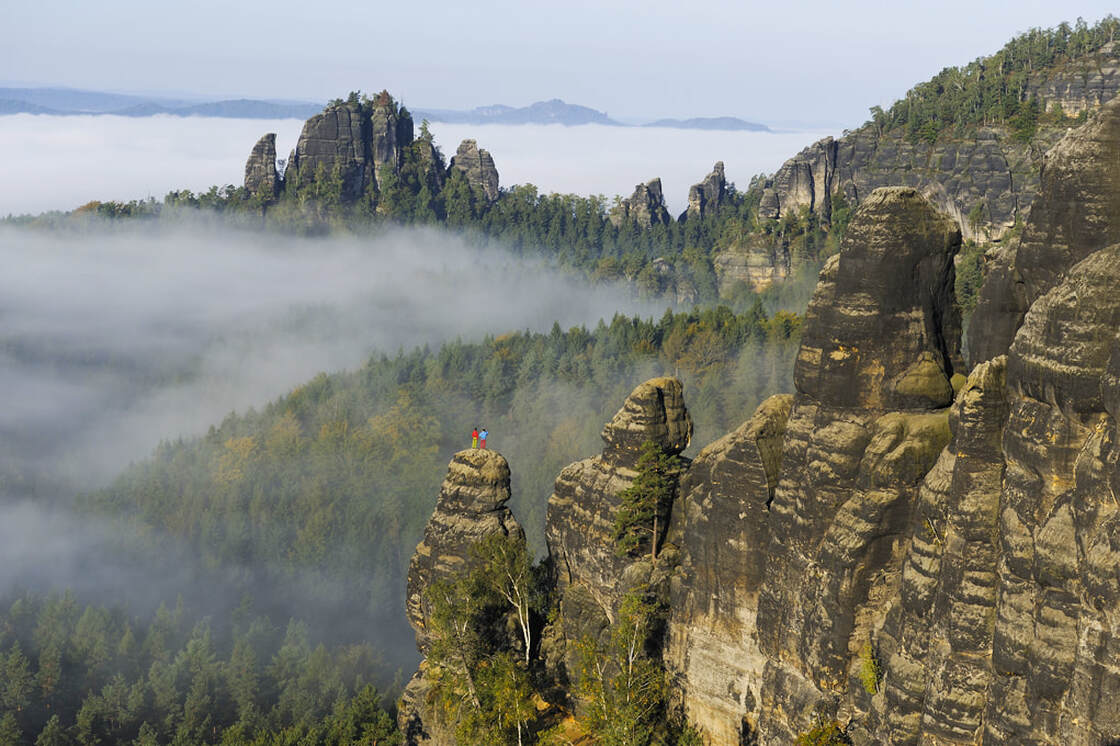 A foggy morning with climbers - Helmut's son and friend - on Evil Tower in Böser Turm, Germany. Photo Credit: Helmut Schulze
Are there any notable climbers he has worked with?

Years ago I took a series of photos with Bernd Arnold, who is a German rock climber and mountaineer who is known for climbing barefoot and climbing more than 900 first ascents in the 1970s and 80s. He established some of the hardest climbs in the East German Saxon Switzerland region.

When climbers came to climb in the Elbe Sandstone Mountains, I photographed them as well. This includes Kurt Albert, David Lama, Stefan Glowacz, and  Kilian Fischhuber. I also traveled to Venezuela and Jordan with Bernd Arnold and Kurt Albert.
Do you have any wisdom to share with other climbing photographers?

Everyone has to go out into nature by find their own visual language. It helps to get inspiration from other photographs, but don't copy them - find your own voice and photographic style. This takes time and experimentation.
Any last words?
​
The Elbe sandstone mountains is the most beautiful climbing area in the world. I invite you to come here and see for yourself! And, of course, you can buy the right climbing guidebook from me ;)