Ozymandias - A tyrant or something of immense size. King of Kings in Greek.

My name is Ozymandias, king of kings:
Look on my works, ye Mighty, and despair!"
Taken in part from a Poem by the late, Percy Shelley.

INTRODUCTION
THE BEGINNING
There was a spectacular spray of water as their water bottles exploded on impact. This incident put the Queenslanders a bit behind as they had to retreat to retrieve their gear and replenish their water.
Alan led off from our previous high point on Ozymandias Direct, and was a little apprehensive about the stability of the large rectangular block lodged in the roof.

"Are you two joining Ozymandias to Lord Gumtree?" came a shout from below. I looked down to see a great mop of black hair and a row of white teeth. "Yes" I replied to Rick.

In the meantime, Alan was already across the roof, finding that the block was solid and the crack above straightforward. Relief!

I finally moved past the roof and into the orange corner. While cleaning the corner, I detached a hand sized flake that was home to a very large huntsman spider. The spider had no intention of riding his house to the deck, so a long hairy leg latched onto a micro jug and he scuttled away in search of a new home. Quite impressive.
THE 25TH ANNIVERSARY ASCENT - JANUARY 1997
SEEING THE CLIMB WITH NEW EYES
Just after Christmas 2004 it was very cold. As I sat looking at the North Wall of the gorge through a light snowfall, I was joined by some other climbers. The one nearest to me introduced himself as Lee Cossey, the other two were Phillip Sage and Ryan McLoughlin. As climbers do, we started discussing aspects of the wall opposite us. It soon dawned on me they were about to try to onsite (free climb) Ozymandias Direct from the ground. The first five pitches of Ozymandias were freed in 1988, when the original climb went. Then in 1995, the same team (Steve Monks and Jane Wilkinson) freed pitches 4-9, starting from Big Grassy). But, to my knowledge, Ozymandias Direct hadn't been done free non-stop from the ground up.
"I'm going to try," said Lee.

The next day I went to the gorge to watch their progress, and later on rode my bike down to Bright. When I returned, I found that they, unfortunately, had not been successful with the onsight and were instead finishing up Ozymandias original.

After dinner at Lake Catani, I returned to the gorge and went to meet them as they emerged from the exit chimneys just after dark. It had been a big day for them. Once the team had recovered, they invited me down to the top of the big corner on Ozymandias to work on the final pitches prior to the red point. I felt this was a very nice gesture on their part.

As I watched Lee climb up to the roof, I saw the climb with new eyes. I was very impressed as he proceeded to do several laps on the roof. At the belay at the foot of the Black Fang, I had a very insightful discussion with Lee about various aspects of the climb. I followed Lee up the next pitch free, and found it a much more pleasant experience than aiding it, as I had done so long ago.

A few days later I got on Where Angels Fear to Tread and watched Lee do the red point of Ozymandias Direct. It was a truly amazing experience. How many climbers in those days would have gone to Mt. Buffalo with the intent to onsite Ozymandias Direct as their first climb of the trip? I was excited to witness their repoint.
THE 50TH ANNIVERSARY CLIMB
One only gets one chance to do a 50th anniversary climb, and Malcolm - my 25th Anniversary climb partner - was keen. I knew it would be a challenge for me, but I wanted to give it a go. On the 14th of February 2022, Malcom and I set off down the south-side track by head torch, arriving at the foot of the climb at daybreak.

We lead the same pitches as we had done twenty-five years before, only this time the second climbed with the pack and trailed a half-rope as insurance if we decided to retreat.

"This is heavy," said Malcolm as he took the pack from me.

"Yes," said I, trying to catch my breath.

I was much slower getting to Big Grassy this time around, but still confident we could make it to the top in a day. Malcolm set off on the next pitch but declared the minor corner too dirty and decided, instead, to go up Ozy original.

The party ahead of us kindly let us pass, and we were soon at the belay below the roof. I led the next pitch, but was unable to reach the stance below the Black Fang because I had run out of gear of the correct size. Malcolm got us to the Black Fang, and then lead the next pitch up to the chimney. By the time I had cleaned that pitch I was feeling very tired. We also finished the last of our water.

Malcolm led the last pitch by head torch, and, thankfully, hauled the pack while I cleaned the pitch. While I was slightly disappointed that we did not ascend our original path, the way we went is the way climb is repeated now-a-days - both free and via aid. In all honesty, I think it climbs better this way. So, emerging at the top, in the dark, in one day, brought a memorable five decades to a satisfying end.

The Gear of the Day

Apart from climbing gear our equipment was pretty basic. We had sleeping bags and hammocks and our food was canned sardines, salami and canned fruit. I think we had four or five litres of water each." 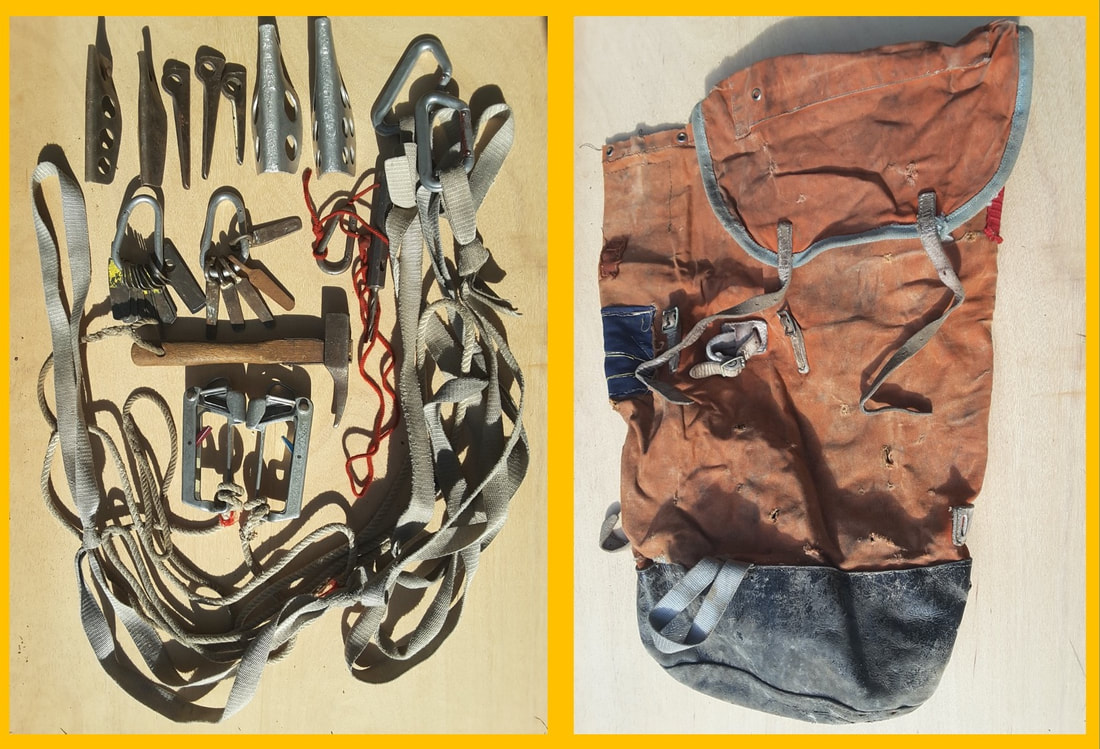 Photos of the gear used by Geoffrey Gledhill. The aiders were used on all of his first ascents.