COMMON CLIMBER
​Common Climber interviews Dario Piana, the President and CEO of Acopa Outdoors, Inc. This interview is part of Common Climber's small business Marketplace where we connect you with the owners and creators of climbing-related small businesses. Acopa's story is one of resilience and is highlighted in our special themed edition on "Overcoming Adversity." Read on to learn more about Acopa's unique story.

Acopa, which means "up" in the Aztec language Náhuatl, has a long and unique history - one of vision and survival. Acopa was originally founded in 1997 by two rock climbers (Ernesto Vazquez and Dario Piana) in Guadalajara, Mexico. Not only was Ernesto a climber, but he was making his own climbing shoes. The two friends decided to join together to share these shoes with the world.

In 2003 legendary climber John Bachar (JB) joined the team as an Acopa USA founding member and greatly influenced the underlying concept for Acopa climbing shoes - performance AND comfort. JB believed that a climbing shoe should conform to the feet and not the other way around. JB played a central role in designing, selecting materials for, and testing the shoes under rigorous conditions (difficult climbs, long climbing days, and a variety of rock types.)

In 2006, 2007, and 2009 Acopa was struck with three back-to-back tragedies. On August 13, 2006 JB and Acopa USA co-founder Steve Allan Karafa, Jr. and John Bachar (JB) were in a serious car accident. JB was in critical condition and Steve lost his life at the age of 40. Steve's death left Dario and JB as the two remaining co-founders of Acopa USA. Then in 2007, one of Acopa's star athletes and JB's good friend, was struck by a rogue wave and disappeared. The final blow happened in July 2009 when John Bachar fell to his death while free soling near Mammoth Lakes, California.

JB was not only Dario's business partner, they were the best of friends. The loss was too devastating and Acopa was closed in 2010.

Going back to the beginning. Why did you and Ernesto decide to make your own climbing shoes?
I was amazed that a fellow climber was making climbing shoes of such high quality. I thought that, if more people got a chance to try them, they could climb better too. So, in 1995, I proposed we partner up and go into business making climbing shoes. As climbers, we weren’t really willing to accept shoes that fit poorly, so we thought we could do something about it. We spent about a year and a half doing research and development. Then, in 1997, we launched Acopa in Mexico. ​​
Back in 2003 John Bachar joined your company and it expanded into the U.S. What shoe models were born when Bachar arrived and how did the shoe making process change for you all?
The first group of models we developed with John were the Aztec, Aurora, Chameleon, B3, Sidewinder, and Underdog.

Our product design and development processes changed significantly. There were many things John wanted to do and had been unable to do until then. As climbers, we understood what he was trying to do, and it inspired us. We happily took on every challenge until it was done. Having John as part of the team energized everyone and put us in high gear. It all became part of the Acopa culture over the years.
With the re-launch of Acopa, you have some of the original designs. Tell us about those original designs, what you kept and why?
Climbers had been asking us to bring back certain models for some time. We knew we could bring them up to date while keeping the features they knew and loved. So that’s what we set out to do with our 2020 line. The Aztec, JB, B3, Enzo, Chameleon, Legend and Merlin are all updated versions of our original designs. 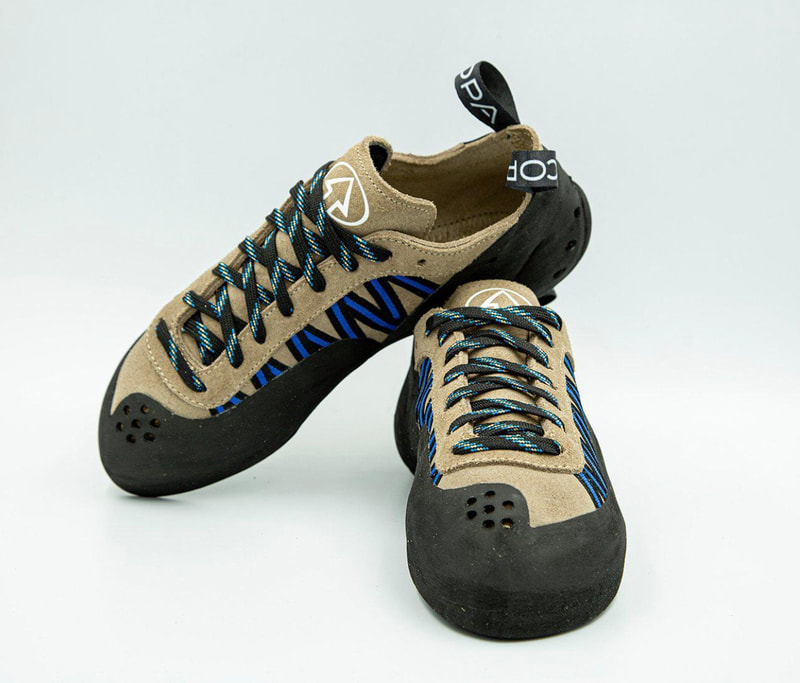 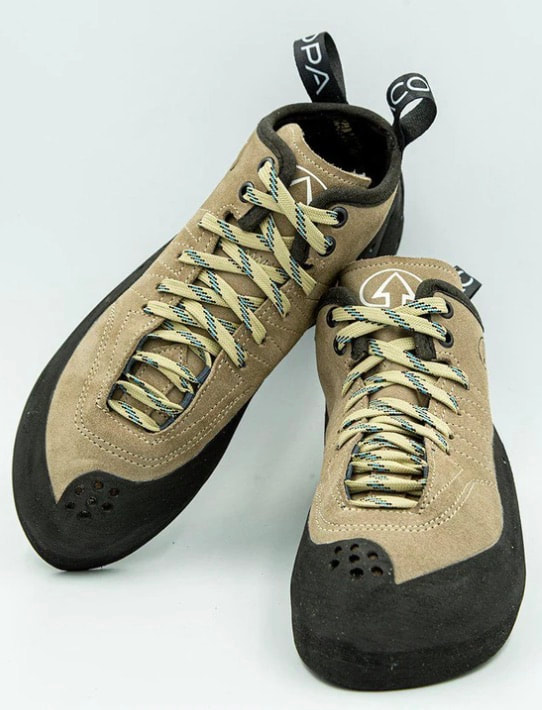 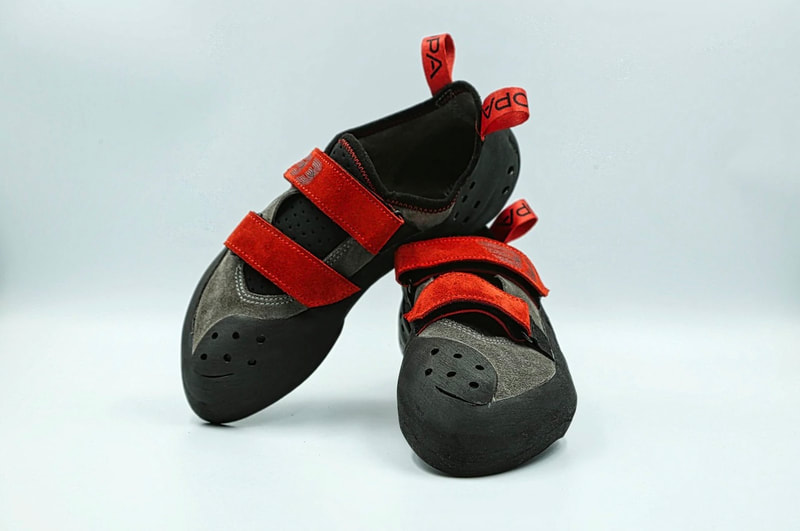 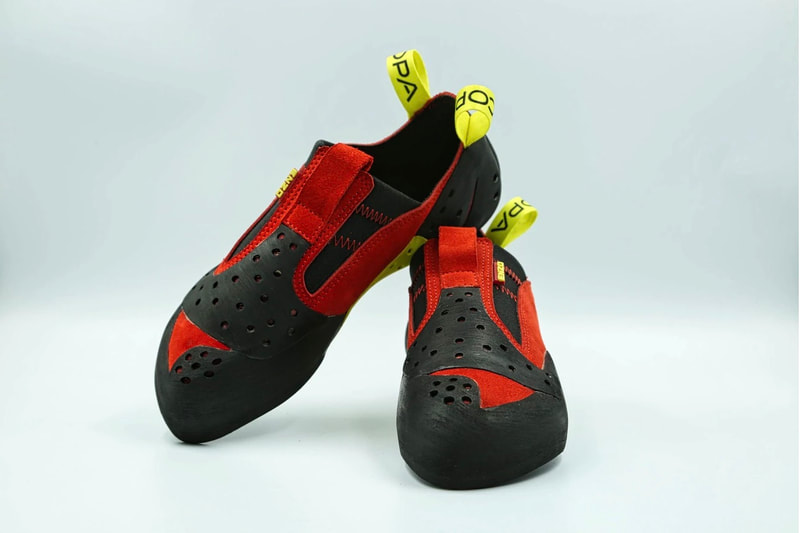 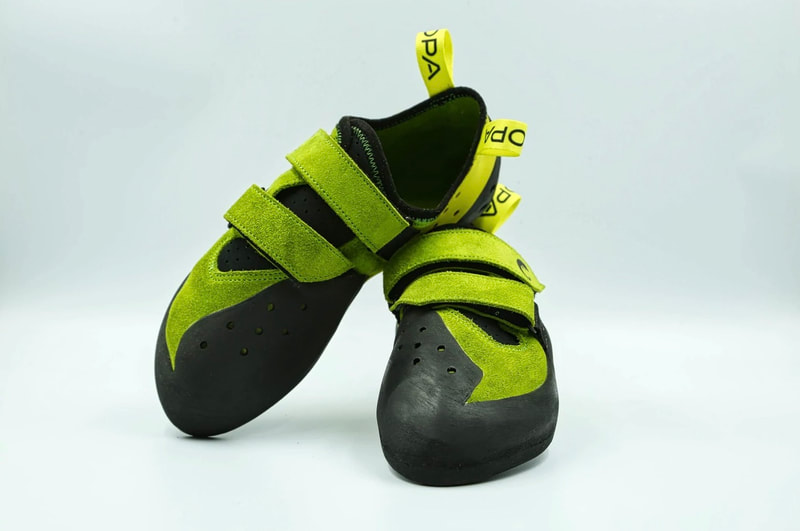 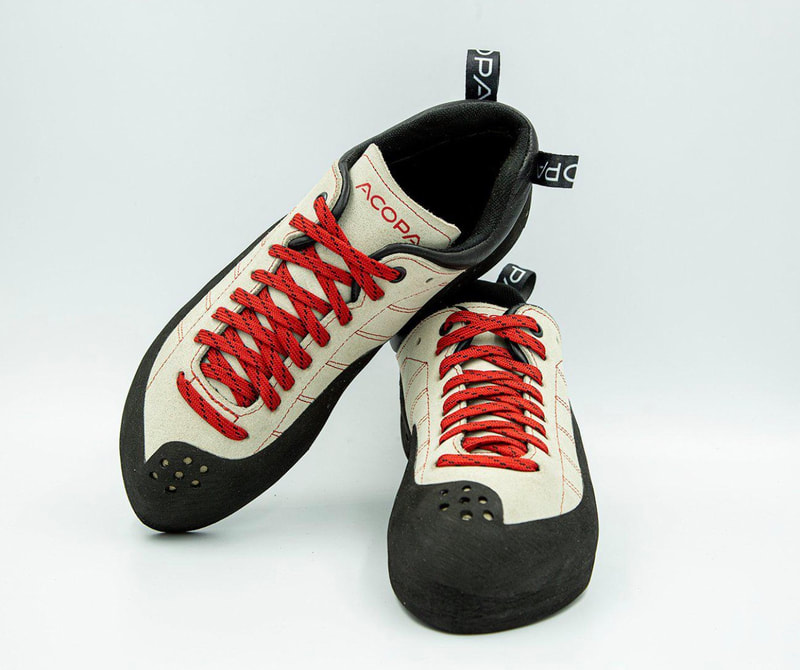 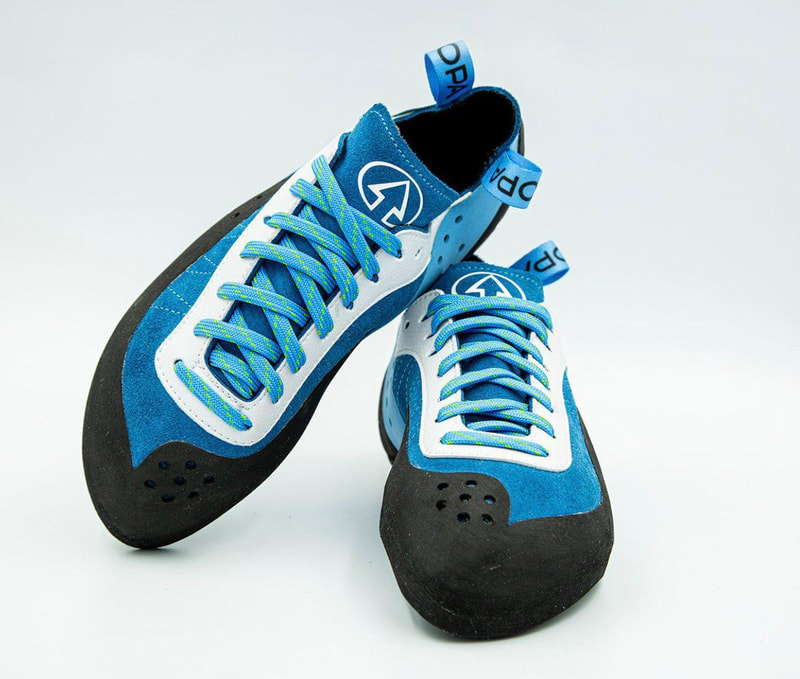 Hover over above photos to see captions. Click to take you to the Acopa website. All of the above models are made from leather and use the original Acopa RS Rubber, which is designed for sticking to the rock. 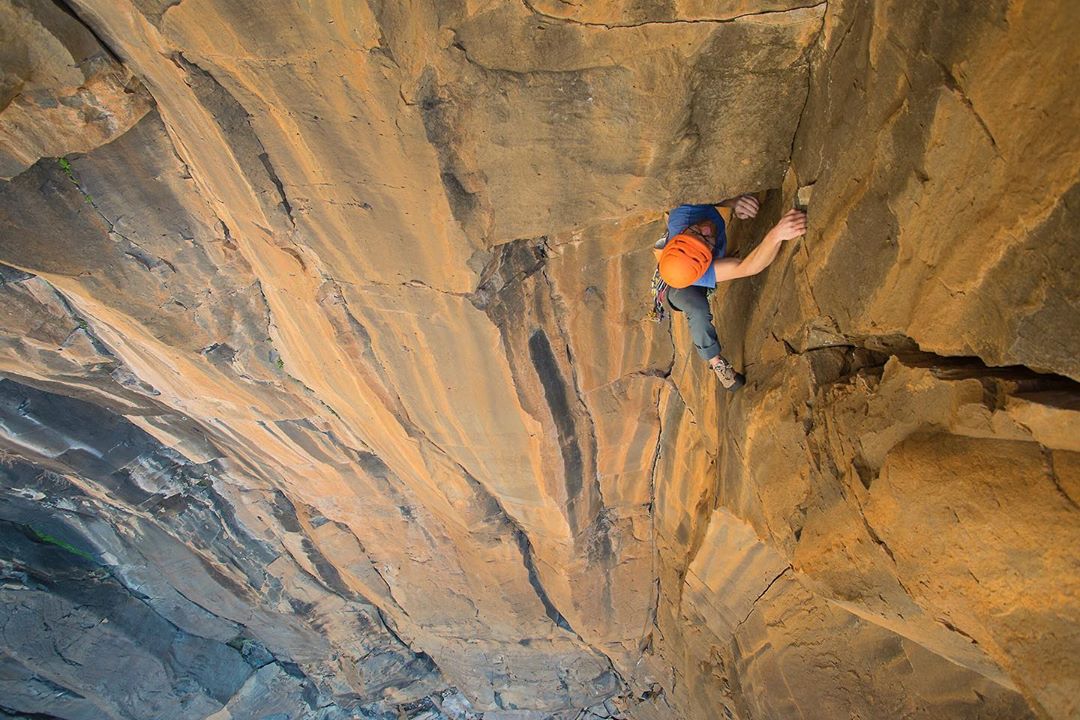 Chis Kalman climbing in Sedona, Arizona in the Acopa JB (Photo Credit: Rich Wheater)
How have you expanded your line of shoes and why?
Our line has grown to include models like the Shot, Fly and, most recently, the Gama. As climbing evolves, so do the needs and demands of climbers. New models are designed to respond to those evolving needs. 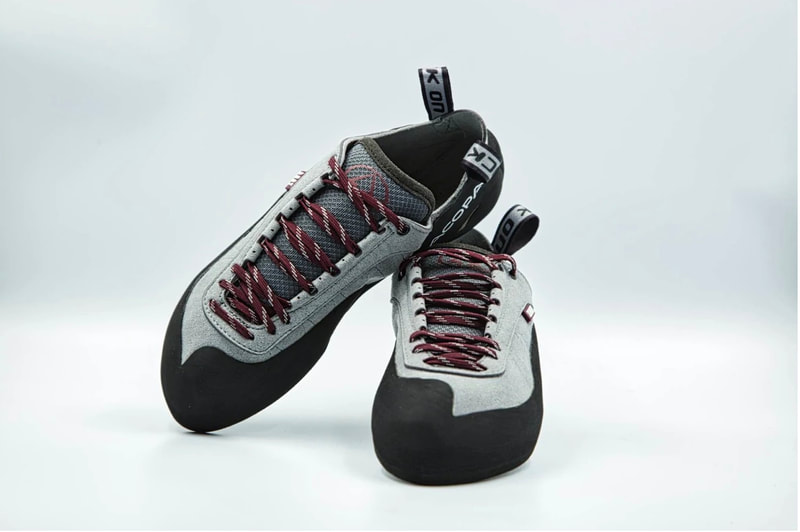 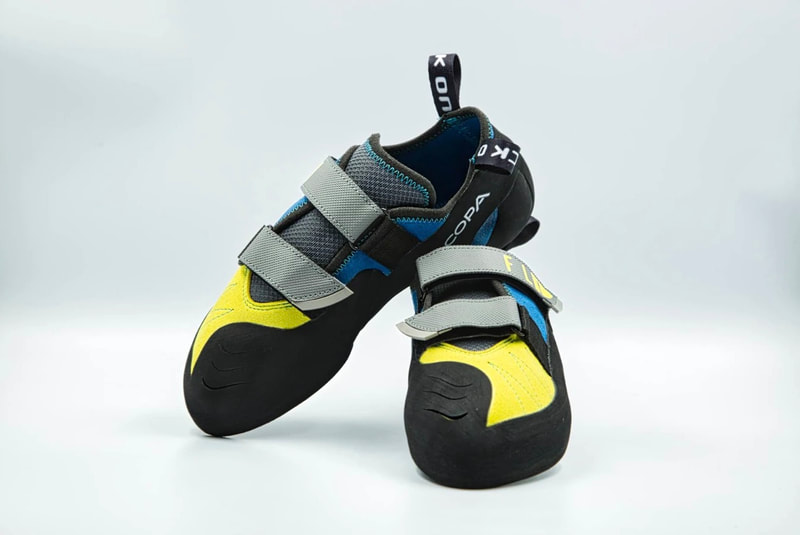 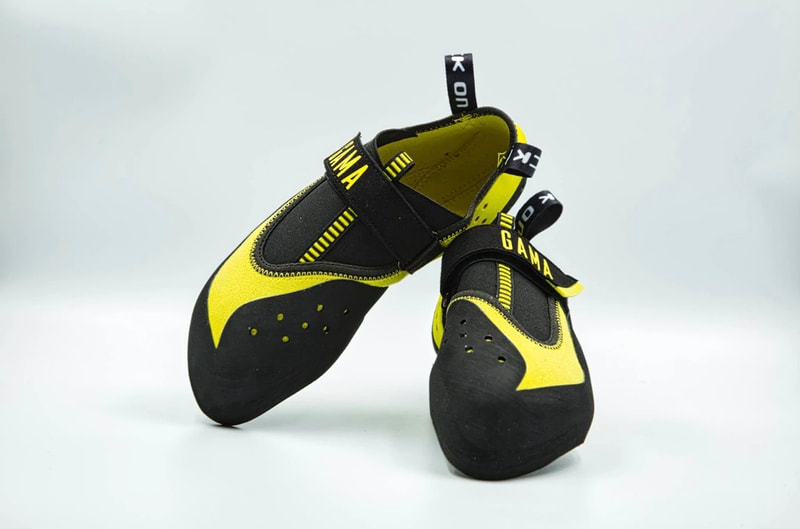 Hover over above photos to see captions. Click to take you to the Acopa website. All of the above models are made with synthetic uppers and the Acopa RS II rubber, which is designed to withstand the demands of the gym. 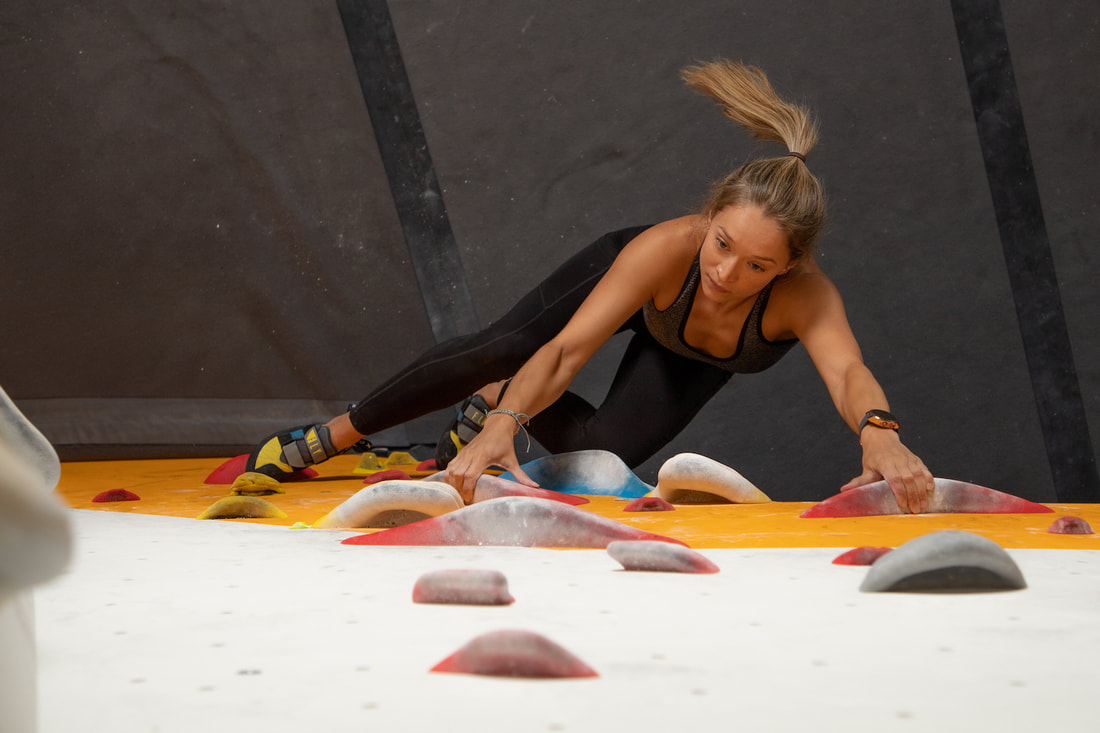 Bouldering in the Acopa Fly shoes. (Photo Credit: Diego Covarrubias)
Climbers have become so accustomed to associating "pain" with performance - especially aggressive shoes. How does your philosophy of comfort apply to more aggressive climbing shoes and how does it impact performance?
We believe you’ll climb better if your shoes are comfortable. Aggressive climbing shoes are no exception. Even high-performance shoes need not be painfully uncomfortable. Pain does not help your climbing.

The right shape for your foot will yield the highest performance and maximum comfort. People are often surprised to find that, once they find the right shape, they don’t have to upsize to be comfortable.
Where are your shoes manufactured today? Why did you choose that location?
Our shoes have always been manufactured in Guadalajara, Mexico. Guadalajara is a 400+ year old modern city that has long been a center of manufacturing. Talented and skilled artisans of all kinds have always lived in Guadalajara, and shoe manufacturing has always been part of the local economy. It’s also surrounded by great, year-round climbing areas.
I believe you all are the first climbing shoe company (that I am aware of) to offer customization. What does customization mean? What can people customize?
In the introduction to this interview we talk about Acopa's history, why you all shut down back in 2010, and that you restarted right before COVID hit. Starting a business is challenging enough, then add in the COVID lockdowns and supply chain problems, how did this impact Acopa?
Fortunately, we had launched in Mexico in 2018, so we had a good team in place and had gathered some momentum. Still, Covid hitting right after our U.S. launch in January 2020 certainly made it more challenging. We had to cancel dozens of demos all over the U.S. and many stores and gyms had to shut down for quite a while. However, the response we received from climbers, many of whom had pre-ordered their shoes even before we launched, was amazing. When Covid hit, we braced for a terrible year. But thanks to them, it turned out quite well and it’s only getting better. ​
How have your previous years in business helped you in today's relaunch of Acopa?
Tremendously. There is no substitute for experience. Additionally, although Acopa was never a huge brand, we found that many climbers and mountain shop owners remembered us and have a positive opinion of our brand. Altogether, the years we were in business previously have made a huge difference.

I should also mention that Ernesto and I were joined in 2018 by two new founding partners, Fredy Girón and Adrián Haro. Both are also climbers, and their experience has been priceless. We make a great team.
Now with the economy on the mend and people becoming more aware of your shoes, what are your plans and next steps?
We’re working on a few exciting projects. In 2022, we’ll be introducing a brand-new model, built on an entirely new last, the Vega. This will be a great model for bouldering and sport, indoors and out. We’ll keep developing our customization program. We’ve just added custom size options all the way up to size 20 US. At the opposite end of the spectrum, we’re also looking at designing a new version of our kids’ shoe, the Underdog. We’re always working on new ideas.

We’ll also be doing our Acopa Demo Tours for the third year in a row, bringing demos to locations all over the country so people can try on our shoes. This has been a very successful endeavor for us. We value and enjoy the chance to meet climbers and store owners, as well as to get out and climb.