Bliss: Climbing in the Blueys

​By Stefani Dawn ​​​
Epics, mini-epics, near-epics, and zones of craptitude make for good stories. They can be funny or illustrate, how, with perseverance, you can overcome. Or, those stories can be relatable because shit just happens to all of us.

But, most of the time things are pretty dang chill. Fun. Enjoyable. Cool. Sometimes there is even bliss.

Australia. The Blue Mountains (aka The Blueys). 1.5 hours outside of Sydney. Sandstone. Trad/Mixed/Sport. Multipitch.

THE place to climb in Australia.

All of those reasons are why we had to go there. I was hesitant, though, and nervous because, like many climbing areas, legends and stories graced the walls of the Blueys.


Weeks before leaving for Australia I scanned the Blue Mountains guidebook trying to find climbs and areas that might take it easy on us while we became familiar with the rock and grades. The grades were in the Australian system and, as I discovered, the conversions between it and the U.S.’s Yosemite decimal system were inconsistent, depending on which conversion chart you used. This added apprehension – what I think is a 5.10b might really be a 5.11a in the conversion, in addition to any sandbagging, the climb might actually be a 5.11d or 5.12a.

I decided to focus on easy climbs to provide adequate buffer.

Since we were traveling in Australia for several weeks, and doing multiple sports on the trip, we decided to bring minimal climbing gear - rope, harnesses, shoes, alpine draws, and four Omega Pacific Link Cams. Thus, I needed to find either all-bolted sport climbs or “mixed” bolt-and-trad climbs. Ideally I wanted to avoid “carroted” climbs.

I continued to add additional climbing criteria to the mix: the climbs needed to be multi-pitch with walk-in-only approaches (rather than rappelling), and the approaches couldn’t be too heinous.

As I applied the criteria, our options rapidly narrowed – too narrow. Surprisingly in a location with thousands of climbs, I was now having difficulty finding where to go. I was shutting us out of the true Bluey experience. Frustrated, I decided to hold off on identifying areas to climb until we arrived.

The Blue Mountains are different from mountains in the United States. In the U.S. we drive to the base of the mountain, our towns are at the base, we park at the base, and we begin our approaches at the base. In the Blue Mountains, however, the world drops down. Towns and roads are high on the mountain’s plateaus while the climbing is below on steep massive walls that support those plateaus. Thus, there is often the need to rappel to get to the start of many climbs. 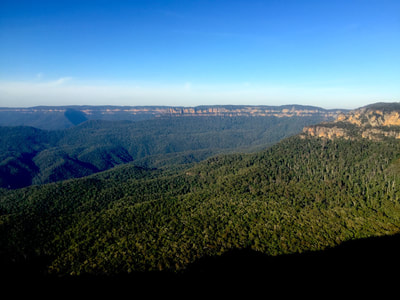 I remembered falling in love with the Blue Mountains when I visited years ago as a non-climbing teenager. I wondered how accurate those vague, misty memories were, or, if the infatuation would still hold true. It took no time to reignite and strengthen the Bluey’s grip on my heart.

Invigorated by the call of the stone, we revisited our climbing criteria. We realized we had to loosen the restrictions while keeping several key requirements. Since we didn’t have a full set of trad gear, the climb had to be mixed or fully bolted. Multi-pitch was a personal must. And, until we became familiar with the area, we didn’t want to commit to a rap-in approach. The rest we needed to “give on:” go up to AU17 (approximately 5.10b); allow for a heinous walk-in approach; allow for carrots.

We found a 5-pitch, mixed, 5.10b, with carrots and an approach that apparently had “steep slick exposure,” a “hole” you had to crawl through, knotted ropes for down climbing, and a “cable of death traverse.”

If I read that description in the Red Rock Canyon, Nevada guidebook, I’d run like hell. It would practically be a death trap. Because of my previous quite terrifying experiences with approaches in the U.S. I almost backed out.  But, we flew this far and I had to climb, so I gave it a try. Much to my glee, the approach was an absolute blast! Really! It was like a via ferrata fun-fest. We discovered that the Blue Mountain climber’s trails are incredibly developed and well protected.

Once down at the base of the cliff, we walked past several huge walls on the way to our climb. I touched the rock, visually studied the rock, and became giddy with excitement – it was fucking beautiful. 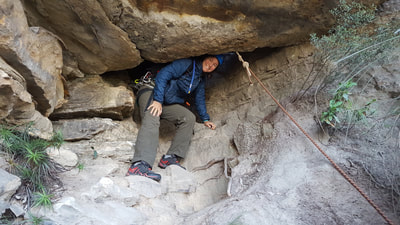 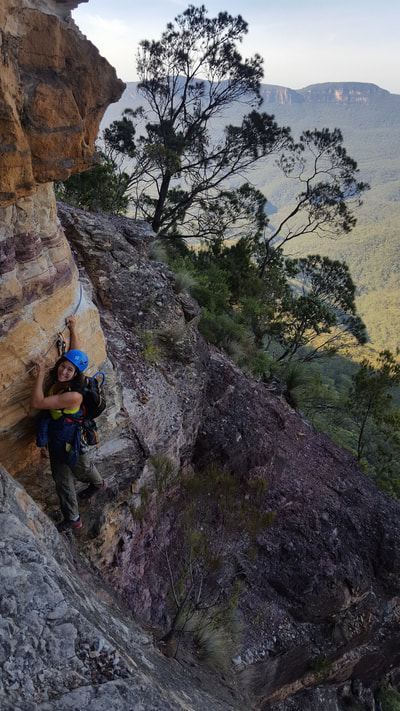 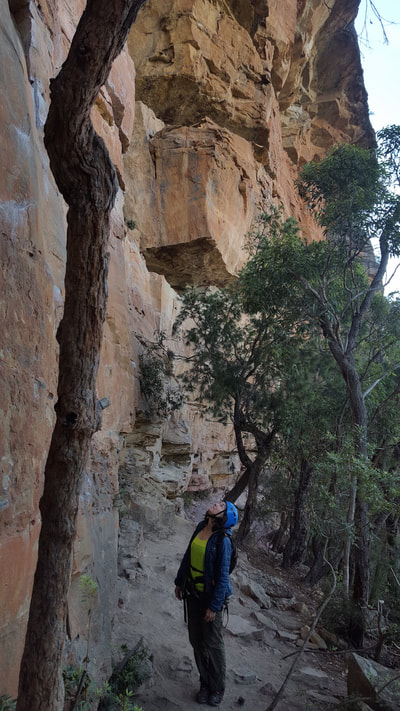 And, our climb was no exception. In fact, this climb (called Sweet Nightmare) was nothing short of my absolute favorite multi-pitch EVER. It had everything: Pitch 1 easy blocky fun; Pitch 2 ledges, cracks, and flakes; Pitch 3 easy traverse; Pitch 4 juggy overhang; Pitch 5 small roof finish. Brilliant. Brilliant. Brilliant.

Then, when all was said and done, after you pulled over the top of the cliff pumped and exhausted, the icing on the cake was handed to you. The walk to the car was easy and short. No long heinous exposed scree-filled descents from the top of a mountain. The car was right there, practically in front of us! Fuck yeah! Double fuck yeah!

I am still blown away.

In fact, I am infatuated. In love. Never have I experienced rock climbing so utterly satisfying (and I have climbed a lot in many different, awesome places!)

Although it is clear I need to return to the Blueys for an extended period of time, what I experienced there was incredibly fortunate. Who knows if subsequent visits will deliver that prime level of experience. But I am at peace with that notion, I am grateful for having experienced true bliss.

Photos of Sweet Nightmare (scroll down to Sublime Point) and other climbs in the Blueys. 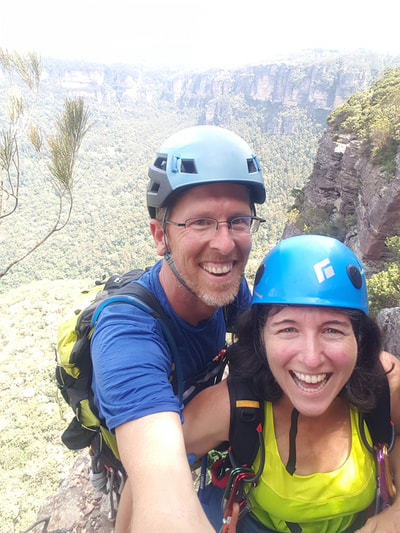