Book By Lyle Closs
Review By Keith Bell
​Many a young climber owes their prowess or at least their "stoke" to mentors and it is pleasing that Lyle, right from the start, names Bob Bull, Reg Williams, and Peter Jackson as the “few people who are important to me." Although I have not met any of these climbers, their names, deeds and prodigious talents are widely known and respected. Don Holmes’ name is also included as important, though his climbing ended too early, taken by cancer.

Lyle mentions the powerful Eurydice and the bold Missing Link - timeless, classic climbs at Mount Arapiles in Victoria, Australia. The early ascents of these Arapilean benchmarks are sufficient testament to the aura associated with his mentors’ names: Bull, Williams, and Jackson - “Gods of a Victorian climbing dawn."
It’s a cold chilly day in Hobart in 1973; Lyle’s door bursts open and Ian Lewis storms in: “Get your arse out. Come on, it’s time we did that f’ing climb."  And soon they are trooping along a track under the Organ Pipes high above Hobart on their way to “a narrow spear of shadow – 100 metres straight up” Lyle grudgingly leads the first pitch leaving Ian to tackle the next steep off-width section. The sun peeps through as Lyle leads the third and last pitch.

​“Out on the face of the world with moves hard enough to work the mind and the muscles to a slow tilt of movement that takes the spirit closer to the soul."

As Lyle leaned out to watch Ian climb, two crows skimmed by the crag below them. “Hey Lew – two black birds." While Lew followed their flight Lyle shouted down, “Three black birds is bad luck, isn’t it?” On cue a third black bird sails past. “Third Bird!” And as luck would have it the name stuck. “Third Bird” (Pages 40-43): Interestingly, while climbing with Bruce Cameron at the end of my train trip he mentions that Third Bird (18/5.10a) was his all-time favourite route in Tasmania.
Tasmania is not the only place described in Climbing Glass; there are cameos of Lindfield (Sydney), Blue Mountains (NSW), Frenchmans Cap (Tasmania), as well as overseas areas, such as the Roaches in Derbyshire, United Kingdom, Greenland and Antarctica. North Head, the sandstone sentinel at the entrance to Sydney Harbour, is also featured in an article that, cryptically, you will never "tyre" of having a laugh at. However, you will need to "Claw" your way through a "Climbing Story" (Pages 33-39) to get some traction on this one...

Then there is the article on the “endless outrageousness” of eighteen pitches up the crumbling conglomerate of the Red Rocks Ridge in Greenland. “Blooming red waves of crumbling geology … that crowned us silly little men who went out one day to climb." (Story: If there was a yesterday it is this instant. Pages 84-88) 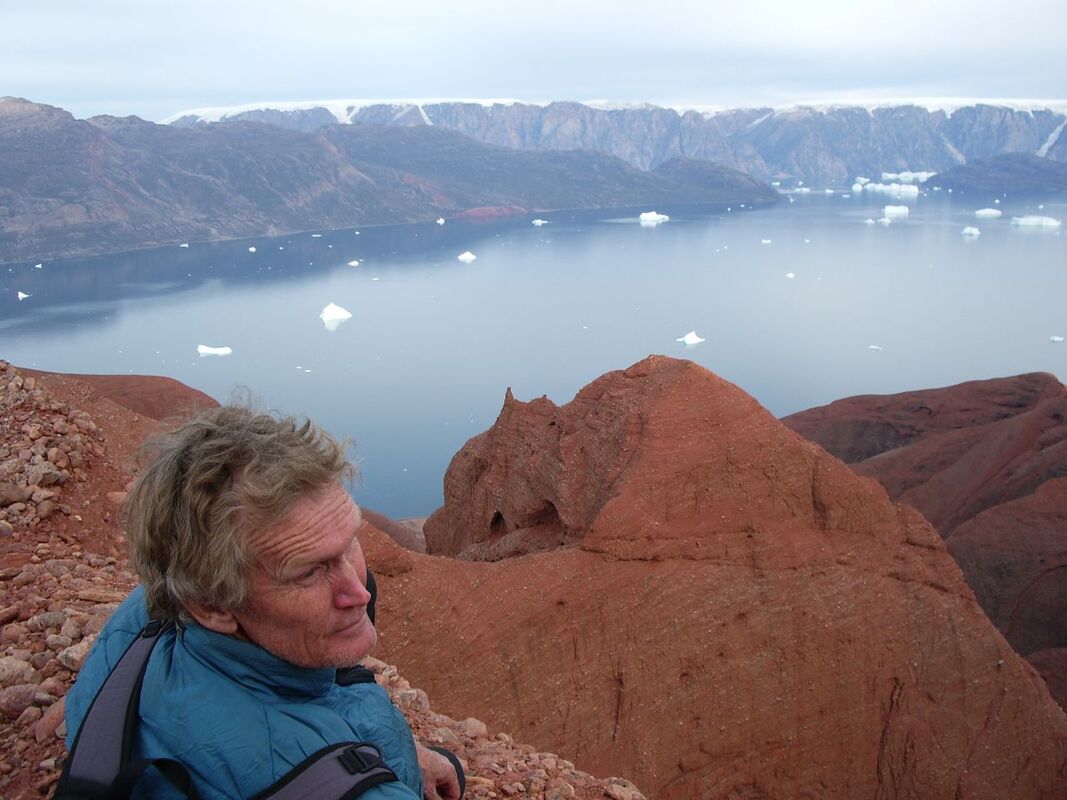 “Blooming red waves of crumbling geology … that crowned us silly little men who went out one day to climb." Greg Mortimer on pitch 15 of 18 of Red Rocks Ridge in Greenland (Photo credit: Lyle Closs)
Although you know he survived, I found myself hanging onto the book with tight and sweaty fingertips. Likewise, in the Blue Mountains, Tom (Williams) on belay above “watches helplessly, wide eyed with distant fear … Fuckin hell Lyle!” This is a brilliant piece of writing that all climbers should read. Quite often our decisions walk a fine line between survival or demise, or at the very least serious injury. Epics are part and parcel of climbing if you climb long enough, they are what is often clearly remembered, and hopefully more importantly, learnt from.

​Lyle states from the outset that his writing: “Does not include gushing descriptions of routes, holds and comradeship.” All I can say two out of three ain’t bad! Routes with the associated cameradie are associated with every chapter while hold-by-hold descriptions are thankfully minimised. I so enjoyed Lyle’s multilayered and textured prose that dances with deep thoughts, actions, humour, climbing and insights taking the reader into the many facets and corners of a life however dark or light. The actual climbing might be compelling, all consuming and of great importance but after five decades it is the characters that you have shared this with that are paramount in your memories. This book is testament to this. Lyle finishes his work with the line: “Sometimes things just work out OK.”

I reckon that you have done better than that, my friend.
You can find the book Climbing Glass: Climbing Articles From Five Decades" and other books by Lyle Closs at: https://www.lylecloss.com/climbing.html​
Author (Keith Bell) acknowledgements: A special thanks to Stephane Pennequin of the Nuts Museum Corsica, for allowing me to use his excellent images of climbing gear. My thanks also to Stefan Karpiniec and Phil Robinson for sending, and allowing me to use their photos of Tasmanian climbing.