Climbing in the Bare Essentials

The First Naked Ascent of the Standard Route on Whitehorse in New Hampshire
​By Stewart M. Green
In 1978, Jimmie Dunn, then running the Eastern Mountain Sports climbing school in North Conway in northern New Hampshire, was married to Martha Morris, who also worked as a summer rock guide. The pair, after an in-the-raw bouldering session at Rumney Pound, decided to up the ante and do some birthday-suit ascents of local classics.

“Everyone talked about doing nude ascents, but nobody did,” recalls Martha. “Jim and I were the only ones. It was only fun if a guy had a woman to do it with, and most of them around North Conway didn’t have girl friends that climbed.”

The pair decided their first nude ascent would be the Standard Route on Whitehorse Ledges, a long, moderate line up an immaculate 800-foot-high slab that towers over the Mount Washington Valley.

“We thought, why don’t we do Whitehorse?” said Martha. “We hatched the idea the night before in our cabin, a sixty-dollar-a-month log cabin on West Side Road. We drove over to the trailhead in the dark and started climbing at 5:30 in the morning with just our shoes, I think they were EBs, and our harnesses and a rope. We didn’t wear helmets. We stashed our clothes behind some boulders at the bottom of the route. I don’t know why we didn’t think about needing clothes to walk down in. We were so intent on getting up and having the first nude ascent of Whitehorse Ledges that we forgot something important like that.”

“We climbed fast, alternating leads, and it just felt good cause it was a warm sunny summer morning. It was in late July, nice weather, really warm. The air felt really good. We sure as heck didn’t want to fall with no clothes on. That would leave some very uncomfortable abrasions. We got to the top and looked down and could see people starting up the slab.

“From the top we had to walk down the descent trail and dodge people climbing on the slab next to the trail and others hiking up. We must have looked hilarious—these two naked people in the woods. I don’t know if anyone saw us though. At the base we had to hide behind boulders and sneak between trees and then dash over to grab our clothes. We ran like hell for the clothes and then we went to The Big Pickle for breakfast.
​
“We even took pictures, so we had proof that we did it. But I didn’t take any photos of Jim because he had the camera so he took pictures of me. But that ended up being the only nude ascent we did. We thought about doing more, but we didn’t. Nobody else did it either.” 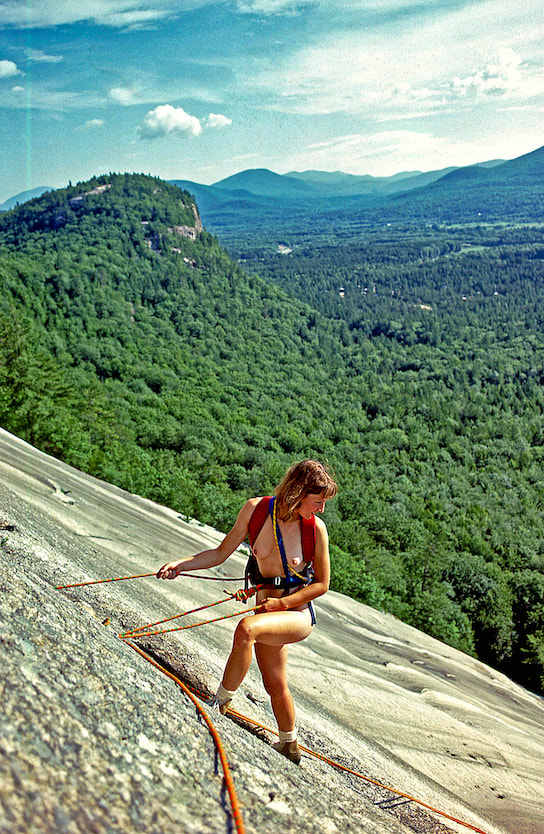