Climbing Photographer Daga Dygas - Interview and photos (below) ​
Additional Contributions to Common Climber:
Hey Daga! Thank you so much for sharing your climbing photography with our Common Climber readers! We love the photos and we enjoy getting to know the person behind the lens.

You currently live in England. What brought you there are where are you from originally?

​I’m originally from Poland. I first came to England to do my degree in film production. I was also looking forward to tasting some more of English culture as I’ve been in love with it since I started learning the language. Climbing had to be there, too - wherever I am, there has to be climbing. 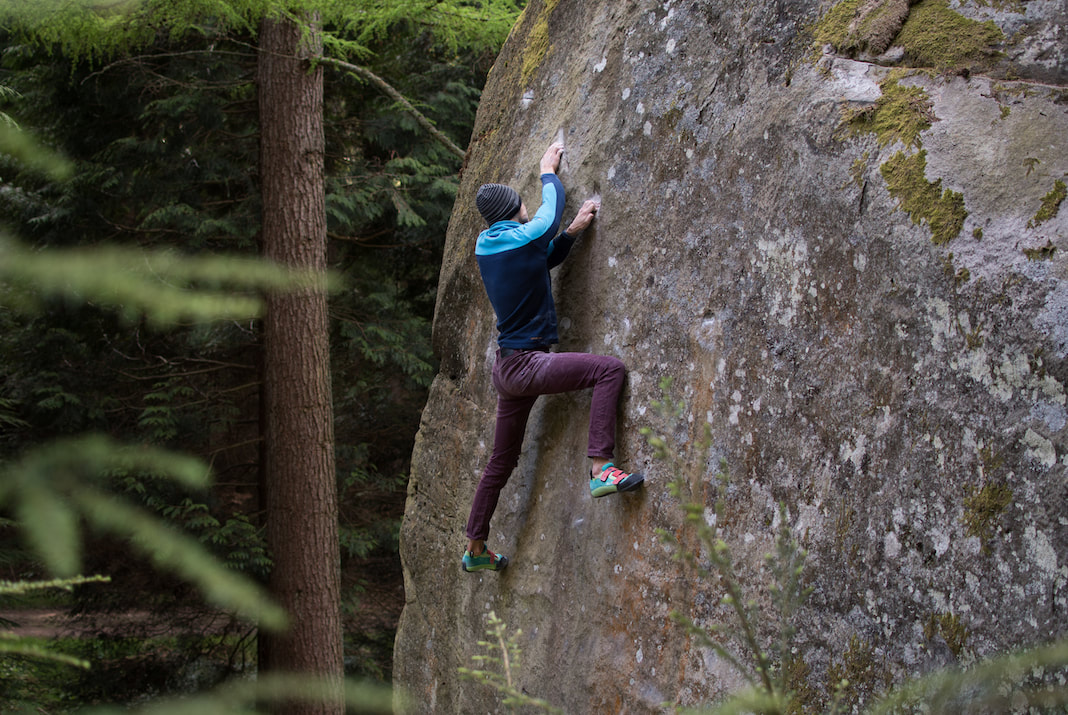 Kyloe in the Woods, Northumberland, UK. @flaggingflapper climbing Nadser.
Tell us about your climbing. (How long, what type(s) – bouldering, sport, trad). Do you climb the infamous gritstone there in England?

​I’ve been climbing for about 10 years. I started with sport climbing and I did mainly that until I met my fiancé. There was a time when my partner and I only bouldered, but that time has passed now. I have gone back into sport climbing, trad, an occasional easy solo. I don't really treat climbs differently because of the type of climbing they are. What attracts me to a climb is the movement, what I can learn from it, and how it can challenge me. It's always on rock, though. I've climbed some ice but I wouldn't call myself an ice climber. I see less appeal in it than in rock.

Funnily enough, we mainly climb on sandstone in Northumberland. Of course we've tried grit, and we have returned a few times to try again, but it's never been a great success of a trip. Pretty much each time we've gone climbing on grit, it poured down. 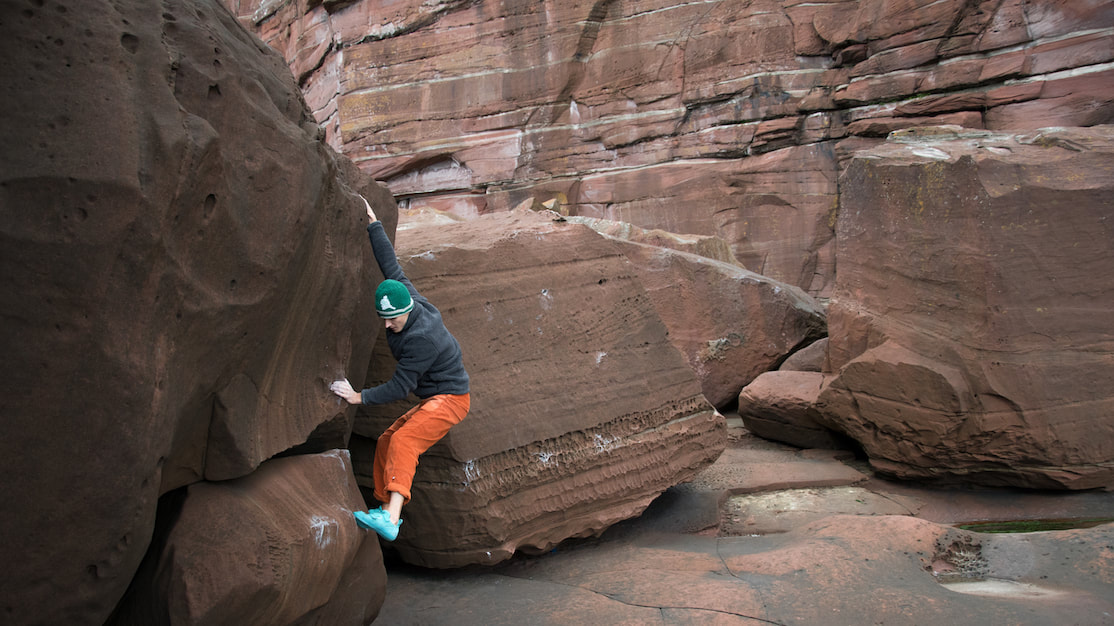 Red sandstone by the sea. @flaggingflapper on a very aesthetic easy boulder in beautiful St. Bees, Lake District, UK.
Are most of your climbing photos in England?

​A lot of them are. A large portion was also taken in Fontainebleau, which is a compulsory place for me and my partner to visit at least once every year. I never go on a trip without a camera, so I bring some photos from each holiday we go on. But, because we climb in Northumberland and Font most regularly, I’ve got loads of photos from these places. 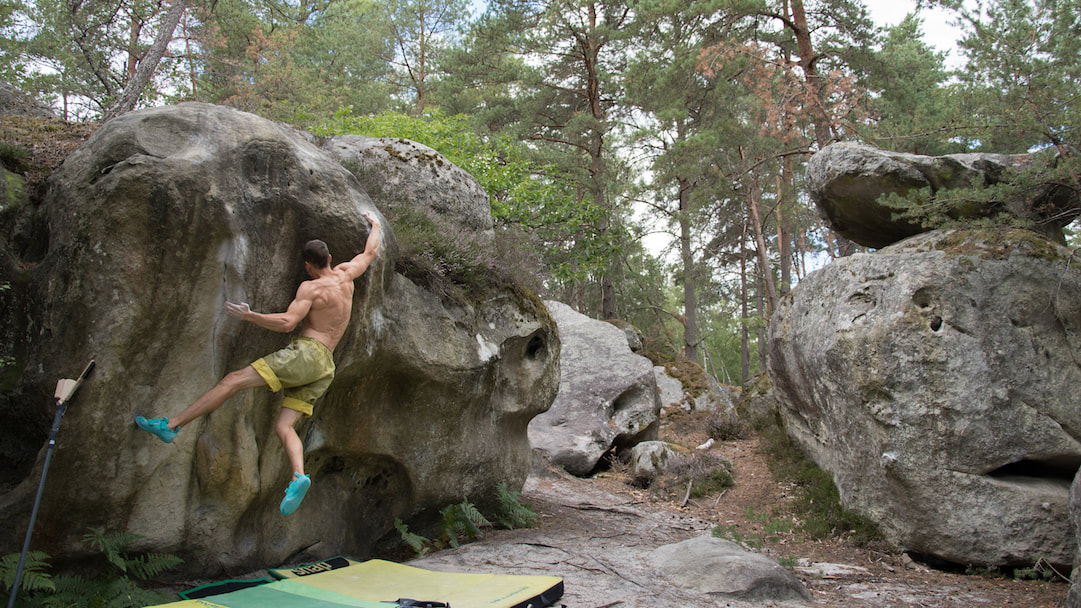 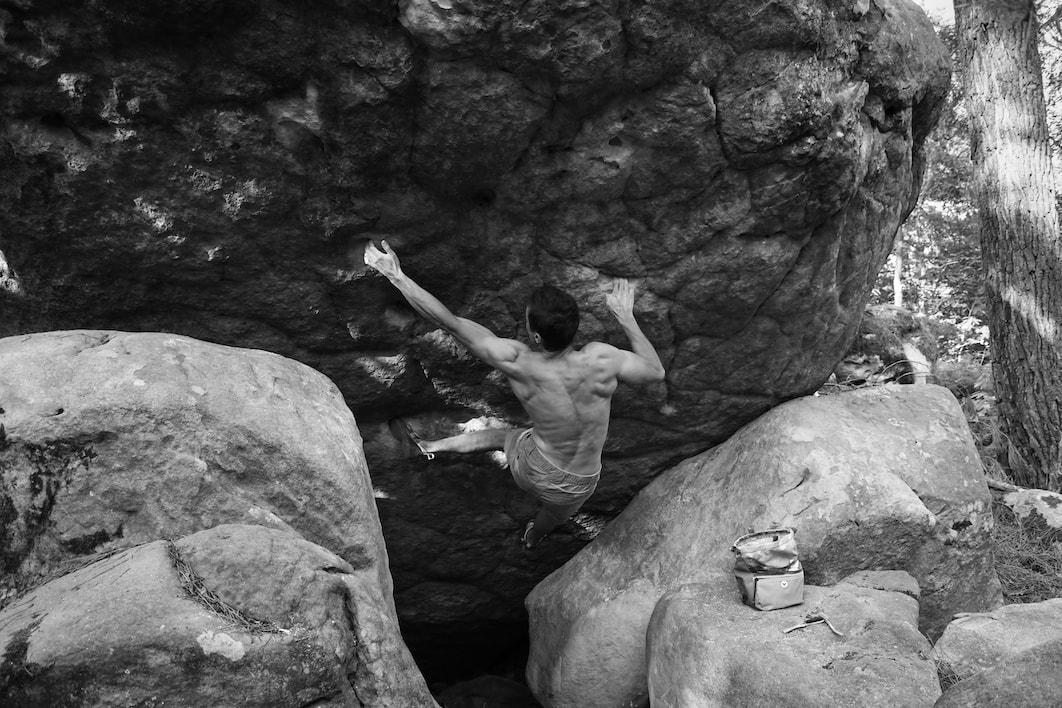 The exact move you shouldn’t do with an injured spine. @flaggingflapper in Fontainebleau, France.
​You do a mix of climbing photos (roped, ice), but many of them are of bouldering. Tell us more about your choice of photographic content and the use of black and white photos.
​
My choice of photographic content is often centered on interesting climbs and people - similarly with film as well. Other photos, especially on a normal day out climbing, may be inspired by the light we happen to hit or aesthetics of a particular move. I really like shooting on ice.

One of the reasons for such strong dominance of bouldering in my portfolio is the fact that for many years my partner and I had been doing minimal amounts of other types of climbing. Although we’re back to climbing with a rope much more now, a lot of our trips are just as a couple, so I’ve got to belay instead of shooting - there's no choice in this not being my photographic content, necessity dictates the way.
​
I love black and white images. I think the choice between colour and black and white is very important to how the photo is later perceived. Editing your photo in black and white won't always give you what you want - but it often does for me. The light does have to be right for me to do it though. Recently, I've been a bit more open to colour again, probably a side effect of getting into colour grading in film. 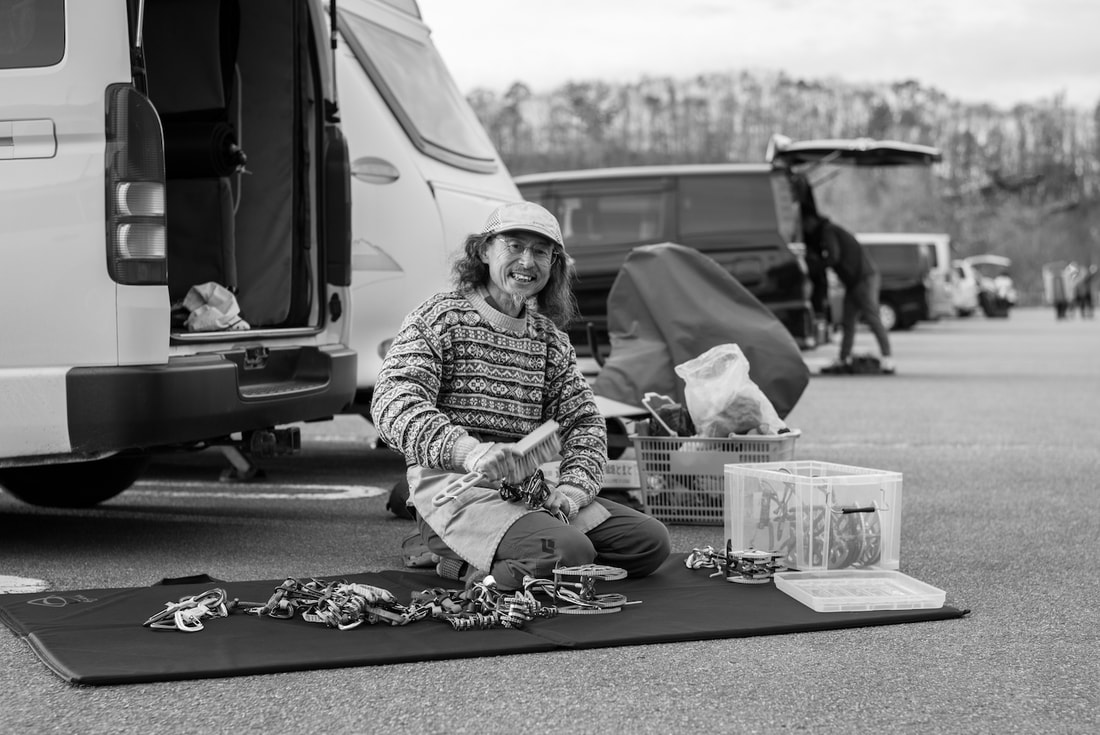 Cleaning the kit after a good day climbing. This man lived in his caravan for at least a week, while climbing every day on the beautiful granite of Mt. Mizugaki. Yamanashi Prefecture, Japan.
​Tell us about your background with photography. How did you learn? Do you have favorite equipment?

​I started snapping photos as a child, not that I knew anything about it, I just enjoyed it. I must have been about 13 when I got my first DSLR. I went through periods of snapping away at everything around me, and through times of taking next to no photos as I thought I wasn’t any good. I never put a camera down, though, without the intention to pick it up again at some point. At this moment, I don’t think I could stop shooting. I learned most things by practice, although my apprenticeship at a studio with two artists-turned-commercial photographers helped, as well as all the freedom I was given to take photos when I was at college. I never had a photography mentor.

My only official media-related education is in film production, which is what I have studied here, in England.
​
I shoot on Nikon cameras and lenses, and I wouldn't change my kit for anything. I can use anything, but that's my equipment of choice. 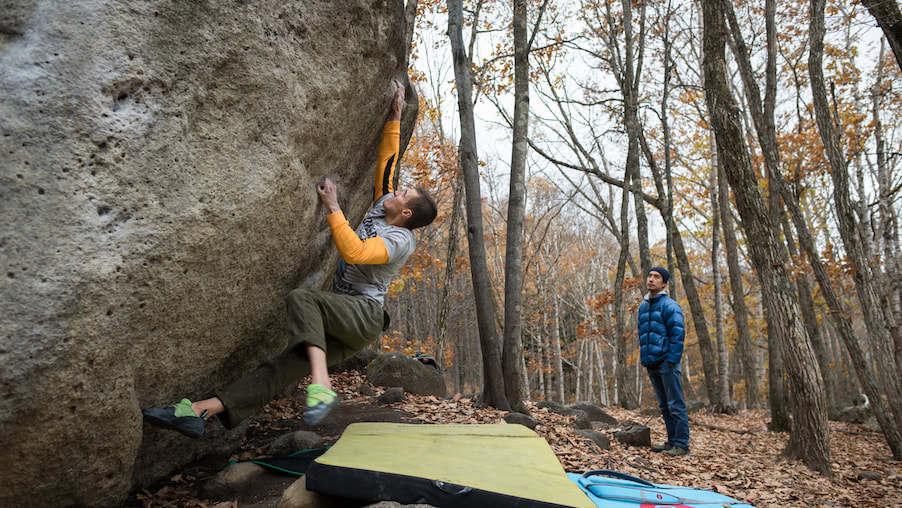 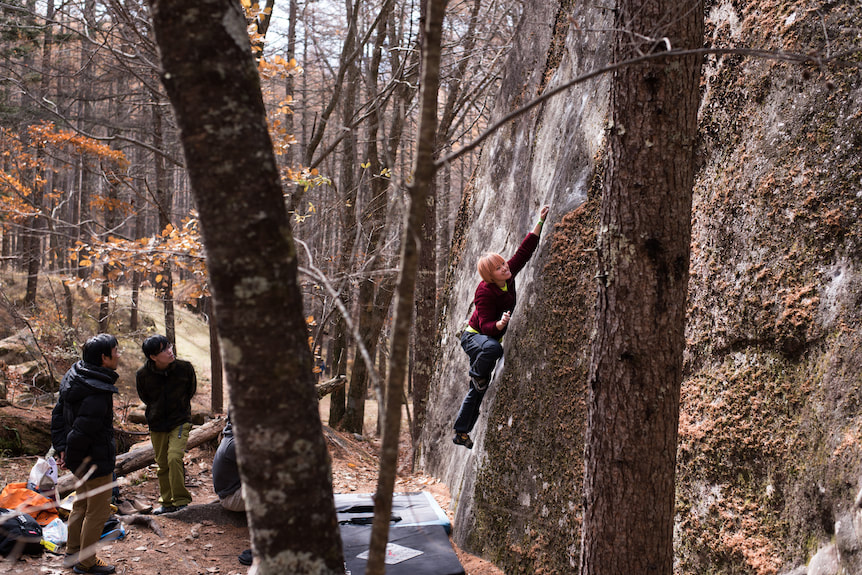 Smiling through attempts on this tall slab. Autumn colours. Mt. Mizugaki, Japan.
Do you have a tip for photographing climbers?

It's hard to give one tip for photographing any subject. It's a very vast field, and as in any art form, it's about your style and creativity.
The best advice I can give is to know your subject. If you climb yourself, the moves will make sense, and you will be more likely to be able to think in unison with the climber you've got on rock or on a wall, in front of the lens.
You are holding down three jobs to pay the bills and/or to fulfill the passions. What are those jobs and how do they connect with climbing and/or photography?

We all have to pay the bills. Another reason for me to have three jobs is my character, it doesn't get boring that way. These jobs let me follow my passions, or develop professionally, and each links to what I like. I work in camera product training and sales, as a climbing coach and as a languages technician at a university. These three areas: climbing, photography and film, as well as languages are more or less what my life revolves around - all with my partner. 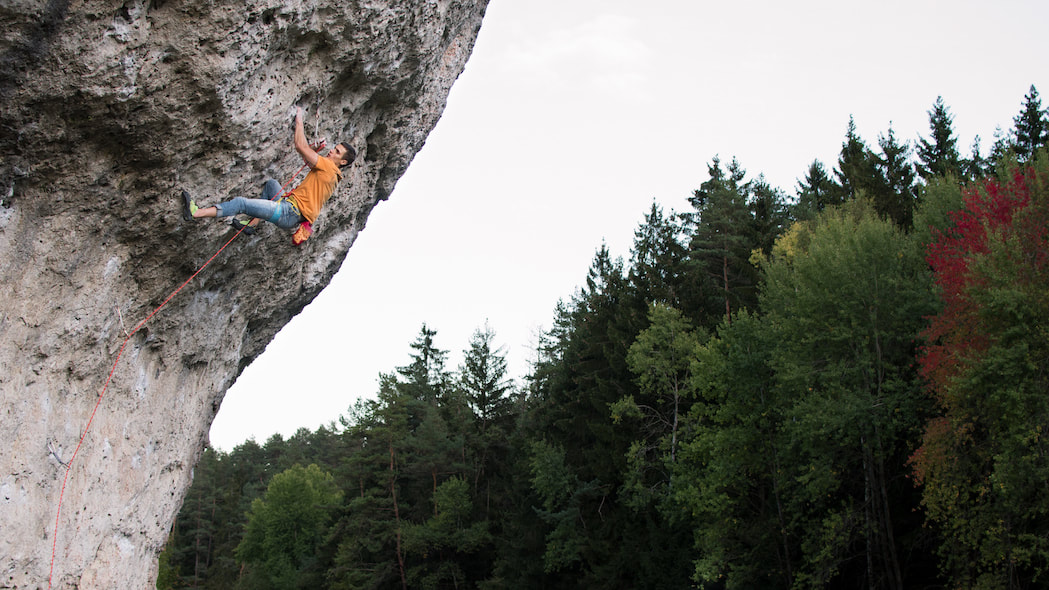 @flaggingflapper concentrating on that clip at Weissenstein, Frankenjura, Germany.
What else would you like the Common Climber audience to know?
​
Another of my interests lies in the world of languages and different cultures. I have worked as a translator in the past, and I’m open to doing it in the future.