By Hugh Ward
I went climbing with Hugh Sutherland last winter. It is shocking how few people are willing to head into the never never, away from the well trafficked and bolted routine of their local crag, away from a warm bed, cold beer, and running water. It's shocking how few people are happy to spend a day getting to the base of an unknown scrubby hill that needs to thrashed up before starting to look for a theoretical "classic line." Strangely enough Hugh is one of the few. Not only will he do it, he'll do it with a heavy pack and a spring in his step. No wonder he is on my speed dial list!

We had been planning to head out for Yonks, and had an eye on a corner system to the right of Big Glassy Corner, located in the magnificent Wolgan Valley (a few hours West of Sydney, Australia). One day, Hugh was having a chat with Adam Darragh and it turned out that Adam has already climbed it. Time for a new objective. You see, we were seeking a first ascent, something no one else has done before. We decided on Wonga Mountain (still in the mighty Wolgan - just a little more remote.)

Wonga Mountain in the Wolgan Valley west of Sydney, Australia
On the journey out to Wolgan, Hugh and I were having a bit of a laugh about how many of the lines that we look at turn out to have been climbed already – many times by Adam.

We rode out to the junction of Rocky Creek and the Wolgan River on Tuesday afternoon. We got into the camp a bit after dark, ate, did some gear sorting for our start the next morning, then hit the sack. I wouldn't say it was warm exactly, but it seldom snows in these parts, so we had little to complain about.

Wednesday morning we stashed our bikes in the scrub filled our bottles and water bladders from Rocky Creek (the upstream section is an extremely popular commercially guided canyon) and slogged up to the base of Wonga Mountain. ​
​We had a bit of a view of the cliff line on the walk up and compared this to the route descriptions of the existing routes at the crag. At the same time we spotted our line: a crack system running the length of the cliff, not at the highest part of the cliff, but it topped out and looked perfect for the time we had. We worked our way towards the crack while hydrating on the diluted urine of a thousand upstream canyoneers on the way.

We got the base of our line and it looked like a beauty. I won the scissors paper rock and got myself into my gear to start climbing. I had to fight my way through some desperate looking face holds and through a band of ferns to get established in one of the best looking cracks I have seen in quite some time.

Alas, this took a couple of attempts and I was pretty wound up and covered in dirt by the time I got to the base of the chimney above. ​ 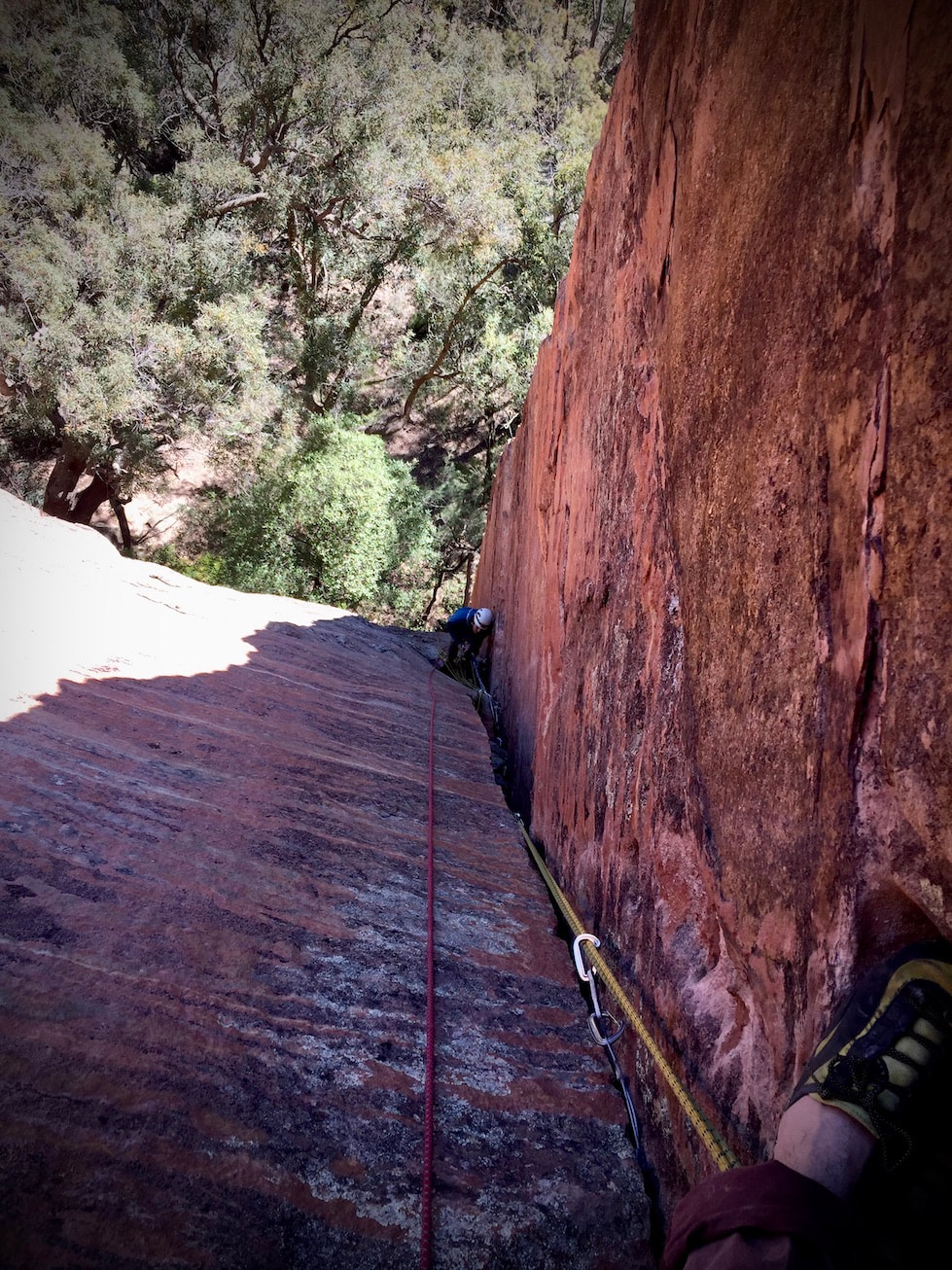 Pitch 1
​Hugh got up to the belay and we decided we'd lead in blocks, so off I shot up another pitch of fantastic climbing. After the chimney there was a steep crack (how I would imagine the climb “The Knuckle” on would be like on 'roids) and I swore and shook my way through this to a broken up belay ledge where I handed the sharp end over to Hugh.

Off he goes, up an easy corner system with a couple of roofs. Fantastic climbing with a slightly desperate move onto the next belay ledge.

His next pitch looked easy - from the bottom. However, it turned out to be nails, one of the most awkward moves I've come across followed by a bottomed out ironstone seam with awkward gear and committing climbing got us to the halfway ledge. Hugh cruised through in fine style.

We swapped leads again at the ledge, and it was my turn to keep us moving. Through some ordinary looking rock, past a chimney, and into yet another pitch of immaculate crack climbing. On a first ascent way out the back of nowhere, surely this is unheard of?

Last pitch, and Hugh is plugging his way up some more beautiful climbing in a broken corner to the sting in the tails of this little beauty.

We topped out in the last of the golden daylight, both pretty knackered, but frothing at the gills like hooked fish. Given the joke about Adam's prolific climbing in the area, and our need to find a line he hadn't done, we decided we'd call the route "Darragh's Done It," then turned our attention to the descent. 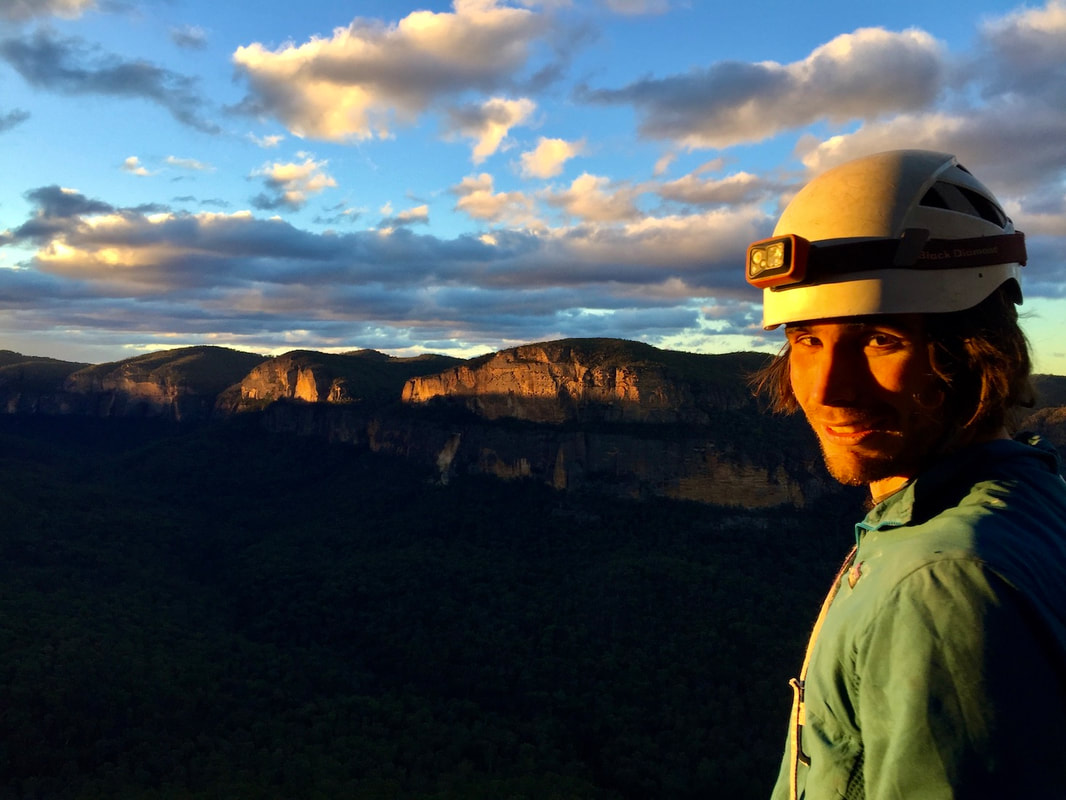 Hugh Sutherland before the descent as the sun is setting. Photo Credit: Hugh Ward 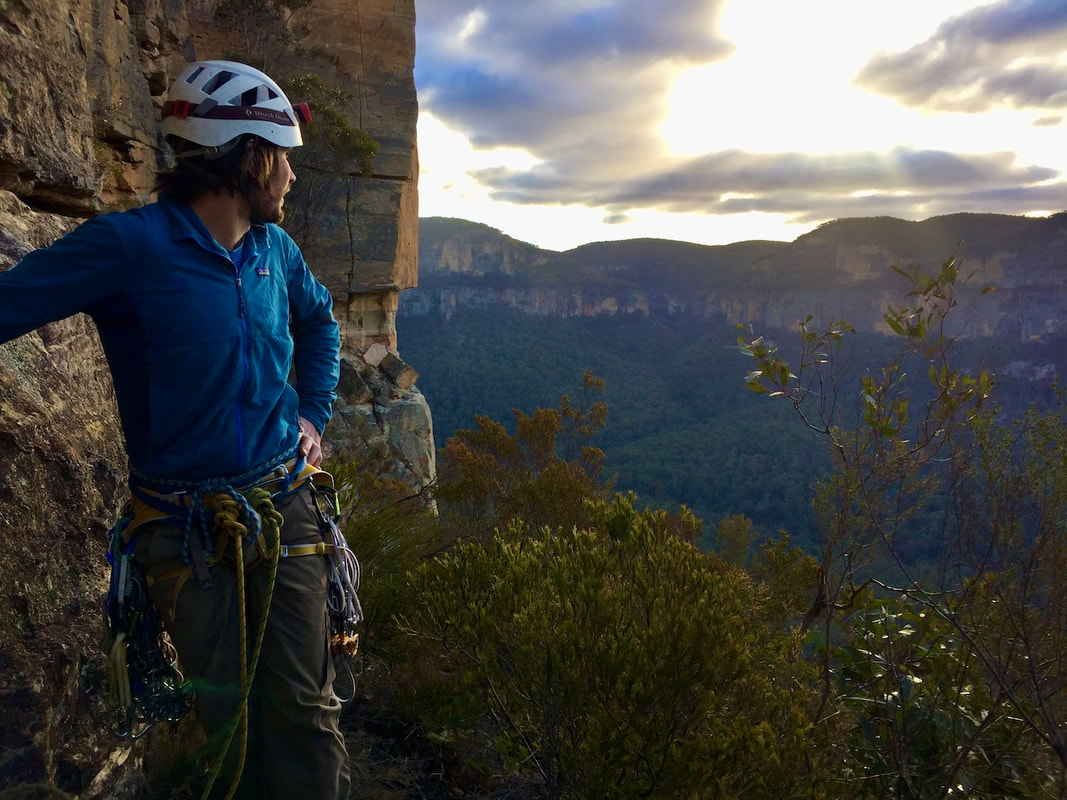 Hugh Sutherland on the halfway ledge. Photo Credit: Hugh Ward
By this stage the light was fading rapidly and the wind was howling through the valley. We looked out onto a cold, empty, and intimidating valley while we abseiled as efficiently as we could manage. It was too windy to hear each other, we were now in full dark, and operating in the glow of our head torches by the time the inevitable happened - the ropes got stuck. We still aren't sure how. We were taking a lot of care and doing all the right things, maybe it was the wind, maybe it was the crag bunyips, I dunno, but stuck they were.

Fortunately we had a plan b, and used our haul/tag line to rap the remaining distance to the ground and left the ropes to be dealt with in the morning. Once we were on the ground we poured down about a gallon of the Rocky Creek juice and cast around for a sheltered bivy at the base of the cliff. We found one, cooked up a meal and discussed the climb.

That night was terrible. The wind howled along the cliff tops and dislodged rocks the size of coffee beans from the halfway ledge, raining down on us throughout the night. The thought gnawed at us that these little rocks are supporting big ones that could fall too. By the morning, our sleeping bags were filled with rocks, thankfully no large ones.

We woke from a fitful sleep in the morning and, over coffee, made a plan to collect our ropes. Hugh jugged up to retrieve the bottom rope, then we walked up to the halfway ledge and started climbing again to retrieve the upper ropes. En route we passed a great looking corner, which Hugh climbed. I belayed while dodging a storm of falling rock. The cleaned up version that I climbed was great, about 22 (5.11-) in good rock. Ropes were found, fiddled with, abseiled down, then retrieved without hassle. Also without a sign of the reason for their jamming up.

Back on the ground we packed our gear and made for a little knoll where we planned to get some photos of the route and enjoy the sun. Once on the knoll we decided to work out exactly where the other routes were and it was during this in-depth process that disaster reared it’s ugly head.

We were trying to fit the description of Pardalote (22 or 5.11-) with the line that we had decided was it, and couldn't. After about 10 minutes of searching and debating, we discovered its description bore a remarkable similarity to the route we had just put up...Darragh’s Done It.

Denial, anger, depression, bargaining - I can tell you we experienced them all on that knoll of lost dreams and broken hearts, before we came to accept that Darragh (and Tom Williams) had, indeed, done it. It was called Pardalote, and the joke was well and truly on us! 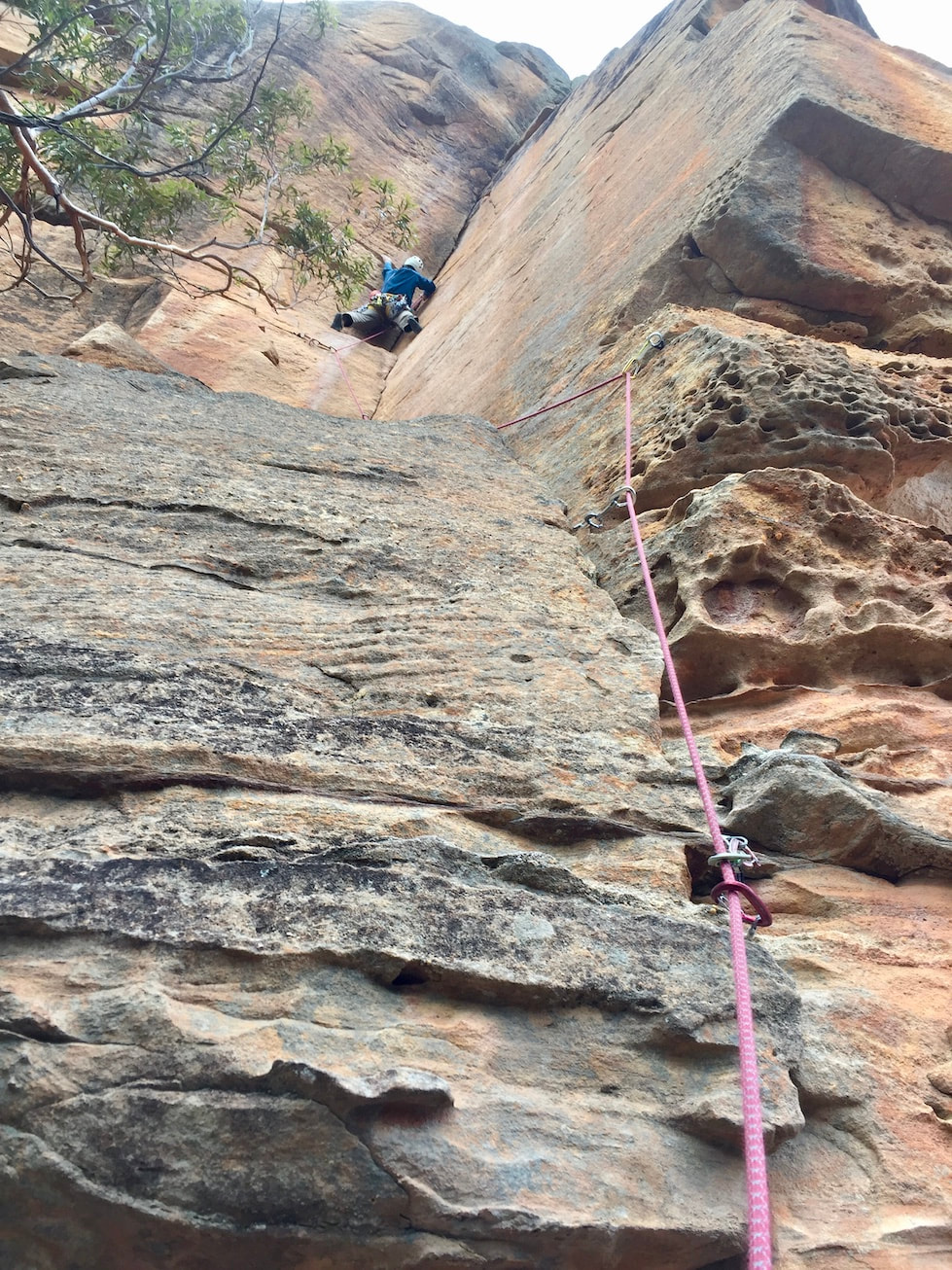