Now in Scotland for the next part of our road trip, having a lovely time, wish you were here!  We are missing Tasmania but the Dolomites are sensational, more rock than you can poke a stick at... and accessible too, apart from the queues on the popular routes. But they can still bite your bum as we found out, nearly to our cost.

You know accidents can be made up of small incidents. It's like the gaming machine, three lemons means you have hit the jackpot and are in deep shite.....

Lemon 1. Late start, lovely hot day, long-ish walk up to the South Pillar of Mariakante. The climb wasn’t supposed to be too hard but at 3000 meters, the air is a bit thin and everything takes more effort. Tom had selected the climb with his usual cunning - neat climbing, finishing at the téléphérique for a beer and a quick ride back down the mountain - as befitted a pair of pensioners.
​ 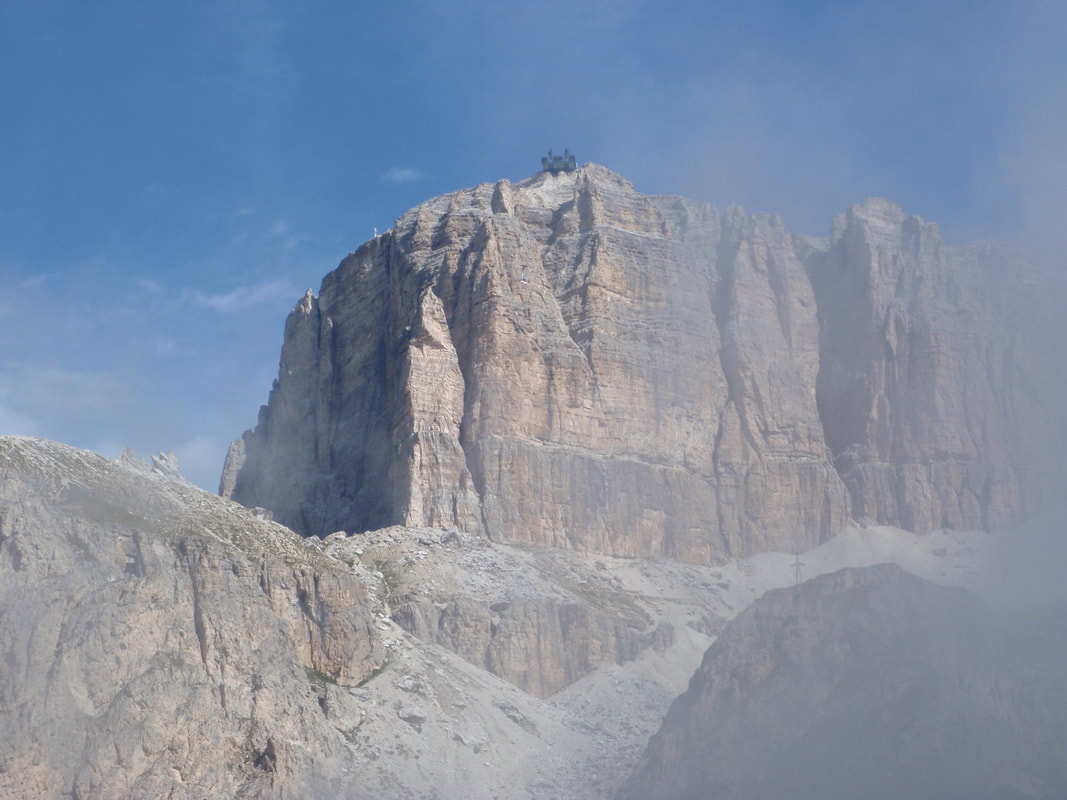 South Pillar Mariakante in the Dolomites of Italy. At the top is a cafe and the téléphérique/cable car that can be ridden down.
It was too hot really, but there was only a young Italian couple in front of us, so we relaxed in the sun. We didn’t realise they were a lemon.

Actually, they were a bit of a number, young, beautiful, all colour coordinated, red helmets, red jackets, even red socks and a red rope – lovely - and with helmet microphones too.

By pitch 5 though, which is a long committing traverse, they were clearly going way too slow - lots of “tight rope” or the Italian equivalent - and histrionics from the girl when it got too hard.

Tom was getting twitchy... “They are frigging too slow! The cloud is building, get past them before we get frigging benighted." 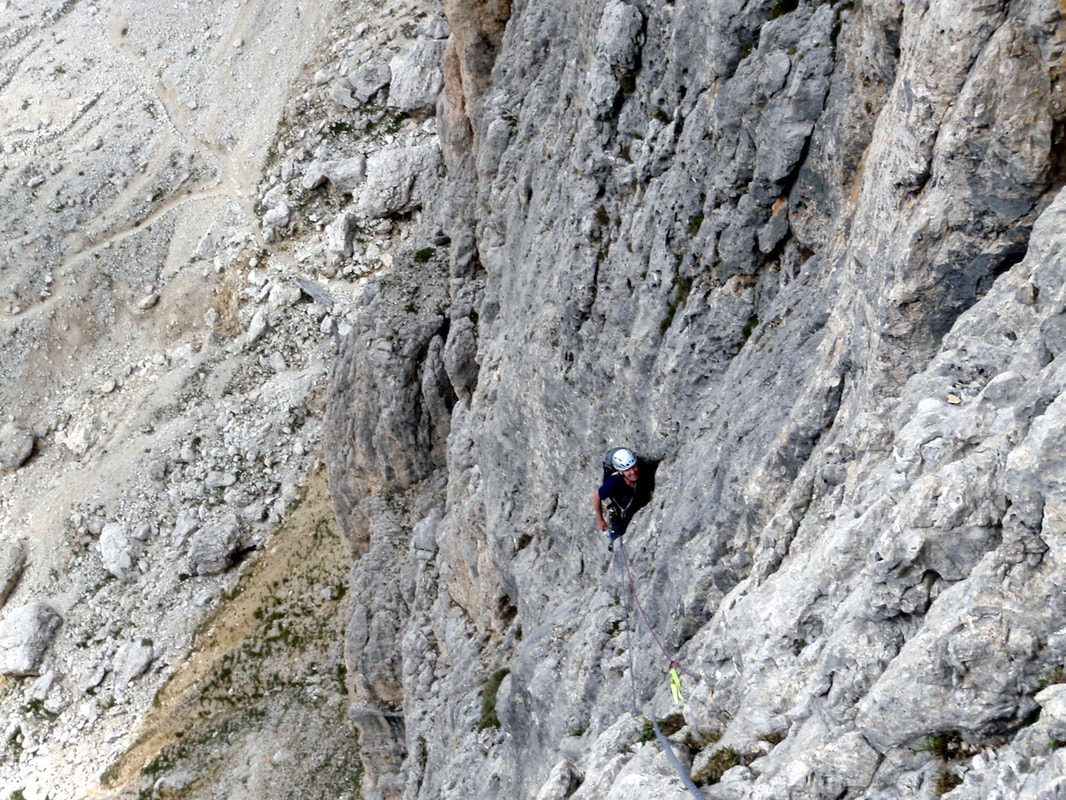 Tom on Pitch 5 of the traverse, just before all hell broke loose.
Lemon 2.   Suddenly, on pitch 6, gale force winds hit, tearing through the notch which connected us to the next part of the climb. The wind was so strong it started to blow large rocks down on us, triggering continuous stone-fall down the gully and across the next traverse. Hmm - how to climb very, very fast....

The couple was caught in all this and desperately climbed up to shelter wherever they could. We went up to the left, away from the danger. While the color-coordinated Italians hunkered down, we took the lead. It was a Russian-roulette traverse through the stones, past a couple of bomber threads, to an exposed belay out on the arête.

Lemon 3. The rain/hail arrived, adding to the wind and thick cloud. Communications were now difficult and there were waterfalls to dodge, as well as rocks... sigh.

The Italian's helmet microphones shorted out apparently, given the amount of shouting behind us in the storm.

We met up with three soaked, young Germans at the top of pitch 8 - they were going hypo as they had no waterproofs. By now we were racing for the final, easier pitches to the top, up a chimney, with minimal pro, and wet rock. Lovely... it felt like home in Tassie climbing in the cold and rain!

Lemon 4.  Did I say 3 lemons?  A sudden scream below us tore though the wind at the top of pitch 9. Shite.

We did a quick reverse to find the big German lad had pulled an absolutely massive block onto his arm, jamming it in the crack, him swinging off it. So in the rain, gale, etc. etc. we tugged and shoved and pulled and somehow, eventually, pried the rock off enough to wriggle his arm out. He fell out onto the rope to moan quietly to himself. A minor miracle, the arm wasn’t broken, probably because of the size of his fleshy bicep, but the crush injury was nasty.

We retreated upwards in chaotic confusion... the cable car passed literally just a few metres  above us, the guard gesticulating out the window that the last car down would leave in ”fünf minuten” - of course, we were desperate to get on it. We had five minutes left for the last two scrambly pitches!

Lemons all over the place now...  The Germans were hypothermic, quivering in the wind and stumbling, Tom and I weren't  much better, but at least we were still functioning as a team. Miles of rope were in a snarl of wet knitting amongst the sleet, hail, loose rock and roaring wind. The injured lad was shaking with shock, but climbing surprisingly strongly with the help of a tight rope and an occasional push, but still moaning quietly to himself.

Tom shot off up to the station, climbing over the safety barriers to “persuade” the cable car guard to wait. Tom's standing in the door and growling quietly but menacingly at the guard proved to be sufficient.

Two mins later, suddenly the game was over...

Quiet, warm, dry, safe, we were finally winging down to the pass in the last cabin of the day. High-fives and hugs were shared with the relieved Germans as they left to get the lad to hospital. Back at camp, we had lots of wine and food and hot showers. Life is sweet.

PS And the young Italian couple? No idea, they were still below us somewhere in the storm: the last we saw of them  they were beating a hasty retreat down an abseil, heading for the safety of the village below…

PPS BTW, the change in the weather was apparently due to a sudden “turbulent instability” over the Atlantic. Hmmm.... snowed all the next day. Don’t you love Alpine climbing?

PPPS Helmets with vents let in rain
This is an edited version of a piece shared with Common Climber and published by the author, Tony McKenny, in the Austrian Alpine Club Journal, 2011