By Joe Martin
It had been a long, 14-hour day at the tail end of a week-long run and I was finally close to my end-of-trip destination. This time I was on a Covid haul of toilet paper from Danvill, Kentucky to Worcester, Massachusetts. Prior to 2020, I would never have imagined that toilet paper would be the major survival commodity of an almost-apocalyptic panic from a virus. I would have guessed maybe medical supplies, freeze dried food, or survival gear. But nope - just a helluva lot of toilet paper.

The stores were running us as hard as we could go and this particular trip was a rough one. I hit heavy rain and high winds nearly the whole time on Interstate 90; It made the night pass slower than ever and raised my blood pressure about whether I'd deliver on time. You see with trucking you are racing at least three clocks of deadlines daily. One clock is shipping and receiving. If you miss your load or delivery time, your haul doesn't get loaded or unloaded. The second clock is the Department of Transportation hours of regulation; I've got 14 hours I can work but only 11 of those can be driving. Then you have the parking clock; We have fewer rest areas and truck stops than ever before, plus we have more truckers. This makes finding a parking spot anytime after  6 p.m. a hard task. The time pressure is almost always on.

My eyes burned with exhaustion but I kept my mind busy by thinking of climbing while the wheels rolled and the miles clicked by. Morning eventually arrived, the sky cleared, and the sun split the eastern sky. I knew I was gonna deliver on time. Thank God! I'd hate to imagine the sad outcome if I didn’t get those fine people some striking paper in such dark times.

Given the rough-weather start of this trip, I was surprised my delivery went smooth and fast. My back-haul of scrap aluminum was only a few miles away. It is unusual in this industry for two hauls in a row, but I was loaded in just a few minutes and ready to turn back around. This load delivered on Monday so I had about 16 hours I could break and still make it home to the grand prize of life - my family - by Friday evening.  Now, what to do with 16 hours? You bet your ass - climbing!

I scoped out my Mountain Project app of the area and saw I would be stopping within about 45 miles of the infamous Ross Rocks in Killingly, Connecticut. Ross Rocks first caught my eye when it was featured in the April 2013 of Rock and Ice magazine. It made the cover of that issue as “Ross Rocks Climb La Mesa." But it also has a deep climbing history that stirred my curiosity. The AMC (Appalachian Mountain Club) climbed at Ross Rocks as far back as the 1950’s. The AMC, which supports a mix of outdoor recreation with the purpose of environmental quality, protection, and beautification, is the oldest outdoor group in the United States. It was founded in 1876 by Edward Charles Pickering, who was a graduate of Harvard and made major advances in astronomy. Pickering was considered a genius by his peers and was leap years ahead of his time. It was his love of the stars, though, that forged his passion for lying beneath them and out of that was born the AMC.

I left Worcester pulled down to a Pilot Truckstop in Sturbridge, Massachusetts, dropped my trailer with a king pin lock, punched in Ross Road on my Rand McNally Trucker GPS and off bobtailing I went, heading south at a lope to find adventure at the crag. 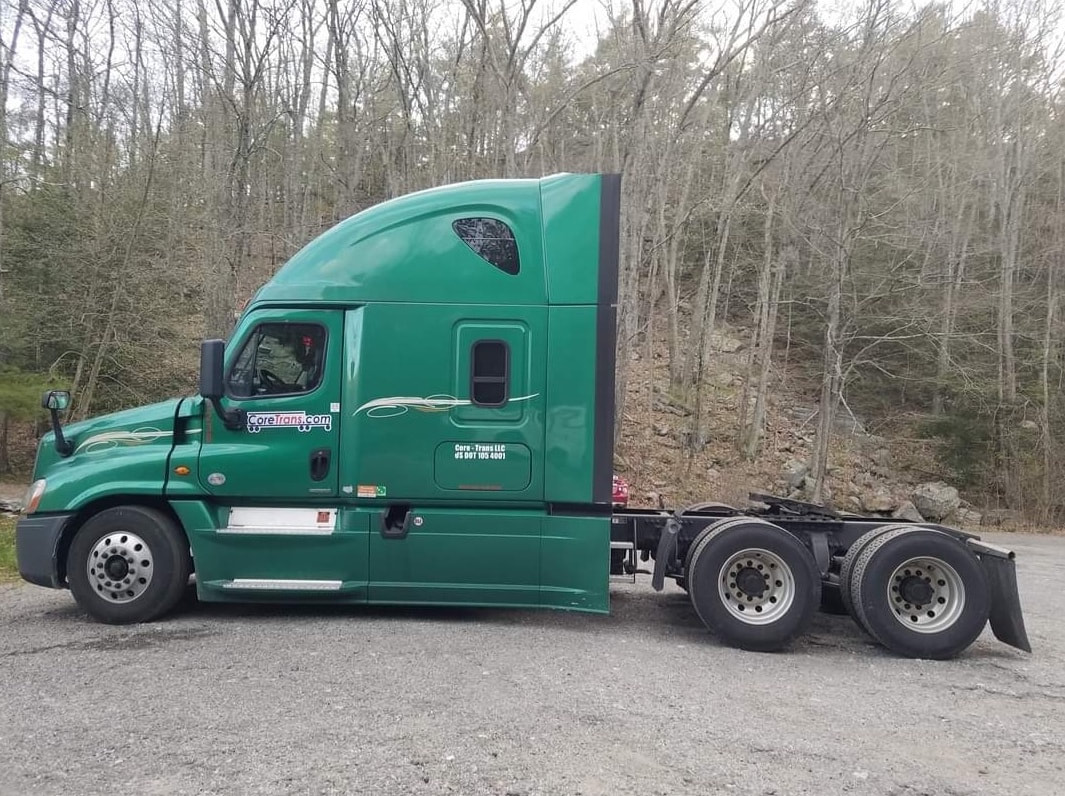 Joe's truck parked at the open parking lot of Ross Rocks. Photo Credit: Joe Martin.
​I told them I was looking for a particular climbing route that had piqued my attention - Fancy Footwork, a crimpy looking 5.10 - and that I planned to rope-solo it. It's hard to find climbing partners while out on the road, I explained, so, I almost always top rope solo or lead rope solo. Lead rope soloing is a lot of work, requiring total attention and focus on leading (and the risks that come with leading), self-belaying, and climbing all in one. Regardless of grade, I find it to be very rewarding when I climb solo.

After explaining my intentions, a fellow spoke up and informed me that someone had chopped all the bolts. Even the top anchors had been removed. I said “Well sir, I didn’t drive here not to climb, 'reckon I’ll just toprope it." I grabbed my gear and entered the woods, with most of the people in the parking lot following behind. It looked kinda like Forrest Gump with his followers a short distance behind.
I found my way to the top of the wall to a good, solid pine tree and set up a top rope on Fancy Footwork. Small crimpy holds greeted me at the beginning and for about the first 20 feet, I smeared my feet to keep purchase. Admittedly, it was difficult to resist straying a time or two into an inviting hand jam on the adjacent crack route called Quick Step while I worked out some sequences on the more difficult lower section of the climb. The second half of Fancy Footwork shifted personality though with some super fun, positive side pulls and holds. The climb was a great mix of styles.

When I finally reached the top after a few burns, I relaxed in my harness and took in the scenery. I had become so absorbed in the rock that only then did I notice that my little gathering of followers must have become bored watching the slow rope-solo and projecting process. They all had moved on and it was just me and the rock.

After getting my fill there, I moved to the right to a jam crack called Slippery When Wet. For a 5.8 this climb had an interesting mantle finish. Although the sun was starting to stretch into it's long shadows of the end of the day, I squeezed out a little more time and moved on to the Party Wall and found an interesting pinchy-slab route called La Rosa. It was a great way to end the day. I quickly wrapped up my gear and made my way back to the truck before having to pull out the headlamp. Now for the drive back after a physically satisfying day on the rock.

As the sun set, I carefully drove back to Sturbridge, traversing back and forth trying to ease over the impossible ruts, to finally reach the Interstate. It was dark by the time I was back on normal pavement and I had to adjust back to its normality. I found my trailer just as I had left it at the truck stop, took the kingpin lock off, backed under it, and called it a day.

I climbed into the bed located behind the seats in my rig, satisfied with a meal, my forearms and fingers stiffening as the tiredness set in. I slipped into a dream where the mind takes your day and switches it up. “Damn! This has to be the absolute worst stance on planet earth!” "Who in the hell would place chain anchors here?” I struggled to find a place of balance. "I’m pumping out" “I can’t fall here! Not at the anchors!” I fall and then wake up startled; Not long after my alarm goes off. I felt relieved as my waking brain replaced the stressful dream with the reality of the relaxed top-rope solo.

As the sun rose in the distance, I hopped in the truck-stop shower, grabbed some coffee, and headed home to my family. I didn't have to deliver the load of aluminum until Monday, so I looked forward to some barbecue, hikes, and hugs with my wife and kiddo. Jack Johnson played on the radio and the New York landscape seemed extra bright.

As I passed other truckers, I wondered, “Is there another truck driver somewhere out there reflecting on his or her climbing adventures?” I’ve never met a fellow driver at the crag. I've never met one at the gym, for that matter. I sure wish that would change. With the satisfaction of climbing to shed the stress of the rainy toilet-paper run, I focused back on my next joy. I could almost feel my wife Katie’s loving embrace and looked forward to the big smile from my three-year-old son.

If you are ever out there and see my 'ole green semi parked at a crag, grab your harness and a belay device and let's climb.