By Keith Bell
Editor's Note Three Part Series on Rysavy Ridge: The Migrant Pom on Rysavy Ridge (by Tony McKenny) was originally published in 1978 in the (now defunct) Australian magazine "Thrutch" and in the "History of Climbing in Tasmania" (2019). Common Climber has been given permission to republish the article as part of a three article series about the Ridge. These stories take us from the first ascent of the rock by Tony McKenny (The Migrant Pom on Rysavy Ridge), to two ascents this year in 2021:  A long-awaited first-time ascent by Keith Bell (this article - Throng of Roland) and the likely final ascent of the ridge that Tony McKenny will do in his lifetime (Fast Forward…Rysavy Ridge Revisited). Read all three to gain some wonderful perspectives of this place.​
​Throng of Roland

Count Roland to a ridge – Rysavy right?
then unfurled his Edelrid rope so bright,
Laced his helm for a climber made.
Girt Black Diamond about waist bade,
Around his neck he hung many slings,
With crabs emblazoned on the things.
And he grasped in his hand his peerless guide.
White was its pages with strategic fold
Low to his hips the protection rolled.
Who are his followers? all may see.
And they exclaim, “We will follow thee”.

(Adapted from the "Song of Roland" an 11th century French epic war poem – Verse LXV)
Many years ago, I read an article in the long defunct ‘Walkabout’ magazine written by Ben Sandilands, an acknowledged wordsmith who was destined to become my good friend. The article described his traverse of the Eastern Arthur Range in the rugged and isolated south-western corner of Tasmania; the southern end of which is buttressed by the imposing pinnacle of Federation Peak – The Monarch of the Southwest.

As an eighteen-year-old I was smitten, I had to get there, my first big mountain peak. Teaming up with my first climbing partner, Bob Gerdes we organised the travel and other arrangements from Sydney to Hobart, Tasmania for the14-day trek it entailed. Through alternating storms, winds, and some sunshine, we completed the then trackless rugged traverse and climbed Federation by its voie normale as well.

Arriving dishevelled, dirty but supremely elated back in Hobart - with time to spare - we decided to head northwest to check out another famous Tasmanian peak – Cradle Mountain.

Sitting on a bus heading west along a dirt road from Devonport I occasioned upon my first view of Mt. Roland, a long dark and castellated ridge to our south. Its ragged towering outline reminded me of a phalanx of charging horses, their riders holding aloft lances, pennons, pikes, and even curved sabres. The peak bagger part of me was instantly hooked and I was determined at some stage I would battle my way up its flanks to its summit. 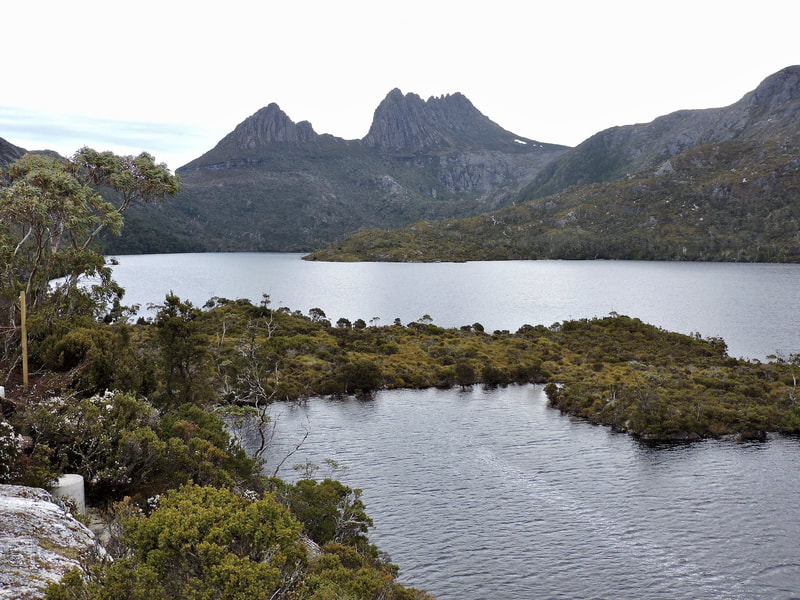 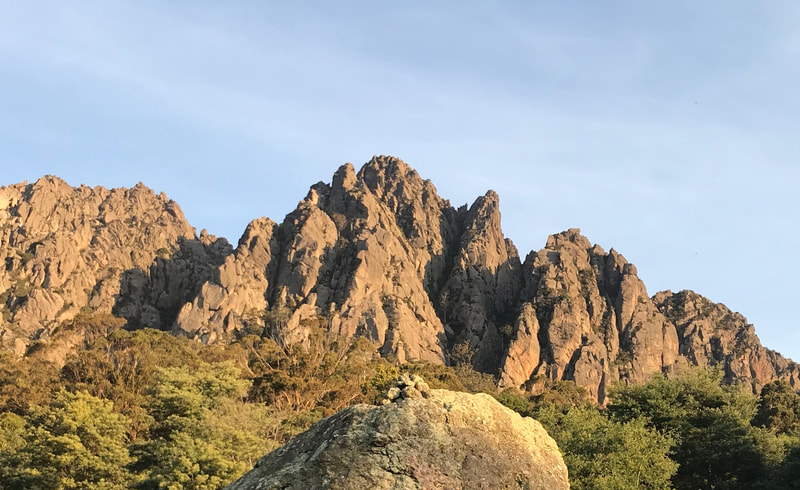 Click on the photos above to enlarge and see captions (or hover over photo for captions).
In November 2018 I managed to pass by it on the way again to Cradle Mountain. My wife, a non-climber, had seen very little of Tasmania and I was keen to show her the sublime view of Cradle Mountain across the narrow, ebony expanse of Dove Lake nestled at its foot. My good mate, Ian "Humzoo" Thomas kindly put us up in his Launceston home and drove us out to Cradle Mountain making sure that he went to the very toe of Mt. Roland below that now elusive ridge.

He knew that I was keen to engage in a crusade upon its conglomerate pleasures.  And there it was, finally, a broadsword pointing towards the sky, but I could only look but not touch. That campaign would have to wait for still yet another day.

Then a window of opportunity opened up and a friend and I prepared for a Mt. Roland romp in 2020. We were all set to go, then a global plague and pestilence arrived - Covid-19. I would have to be content with Netflix, reading, and being "locked down" in our Sydney home, dreaming of faraway mountains, especially one that gnawed away at my mind.

Tasmania throughout 2020 and early 2021, as with many other Australian states remained inviolate, borders closed with a two-week quarantine if you dared to travel there. Periodically they would open, but then promptly close when the virus again became rampant. Finally, a window of opportunity, the Northern Beaches epidemic of Sydney was quelled, and Tasmania allowed the unrestricted entry of Sydneysiders into the "Apple Isle."

My good friends Dave Gray and Vanessa Wills, strong climbers both, were residing in Hobart; I quickly phoned Dave and yes, he was keen, Rysavy would be our quest for the Holy Grail. Zoo again offered to share his abode with me in Launceston - a perfect launching pad for many Tassie peaks including the shadowy, ragged heights of Mt. Roland. An eleven day "Green Card" from home and a ticket from Sydney to Launceston provided the path to the base of Rysavy. But foreboding thoughts of the virus cutting loose again and the potential personal consequences that would bring, were a constant weight on my mind as I charged south.

Prior to leaving for Tasmania, I received a kind invitation to join in a mass assault of Rysavy Ridge on the weekend of the 20th and 21st March 2021. Predictably, I had to forgo this as I was arriving in Launceston on the Sunday, too late to join the party. And a party it was including Tony McKenny (one of the first ascentionists), Neale Smith, Nic Deka, Jim Duff, Stu Scott and Carol Hurst, all luminaries of Tasmanian climbing; some, like me, wanting to send Rysavy before the rigours of age got in the way. (Though it seems age did not weary them because after the ascent a big night was spent at Steve Brown’s farm, essentially the climbs start and end point, celebrating. Steve, a Rysavy first ascensionist and the friendly "keeper of the gate," kindly permits the climbs’ aspirants to freely cross his land. Thanks Steve, you are a legend!)
That night we drove to a convenient camping area at the base of Mt. Roland. A pair of climbers had arrived later than us in the night and camped nearby. Worryingly, I overheard them mention that they had their haul bag packed. If they were Rysavy bound, I thought it would be best not to let them take the lead position, as the resultant conga line would make for a slow, possibly dangerous ascent - especially if rain arrived while we were on the climb.

First light revealed a blue, cloudless sky. The other climbers had already left, although the guidebook requests that movement across the Steve’s farm should not be undertaken too early. We arrived at the farm at around 8:30 a.m. to be warmly welcomed by Steve. After some banter, he assured us that we had the grid position. Phew! The other climbers would be dragging their haul sack up some other route. The stars had finally started to align for Rysavy!

Soon we were moving up the steep farm track that led to a walk-up steeper ground through reasonably open forest. However, this path was strewn with loose, shattered, quartzite stones of various sizes that afforded unstable walking. At the toe of the ridge, we found three separate small ledges for gearing up. Then Vanessa led off to quickly knock off the first long pitch. Vanessa and Dave continued swapping leads while I settled comfortably into the role of "tail end Charlie." 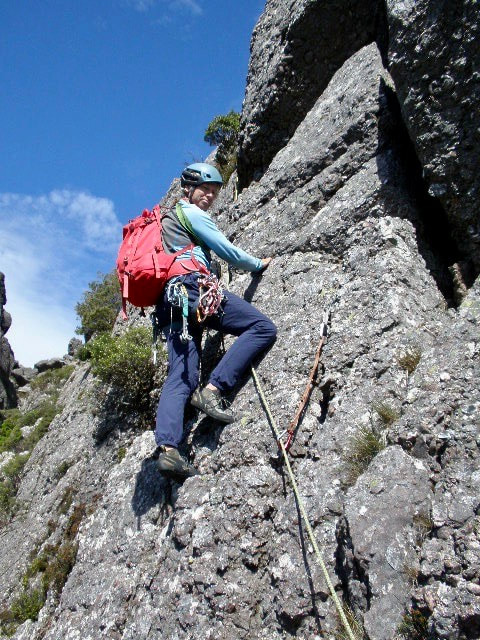 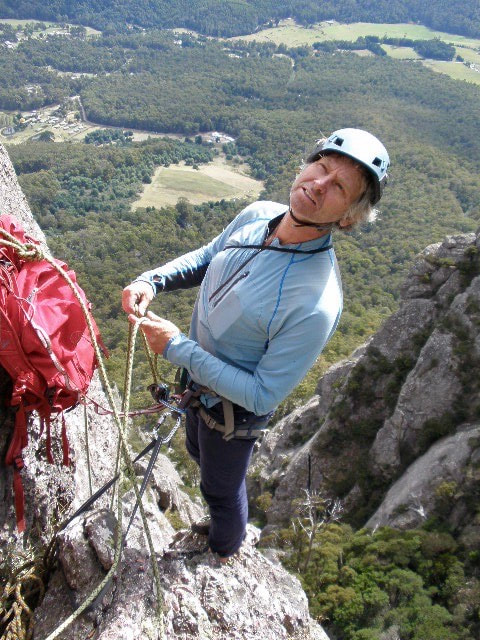 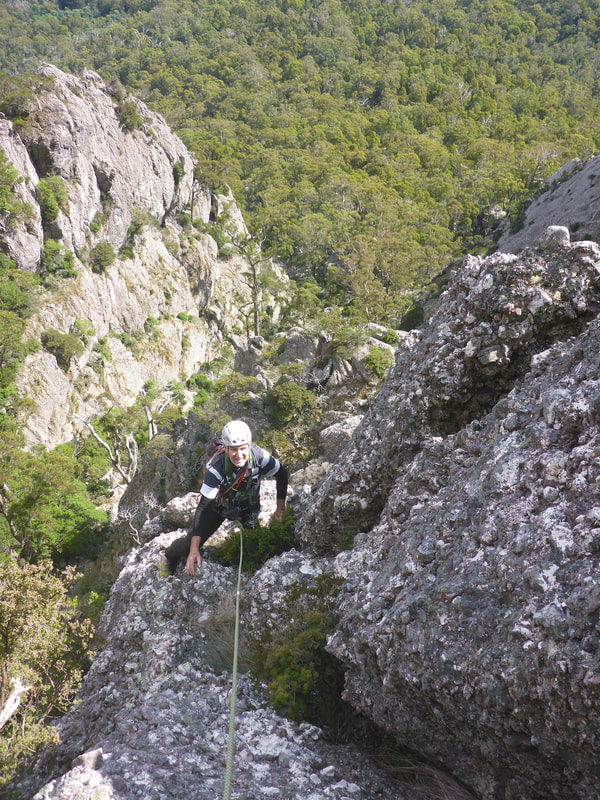 Click on the photos above to enlarge and see captions (or hover over photo for captions).
Assuming this position gave me plenty of time to take in the view, which was always spectacular, particularly as we gained height. One downside was that I had to remove most of the pro. Aside from a smattering of wired wedges, it was mostly cams. Good placements for both types of pro existed, but they were spread out into disconnected cracks and interlocking boulders. The cams were usually hard to remove given the rough surface offered by the interlocking rocks within the matrix. Persistence though, won the day and no cams or other pro were sacrificed.

I thought the rough aggregation of various sized stones and pebbles made for some excellent wall climbing. Sharp quartzite edges leavened with the occasional smooth river stone offered beautiful climbing with plentiful ledges and belay spots thrown in for good measure. Above us, a blue, cloudless sky allowed the sun to lightly burnish our backs. Below us the surrounding countryside was a patchwork of verdant green.

Our eleventh and final pitch took in the final airy, picturesque Au Cheval ridge and, although it was easy, it gave one the feeling of being on top of the world. (Forgive my indulgence here, but it also had parallels with the Au Cheval ridge near the top of the southeast ridge of Balls Pyramid... but, admittedly, the similarity could have come from the fact that I had shared moving along that Au Cheval ridge - albeit on different days - with Dave and Vanessa on the Balls Pyramid expedition in March 2017.) As the "old geezer" of the party, I was really elated to be led up this long-term goal by Dave and Vanessa on such a sparkling day. 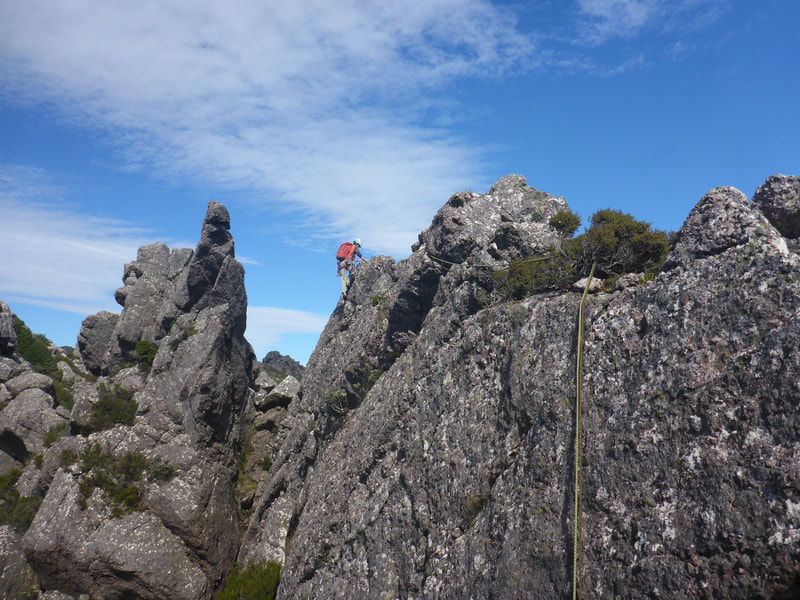 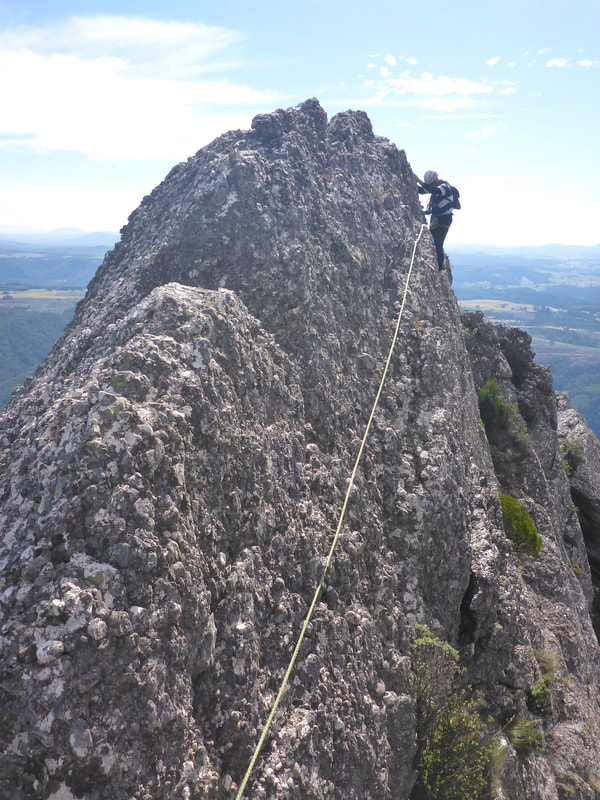 Long run-outs, traversing,  and tricky, varied terrain are features of Rysavy Ridge. The followers are not necessarily protected either. Click on the photos above to enlarge. (Photo Credits: Dave Gray)
Moving into the col, where the descent starts, there were "high fives" and smiles all around. What a day, what a climb. I had finally summited the tip of the Roland’s sword. Off in the distance Cradle Mountain, the quest of my original sojourns, sat tantalisingly on the horizon, wreathed in cloud, some 40 kilometres (25 miles) directly to the west. Seeing Cradle Mountain made for a satisfying connection.

But, this climb does not end at the top. The descent down the gully below the col entails about 7 or 8 abseils with some steep walking in between stations. The gully is grotto-like at times and the abseils go over several overhangs, which provide some exciting moments. The guide summed it up succinctly.

“The vertical jungle rap is beautiful."

We abseiled and scrambled down the gully reaching the base of the ridge without mishap. All was looking good. However, some "old warrior" - ahem - on the way down managed to show his lack of balance and stealth by doing somersaults not once, but twice. That certain person arrived back at Steve’s farm with lacerated and bloodied hands, a twisted left thumb and a dented ego.

Although the copious blood on my hands came from wounds that were largely superficial, Steve probably thought that my "red gloves" indicated a battle of Rolandic proportions with the ridge above. But Vanessa and I had now ticked Rysavy Ridge and Dave added another notch to his impressive number of ascents of this classic, iconic climb. It had only taken me 56 years to finally climb its distant flanks.

It was a little after 6:30 p.m., light fading, as we arrived back at the farm and spoke with Steve, who mentioned that the ridge had received some 90 ascents throughout the Summer. Throngs of Roland indeed.

Those on the first ascent in February 1977 - Steve Brown, Tony McKenny, John Woods, and John Richardson - must be very proud of their remarkable route, since so many others, including the three of us, have by our actions exclaimed proudly and loudly: “We will follow thee." 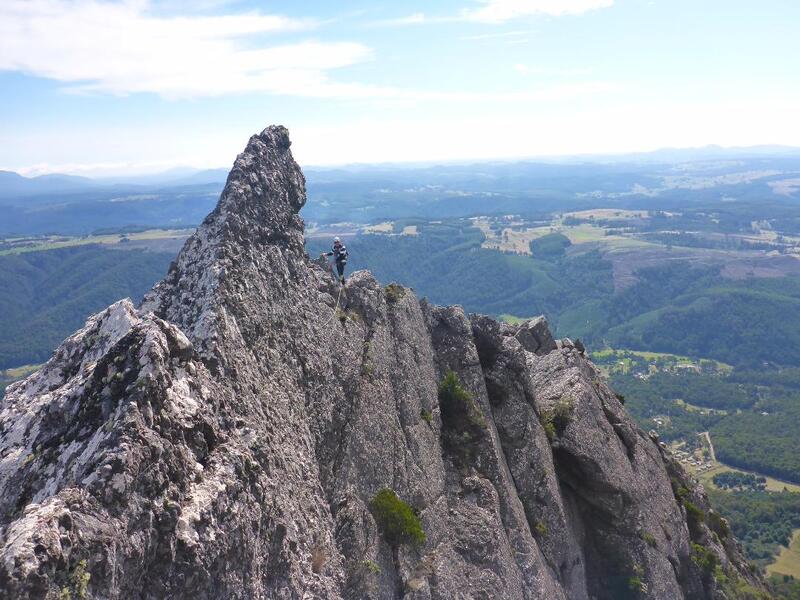 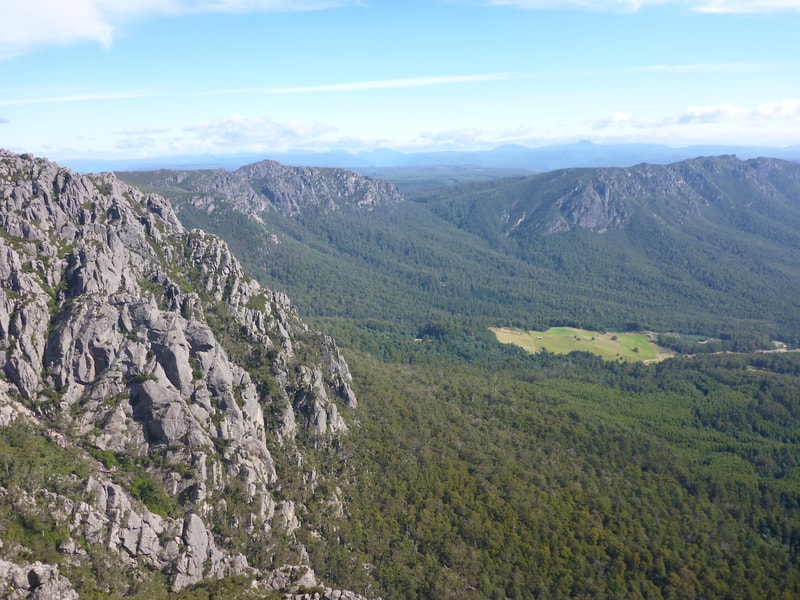 Click on the photos above to enlarge and see captions (or hover over photo for captions).