When I say “commitment” I’m talking about effort and time. In the US, the National Climbing Classification System (NCCS) rating is THE system that provides some inkling about how long a route will take. The concept and execution is so simple, and in fact it is the only system that flat out tells you “this route will take this long.” The NCCS takes average pitch difficulty, route finding, and other factors into mind for the ratings! Here’s the system: 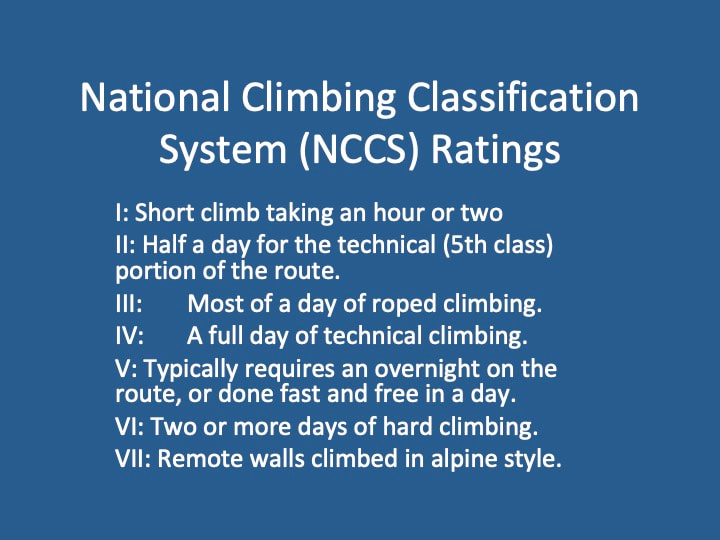 This rating combined with the difficulty rating (YDS, etc.) gives you everything you need. Simple and irrefutable – right?!

Thin Air (Cathedral Ledge, NH) is a Grade II, Crimson Chrysalis (Red Rock Canyon, NV) is Grade III, and The Nose (Yosemite, CA) is a Grade VI. But wait…Grade VI says it should take >2days and several parties recently climbed it in less than 3 hours. That’s barely a Grade II. And…uuhhh…a friend was on a Grade I the other weekend and spent over half a day on it. How could we…I mean…they have turned a Grade I into a II?  OK, maybe not so irrefutable.

But it’s still a useful system…except for the first 2 grades – those aren’t really used because I’s and II’s are straight forward and ubiquitous. Also, keep in mind it doesn’t consider approach and descent time and effort involved.

So, we have a system where two of the ratings are typically ignored, it doesn’t account for the whole process from car to car, and has time estimates that are basically ballpark.

Hmm…Perhaps there is a rating system from another country. The French Alpine system is close, but it really applies to mountaineering and alpine climbing. The Alaska grades are also geared towards mountaineering as well as Scottish winter grades, New Zealand alpine grades, and Canadian winter commitment grades.

The NCCS can apply to big rock as well as mountaineering, which makes it more widely known to rock climbers.

There is another commitment rating system which I think has a lot of value – the British Trad Grades. This system has the familiar Technical grade, and adds a bonus rating in an Adjective grade.  The Adjective grade compliments the Technical grade by indicating if the route is burly, average, or soft for the grade (it is more complicated than that, but this is the quick explanation). Considering how the actual difficulty is all over the place for older sub-5.10 routes, I would LOVE to have this system here in the US.

But alas, we still have to pull all the information together and make a guess for ourselves when researching a particular route. To really derive a commitment grade that works, one really needs to look at:
​

Then balance all this with your climbing style, fitness, first hand reports, experience, speed, etc. to come up with a final assessment of commitment.

I think to quantify the commitment of a route would take a massive algorithm with 100’s of data points on the route, you, and your climbing style, which sounds cool, but also creepy.

Until then, we’ll just have to look at all the information we have available to us, make a guess, go for it, and come back afterwards to say ever-so-simply “it was a Grade IV”.