​By Stefani Dawn ​​​​
The Why
This review begins with four disclaimers:

(1) Standard daisy chains (which are used in aid climbing) should not be used as a personal anchor system (refer to this Black Diamond video to see why). With that said, the CAMP Daisy Twist eliminates one of the concerns of a standard daisy chain (i.e. what happens when the stitching breaks) via spiral construction and double stitching on both sides of the chain. You should use two separate, independent carabiners in a chain system (also explained in the Black Diamond video). This provides redundancy, especially when you clip each carabiner into separate points in the anchor (Do NOT clip one carabiner into the second carabiner as demonstrated in the video).

2) If your PAS is not redundant, it is recommended to use a second back-up system, such as the rope, when at a multi-pitch anchor. You can make the CAMP Daisy Twist system completely redundant by adding some webbing to the tie-in point (see the photo and description at the bottom of the page).

(3) I am not a safety expert, but I do care very much about safety and try to think carefully about and investigate the equipment that I use. I will always pick safety over weight savings, but I also try to find gear that has multiple practical uses. In the sub-bullets below I describe the multiple uses for the Daisy Twist on multi-pitch climbs.

(4) People will argue to not use a static material as a PAS (like the polyester used in the CAMP Daisy Twist). The argument is, if you fall the force will go into the body and injure or break the back.  This can be avoided by never allowing slack in your PAS which could result in a fall and shock load of the PAS and anchor (i.e. clip yourself as close to the anchor as possible - allowing enough room to move and belay - and do NOT position yourself above the anchor while connected to the PAS). 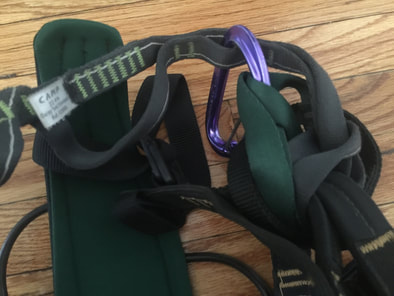 PHOTO: For those who are concerned about redundancy in all aspects of their PAS (and do not want to use the rope as a back-up in their multi-pitch anchor system), then you can add a piece of webbing at the tie-in point. This photo shows a small piece of green webbing going through the harness tie-in (next to the light grey PAS tie-in). The green webbing is connected to the PAS via a carabiner in the first small loop. You can eliminate the carabiner by tying a water knot, but doing so does not make it any less bulky. With this configuration you at least have a spare carabiner.