​The Extraordinary Story of a Climber &
​Survivor -Sabine Pratt Hunziker

​​By Dave Barnes
Sometimes flicking through posts on social media an image shouts out. My screen flashed on this Climbing Siren, she was on a climb named, Little Red Riding Hood (17) at the Lighthouse area of Point Perpendicular. The climb is soldier salute vertical and a Pacific blue ocean collides with the rocks below waiting to devour falling climbers.  I wanted to know what attracted this climber to such a place. What I learnt was the story ran deeper than just a climber and gnarly climb. 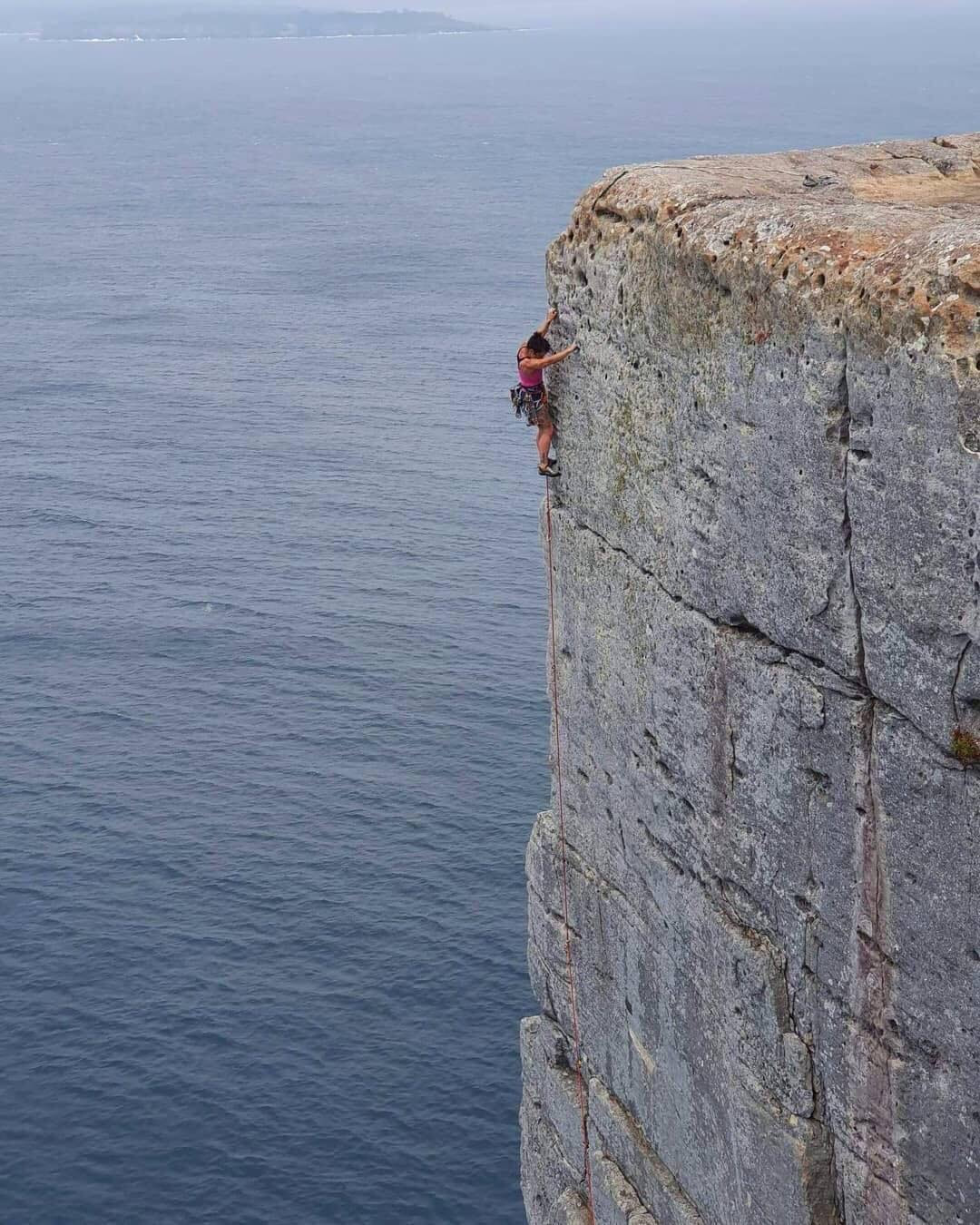 Sabine leading Red Riding Hood (17/5.9). (Photo Courtesy of Michelle Stewart)
​Sabine Pratt-Hunziker has been intrepid since childhood. Her parents encouraged her and her brother, Thomas to get out of the house and into the world. Growing up in Switzerland gave her a heavenly platform to horse ride in "za" Mountains and cut turns down "za" steep ski slopes near her home. As a young woman her heart followed a backpacker named Paul to Australia and she wound up training as a remedial therapist whilst cruising its West and South Coast breaks with her partner.   She says of the time, “I fell pregnant when we were around Batesman Bay [South Coast of NSW] and I am still here.” Now independent Sabine is raising her teenage twins but still remains in contact with Paul and they share the responsibilities of parenting. 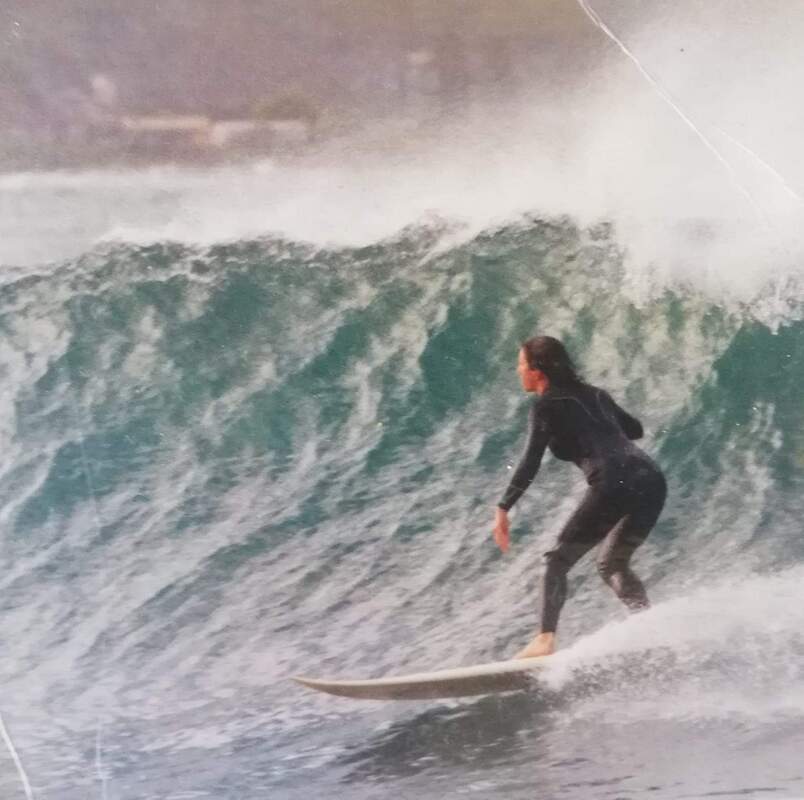 SBH’s other passion - surfing a West Coast break. (Photo credit: SBH Collection.)
​Sabine took up climbing at age 42 after a mountain biking accident made a meal out of a shoulder which required surgery.  “I was keen to get out and do some exercise to strengthen my shoulder.” She had a friend who introduced her to the game at Tianjara Falls where she completed her first route and loved it. She was hooked bad shoulder and all. 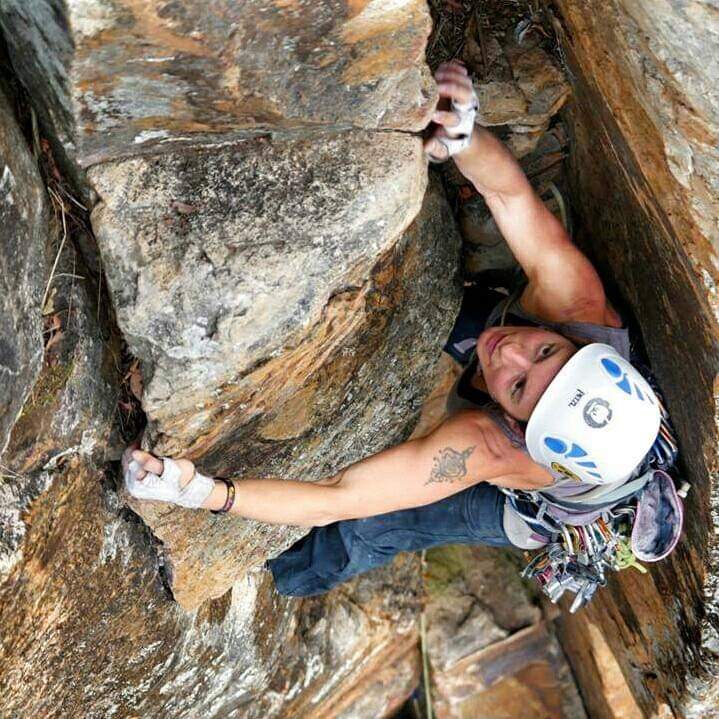 One of Sabine’s first trad leads at Frog Buttress. (Photo By Crazy John Fisher. SBH Collection)
​
​Sabine is a person who doesn’t dip a toe she likes to dive right in. Like any athlete of merit she imbeds herself in learning and is always seeking to improve, ad nauseam to her climbing buddies. Rick Phillips is her climbing partner and friend. He gave me a little insight into Sabine’s climbing.

Whenever Sabine says, 'Hey, can you belay me on my project?’ That’s it, your day is gone.  The times I have looked across at someone doing their fifth lap whilst Bean Brain is still working the start moves..."

I say, 'Heh Sabine, let’s stick clip the next couple of bolts it’s getting dark?'

Then she says, 'Yeah but I just want to do some falling practice first.'

Really, falling practice? I avoid it at all costs!"

Sabine is driven to improve.  Her flow on a surfboard and chewing dust on the bike transferred to climbing with long days at Nowra, particularly at The Goldmine. She climbed at Nowra so frequently she scored a flashy photo on Lassiter’s Wall in the 2016 Nowra Guide. Beyond the noise, her favourite place to hang out is at her local Point Perpendicular - from which she frequently posts things that would have me wetting myself. She is smitten with this unique location.
​“Point Perp is definitely my favourite place! The atmosphere, exposure, the wildlife, there is always good people there. It’s my spiritual place.” ​

Sabine would need to muster all the spirit she had for what was coming in 2019. The twins had just turned 11 and Sabine had booked a short climbing holiday on the other side of the ditch. It was midsummer and Sabine was climbing with some fireside friends at a popular sport climbing location at the Northern tip of the South Island of New Zealand called, Payne's Ford.

Sabine woke up in a sterile hospital ward, looking up she saw her family milling around her hospital bed. Her brother had flown from Switzerland with his wife, her children, her ex-husband Paul and his mother, all of them were looking down on her. In time Sabine has gathered her memories and pieced together the feedback from her friends and family’s to make sense of this time.

“I had no idea what had happened nor did I question this unusual situation. I was full of drugs and had suffered a massive concussion. After I had survived the transport to hospital and the implant of a stent into my aorta I was put into an induced coma for two to three weeks."

Sabine’s brother was taken aback when he arrived that first time by her bedside.

“When we arrived Sabine was on a ventilator in an artificial coma with a dialysis machine as multiple organs were not working due to Sepsis. That first sight was frightening as she was surrounded by machines, but we were relieved that her face was uninjured and that she still looked like my sister.”

Some memory of that day was triggered by my brother’s intervention. I then remembered the friends I climbed with and where we were climbing. It was hot and sunny, a beautiful day and we wanted to climb eighteen 18’s. I remember being at the anchor of the route I fell off. I had communicated with the friends down below, asked them if both ends of my rope touched the ground and I also told them that I was going to test my ATC before coming off safety. To do that I had to pull myself up a bit, my safety line was quite long and was carrying my whole weight. I remember the vibrant yellow colour of my safety line and how I was feeling around for a good hold to pull myself up to shorten my ATC set up. That was the last thing I remember.  Some months later when I went through my gear I saw that my locking carabiner had snapped at the gate.”

This information aside Sabine still doesn’t know what happened at the moment she fell that day.

Post injury Sabine had other concerns. Nightmares came in waves, and it was a significant struggle by medical personnel to keep her alive. This included ten hours of surgery to have a rod put in her thoracic spine and screws in her pelvis internally as well as externally. In short the climber had broken her spine, her pelvis was pulverised, her ribs and sternum were mashed and her left clavicle and scapula broken. Sabine’s left hand and arm had been subjected to so much force that her median nerve was damaged and she had lost sensory and motor function in parts of her hand. Her lungs were also injured and she could not breathe independently so assistance was provided for her.  Her body was so weak from fighting these issues it became vulnerable and Sabine contracted pneumonia and severe sepsis.

The doctors thought I wouldn't make it...but I did and slowly got better. I was then repatriated to Australia where I spent nine weeks lying flat on my back. I wasn't allowed to sit up more than thirty degrees and every time I needed to wee two nurses had to roll me onto my side.”

Twice a day she dragged herself to the hospital gym to harness more strength and it was no easy assignment but she persevered.  After four months in hospital she was discharged and went home to her children.  Paul had been with them throughout.  Outpatient recovery has seen Sabine receive mental health assistance for herself and her kids enabling the family to forge a path through PTSD.  I asked Sabine’s children to give me their take on their mum and Laila said,

“I see my mum try very hard to excel at something she loves doing.”

Kai was more pointed, “I see that mum is happier now and it’s great we got a dog out of the accident." 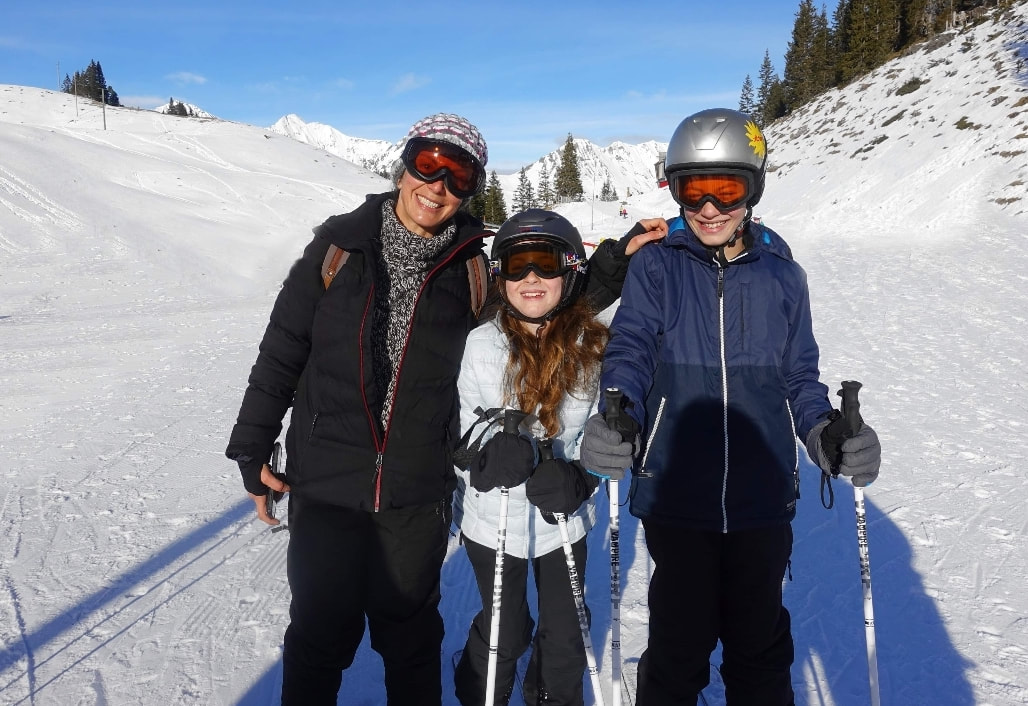 Ski trip in Switzerland with the kids one year post-accident.
​Animal therapy is a winner and Max the ridgeback and Norris the red heeler no doubt will be assisting in the healing. Family has been essential for Sabine’s return to the world, her brother and her kids have been strong allies in her recovery which Sabine wanted to recognise. Thomas gave me his perspective.

“My sister is the strongest and most determined person I know. Eleven months later Sabine and the children visited us in Switzerland. It was incredible to see her walk almost as before the accident.”

Sabine hasn’t just learned to walk, she has found the courage to climb the first outing being Sloth (16) at Thompsons Point at Nowra and the most recent, Rex Hunts Love Child (21) at Point Perpendicular. She enjoyed them both.  I wanted to ask Sabine about her confidence on the rock particularly in light of her experiences?

My head game in climbing has always been a challenge for me.  I believe it is important to visit your fears and climbing has always taught me that. In a way my accident has taught me not to let fear control my life. I have chosen to continue climbing as it enhances my life despite the risks and the fears I feel so vividly.”

Some people are forged through education and opportunity others through adversity and challenge.  I would say that Sabine has evolved with all of these but she certainly has faced a few challenges in her life.  The grace is she has had the character to persevere and overcome them with the assistance of her family and friends, her healthy lifestyle and the clinical personnel, all of which have assisted her body to heal and her mind to think with more clarity.

Sabine is an amazing person, tough as nails physically and mentally.  She will always push herself and by doing that you can’t take anything away from her achievements. I know a lot of people who have walked away from much less.  She deserves all the credit owing to her.” 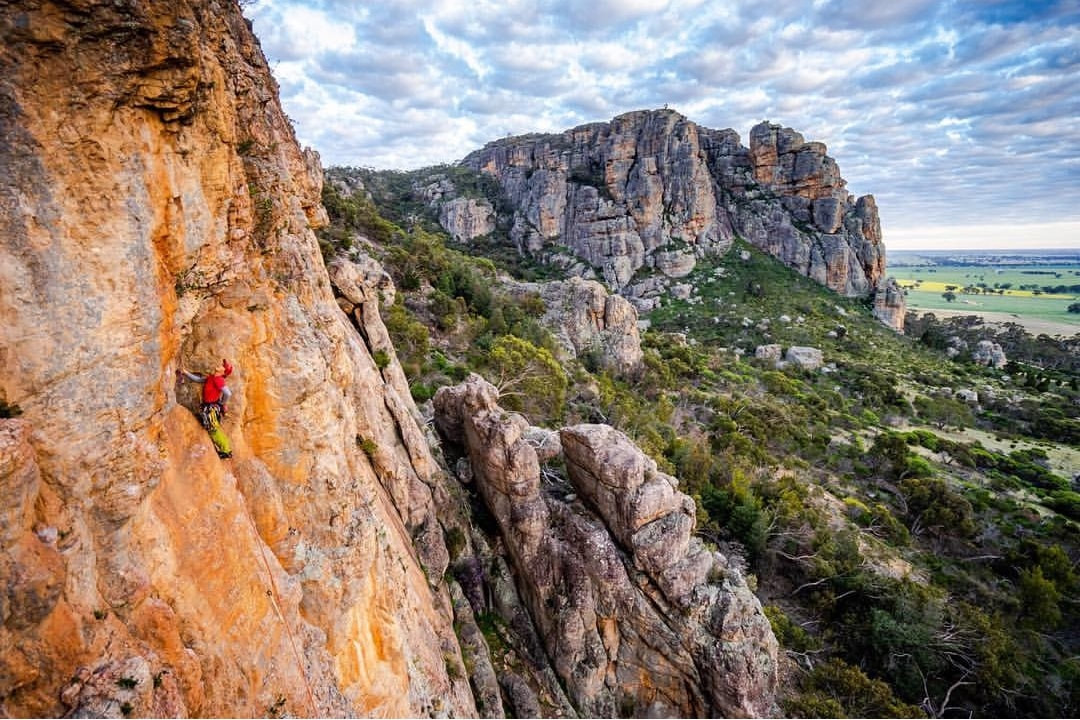 Arapiles, Jen's Roof (18/5.9), (Photo Credit: Casey Dubois)
​Sabine’s accident taught her much about herself and of others and the events of Payne’s Ford, and her subsequent hospitalisation and recovery have made a significant impact on her and her family.

​“My accident has taught me a lot about life and in a strange sense it has been one of the most valuable learning journeys in my life.” Sabine doesn’t choose adventure activities to prove anything but she does realise that through adventure she has nurtured a mindset that can surmount obstacles and eye adversity with courage not fear.  In saying that she knows that whilst climbing she may have to dance with them both to succeed.

When Sabine climbs she reveals a tattoo on her torso. It is a quote by C.G. Jung that says, "How can I be substantial if I don't cast a shadow? I must have a dark side also to be complete."

She chose this because for her there is truth in these words, that there is light and shade in all of us and without both we wouldn't whole.  Sabine Pratt- Hunziker has spent time in both of these spheres and she has kept her head and her heart intact. CG Jung also said this wisdom,

“I am not what happened to me I am whom I choose to become.”

I look forward to watching Sabine evolve as a woman, a mum, and as a climber.  I will be checking out those Point Perp photos looking for that magic that keeps her rising above those waves.   ​ 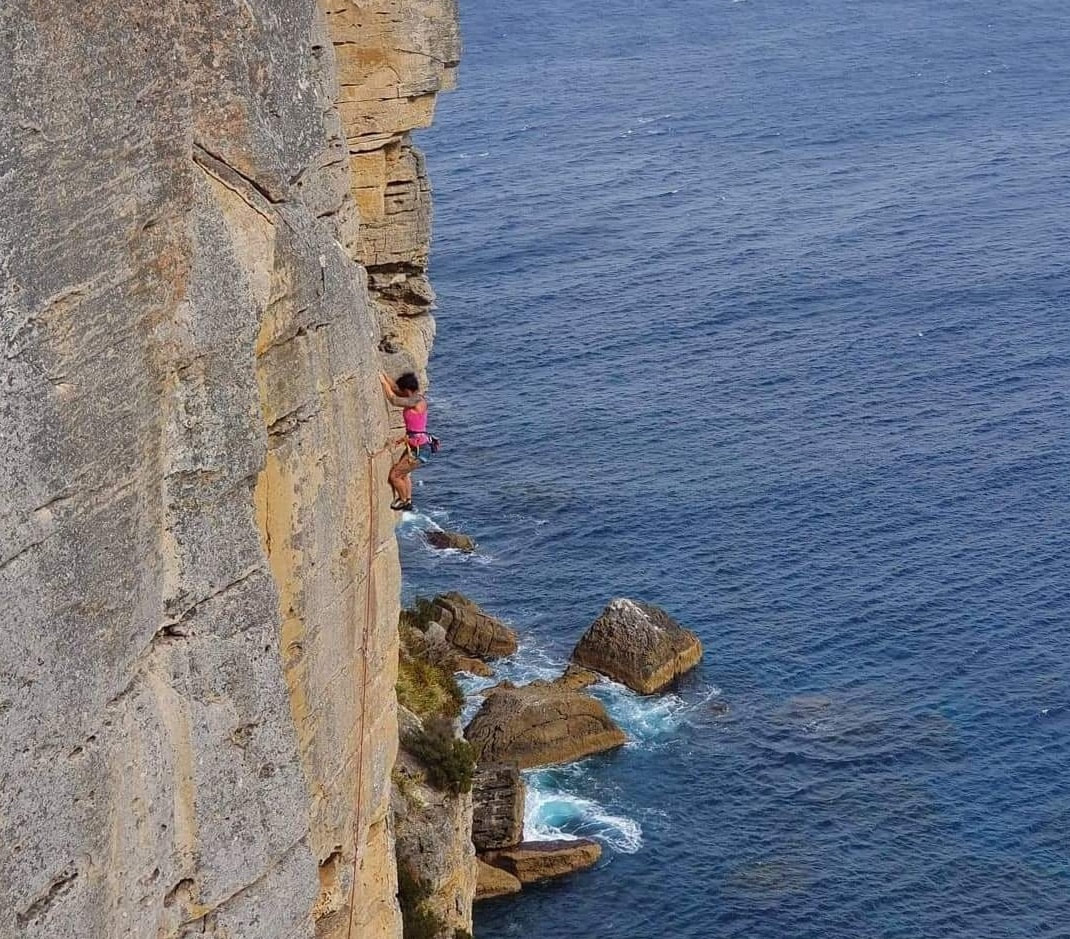