You are from Costa Rica and working on your PhD in Ecology and Evolutionary Biology at Purdue University in Indiana and you are a climber and photographer! Wow! Since we are a climbing magazine, let's begin with the rock climbing side of things. Tell us about your rock climbing genesis - how and when you started to rock climb and how it has evolved [I had to work evolution in there somehow :-) ]

I was introduced to the sport in 2020, but it wasn’t until February of 2021 that I started climbing. As an evolutionary biologist, one of my favorite concepts in evolution is called phenotypic plasticity: the ability to physically express genetic traits that allow an organism to survive depending on the environmental conditions. Thus, one individual can perform very differently depending on the environment in which they grow. I like to use this metaphor with my climbing journey.

I was introduced to the sport by a former partner, but the relationship was toxic and emotionally abusive. When I left this relationship, my environment changed. I was not longer neglected or belittled by this person and, in fact, found supportive folks at the gym. I built a healthy relationship with climbing. I would climb a 5.6 maybe 3 times in a row and then I would try a 5.7. At some point in my training session, I would try something harder…”just to see how it feels." The best part? No one was watching me, judging me, or making fun of me. I would fall and within seconds I would be back on the wall. I went from 5.8 to 5.10 within just a few weeks.

I also bought two books: “Rock climbing: Mastering Basic Skills” and “How to Rappel” by Craig Luebben and learned as much as I could from them. I read a chapter each night and started to climb at my local gym two to three times per week. Then, I transitioned to outdoor climbing when I took a lead climbing class and felt comfortable enough with my abilities to join other women outdoors. I still have tons to learn about climbing and really want to improve my technical skills, but the community is what keeps me here!
What would you say to a newer climber or someone who might feel intimidated by the "culture of climbing?"

That those feelings are valid and spot-on.

I truly believe that anyone belongs to climbing because climbing is about yourself and how you connect with your own body. Climbing is intimidating because it is not only a sport, it is also dangerous and competitive. When you start climbing your body is going to respond to it with fear, anxiety, adrenaline, and soreness. It is important to understand this, as your body is trying to keep you alive.

It's also important that when you make one small progression to think about it and repeat it. That small progression will replicate session after session and then, your body will respond back by getting stronger and calmer. That inner strength of finding joy in something like climbing is the best thing about the sport.

Andy Muan (he/they) (IG: @andyshootspictures) is on the climb “To Defy the Laws of Tradition” at the Red River Gorge, Kentucky. Andy is part of the "Climbing with Immigrants" photo series. They migrated from Taiwan and Katherine describes Andy as "unapologetically himself." (Photo Credit: Katherine González)
You are also a photographer who loves taking photos of reptiles and amphibians - the types of animals you are studying about in your degree - but you also take photos of rock climbing. You have a special photography project called "Climbing with Immigrants." Tell us more about that project - what prompted you to start it and what message you hope to convey through it.

When I first tried climbing outdoors, I had a hard time digesting everything about it. I feared climbing because I knew very little about it. I was also still assimilating the transition from my home country to the US. I felt alienated at the crag and didn’t climb for the whole weekend. The only familiar thing that I had with me was my camera, so I snapped pictures of my friend Andy. It felt great, but when I came back home I started wondering if there were more people like me out there…immigrants navigating similar experiences and feeling they didn’t belong in the climbing community.

I wanted to my make my personal climbing experience more meaningful and built real connections with people. This is how “Climbing with Immigrants” was born.

The concept of the project is very simple. Two immigrants climb outside for a day and I take a picture of them climbing. But what happens after is the most amazing part of the project. We get to know each other’s migration story. We talk about their families, what they love the most about their home country and what role climbing has in their life journey in the U.S. When they read their story through the eyes of another immigrant, they feel seen, validated, supported, and empowered. They feel even more empowered when they see their picture climbing strong and determined!
Can you share some photos and stories of some of the immigrants you have photographed?

So far, each of the stories have taught me valuable lessons and surprisingly, all these stories collectively tell one big story: the migration experience.

For instance, Margarita who is from Puerto Rico was my first climber to photograph and from her I learned it is okay to assimilate some part of the American culture while keeping your home country cultural identity. Margarita is also an active member of the climbing community at the Red River Gorge and it truly inspired me to always give back to the community I share space with.

Andy, who migrated from Taiwan, is unapologetically him, which is something I still struggle with, especially in predominantly white spaces where I tone down and try to make myself fit in.

Irena from Hong Kong was the hardest story to write because…well, how can you put in less than 2000 words the life of a person who has been through that much? Her resilience and braveness in the mist of the pandemic while battling depression really hit me because her story captures the experience of isolation that many immigrants go through.

Then, I climbed with Karla who is from the Philippines. I deeply admire Karla for taking such a huge role in the climbing community at the Muir Valley, while also raising the most amazing kid, Lucy.

Yiting, who is from Singapore, is a tremendous scientist and mother of two kids who reminds me to always be bold and grateful for the many opportunities this country has offered to people like us without losing our cultural identity. 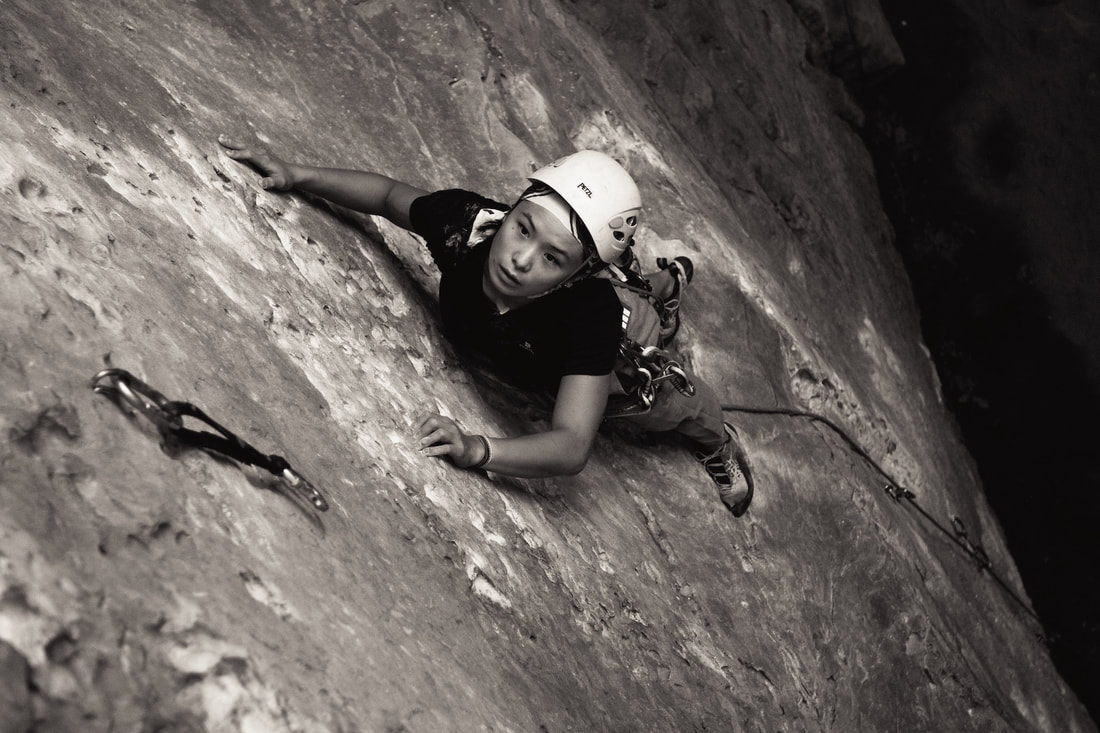 Irena Wong (she/they) (IG: @irena_wsy) is on the climb “To Defy the Laws of Tradition” at the Red River Gorge, Kentucky. Katherine says of Irena's "Climbing with Immigrants" photo story: "Irena from Hong Kong and was the hardest story to write because…well, how can you put in less than 2000 words the life of a person who has been through that much?" (Photo Credit: Katherine González)
Are these immigrants people you know in your community? How are you connecting with them?

I have met some of these climbers here in Purdue University while others I met through social media and my climbing gym. Facebook groups have been my best source of communication and all of these people have become part of my climbing community! All of these climbers are Common Climbers - people like you or me who work hard Monday through Friday and occasionally take time to climb outside! But perhaps the difference here is that these climbers navigate spaces from a different perspective, the immigrant perspective. 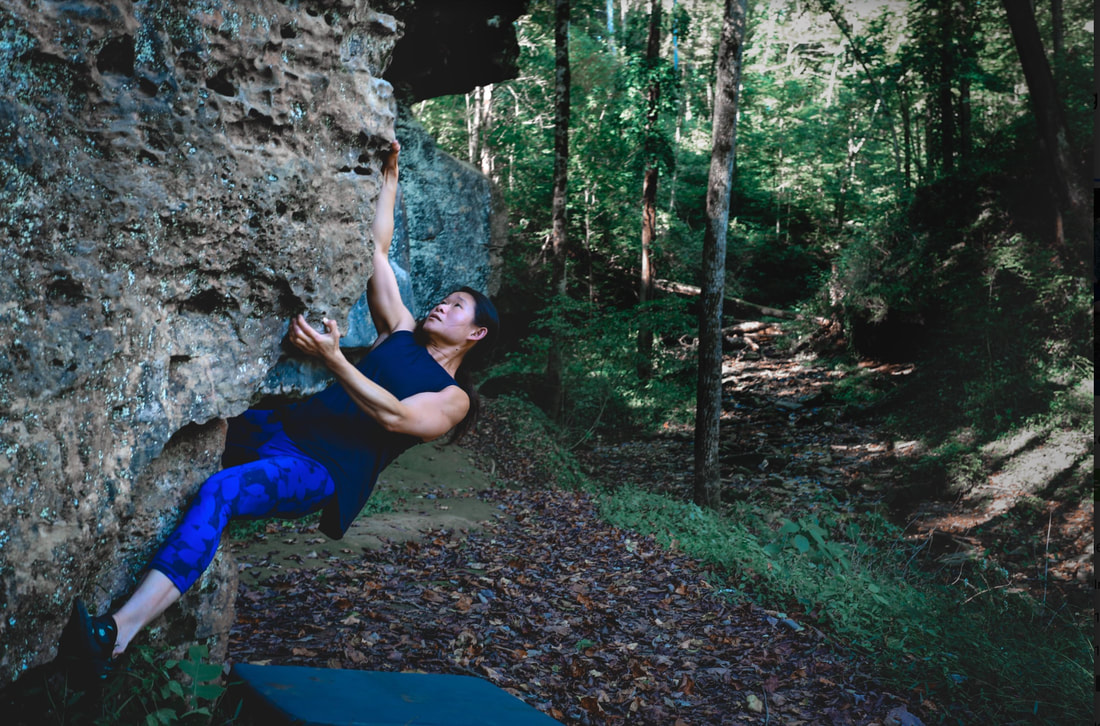 Yiting is a scientist and mother of two from Singapore. Photo was taken at Muscatatuck Park in Indiana. (Photo Credit: Katherine González)
Indiana isn't well known for climbing. Do you have a favorite local crag that you go to? Where do you go to climb?

Unfortunately, Indiana does not have many places to climb so I go the Red River Gorge, which I consider my home crag. But I have also been exploring the Muscatatuck in Southern Indiana and I would say it has a lot of potential for some weekend bouldering sessions with friends. I have also climbed in my home country, and it was an interesting experience, ticos are so loud at the crags!
You originally hail from Costa Rica, which has some of the greatest biodiversity in the world. Where do you envision yourself after you get your PhD?

Costa Rica is my dream place: it has mountains, pristine rivers, amazing wildlife, fresh fruits, nice food and beer, the most incredible sunsets, and the beach…well, I mean the place is just stunning.

​Paradoxically, biologists struggle a lot to get a job and pay the bills. Often, people obtain a second degree or run small business to survive, so most PhD students stay in the U.S. after they graduate to pursue teaching positions at universities. I struggle a lot with the idea of limiting myself to doing one thing in my life, so I have been exploring the idea of doing science communication and storytelling either here in the United States or Latinamerica. I am really interested in bringing scientists and the public together to better understand and protect nature. There is still a lot to be done as scientists to better translate our science to the public and make better decisions as a whole society, especially with marginalized communities and threatened ecosystems.
How did you end up in a biological research career? Did you have parents, a teacher, or a mentor that encouraged you? Was there something that inspired you?

I call it my best life accident! I am a first-generation grad student and the only scientist in the family. I got into science because ever since I was little I always wanted to be in nature and protect it. In my college application I tried med-vet first to help animals, but my second career option was biology and that’s what I got! I am always inspired by the belief that every organism and element in nature plays a role in our planet and that we must do everything we can to protect it.
Any last words?

Stories like the ones I am telling with my project are around us - they could be the people who you climb with. If you know someone who is an immigrant in your climbing community, offer your support and space to talk and share a coffee. The journey as an immigrant to the U.S. is hard, but sharing a smile, a hug, and a catch is the best gift we can have!
WEBSITE: https://katherinegonzalezv.wordpress.com/
INSTAGRAM: https://www.instagram.com/kathglz_/