Additional Featured Photos By Jan Virt
Photo: Climbing partner Steven taken by the author Frothy Thomson
Climbing at the Verdon Gorge in the depth of winter is a starkly different experience to being there during the summer
​My previous visit had been in the heart of summer, and had featured ludicrously early starts to avoid the inevitable queue of climbers on the popular multipitches, and –perhaps more importantly- the likelihood of spontaneously combusting when the sun hits the wall.

​Summer climbing was marked by strangely punctual afternoon storms that you could set your watch by, and would -- for the better part of an hour -- pummel the scenery into oblivion, before departing just as hastily.
So too, there was an overwhelming rabble of tourists that did their utmost to entangle themselves in your ropes while they tripped over each other (and prospectively the cliff edge) to take photos of the lunatics far below. The climbing campgrounds were packed, the town –La Palud-Sur-Verdon- had a decidedly “holiday” atmosphere, and buses, cyclists and a not unsurprising number of French-made diesel cars clogged the road. 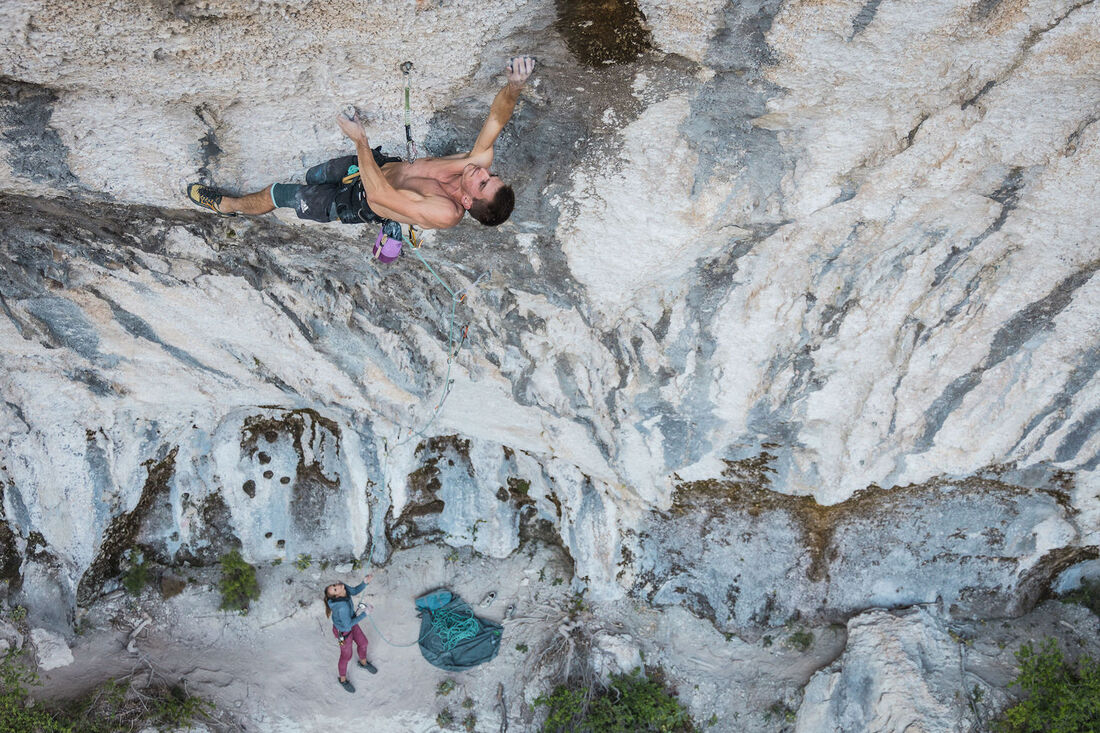 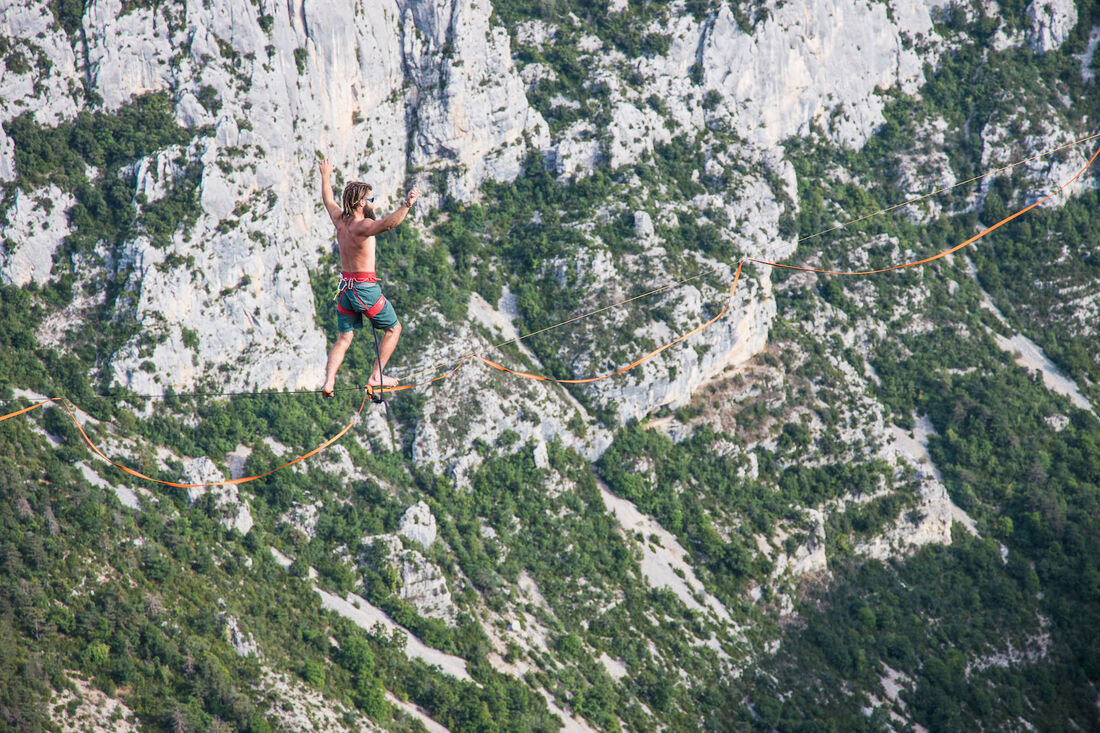 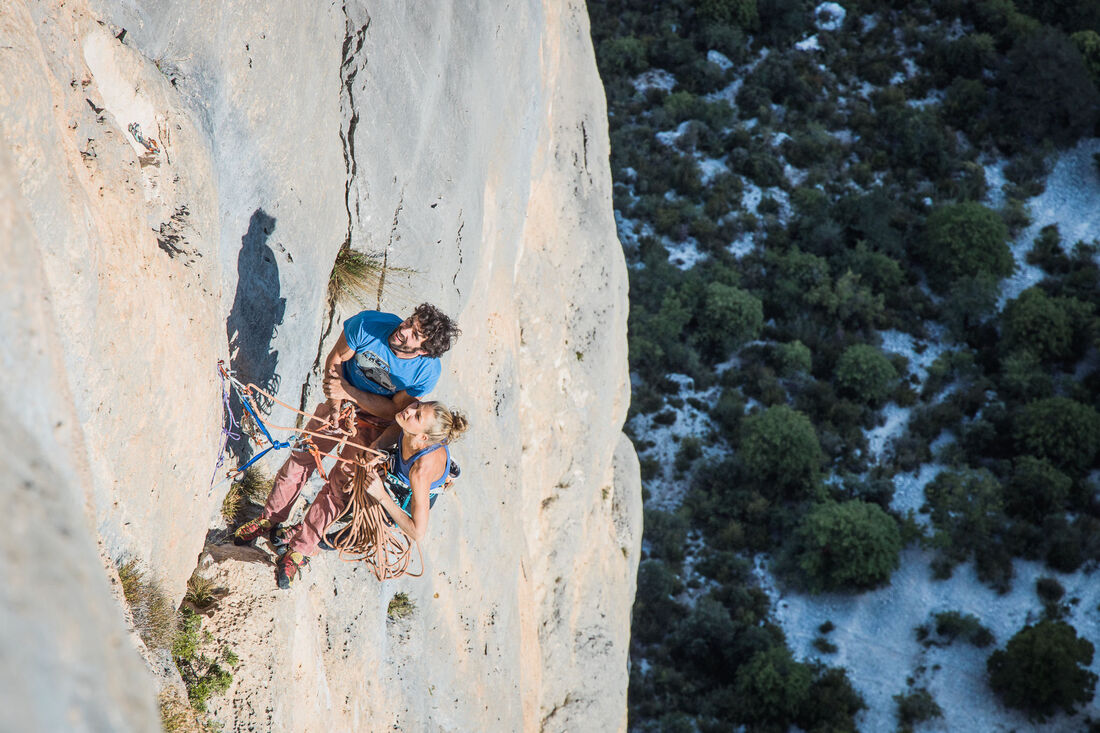 Summer festivities in Verdon Photo Credit: Jan Virt
​Passing through La Palud in winter, by contrast, is a grim experience. The restaurant, Lou Cafetie (where in summer we would retreat in the face of torrential storms to drink 1-litre steins of Hoegaarden and wait for the cliffs to dry out) is shuttered until the new year. And, the climbing gastronome’s delight, the streetside pizza opposite it, is naught but a distant memory. The tourists are gone, all but the gates are closed to visitors, the colours are grey, the leaves have all fallen, and a poignant layer of snow coats everything. 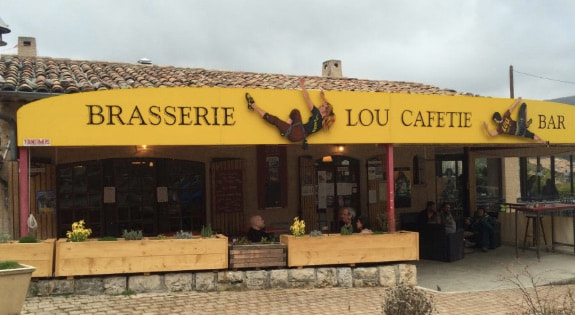 The cliffs are decidedly ominous.

They haven’t shrunk since I was last here, but the length of the days certainly have, and so too has the rabble of sightseers.

​The roads and routes are desolate, and in our entire time this trip, we see only one other climbing party on the rock. In summer, you cannot help but feel a degree of consolation in knowing that if it all turns pear-shaped, you could probably just shout loudly and be rescued from four different directions. In winter, no one is coming to your rescue, which adds an intriguing vibe of true commitment to any abseil approach down the gorge. The one advantage to it all is that you have the popular routes all to yourself.

​This time, though, we aren’t after a popular route, nor a convenient one.

​If we were smart we’d be climbing in the sun – and indeed, we’ve previously climbed some of the more conventional routes while appreciating whatever warmth we could draw to stave off hypothermia - but that isn’t audacious enough now that we’ve found our sea-legs. After all, something given has no value. Our goal is in the shade all day, on a bigger slice of rock, with a longer approach, and is more technically challenging. But as exciting as the prospect is, the fact of the matter is that it’s bloody cold, almost to the point of being insurmountable as a free-climber.

Suffering adds weight to the experience, and makes it more memorable. If you drive along the highway to work and it’s a beautiful day, with light traffic, and a breakfast-show host that isn’t too obnoxious on the radio, you don’t remember it. But if the inverse occurs – think: hail, torrential rain, car accidents -  the experience will stay with you for life.
Humans aren’t conditioned to recall the fine details in positive experiences, merely the general perception of non-descript pleasure. But the heightened senses of a harrowing experience leads to vivid, complex, highly emotional recall, and it is that which I am chasing in my climbing journey.

​Some people can derive pleasure from contriving suffering, such as arbitrarily sleeping on a portaledge on a relatively tame multipitch, or expressly setting out to do wet canyons in winter (possibly naked for added masochism), but such things have no meaning to me, because they exist only as suffering in isolation. To me, it cannot be sought-out expressly, merely coincidental to achieving a larger goal. In this instance we’re not attempting this goal because it’s the middle of winter, we’re attempting it in spite of it. A truly worthwhile goal should be just the right-side of rational audacity, with a little extra suffering to give it colour. That is what this feels like to me.

Crossing the glacial blue Verdon river proves an uninviting though undeniably beautiful aesthetic barrier. Missing on this particular crossing are the canyoneers, rafters, swimmers and tourists that swarm it through the summer, being enjoyed only by us on this day. The absent throng don’t know what they’re missing.

We ascend the steep approach to the route with only a few unplanned detours. Standing below the face, it should seem imposing - and it cannot be disputed that we are insignificant next to it - but it doesn’t. It looms large before us, the sky overhead continues to send warning signals in the form of snow-gravid clouds, an alpine wind is blowing, and the too-short day is continuing to grow shorter as we gear-up. Yet despite all of this, the experience to come, the suffering it will encompass, stands as an emotive, sensorial -- something amidst lives that are just so much white-noise and mediocre nothing. This is going to be awesome.

My partner leads the first pitch. It’s not particularly difficult in terms of grade, but it’s wandery, weird and dangerously runout. He seems to take forever, and I wonder if he’s feeling burdened by the task ahead. Then I lead second the pitch, and I realize that it’s less a case of nerves, and more the fact that it really is wandery, weird and dangerously runout. The feeling in my fingers and toes is gone before I’m halfway up the pitch, and won’t return from its impromptu sabbatical until we’re drinking red-wine in the evening and struggling to thaw-out.
When you’re wearing it, you’re still shivering and feeling nauseated, but at least it is a marked difference to how you feel when you’re not wearing it. It’s an effective solution, though slower than I would prefer.

​It’s a special kind of deliciously satisfying masochism, and despite harbouring thoughts of bailing for the first few pitches, as the resignation to the elements arrives, the agony becomes almost commonplace. Suddenly I’m able to appreciate the beauty of our surroundings once again as the cocoon opens up, and a living world returns. Later, I would find out that my partner was entertaining the same dreams of retreat, but didn’t want to give voice for fear of disappointing me. Funny, I used the same reasoning behind my own silence on the topic. I guess that’s why we’re a good team, really. 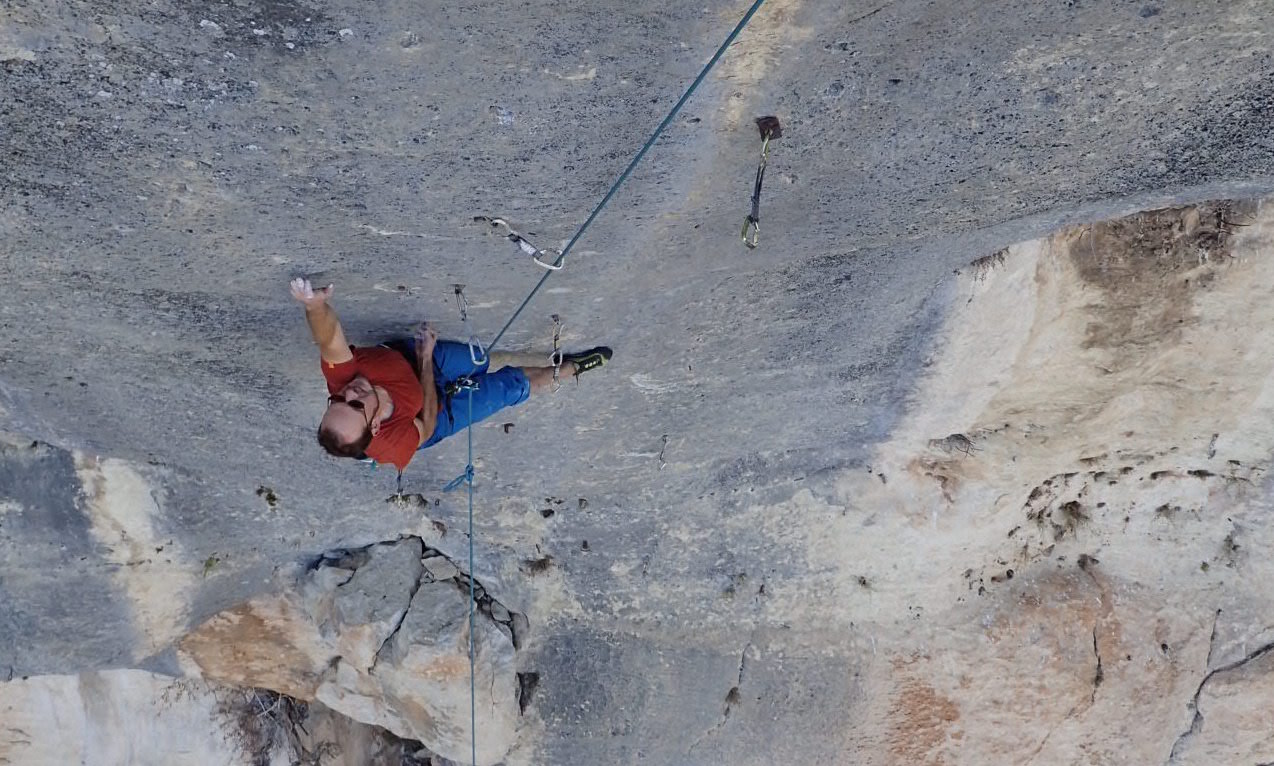 Photo: The author Frothy Tomson taken by climbing partner Steven.
​Now we’re almost halfway up, and the route gets extremely steep. This is good, because now I’ll warm-up properly, and though the grades are rapidly increasing, the holds are getting bigger, which is a definite advantage for frozen fingers. Suddenly juggy tufas appear, and steep cranking on pockets harkens a welcome return to conventional Verdon climbing.  The pitches fly by. Somehow I’m cruising my leads despite the difficulty and the untrafficked nature of the route. The sucking void below no longer feels like it’s pulling me down, rather, it’s become the instigator that sets me free of my constraints, with the biting cold joining the fray to make me feel alive.

Somehow I fluke the onsight of the crux pitch, folding myself like a contortionist into moves that my praying-mantis-like physiology isn’t designed to accommodate. It’s an excellent pitch, with just the right amount of burliness, technicality, and heart-stopping runouts, but success cannot be savoured as the overriding imperative continues to rule the day: push on, push on, push on.

Nearing the top, elation is quickly replaced with trepidation, as the last vestiges of the sun quickly vanish over the back of the ridgeline, signalling the arrival of night. Though we both have headlamps, I’ve heard that finding the top anchors to abseil back to the ground is extremely difficult, and I really don’t want to be doing it in the dark. With a single pitch remaining, I launch up it like a speedclimber, and succeed only in blowing my onsight by falling off halfway up, my hubris – opting to climb in the alpine gear while wearing the pack rather than waste time slimming down -  being my undoing.

Pulling back on I manage only a few more moves before falling off again. I guess the cold has worn me out more than I expected… or maybe I’m just getting old. Throwing myself at the crux I surmount it, and soon the two of us are on the summit, coiling ropes like men possessed.
​
And now I am running – literally running -  along the clifftop, looking for any tell-tale signs of an anchor, even as my partner trails in my wake, bowed-down beneath the vast majority of our gear. The anchor manifests from the gloom even as the sun disappears entirely, being in a decidedly obvious location for a rap down the entire route, and no great feat to locate. I’m not sure what the other climbers are talking about when they warned me of it.

The abseil goes as smoothly as abseils in the Verdon Gorge tend to: lots of pitches, and one inevitable rope-snagging epic (this time caught in a cluster of spikey bushes on one particular pull), but this is not unexpected, and we’re equipped to deal with it.
​
It’s been dark for some time when we touch terra firma again, and our trek back down the hillside and across the river is against the backdrop of night-animals making themselves known, and a gentle accompaniment of falling snow. Our rental car appears, and soon we’re back at our moderately dodgy campsite, tucked away in a miscellaneous forest, eating our usual fare of pasta and vegetables, washed down with the cheap (and frankly disgusting) red wine that a homeless Frenchman somehow convinced me was worth buying.

We don’t talk about the day, solely because we don’t need to. We were both there to experience it, and know what it encompassed in every respect. And, even as the colour of the day - and indeed the trip - begins to fade back into the greys of everyday mundane life, the soul-nourishing adventure and the enlivening suffering it embodied continues to provide sustenance that will sustain me… at least until the next such outing. And make no mistake, I remember every aspect of it as if it was yesterday. This is why I climb.