The Migrant Pom on Rysavy Ridge

By Tony McKenny
(Above photo of Mt. Roland in the mist by Domhnall Brannigan)
Editor's Note: The Migrant Pom on Rysavy Ridge was originally published in 1978 in the (now defunct) Australian magazine "Thrutch" and in the "History of Climbing in Tasmania" (2019). Common Climber has been given permission to republish the article as part of a three article series about the Ridge. These stories take us from the first ascent of the rock by Tony McKenny (this article), to two ascents this year in 2021:  A long-awaited first-time ascent by Keith Bell (Throng of Roland) and the likely final ascent of the ridge that Tony McKenny will do in his lifetime (Fast Forward…Rysavy Ridge Revisited).  Read all three to gain some wonderful perspectives of this place.

​Editor's Note on Terminology: Pom is short for the word Pommie, which is slang for a Brit or someone from Great Britain. The author, Tony McKenny is originally from Britain and, at the time of this writing (1978), had just relocated to Tasmania. For those who are not traditional climbers, hexes are references to types of passive protection. Tubes are also a form of passive protection, but here they refer to beers. Ocker refers to a rough Australian bloke.
"The Pom’s piked out" mutters Big John with great tact as an ignominious retreat is sounded. There is little alternative but to join Steve and Woody on an insignificant ridge around the corner. Surplus gear is dumped and a rapid solo started in pursuit. The climbing is interesting but easy, on firm conglomerate, a rock similar to vertical concrete but with boulders and large pebbles in the aggregate. Pulling over a steep wall, however, the view, and the atmosphere, changes abruptly.

Above, the ridge steepens, sweeping upwards to the dazzling blue sky, changing into a soaring sharp-edged arete with massive exposure dropping away on each side.

Rope length follows rope length until there are the others, resting in the shade of a small gum on an even smaller ledge. "Good-aye, where are the tubes?" A long silence as it gradually dawns on the panicking Pom that he has left them, along with the food, at the bottom. A frantic search reveals just one can (thankfully warm), the equivalent of a death sentence to an average Aussie and to this lot, with the temperature well into the 30's, sufficient excuse for murder. 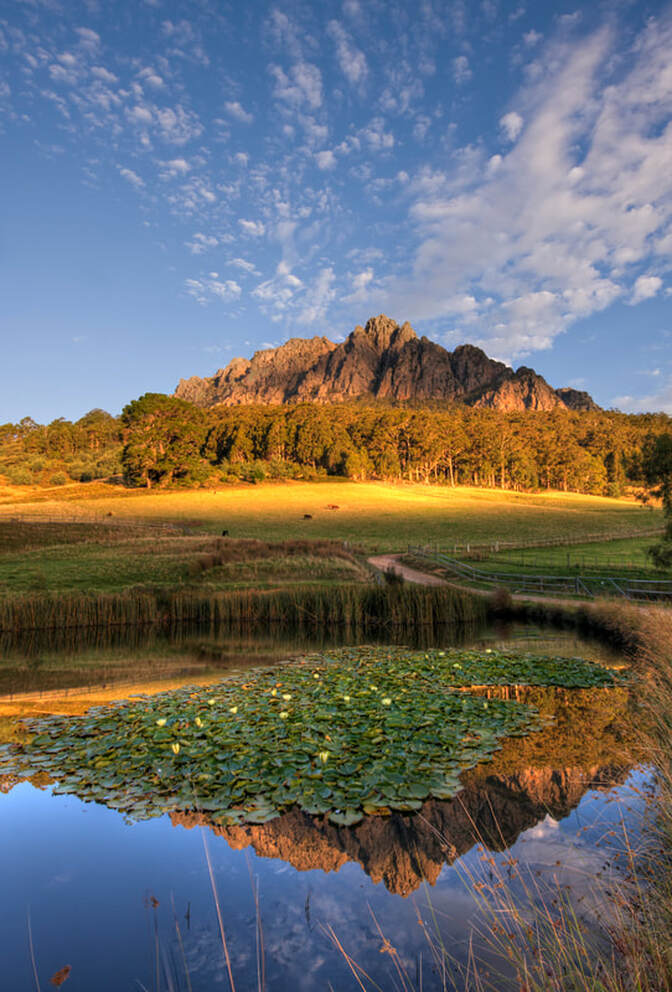 Mt. Roland and the Tasmanian countryside (Photo credit Domhnall Brannigan)
On upwards quickly. The view is opening out with the blue of the Bass Strait, which separates this afterthought from the continent, clearly visible over the rolling miles of tinder dry bush. A plume of smoke drifts over the small country town of Sheffield from yet another bushfire and power boats leave tiny white trails on the sparkling waters of Lake Barrington, mocking the dehydrated climbers. Steve, in shorts, is envied by the others but not by the blistering Pom who can feel his winter-white British skin burning in the fierce sun. The rock is actually hot to touch and dry – imagine that, climbing on dry rock. Unheard of.

The Pom is quiet. He has never seen so much unclimbed rock in his life and the experience is nearly religious. Nor can he get used to the absence of people and noise, no traffic roaring up the pass after a drunken session in the Vaynol Arms, no climbers squabbling at the foot of a climb about who has the best excuse not to lead. It all takes a bit of getting used to.

The climbing is not too hard, but it is steep, and route finding is technical and complicated. A long jam crack, steep walls, a swing out over thin air on a hand traverse and then a stance out on the very lip of space with a few hundred metres of space beneath your heels. Two metres (6 foot 4 inches in old money) of ocker climbs past to lead the final pitch, a lonely contemplation of the inability of man to fly in an emergency and then a whoop of triumph from above. Minutes later the party is together and sharing both the sweet delights of success and that one remaining can of beer.

Mt. Roland hasn’t finished with us yet though. Separating the arête from the main ridge is a classic knife edge straight out of the text books. One by one the party straddles across to the safety of the gendarme on the other side. Clip into the rope and slide away from all the traumas. Six, or was it seven, long abseils later the gully floor is reached, and the race is on for the juice and beer left at the foot of the climb. Inexplicably the Pom seems to have been left to coil the ropes as the others hurtle down in the gathering gloom and unfortunately the liquid has been finished by the time he rejoins the group. An oversight he is assured, nothing more.

Later in the bar, when dehydrated body cells are at least partly refilled, some sort of assessment of the route can be made. A superb classic without doubt, all 420m of it, and the Pom can assert, finer than any of its grade he has done in the UK. But what of the crags nearby, the Devils Gullet, three kilometres of unclimbed dolerite, the Western Tiers, endless sea cliffs… the Migrant Pom curls up happily in the corner, overcome by the mixture of cultural shock, jet lag and a surfeit of tubes.  I think I’m going to like it here.
​
Rysavy Ridge, Mt Roland. 420m   Grade 12   February 1977
​First Ascentionists: 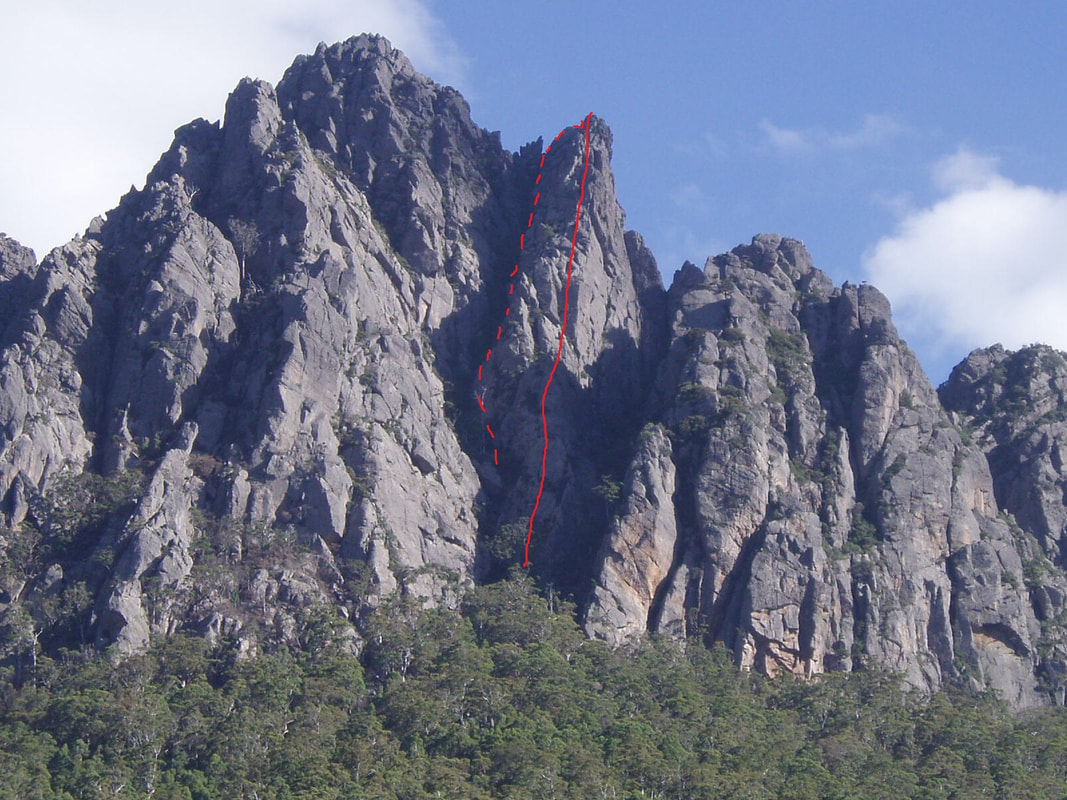 Rysavy Ridge on Mt. Roland in Tasmania, Australia. The ascent route is in solid red and the decent route is red dashes. (Photo Credit: Tony McKenny)