By Stuart Williams
Ramone was the best. He had repeated all the hardest climbs, most of them without a rope. All he wanted was a new-route, but there were none. The year was 2166 and a decent route hadn’t been put up since the Donny Jawes era ended fifty years earlier. Donny Jawes was "the last pioneer" and his technique ‘symbiosis’ completely changed the face of climbing. In fifteen golden years the world scale was pushed from 44 to 61, and in that time he and his disciples more or less climbed out the world.

Symbiosis was more of an attitude than a technique, where rather than battle against the rock and gravity, you harnessed the power within the stone until, quite simply, your ascent became the next logical step in the stone’s history.  Typically an ascent began with a long preparation to focus the mind on the stone, not on climbing the stone, but understanding its story – from grains of sand on an ancient seabed through to this morning’s wind erosion. Depending on the climb and the climber the preparation could take anywhere between a few minutes and a lifetime, but when the desired state of "sympathetic resonance" with the stone was achieved, the climber’s timeline became swept up with the stone’s, and to the best practitioners, the moves became their destiny.

Ramone’s great achievement was that he had eliminated the undercling from Hen Boon’s "Mubble," and in doing so created the world’s first 62. However, with hindsight Ramone found this so contrived that he wished he’d never done it. Far from being an inspiration, the world’s hardest route was an embarrassment, and Ramone was responsible.
“Not much I s’pose,” the old man mumbled lazily, “just I used to climb a bit…ooh…not f’fifty years now, an’ I saw ya’ here lookin’ alone - just thought I’d come’n find out what you boys ha’been up tah’.”

Ramone took a long draught from his beer, motioned for two more, his withered friend slurping greedily as Ramone spat, “Nothing, I mean it, nothing has been done for fifty years. There is nothing more for climbers to do.”

The old man finished his drink, his moist lower lip sucked his beard froth dry and thanked Ramone for his generosity.

“I’m not being generous. I just don’t care.”

Laughing the old man’s eyes twinkled,  “Y’know you remind me of ol’ Donny.”

Ramone almost choked on his bromide, “You knew Donny Jawes!”

“What! Wha’d’ya mean? I thought nobody knew nothing!” Ramone shouted, this piece of gossip rekindling the dormant fire of his youth.

Yes, the old man did know Donny, and he also knew the story of his disappearance, “Donny was a strange’un,” he reminisced, “always wantin’ more.”

“A thousand routes bear his name, all harder than 40! How could he possibly want more?”

“He wanted GOD and couldn’t hav’im!” yelled the grey beard and wrinkled forehead. “Then one day he came to me an’ told me ‘bout the last climb. Me of all people! He knew I hated all that vainglory! Made me swear never to seek nor find’im.”

That night Ramone learned many things about the so-called ‘Golden Years’ of climbing - gossip, innuendo, backstabbing and worse; all the things that sickened the old man and made him a recluse from the climbing world. He learned about Donny, how “the leaches sucked’im dry”, but most of all he learnt the location of the last climb. Ramone was so accustomed to disappointment, that as he staggered home his initial excitement gave way to uncertainty, and he became convinced that this apparent luck was actually his final torment. Within a cloud of drink and disbelief our hero drifted off to sleep, the final words of the old man throbbing in his head,

Ramone woke early with a clear head, a miracle considering how much he and the old man had drunk. His confusion had turned to anger, all he wanted was one climb, but he was robbed, robbed by history, and robbed by Donny “always wantin’ more.” All that didn’t matter now because, if the old man spoke the truth, there was one last unclimbed route for Ramone. He was out of shape and, more importantly, out of mind, but the amount of immortality commensurate with succeeding on a route that Donny had failed on was too much, even for tired old Ramone.

Mechanically he breakfasted, walked to his car, and drove to the north of England. Arriving late he parked and walked the overgrown path of which the old man spoke. As instructed, Ramone broke from the path at a river and headed upstream into a thick wilderness. Two hours before sunset, on the verge of giving up, he saw it - a black overhanging arête, glistening gold in the setting sun. The only rock for miles, exactly as the old man described.

As Ramone approached three things became clear: the climb was hard, the climb was unbelievably good - and Donny was dead. His boots lay at the base of the climb, a few metres away from his bleached bones lying face first in the dust.

Death was nothing to Ramone as he prepared for the ascent. Donny’s technique ‘symbiosis’ required a clear head to achieve sympathetic resonance with the stone - Ramone’s mind had never been clearer. In the crisp evening air he started, naked apart from his boots, the fading sunshafts lightly danced the stone and warmed his fingers and heart.

Milking a faint ripple on the left side of the arête was the key to the first gently overhanging section. It wasn’t too hard, 47 maybe, but required a cool head. One slip and it’d be a slow motion barndoor and plummet. The angle kicked back and the climbing became more brutal. Eventually the ripple faded leaving no choice but a committing blind move to the right side of the arête; the type of move nearly impossible without symbiosis. Mind and rock one he dynoed. The blind hold was better than he imagined. Ramone’s synthesis with the stone was perfect as he effortlessly linked a string of unreadable moves. Gradually the arête curved rightwards and the angle and difficulty decreased. Resting briefly on a grade 37 slab, and with the climb almost over, his mind began to wander, sure the section below was hard, but not more than 56, and this was easily within Donny’s capabilities. With only a short traverse and final roof before achieving his life’s obsession he felt ghostly empty. It didn’t seem right that he should fulfil his dream so easily, on the back of an uncharacteristic mistake by Donny. But this was only for a moment, and looking down on the boots of the last pioneer he chuckled, “Not much use to him now,” and started the traverse.

Under the final roof while calmly shaking out on a shiny spike, Ramone was overcome with the nauseous feeling that he was being watched. He looked up and beheld the unmistakable features of GOD. For the first time in his entire career he experienced the cold sweat and clammy hands of fear, and in his panic his symbiotic bond with stone broke, his feet slipped, and he nearly joined Donny as he struggled and flapped back to the rest.

It required no small effort to regain his composure and clear his mind, but when he did the solution was obvious. There was no trick involved, just commitment, total commitment. Retreat was not an option.

Slowly and deliberately he unlaced his boots and dropped them to the ground beside Donny’s. Moving with purpose, he returned to the spike below GOD, placed his left palm out wide on the undercling and twisted up on the spike. His back almost completely to the rock he could just get the sole of his right foot on the spike. Knowing what was required, he took a deep breath, and pushed his bare foot into the spike. A burst of pain signalled that he’d broken flesh, and with each succeeding wave of pain he pushed harder. With the spike firmly embedded in flesh and bone there was just enough support for him to release his right hand and bring it onto the sloper. The move was far from complete; he still had to get his left foot up. There was no doubt he could move it, all his weight was braced between his left hand and his mangled right foot; the problem was dealing with the pain, and he had to move fast before the spike completely severed his foot. A dull moan echoed across the valley as Ramone pushed with all his might and lifted his left foot to the roof behind his sagging buttocks. The pain was exquisite and Ramone kept pushing, until finally, like pulling on a new pair of climbing slippers, his back popped into place and he was done. He ticked GOD.

At last he could relax, with his body cocked in perfect diagonal opposition there was no need to push nor pull - he literally could not move. Suspended over the valley, strangely left untouched by generations of conquering humans, Ramone felt the calm he had searched for all his life. It was beautiful, and in the last minutes of day, light streamed into his man-cave. As he looked about his perch and at his body, perfectly locked in place, something caught his eye near his left hand. If he could have moved, he would have jumped. Just to the right of his index finger there was written, no doubt in Donny’s blood, “I DID IT,” and underneath the initial, “D.”

To Ramone looking down at Donny’s bones, those words seemed so childish. The climb was not Donny’s, it was his­­­­ - at least for the moment - and in time it would be somebody else’s. Looking again into the silence, he understood the meaning of the old man’s words. He and Donny were the same, Donny wanted more routes, and Ramone wanted one; both quests were pure vanity. Donny understood, only he realised too late to scrub out his final hollow claim on the stone - the stone whose claim on immortality is equally futile as a human’s claim on the stone. No, he Ramone, the first of the last would not take part in history’s vanity. He would erase it.

Donny’s bones glowed approval in the moonlight, as Ramone with his last living breath started scratching at the rock. With his finger now bloody, he finished Donny’s inscription, and just to the left of Donny’s ‘D’, he added…G…O… 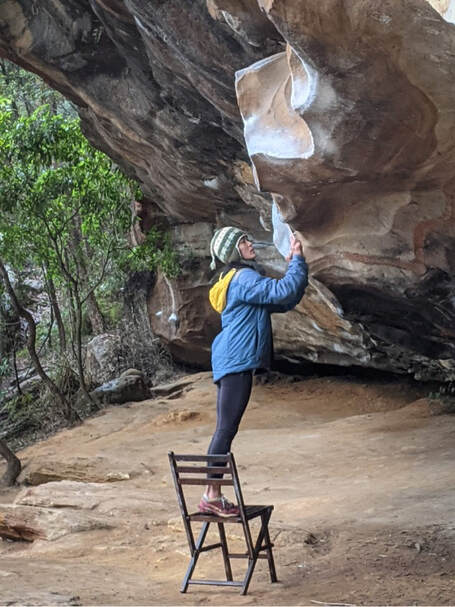