Claiming a Space on the Mountain

By Wayne Branch
The drive from Ogden, Utah to RMI Guides in Ashford, Washington is roughly 12 ½ hours and nearly 800 miles. I had been anticipating this drive for years. I couldn’t pinpoint the exact moment I decided to someday climb Mt. Rainier, but I feel as if it has always been in my mind and heart since I tied my first figure eight.

During the late 90’s I had my first climbing experience when some Caucasian friends invited me to go bouldering back in Berkley, California. I hesitated, made lame excuses for not going, but I always knew the truth - I was afraid of being the only black person. I was afraid of failure. I was afraid of what stereotypical expectations would be placed on me. But, I learned long ago you can’t let others expectations of you shape the expectations you have of yourself. 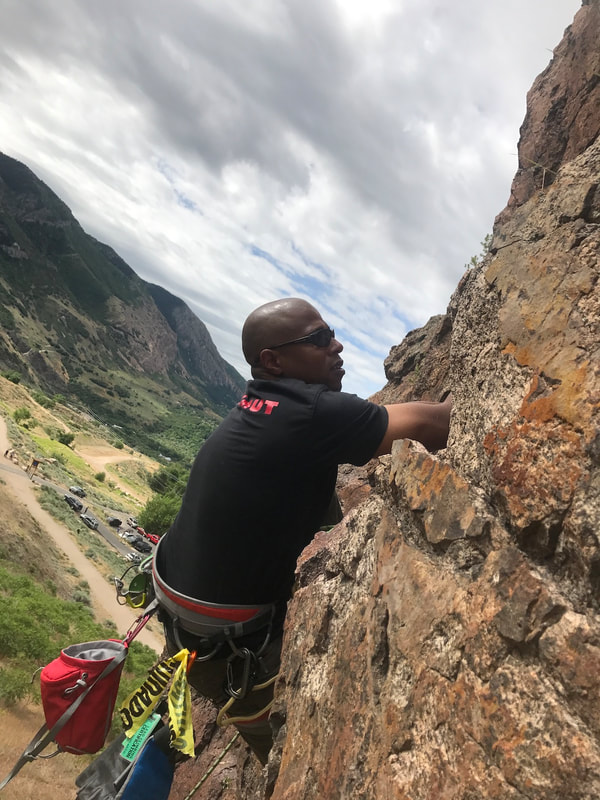 The author, Wayne Branch, climbing in his home state of Utah.
​I knew Rainier would be my greatest challenge yet, but I had trained hard all year long and felt my fittest ever. During orientation I met my fellow team members and team Guides. Everyone was friendly for the most part, but there’s always that one. During every expedition skills practice this man constantly felt the need to question my methods. And, he continuously interrupted me when I was talking to someone else - until one of the guides cut him off mid sentence. Solveig told him, “Hey! We are the guides here, not you. Honestly you have a way to go to catch up to Wayne, so focus on your own skills.”

As much as I hate to admit it, this is something I’ve come to expect. Due to the nature of climbing it’s natural to question the skill set of a new climbing partner. But, when I clearly see the difference between the way I am treated versus how my climbing partner is treated, it leaves very little room for interpretation. What these people don’t realize is, that despite all their efforts to conceal it, their prejudice shows. They will attempt to be cordial or neutral in their words, but their actions will contradict them - ultimately projecting their own worries on someone who doesn’t deserve it.

For the next few days, I was a sponge, soaking up every word and participating in every hands-on opportunity during this trip. When I originally signed up for for Rainier, I had no idea who my guides would be. But during introductions on the first day, I was awe struck. Our guides would be Billy Nugent, Megan Budge, Chase Nelson, Solveig Waterfall and Dave Hahn. Billy, Solveig and Dave all have over a hundred Mt. Rainier summits and a few dozen Everest trips. I was witness to the mixing of old school mountaineering toughness and new era techniques. 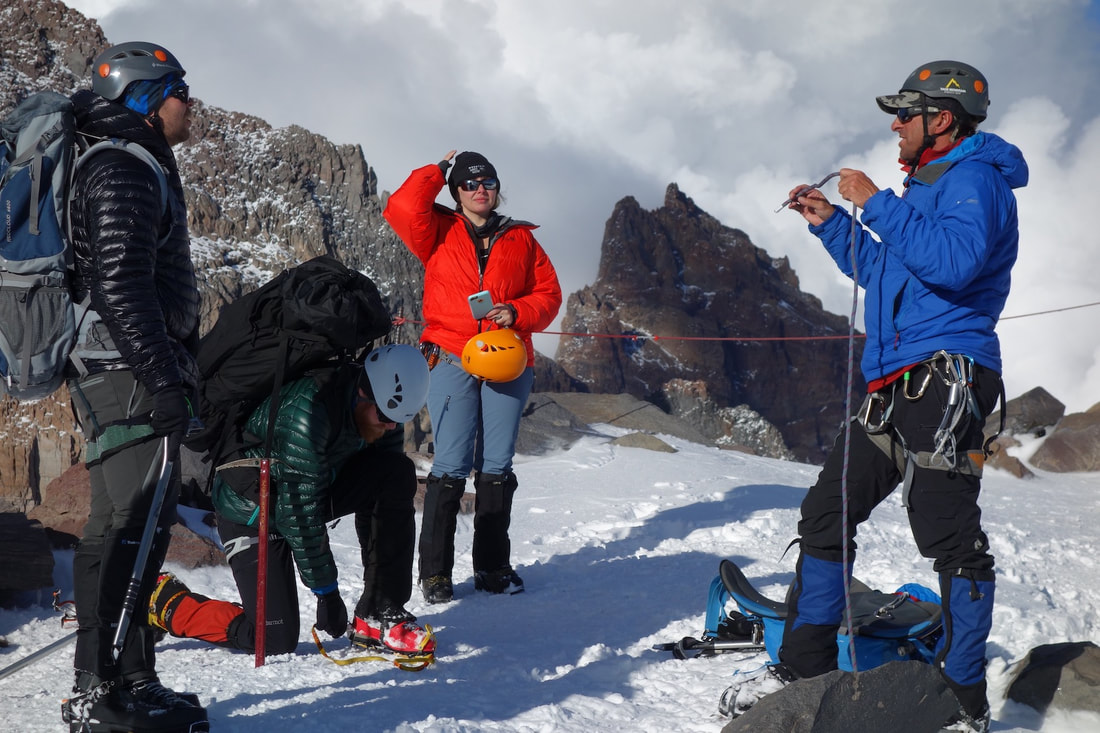 On the day before our summit attempt the teams were split into three groups of five. When I found out I would be in the lead team with Dave Hahn, I somehow felt vindicated. As a person of color that lives and climb in Utah, where roughly 78% of the population is white, I don’t always feel welcomed or that I belong. I’ve gone on climbing trips and been the only person of color for weeks. When I’m in a hyper-sensitive state of mind, the feelings of loneliness and isolation can be depressing. But then I have to focus on why I’m there - the camaraderie of good friends, to achieve a specific climbing goal, or simply for the adventure itself.

We set out for the summit in the early hours before the sun came up. Before heading out, the leads informed us that late-season summits are sporadic. I didn’t care about any of that; I just needed to throw my whole being into something.

The previous 3 teams did not summit due to avalanche danger. Our team made it farther than any of the others, but had to turn back roughly 1.5 miles from the summit (which I appreciated because my personal danger radar was starting to go into the red.) The rest of the day was used to refresh and practice our alpine skills. The following morning we’d be hiking out. 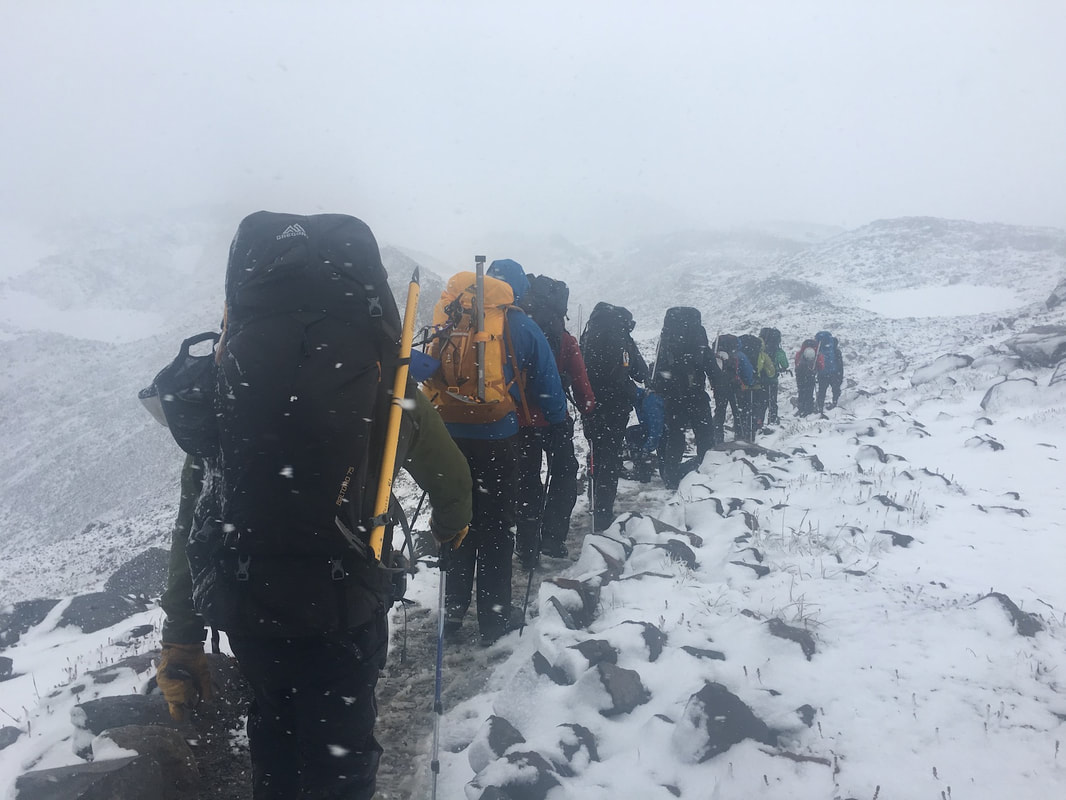 The morning welcomed us with a deluge of cold rain, ice, snow and sideways blowing wind. By the time we reached the trailhead there wasn’t a dry stitch of clothing between all 15 of us. And yet, I was still excited by everything that had transpired over the last week.

There’s a clarity of mind that happens on these types of trips. Whenever I spend an extend period of time living off of what’s only in my backpack, it reminds me of all the extra baggage we carry around in our everyday lives. Sometimes I struggle to adjust back to my regular life. The small talk and electronic distractions seem meaningless for a few days. It’s like I’m trying to remember how to interact with people.

​Spending some time at home with my family anchors me back to this existence and before I know it, I’m already planning my next climbing trip.
My climbing life has had a dozen or more racial experiences like the one that occurred on Rainier. But, I throw those incidents into the same category as taking a big fall. I could let the doubt creep into my psyche and prevent me from climbing again or I can move past the fear. Because, in the end, that’s exactly what it is to feel prejudice laid upon you. There is a fear of living up to those perceived stereotypes or simply having your character judged based on skin color.

I think people underestimate the mental fortitude it takes to claim a space in an environment that sees your presence as an abnormality. The increased numbers of people of color climbing in the last few years has gone a long way to change that perception. Being in Utah, I choose to accept the role of being an ambassador for people of color that climb. So, if you ever run into me out at some crag don’t be shy - let's talk and climb. 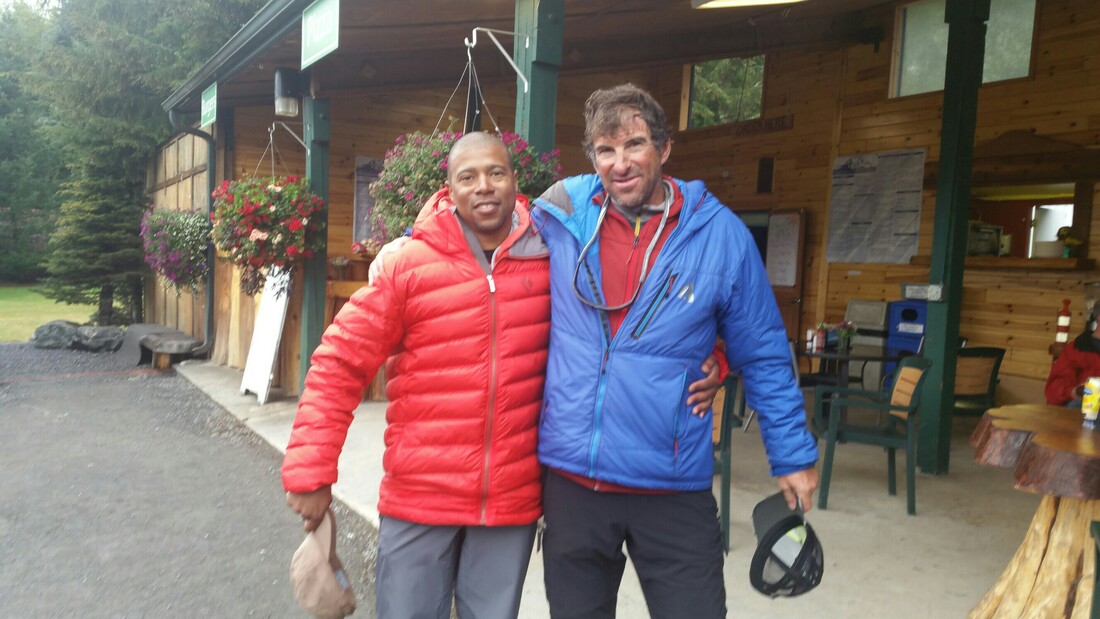 Check out more of the "Honoring Diversity" edition.