Above: Dennis Bach on Ale 8 at the Red River Gorge (Photo Credit: Tiffany Nardico)
You began your visual arts work in merchandizing for women’s apparel, now you partake in and photograph the three “Action C’s” climbing, canyoneering, and caving. Tell us about that shift. 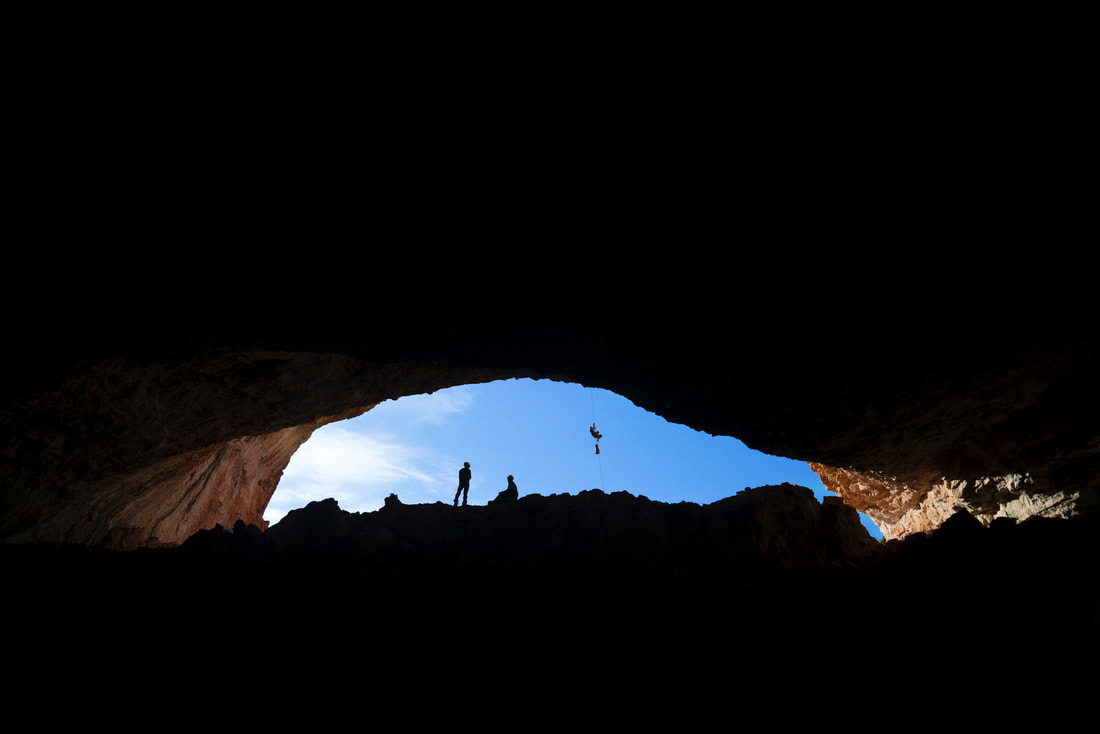 Exiting the Doublebopper Cave (Photo Credit: Tiffany Nardico)
In 2018 you helped photograph the expedition to the deepest known cave system in the Western Hemisphere (Proyecto Espeleologico Sistema Huautla Expedition) and were trapped in there for 7 days with the team. What happened and how did that experience shape you?

Huautla was my first introduction into the United States Deep Caving team. I had documented several caving expeditions until this point, but never had I explored deep-cave systems or camped underground.

I was asked by Steve Gladieux, who arranged a trip to Camp 4, to be the first photographer to make it to the bottom of the deepest cave on the western hemisphere (700 meters below surface).  We packed our drills, ropes, mapping equipment, food, sleeping bags, and camera gear in our expedition bags to carry through vertically demanding passage for a seven-day camp trip. The objective was to explore domes by means of aid climbing and map an unexplored passage.

Little did we know that we would be graced with floodwaters from unusual monsoon weather on the surface. What was supposed to be a fifty-foot swim with one foot of air was now three meters below water with our team on the other side.

There was a little flaw in our camp plans, we had an expedition member scheduled to send down food the following day. For the remainder of time underground, we rationed on Cliff bars and jerky to make our servings last.

There was one sense of relief. The waterfall by camp gave us a sense of the flow going through the system. Each day the water subsided and through investigation we were able to determine when would be a good time to make the grand escape. Just as we packed our bags and began making our way to the surface, Fernando Hernandez came around the corner for a rescue to warn us of further weather warnings and help us make it out safe.

This was probably the most memorable first cave camp trip in history. What I learned from this experience is always follow your passions in life. Any day can be your day, but at least go out living the life you are passionate about. Despite this experience, I went back to the same camp the following year with lots of camp snacks this time.

This story was also featured in National Geographic. 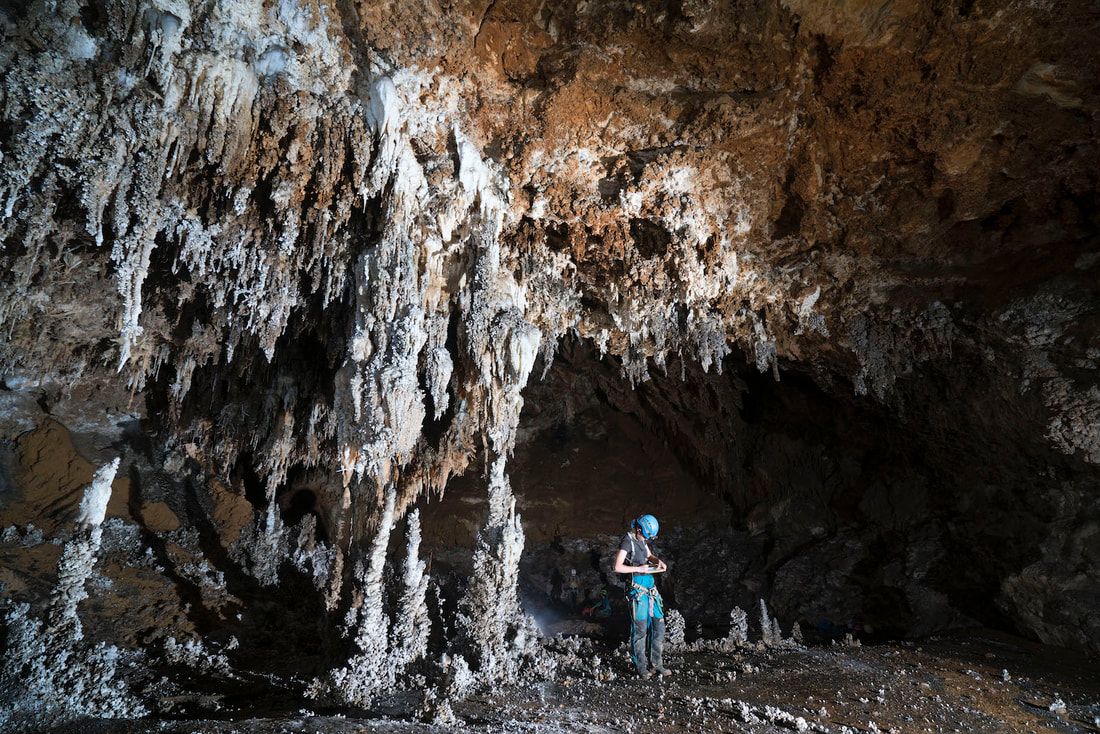 Making sketches during the Huaulta caving expedition. Huaulta is currently the deepest known cave system in North America (it's located in Mexico) (Photo Credit: Tiffany Nardico)
Who are you as a rock climber?

My twin sister introduced me to rock climbing six years ago. At first, I didn’t have much interest in the sport, but only because the learning curve was so steep. Eventually I discovered my home gym, Hanger 18 in Long Beach, and began to connect with a community of climbers who’s motivation encouraged me to take it further.

It wasn’t until my first trip to Red River Gorge, fall 2017, where I truly learned how to become a rock climber. This is where I discovered sending a route and surrounded myself by strong climbers from all around the world.

Climbing for me is a great way to maintain my fitness for expeditions. I am known to carry the heaviest pack to the crag, fully equipped with camera equipment - just in case a photo opportunity presents itself. My friends always make fun of me because from behind I look like a pack with legs. Doesn’t help that I am 5’1’’.

Climbing also provides me with a sense of accomplishment. It took some time for me to overcome the mental aspect of taking whips while on lead. Eventually, I whipped so much that I became familiar with the butterflies, then the fear of falling moved to the back of my mind.

It is great to start the season with a goal and to exceed that goal by a long shot. I think many can agree that by achieving these goals it helps evoke confidence in other areas of my life. Especially when those goals can sometimes feel so out of reach and you surprise yourself by this achievement.
You are currently living on the road, out of your van. How long have you been doing that? What compelled you to vanlife? And, how is vanlife treating you?

When I was going to school for photography, I knew the only way I would be able to fully invest myself as an adventure photographer would be to hit the road. There was only so much I could learn from the classroom, but the rest would be from experience, network, trial and error, mentors and dragging my camera into the deep depths of the mountains.

And thus began the era of "Prius-life." Exactly four years ago I moved all my canyoneering, caving, climbing, and camera gear into my Toyota Prius with the intent to shoot as much as I could from the road. I found it to be very cost efficient and even inspired others to begin their own nomadic Prius adventure.

Eventually it only made sense to make the transition from a Prius to a Dodge Ram Promaster. After some time traveling on the road, I found it valuable to have a space where you can move around when the weather isn’t favorable outside. I chase the seasons for photographic projects, which means one season I could be on the west coast and the next on the east coast. The van gives me the flexibility to be anywhere.

I love living in a tiny home. Everything you need is always with you no matter where you go. It is my favorite hosting dinners in my van and seeing how many people I can shove into a tiny space. 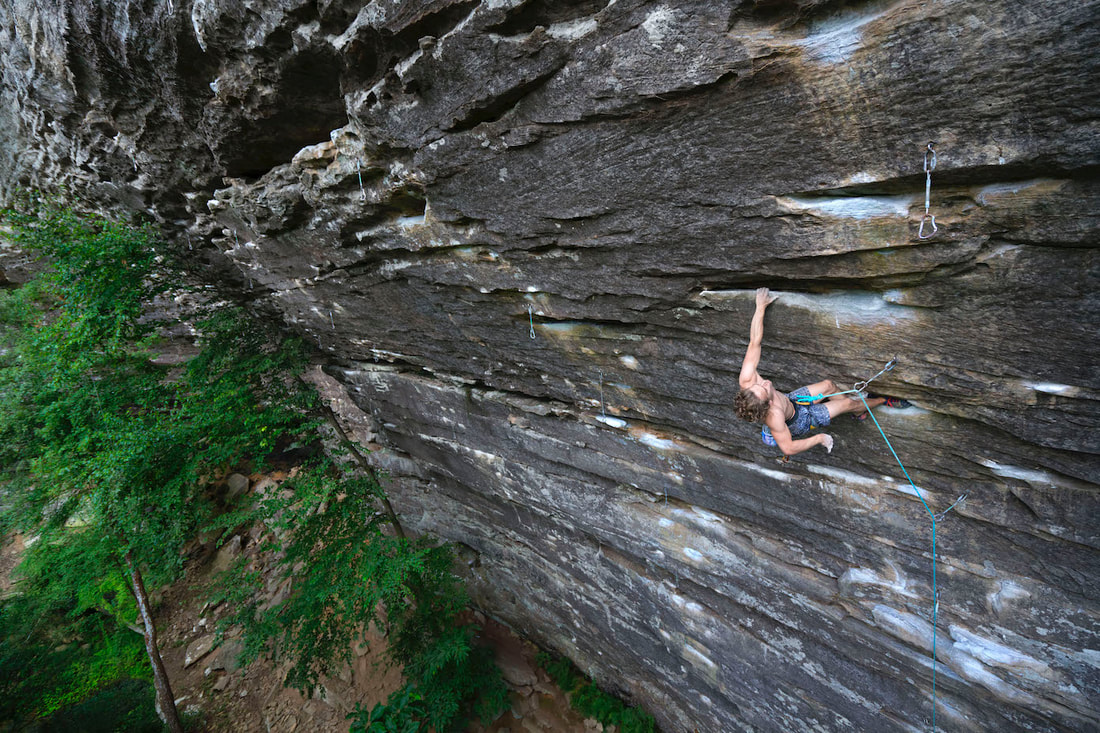 Every time I enter a new climbing destination, I am faced with a series of challenges to work around. Red River Gorge is iconic for its towering overhung walls with long pumpy routes. You’ll commonly hear climbers say, “the biggest jugs you’ll ever fall off of”.

I wouldn’t say the lighting and trees are my biggest challenge when it comes to shooting in this area. Most of the time the crag will be in the shade at different times of the day, and the guidebook is an easy reference for planning photo-shoots. I usually prefer to shoot in the shade for even lighting unless the sun is working in my favor for an image. In that case, I would always choose early morning or late evening sunlight, which is best for maintaining highlight detail.

My biggest challenge in the Red is placing myself in the right spot to capture climbers. There are a lot of decisions I make before taking a photograph. Where to rig the line? Will it be an environmental image or close-up? Where is the crux of the climb? What way will the climber primarily be facing? How will I get my rope on the anchor? Where is the light coming from? How am I drawing attention to the climber? What am I communicating with this image?

It is never a bad idea to scout a location first. I did this recently for a shoot on Pure Imagination 5.14c with Annie Chouinard. We first rigged on an anchor to the left of the climb and after jugging rope I discovered it to be too far away. I then cleaned that anchor and stick clipped my way up Pure Imagination, which was the most favorable angle for that route. Sometimes you don’t know if its right until you try it.

When shooting climbers, I try to decide first what kind of image I am going for. Is this going to be more about the scale of the environment or am I going to show the tiny crimps that some very unfortunate fingertips have to hang on to.

With a world-class climbing destination, it is easy to get away with having another climber haul your photo line to the anchor. Otherwise I would hike above the cliffs and rig an anchor to rappel to the anchor of the climb or stick clip my way up the route.

I then place myself where the crux of the route will be. I find the less you move on rope the higher chance you get at capturing quality images. This is especially true in Red River Gorge, where most likely you’ll be free hanging in space and possibly fighting the wind while spinning on rope. This is also why I favor walking down my ascenders rather then rappelling to lower. Any descender that creates a bite to rappel will add a twist in the rope resulting in more spinning.

Lastly, if the climber is not wearing colors then at least go bear bones. Contrast in color is a great way to draw attention to climbers especially when shooting wide landscapes. If they decided to wear a black t-shirt then I ask them to take it off. 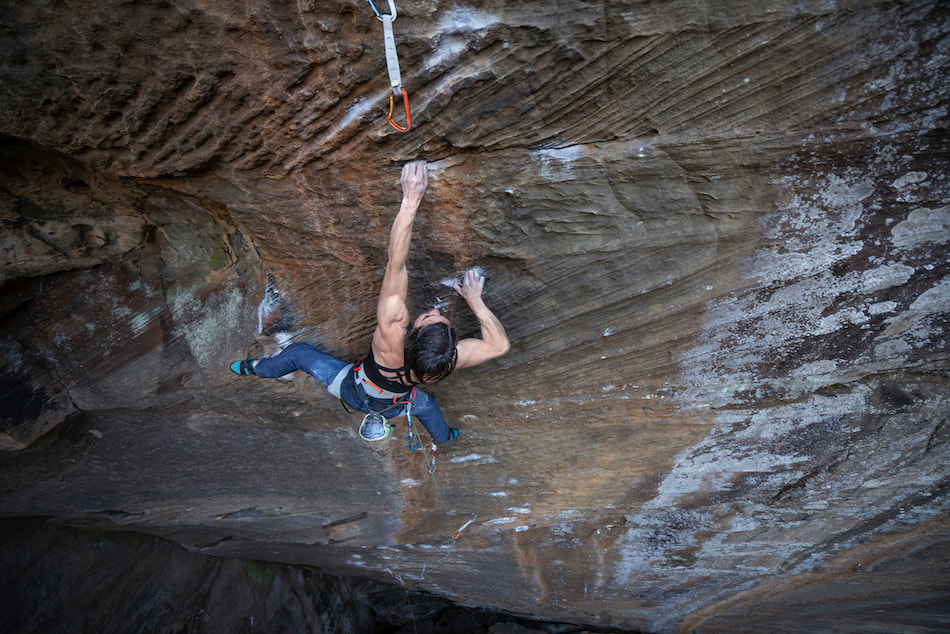 (Photo Credit: Tiffany Nardico)
Do you have a favorite area to climb in? How about photograph climbing? Why?

I am completely obsessed with climbing at Red River Gorge, Kentucky. Not only do I love the sport climbing there, but it keeps you engaged with nature with its rolling hills of green that make up the gorge and the abundance of animal life from frogs, turtles, snakes, crawfish, and even Kentucky wild cats. Springtime is when everything comes to life with thousands of butterflies roaming around the day and thousands of fireflies lighting up the night. I often go to bed with my van doors open to listen to the symphony of courtship songs carried out by the frogs.

There is something about climbing in the Red River Gorge that is favorable to me. I love the pumpy overhung routes with sandstone that almost grips on to your shoe. The movement is almost like dancing on the wall, with each route unique to its own. The area is massive with enough routes to maintain a lifetime of projects and the community of climbers at Miguel’s Pizza (Climbers Campground) will eventually adopt you as family. 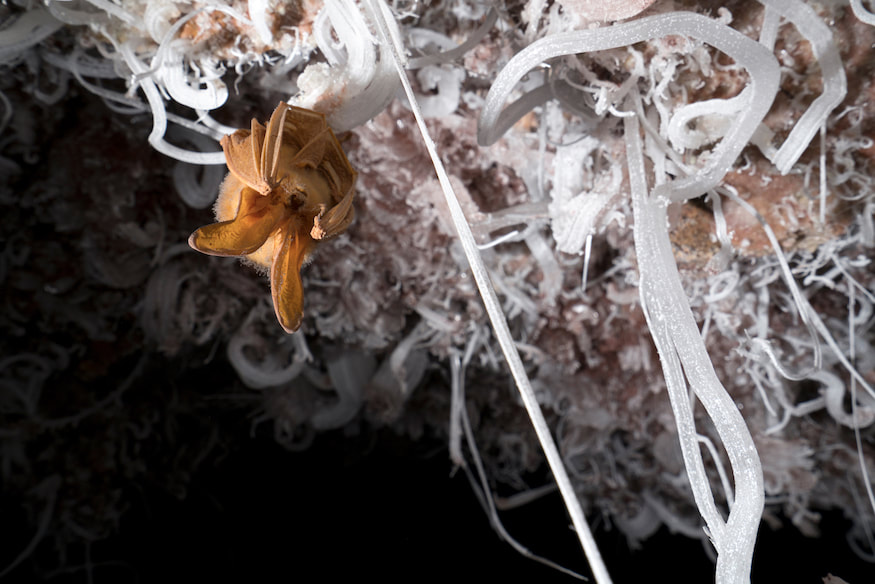 (Photo Credit: Tiffany Nardico)
What are your goals and visions for yourself?

My goal is to someday be the photographer behind the image for National Geographic, documenting exploration in caving, canyoneering, and climbing. It was browsing through those images behind the yellow cover that inspired me to be an adventure photographer to begin with.

Also, working with leading outdoor brands to collaborate on photo projects. I have endless stories through my travels for editorial and commercial use. I would love nothing more than to get these stories out to the world and inspire others with my visuals.

Most importantly, use photography as a means to give back to the outdoor community. I made the transition into adventure photography with the intent to make a difference in the world. This is why I am grateful for the collaboration with Climbers for Bat Conservation. I have the power to hold a voice and the more recognized I am as a photographer, the bigger voice I have.

Any special messages for climbers?

If you’re looking for professional photographs, wear bright colors! That favorite black or grey t-shirt will just blend into the background and old pap’s will have to pull out the magnify glass to find you. ​​​​​ 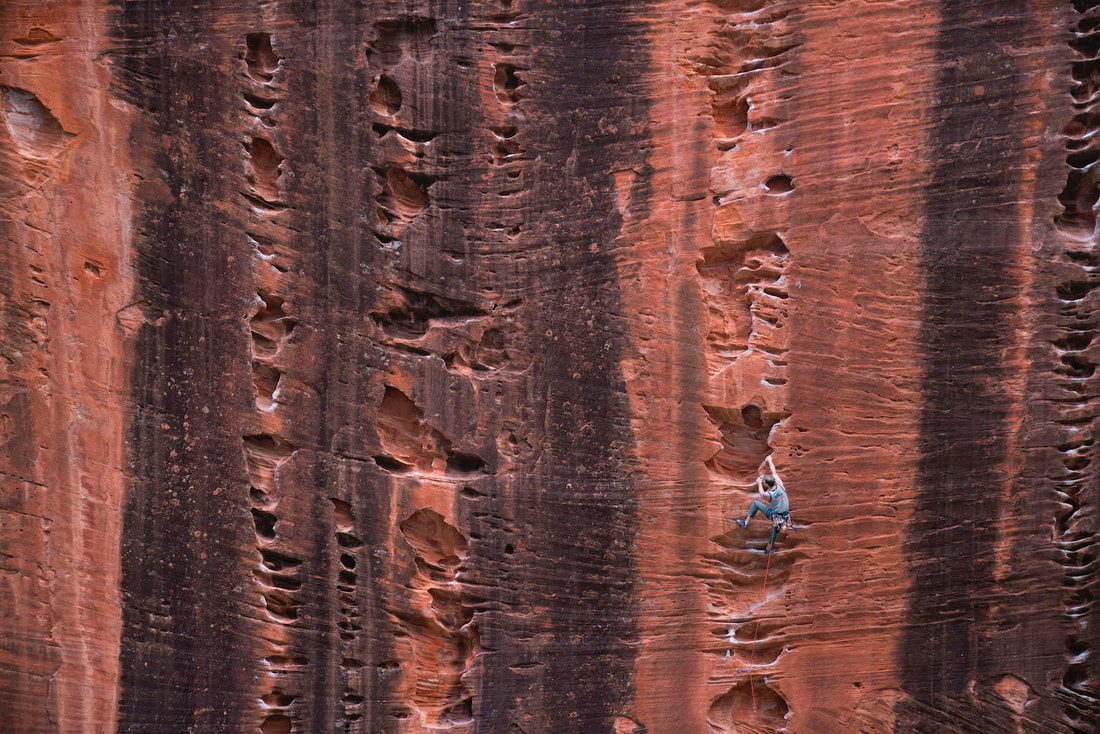