​Photos & Story By Derek DeBruin
The hatchback pummels through the darkness at illegal speeds toward home, where my wife and young son wait, likely asleep. I won’t be back tonight. I’ll have to find a place to crash. A place to sleep—not crash.

The music keeps me alive. The podcasts grew stale. The rural radio stations eventually faded to static. Pounding skank beats and power chords propel me forward, accentuated by throaty verses and screaming interludes. Azissa says, “It’s just angsty white guys yelling—badly—over loud guitar.” She’s not wrong. But she must see how this might drive me. The chorus interrupts my thoughts, mirroring my feelings:
I give up
I give in
I just want
This to end
I wish I was anywhere but here.
Don't give up
Don't give in
There's no peace
In the end
The war worth waging is right here.
I can barely grip the steering wheel, hands raw and forearms inflamed from two weeks of abrasive, cold, wet, hot, dry abuse. The headlights cast a pallor, the white and yellow lines glow. The shadows of peaks hulk in the periphery, a darker shade of navy than the night sky, blotting out the stars. It doesn’t matter where I am - the West Slope, northern Utah, fucking Amarillo - or where I’m leaving - the Tetons, Red Rock, the Valley - it’s always the same. But in this case, it’s southern Idaho en route from the Cascades. The road trip is intoxicating, for the same reason climbing has always inebriated me: the flow of the stone quiets all else.

The yelling changes to screaming, the blast beat thunders over the atonal chord progression.
Your signs say we're not good enough
Not cute enough, not smart enough
Not worth your love, out with the old
But this is bullshit, and it always was, and you know it.
If only the music is loud enough, it too will drown painful thoughts, the lyrics distracting me from my inner monologue. If I weren’t driving I’d be bludgeoning my shins with a rolling pin. Neither the song nor the road trip can last forever. The climbing done, the horizon separates me and the dashboard from the people that matter most, waiting on the other side. I need to get there, soon, which can’t be soon enough. I might not make it otherwise, alone as I am. The music reminds me: Everyone fights themselves. The battle in my mind is no different than keeping my head together at the crux. Bury the anxiety. Don't blow it.

The rear windows are cracked, rushing air channeling into the car, fueling the maelstrom, drying the wet gear, dispelling the stench of sweat and mildew and dirt and smoke and chalk - somewhere between unquestionably foul and simply the odor of human, albeit unbathed. None of it works; the thoughts come unbidden and unwelcome. Wind chill, angry lyrics, pulsing rhythms, groaning engine - all join the refrain: Just ‘cause you don't know that you're sexist, you don't get a pass when you're talking your shit.

None of this can separate me from the torment wrought by my own mind. Every time I drive alone at night I’m led to ruminate, memories that refuse to disappear.

It’s probably secondary trauma, classical conditioning left unresolved from the idealism of youth. Every Thursday night (or really, early Friday morning), I ended up at a local ER doing advocacy work for survivors. After hours of police reports, rape kits, irate boyfriends, victim blaming, slut shaming, doctor education, plan B and propranolol counseling, referrals, and new clothing, I’d point the car at my dorm room, suffocating in the same pounding thrash. I’d write a caffeine fueled report, doze, wake up just in time to fail a math exam, and head to the rock for the weekend, to escape. Midnight car rides are inextricably linked to rape. My chest heaves, deep, rapid, gulping respirations. I exhale slowly and forcefully, trying to regain control of my autonomic nervous system.
I won't be able to give you a ride to work
Because I sold the car to print consent zines
For every high school kid in the country.
If only that were enough to solve the problem.
The bridge intrudes, insisting its accord. Don't you remember when we were young, and we wanted to set the world on fire? I still am, and I still do.

Climbing taught me the stress inoculation I needed to confront the bastard cop who told me she deserved it. To stand in the path of the abusive boyfriend who coerced his way past the triage nurse. To counsel the mother, so confused and distraught and sad and overwhelmed it almost overwhelmed me: why had a developmentally delayed eleven-year-old raped his infant brother? This is for the peace we never had. How do we guard the door against your dad? How indeed? The danger is always close, intimate, so often conflated with notions of love, or what we think passes for love.

I grew more consumed with despair with each sleepless night at the hospital. But rage has always been lurking, bubbling toward the surface, the pressure building. That tool must not be misdirected. It has purpose, the edge of which must be honed. I refuse to run and I will die before I kneel.

There are more noble ways to spend my time, but I’m committed. I made climbing my career, a life’s work predicated on what most—even climbers—consider selfish. And yet. If they can do it there I can do it anywhere and I’ve no right to complain. Susan tells me, “The way you do it helps people; you don't realize it, but they need that community you build.” Ron mentions, “Climbing was the first time I really felt powerful. I didn't need that masculine bullshit anymore.” Jessica says, “Climbing is such a great way to teach resilience, communication, and trust.” They’re not wrong, but neither am I. What does it matter if there’s a racist route name? Or climbing doesn’t feel inclusive? Or it’s not accessible or some groups are underrepresented? Christ. One in three women on the planet has been beaten or raped. Fuck climbing. Focus on real problems. 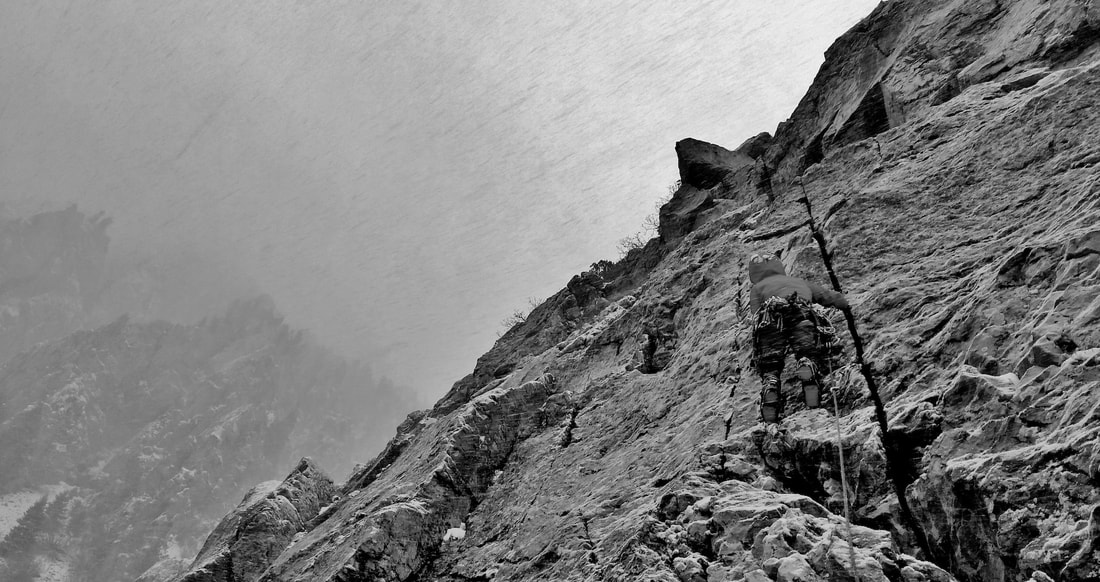 But I am 100% wrong. I’ve got it completely backwards. I can’t change the world, as much as anyone ever tried to get me to think I can. I’m one broken person railing against the same assholes selling the myth of meritocracy. This position is as futile as getting home before sunrise. This makes climbing’s flaws important, the futility irrelevant. The vocalist asks me directly through the sound system: If you don't do it, who fucking will?!

Climbing used to be everything I needed it to be, fleeing from the bullshit and suffering and pain and discontent and violence of everywhere else. Others deserve the same, no matter who they are, where they’re from, or what they look like. I can’t change the world, but maybe I can change climbing. Just a little. If there’s even one person who can’t picture themselves in the culture of climbing precisely because of the culture of climbing, then I am compelled to work, to build this other world, where it’s all okay. Not just for me, but for anyone who wants it. The lyrics share the aspiration. Walk alone in the streets at night and fear nothing.

Years later, long after I’ve clawed slumber back into Thursday nights, it's the same story, told to me by another woman, one more of so many similar. A mountain guide is sexually assaulted in her tent by her co-worker. She tells her employer. “We’re so sorry this happened. But we can't put anything in writing or we'd actually have to do something about it.”

I hope there is a special place for them in hell. Fuck you!

Nowhere is safe, certainly not the mountains I once loved. My thoughts jumble again, incoherence rising in lockstep with the tempo of the music, my blood pressure, my racing pulse.
Our nation hijacked by the criminals
We'll never have our dignity
'Til all you fascists are six feet deep.
Later still, I return a phone call to a guide service owner. He needs diversity training for his staff as a requirement for a permit to guide federal land. I ask about the company, the culture, the goals for the training. This is a box to check. They “do fine on diversity” and no one has ever raised a complaint. Which might indicate how much they need the training and a culture shift if no one is willing to bring concerns to management. His clear displeasure indicates the plausibility. I recommend some people, not me, to provide a training. He respects my balls for saying this to him - presumably a man who presumes he is powerful and presumes I should be deferential. "I respect your balls..." – what a fucking weird thing to say. It isn't my genitals that made me candidly assess the company culture, it's my morals: No justice anywhere until we put it there!