To all the Common Climber readers:

Thank you for taking the time to read Dave’s article about my son Brad.  Reading it, I could hear Brad speaking to Dave and I felt him close by.  It is a powerful feeling – this sense that Brad has not left really.
This was just hours after Brad had finished the Muir Wall. I asked a mate, Justin Lawrence, who is a regular photographer on the Big Stone, to give Brad the heads up I would call [Justin later filmed Brad and Alex Honnold on El Niño]. I made the call and on the other end of the line I heard that Californian drool.
​“Dave!”

Good start I thought. Brad culled the formalities and cut to the chase.

I put on my best Californication. “Bro, you are probably on a high right now and your brain is jelly from your bodacious send, but would you like to do an interview whilst your head is still up there?”

There was a pause. Later that evening he got back to me.

“For a magazine that cares about climbers. I want to tell your story, the one about an everyday guy who loves climbing and who is doing extraordinary things freeing big wall routes in Yosemite. I’d like to share out there what you feel when you’ve done em’.

No pause this time. 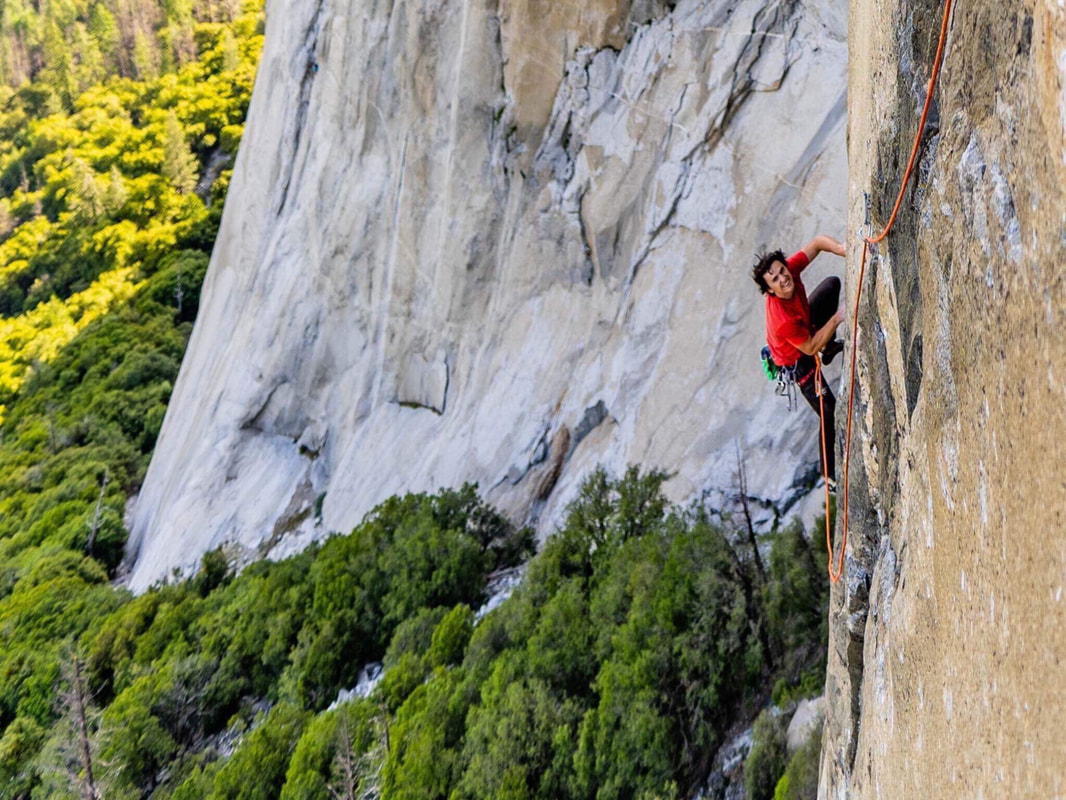 Brad exploring a new link-up on El Capitan, Yosemite a few weeks after he climbed the Muir Wall. Photo credit: Justin Lawrence.
​“When I got off [The Muir Wall] my parents congratulated me and said it sounded like a rewarding and miserable experience. I’d say they were correct for the most part. No one in my family climbs, but I think they’re proud of my passion and drive towards climbing.”

​The reality of being a professional climber was super cool for Brad, but it also meant constant movement. I think he needed time climbing - maybe the soloing in particular - to help his soul catch up.

​“I grew up in Southern California, but today I wouldn’t give myself any single place of resistance [This was obviously a typo, he meant residence but I’ll leave it there for dramatic effect]. I spend most of my time on the road and for the last three years have been making a means as a professional climber.”

I was on video Messenger with him and he was in his Yosemite tent, one with a wooden floor and a bit of order. He was distracted as he talked.

“Sorry Dave I’m super hungry and I knew I had a chocolate bar around here somewhere but I can’t.. [There were sounds of stuff crashing and things moving then...] Cool, I’ve found it. Where were we?”

It seemed appropriate, so I asked him, “So what does Brad do in his spare time and what does a professional climber called Brad eat- other than chocolate bars?"

Brad replied, “That’s a good one. My favorite show on TV is The Office and my favorite food is a tie between burritos and pizza.”

I had to ask about that Gobright donut fetish which was often reported on.  “Na, Im sick of them really.”  That’s a scoop I thought.

Brad had sacrificed the everyday life to live an extraordinary one catching his dreams in high places. I wanted to know what he thought makes a good wall climber and how he got the mileage to do what he was doing - freeing big routes and speed climbing others?

“I’ve been climbing in Yosemite since 2008. It’s been a slow and steady process but I have improved each year as I have gained more confidence. I have climbed El Capitan between 50-100 times in the last ten years.”

Far out I thought. I climbed it once and that experience has kept me sane for a lifetime, but my memory tells that it wrecked me! What these modern masters of stone are achieving at present has been remarkable. Brad’s free climb of the Muir Wall had thirty-three pitches and he did that starting as soon as the sun got off the wall and kept moving until he was done.

I started to dig a little deeper. I wanted to know which climbers he respected. Reading this now breaks my heart...

“I have always looked up to Alex Honnold and I try my best to follow in his footsteps.”

Reading this now, I need to pause.

“I also look up to Tommy Caldwell. In my opinion both Tommy and Alex are the most adventurous climbers out there.”

Yosemite is a beautiful place. She had Brad the moment he first laid eyes on her. When he laid his hands on her he felt complete. “El Cap is something else. She just fills my brain every time I look at her. She and I have got to know each other pretty well.”

To keep pushing the envelope you need to have something that keeps drawing you back, the Muir Wall was one of those routes for Brad.

“It seemed like the next logical step after doing El Corazon (a Muir Wall Free Route grades 5.13b and consisting of 35 pitches) in one push last year. Alex Honnold is the only other person to climb the route in a day. I thought it would be the perfect challenge to be the second person to do it.”

Yvon Chouinard and TM Herbert first aided the Muir Wall in 1965, as they thought it was a good looking line. They named it after the High Sierra environmentalist and poet, John Muir, a fitting name for a climb at this place. I asked Brad what he thought they would say to him knowing he had freed their route?

“I guess I hope that they would congratulate me. I’d thank them for finding and establishing such a fine line.”

To free climb long routes and at pace is hardcore, but to do consecutive demanding pitches various in nature requires an X-ray understanding of what the route features and how to approach each pitch. Brad thought the Muir Wall had some doozies.

“The hardest pitch of 13c was at the very top. I was super tired and sore when I got on it and it was dark, so I had to do it by headlamp.”

Stop - hammer time. Read that again. He also had moments of doubt. ​ 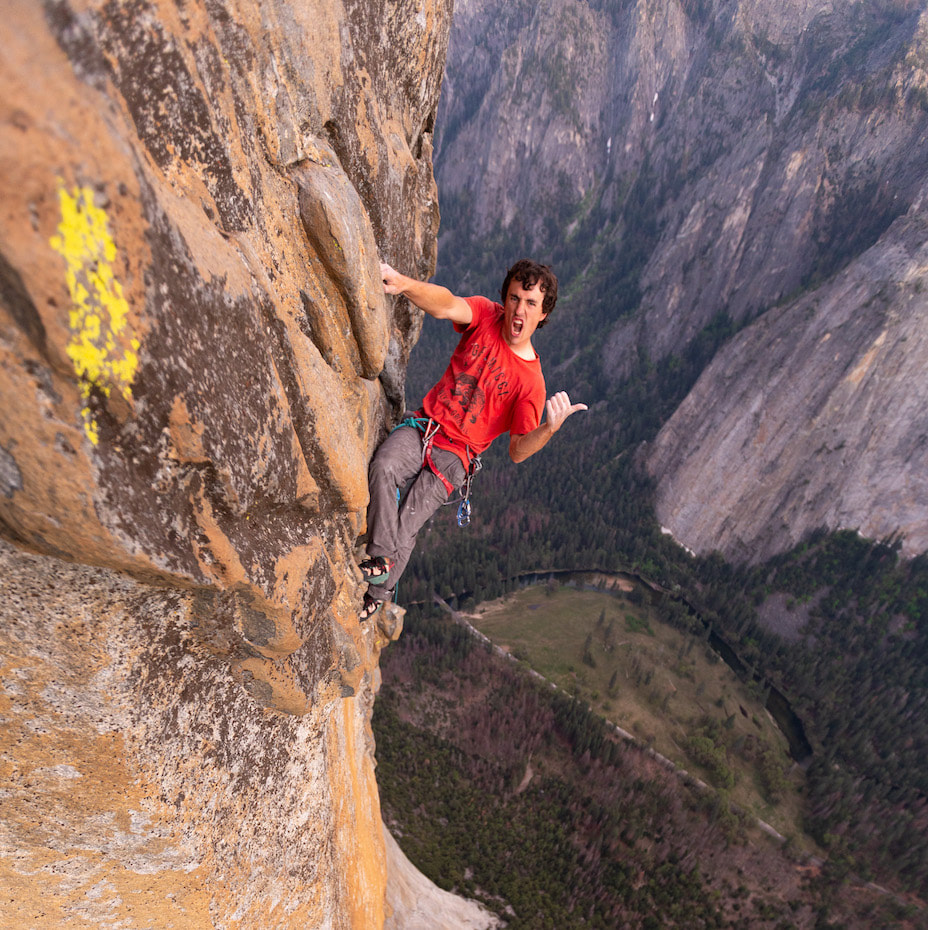 Brad in Yosemite. Photo Credit: Samuel Crossley
“Yeah, that 13c pitch at the top was nuts and even the 5.12 pitches leading up to it gave me trouble. The Muir Wall was consistently more difficult than [when I freed] The Salathe and El Corazon.”

Brad spoke about Speed. What’s that all about? It was another pinch of salt to add to his menu at Cafe La El Capitan. Brad loved going fast, right into the danger zone.

“I climbed the [Muir Wall] route in 17.5 hours. It was the second fasted time after Alex Honnold who freed it in 12.5 hours. Overall the climb was as hard as I expected.”

Brad hurt like any athlete who gives their all. We now know he was mortal and mortal combat does damage. Brad was forthcoming on sharing what his Muir Wall push did to him.

“My fingers and toes feel the most worked, which is usually the case with El Cap routes. After two days my body feels like it’s recovering but I usually don’t climb for a further couple of days. I always do a lot of stretching after long and hard climbs. Soaking in a hot tub is also nice, if you can find one.”

Not many people can walk up to a big wall and cruise it. Brad wanted to give some tips on how to go about it.

“Start off on small stuff and work your way up. You’ll learn efficient technique in the process. Move up slowly and enjoy it.  That’s how I have done it.”

It took a couple of days to work through our text-a-thon and we fleshed out other bits on the phone. Brad was polite and forthcoming throughout. He did share with me that he had not worked the media thing out. It was more noise to him than anything else. He had been watching the rise of Tommy Caldwell, Kevin Jorgeson and Alex Honnold. I did sense a bit of envy that they could do the show business better and cleaner than him, but that was OK. He did share his thoughts of the media.

“It all just feels like work. They want a lot but don’t give much in return.”

There’s a message in that.

I think he liked going out alone to escape the noise. The place he could truly find himself was up there, somewhere, sussing out the next sequence.

Brad enjoyed regular seasons up in Squamish climbing, but being from down under I wanted to know if Brad would come to Australia? I teased him with some shots of the Totem Pole in Tasmania and some routes I had put up recently in Hobart.

“Those climbs look rad Dave. That rock looks solid.”  I think Brad needed to get out of the Valley more. My climbs are barely rad and the Totem Pole is not solid!  It does give an indicator of the positive nature of the man and the stoke he had for others, whomever you were and whatever you were climbing.
A Mom's Memoir
(By Pam Gobright)

I believe God wants us to have a full and beautiful life and the way to that life is to love creation and to love each other.  The climbing community understands this simple fact so well.

This enormous grief I am feeling.  This is Love.  It is my love for Brad and his love for me released out of his physical body as big as all the wide and wild world you will explore in your lifetimes.   It is God’s way of making me understand that death does not end us but makes us even more.

May God Bless your journey.  May he carry you in difficult times, reminding you how strong you are.
May he fly into your heart on the glorious days of achievement giving you full awareness and gratitude.

And may Brad – forever young, having lived life to the fullest,  May he stay beside me and you as all the days of our lives fly by, reminding us of all we had and assuring us of all we will have ( in no time at all really) in the Kingdom of Heaven.

Stay safe out there.  Remember you are loved.

Need support overcoming grief or want to help others who have lost a loved one in climbing? Go to:
American Alpine Club Grief Fund