By Paul Pritchard
“Rock!” Eli called down without a hint of panic in his voice.

A moment later a block the dimensions of a house brick crashed on the boulder beach a couple of body lengths from me.

I silently pondered whether I had passed on some of my nonchalance to my son.

For a moment I dwelled upon ‘nature versus nurture’ and ‘genetic memory’. On how it has been proven in laboratory experiments that mice whose great grandparent underwent trauma are fearful of the very same through some kind of genetic signature. Could Eli have inherited my skill for remaining calm in situations that would produce hysteria in others. Could Eli have inherited my penchant for survival. Well, at least we were wearing helmets.

I was holding my son's rope on a rocky shore at the mouth of the Derwent river in Tasmania. If you look out and south, across the wild Southern Ocean, Antarctica really isn’t that far away.

The day had finally arrived when I could safely take my boy climbing.

I had waited a long time for this moment. As a D.A.D. (dad with a disability) it takes a whole lot of planning to do anything adventurous with your kids. I have a brain injury, you see, after a climbing accident twenty-two years ago. I have a condition known as hemiplegia. My right arm doesn’t work. I can only walk because I have learned to stack my pelvis, femur and tibia/fibula atop of each other in a finely balanced, constantly moving, house of cards trick. This trick took years to perfect and a whole year in the hospital.

I had long looked upon other dads doing physical stuff with their sons or daughters with a hint of envy. However, this only pushed me to go on more adventures with my kids such as wild camping, mountain walking, kayaking, caving and climbing. When the children were very young it was always a complete mission to take them with me. I would have to put up the tent and cook dinner or untangle a birds nest in the fishing line with only my left hand, all the while balanced on one leg. But it was well worth it, for their sake and mine.

I am also used to having periods of complete exhaustion when I push myself so hard that my whole being rebels. But you only have one life - and children grow up so fast -  I just want to spend as much of my time with them doing as many interesting things as possible.
​
He slipped one shoulder strap off then struggled to thread the next strap over my spastic elbow. Once off, this allowed me to get to my feet, frisk myself for injuries - there were none - put my bag back on and stumble onwards to the crag.

Eli’s eyes scanned up the wall counting the bolts. He counted seven. However, there is a much written about spindly tree at half height.

“Take a sling for that tree,” I offered in the spirit of fatherly advice.

There was a pair of Chinese students fishing at the base of the climb. They were pulling out Leather Jackets and cocky Salmon from the waters. They looked up the cliff and back to us and asked in halting English, “you go up there?”

Eli and I nodded.

Eli squeaked on his rock shoes and stepped off the ground. He began climbing, full of confidence, seemingly without fear. I recognised myself in his movements - scrunching crumbs of rock off with curled fingers, pulling up and blowing on the hold, sweeping away excess dust with the breath. The limb movements, certain and secure. No hesitation, or at least very little. This lad knew how to save energy for the moves to come. Not necessarily the next move. There is a knack of reading the rock and locating the cruxes before one sets off, but also constantly whilst climbing.

He slung the famous tree, pulled up on it’s horizontal trunk, but forwent standing upon it (out of respect I supposed).

Watching my boy climb was like stepping into a time machine and hovering across from a wall in North Wales and watching myself climb thirty years ago. It was like holding a mirror to the cliff.

When the rock came crashing onto the boulders from twenty metres above, I didn’t flinch, and neither did he. Soon enough he was at the lower-off. He knew the threading drill - I had taught him that at ground level. And he lowered down all smiles. 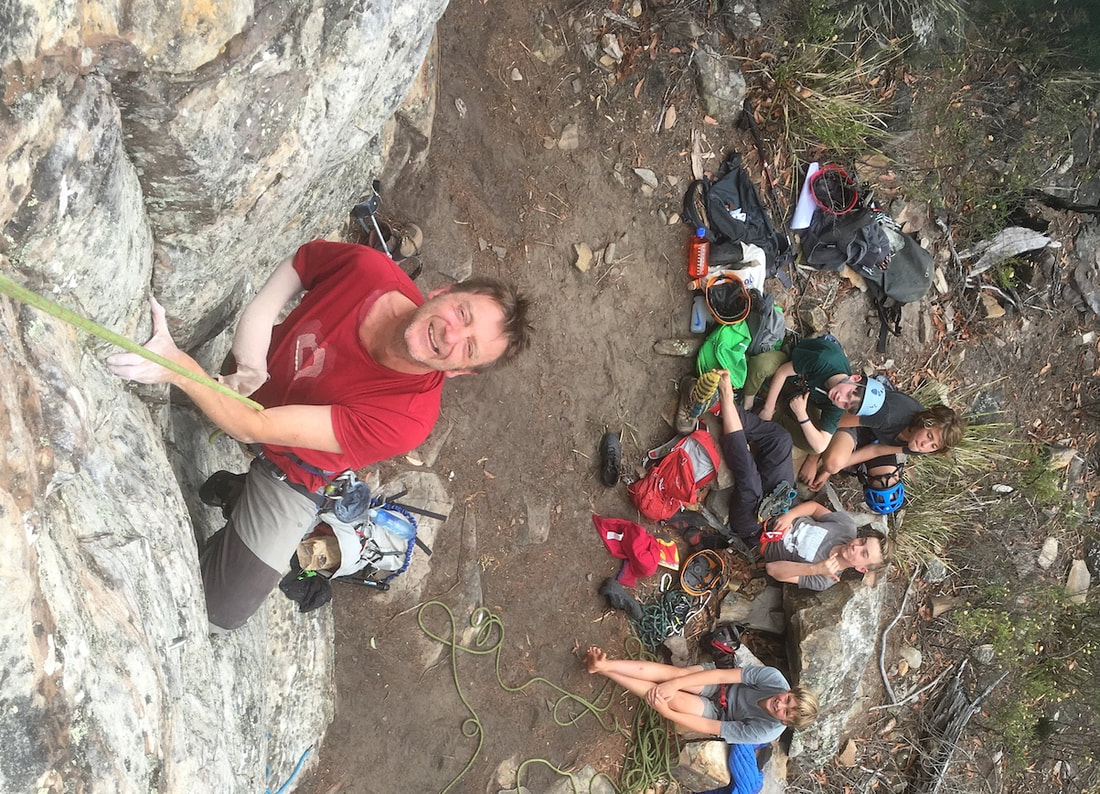 Paul climbing with a gang of climbing boys below.
​It was the first time I’d followed, or attempted to follow, my boy up a rock climb.

He was well practiced at belaying so I didn’t worry when I fell off. There were no ‘what ifs?’

​Following Eli up that climb was as though I was passing on a mantle (coincidentally Elijah passed on the mantle to Elisha as he was plowing a field in Book I of Kings). I knew I still had work to do to instill in him the ways of ‘The Mountain’ - not simply how to be safe on a climb, but what he could learn from such a life. If he approached the mountains mindfully he would learn determination, patience by the bucket load, and ultimately, true freedom.

He hauled me up to the infamous tree, but my right elbow and knee were bleeding.

I could not ascend any higher.

Your turn my boy.