Louise Shepherd is a 61-year-old guide and guardian of Mount Arapiles in Australia. She has lived in the area throughout her climbing life. Louise began climbing in 1978 and still climbs to this day – even through radiation and chemotherapy for a sarcoma cancer in her arm.

Louise’s resume includes being the strongest female climber in the world in the early1980’s, the first female ascent of Separate Reality in Yosemite, and establishing string of hard, often on gear, first ascents in South Eastern Australia.

Louise has been a leading figure in the Australian climbing scene and still climbs and guides at her home, Mount Arapiles. Common Climber chatted with Louise about her climbing career and the people she has met along the way.
​
Q: What makes Louise happy today? What makes you laugh!

I smile when I see the budding flowerheads of leopard orchids, mosquito orchids and chocolate lilies at my favorite haunts at Arapiles.

Last week, Brigitte Muir and I and some locals assisted Professor Brian Timms from UNSW sample the biota in the gnammas (rock pools) on top of Arapiles.

What's so exciting is that it's highly likely we have found a new species of shield shrimp! It's a joy to see the 86-year-old Prof carting nets and jars across rocky terrain with the eagerness of a teenager.

What made me laugh yesterday was watching my usually dignified 8- and 10-year-old niece and nephew screaming whilst being chased around by my naked 3-year-old neighbour wielding a fly swat.

Q: Rock climbing has been a bedrock in your life. How did that begin?

I started climbing 41 years ago when Kym Smith, my boyfriend at that time, suggested we try it. We knew nothing about climbing. We bought a plastic yellow rope from a boating store and walked up Elephant’s Hide in the Grampians trailing this yellow rope behind us. We got to the top and tied the rope somehow around a boulder and went hand over hand down the back of the boulder, burning our hands in the process.

Eventually we found a guy in the Adelaide suburbs who sold proper climbing gear. This was in the late 70s before there were any climbing retailers in Adelaide.

The yellow rope was re-appropriated as a washing line. 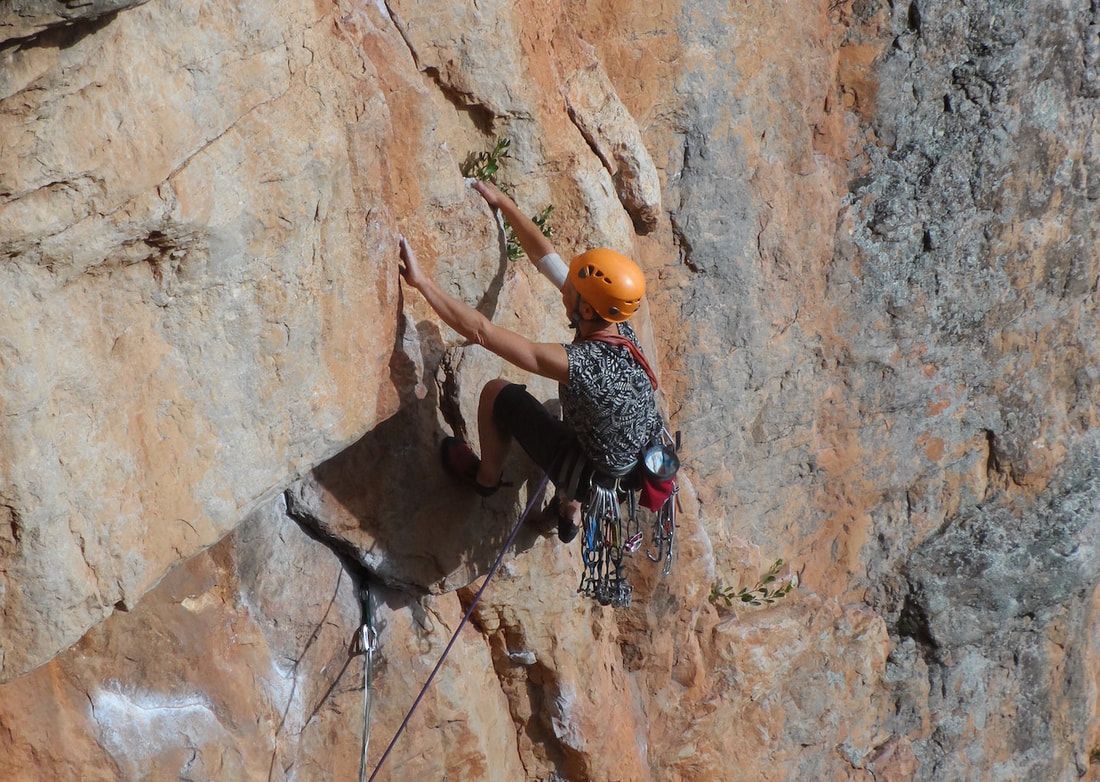 2018: Louise on Tannin (19/5.10b), a traditional climb in Mt. Arapiles, Australia. The bandage on her arm was placed there following radiation to treat a sarcoma cancer prior to surgery.
Q: Can you give us a recollection of your hardest ascent and the time it was and who you were climbing with?

Procul Harem was hard (26; 5.12a); it took me 3 days. But once I got the crux, which is quite low on the route, I didn't fall off the upper section, which claims a few blow-outs apparently. I remember thinking the Enduro Corner of Astroman being one of the toughest leads I'd done. I'm fairly sure that was with Dave Fearnley, but I've got a crap memory. Denim was also memorable. I fell off the bottom roof which is not the crux, went back down and then flashed it next try.


Q: Where were the places you climbed around the world. Any route from one of those trips stand out?

I travelled overseas a lot in the 80s and a bit less in the 90s, and these days a lot less, at least overseas. My last overseas trip was to Squamish in Canada four years ago. The best route I did there was Angel Crest, a 12 pitch grade 21 (5.10d) arete. It took us 12 hours!


Q: Who did you climb with over there?

Donald Poe who is an ex-client. I guided him on and off for 13 years, taught him to lead and so on. I'm risk-averse these days so he's a very safe climber!


Q: In your early career was there any misogynist behaviour around you and if so how did you deal with it.

There probably was a bit of sexism here and there, but I don't remember any stand-out incidences. It helps to have had the respect of the broader climbing community.

Q: Who is Louise Shepherd today? What does she do?

I'm 61 and still climbing, albeit at a rather bumbly level these days. I went climbing this morning!

These days I climb for several reasons - health, social, being outdoors. I'm still guiding and instructing at Arapiles. I take a few of the local kids climbing - mainly my 10 year old nephew Joseph and some of his mates. I travel, almost entirely within Australia these days.

I support my 86-year-old mother who complains endlessly about being a physical wreck but she still lives independently and has all her marbles! I have chooks and a veggie patch and live in a share house. I treasure living in this community of Natimuk, I feel very lucky.

​
Q: The Grampians and Arapiles access issues is a serious challenge. What would you advise we do as a climbing Community?

I think we as a community need to take a breath and respectfully listen, learn and take the time to hear the others' perspectives. We need to go through this process before engaging in dialogue. We need to critically re-examine our practices and subject them to scrutiny.